We don’t seem to acknowledge it that often but a lot of the staples of mens fashion come directly from the world of nautical workwear. From boat shoes to pea coats these classic icons were adopted from mariners who needed something warm and durable to protect them from rough weather and harsh seas.

There’s no better example of the transition from a tool of the sea to landlubber’s fashion staple than the dive watch. Originally designed to help divers avoid the bends, dive watches can now be found on wrists that will never see water deeper than a bath tub. And that’s okay! Dive watches become popular for a reason; they’re easy to read, durable, and can give a sleek feel to even the stuffiest outfit.

Recently Seiko released a reissue of their timeless 6309-7049 dive watch; the SRP777. Beloved by soldiers and divers throughout the 70s and 80s and dubbed “The Turtle” by vintage Seiko collectors the 6309 series is one of the best examples of a workingman’s dive watch ever produced. While there’s no denying the retro looks of the modern Turtle, Seiko added in enough modern technical updates to the SRP777 to make this a worthy successor to the 6309. 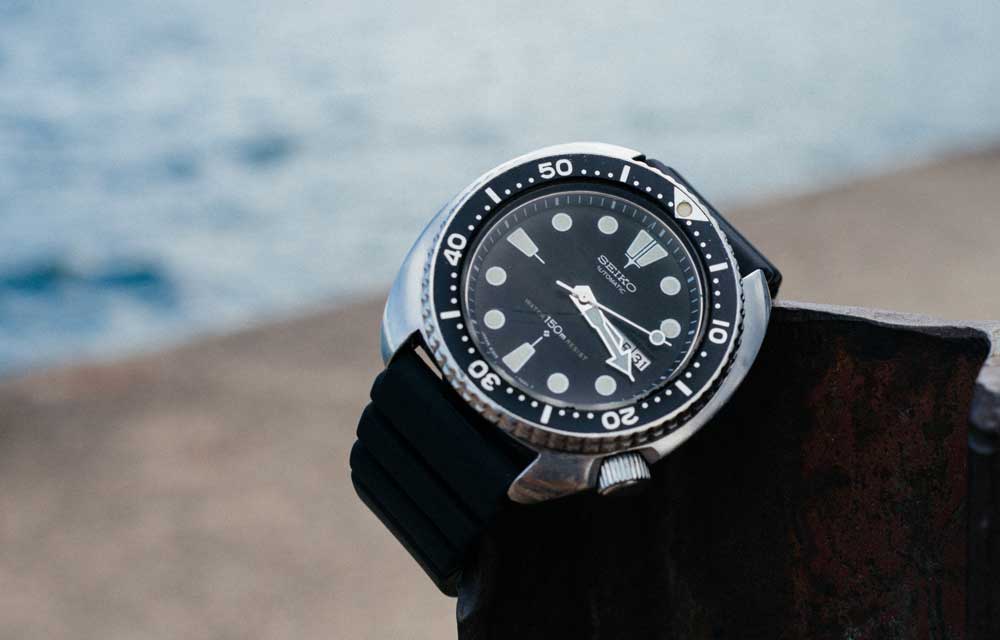 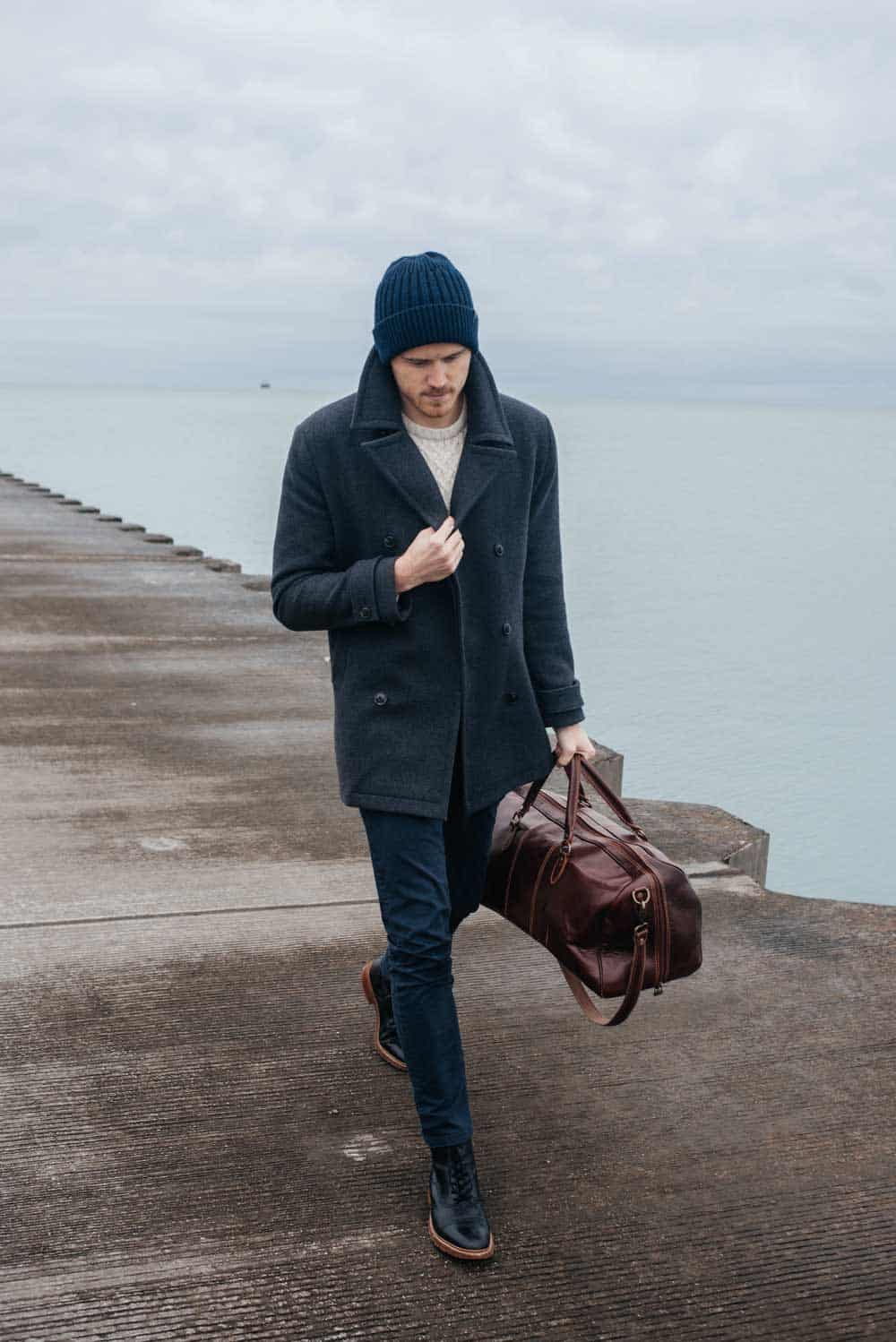 As part of Seiko’s Prospex line of professional watches the SRP777 has a few updates on not only the original Turtle but also the SRP777’s modern cousin in the Seiko family, the SKX007. While the average person won’t be going to 200m of water resistance any time soon, the added 50m of WR over the original Turtle’s 150m gives a bit of peace of mind if you’re going to be abusing the SRP777.

The biggest improvement over the original turtle and SKX007 is the use of Seiko’s 4r36 movement. This automatic, hacking and handwinding movement is a step up from the original Turtle’s 6309 and SKX007’s 7s26 movements which feature neither.  Add a 41 hour power reserve and you’ve got a watch that will be easy to keep time on even on the days when you choose not to wear it. 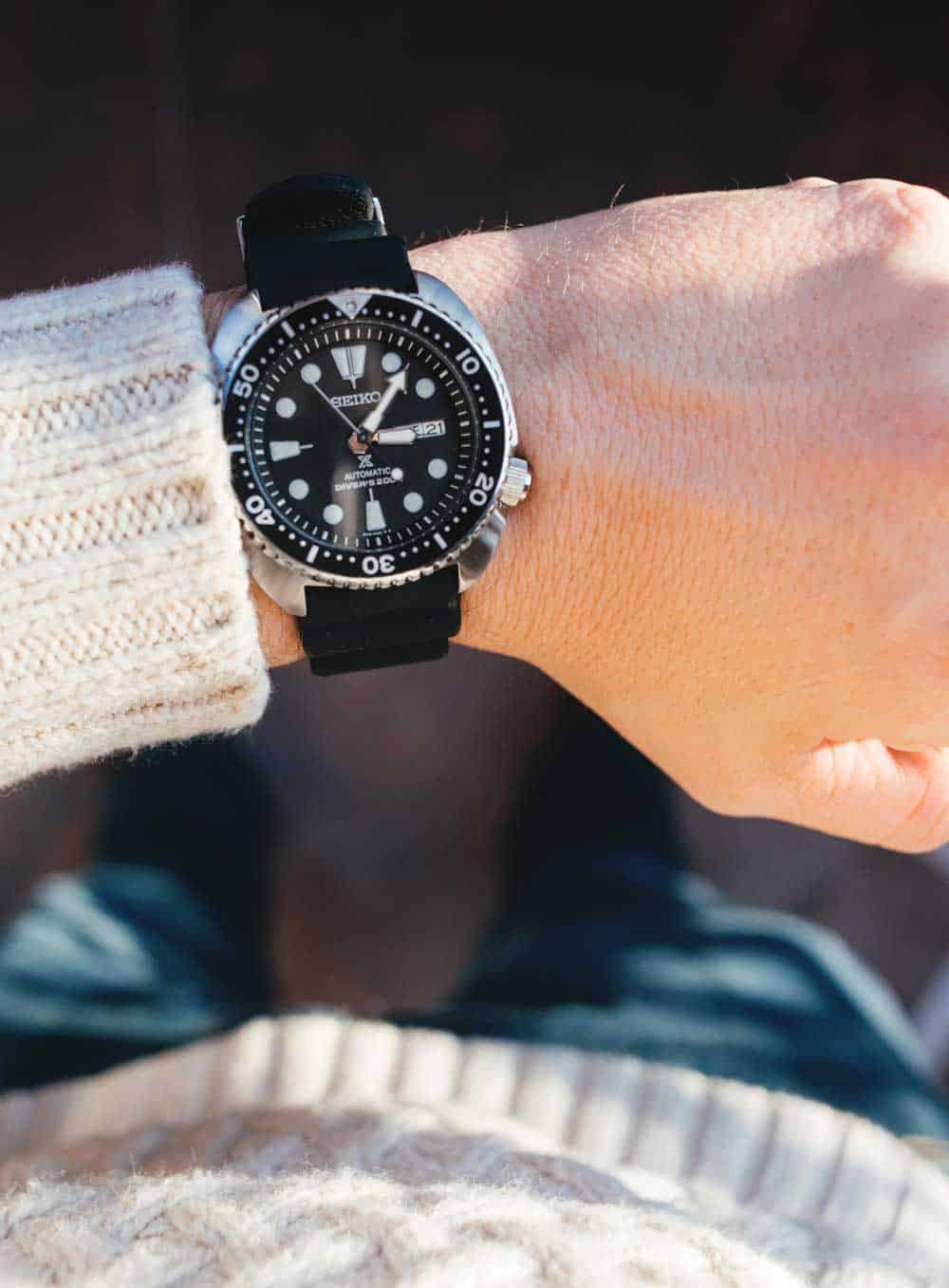 The other big improvement over the original is with the included rubber strap. Made of incredibly comfortable silicone rubber it has a big hefty steel Seiko branded keeper and tang buckle that give off a premium professional look. As with most of Seiko’s rubber straps it is a bit long in order to accommodate being worn over a wetsuit. This long strap sometimes looks ridiculous on someone with smaller wrists like mine but the big stainless steel keeper tucks the strap end close and maintains a sleek look. One additional touch that I appreciate is drilled lugs which make changing the strap an absolutely painless process.

Like the original Turtle the cushion case of the SRP777 makes it seem bigger on paper than it actually wears on the wrist. At 43.3mm it’s slightly bigger than the original Turtle’s 43mm case size but the difference is so small as to be negligible.

If it’s not obvious from the review so far I absolutely love this watch. However, one major oversight made by Seiko is in the choice of material for the crystal. For a professional watch intended to take some abuse the lack of a sapphire crystal is noticeable. Seiko insists that the proprietary Hardlex crystal on the SRP777 is incredibly durable but in my experience nothing compares to the scratch resistance of sapphire.

The SRP777 is a worthy reissue of a classic vintage watch and would be a choice for anyone who needs something that can take whatever you want to throw at it.

When it came to styling an outfit for this watch I kept coming back to the notion that so much of my wardrobe has been inspired by the sea so I went all out with it. 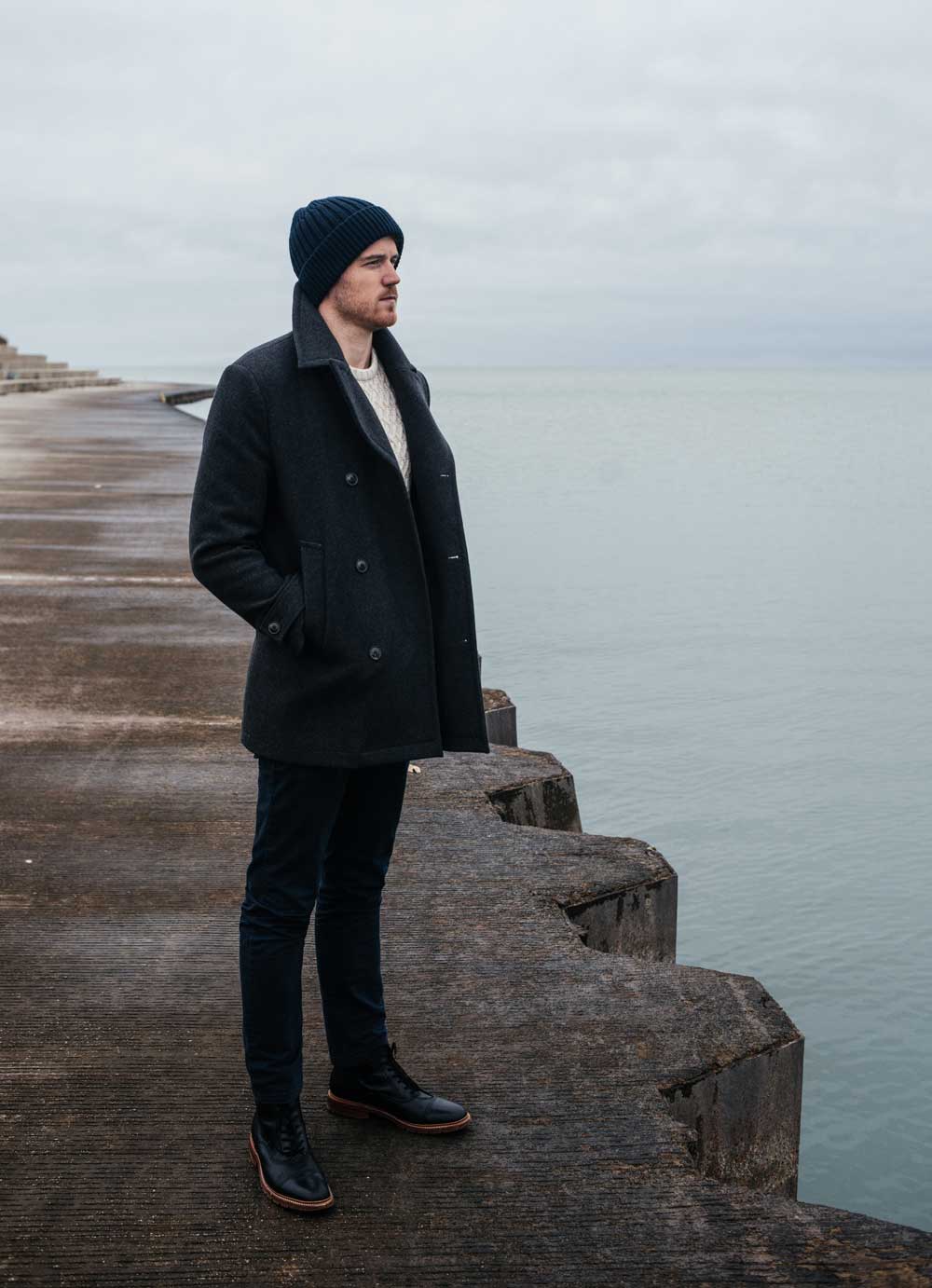 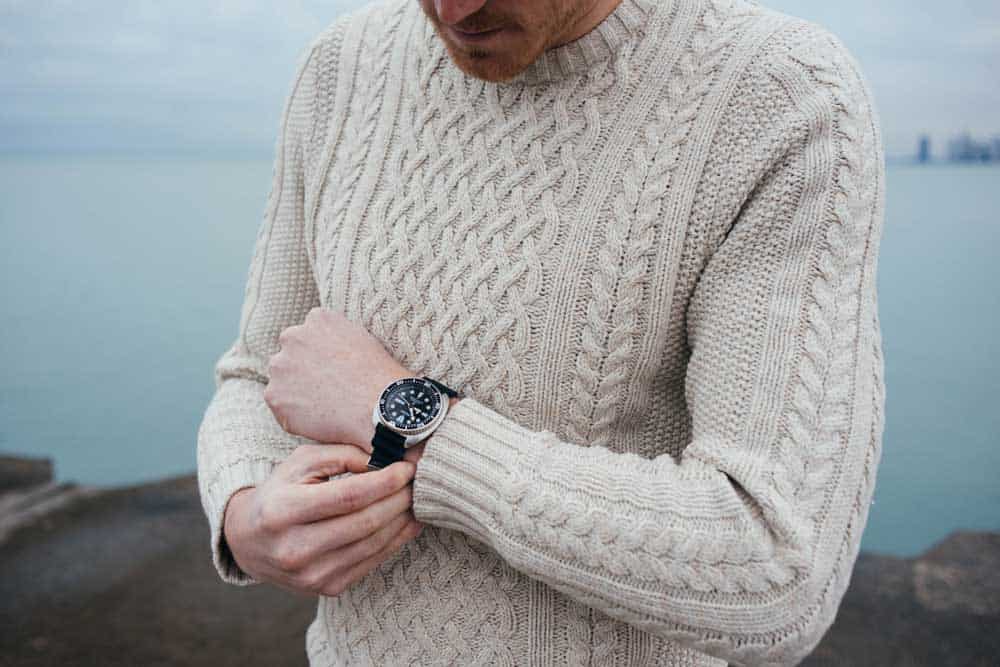 The classic aran fisherman sweater has been adopted by everyone from Steve McQueen to Martin Freeman’s John Watson. It’s a classic winter look that can be dressed up or down depending on what you pair with it. As part of their Goodfellow line Target has released their take on this classic. While not made of the traditional wool the Goodfellow aran sweater makes for a great nautical inspired layer in the late Fall and early Winter. Pair it with a peacoat, watch cap, and dive watch and you could pass for someone about to hop on the next tramp steamer without looking like you’re wearing a costume.

Also check out our last Starting Time, that Timex watch is now available on NewEgg for only $36!

Casual StyleFall StyleSmart CasualStarting TimeStyleThe GetupWinter Style
Getting the perfect fit right off the rack is like winning the lottery. Whether you wear suits or selvedge denim, this guide demystifies the process of tailoring and alterations.
Discipline is a skill anyone can learn.
Cutting through the confusion: A breakdown of common knife terminology.
Did You Miss These?
We're not telling you anything new when we say we all eat out too much. The bill is always higher than estimated, and we feel stuffed to death after. We'll prove to you it's a bad deal, and give you 4... [more]
The shared sensation of anxiety during an uncomfortable moment...it's all in your head.
Re-take control: Anxiety can be all consuming but there are real ways to overcome it. And you can start today.
You don't have to be a traumatized father fighting a fungi-based zombie apocalypse to wear this jacket.
We've researched the best men's winter coats, based on material composition, product rating, and price.
Life can be overwhelming - Here's a proven method used by fighter pilots to make smart decisions fast and stay on top of it all.
And how to build them in under 30 days.
Do these now to keep your style strong and simple.
If you want to know how some rich actor gets in amazing shape, you're in the wrong place.