Robert J. Flaherty is probably one of the most influential filmmakers of the early days of cinema. His documentaries “Nanook of the North” and “The Man of Aran” helped to set the standard for what a documentary should be. The only problem is that they were fake. Flaherty was a brilliant filmmaker with an eye for dramatic framing and storytelling. But while his subjects were all largely who and what they claimed to be, most of what was depicted as part of their daily life was fictionalized for the documentary. (Flahertyʼs work was brilliantly parodied by Bill Hader and Fred Armisen on the first season of “Documentary Now,” which I strongly recommend watching if you canʼt bring yourself to sit through a few hours of 80-year-old, mostly silent film footage.)

If you are interested in watching the original “Man of Aran” itself, give the remastered Criterion version a shot with a soundtrack by English indie band British Sea Power. The modern soundtrack helps gives an edge to the 80-year-old film. Much like the film which shares its name, Aran sweaters have quite a bit of misdirection behind their history and marketing. The success of “The Man of Aran” led to a heightened interest in the products produced in and around the tiny Irish islands. Anything that was viewed as “authentically” Aran was in high demand and this included their sweaters. The locals noticed that the more elaborate the pattern on the sweater, the more they would sell. Throw in a story about how those patterns were used for centuries to identify where drowned fishermen were from, and you have a great marketing gimmick. J. Crew still uses this story to sell fishermen's sweaters to this day. However, if you go back and watch “The Man of Aran,” youʼll notice that there are far less elaborate patterns on their sweaters. In fact, they have more in common with the Guernsey sweaters worn by English fishermen since the 15th century than the modern fishermanʼs sweater.

After the success of “The Man of Aran,” fisherman sweaters saw a resurgence in popularity in the early 1960s when they were worn by Irish folk singers The Clancy Brothers on most of their early TV appearances including on “The Ed Sullivan Show.” These sweaters became so synonymous with the Clancys that when the Coen Brothers released their homage to the early 1960s New York folk scene, “Inside Llewyn Davis,” the Clancy analogues are even decked out in the fisherman sweater. In subsequent years, even Steve McQueen made the Aran sweater his own (as he tended to do) by sporting a particularly well-textured one in “The Thomas Crown Affair.” 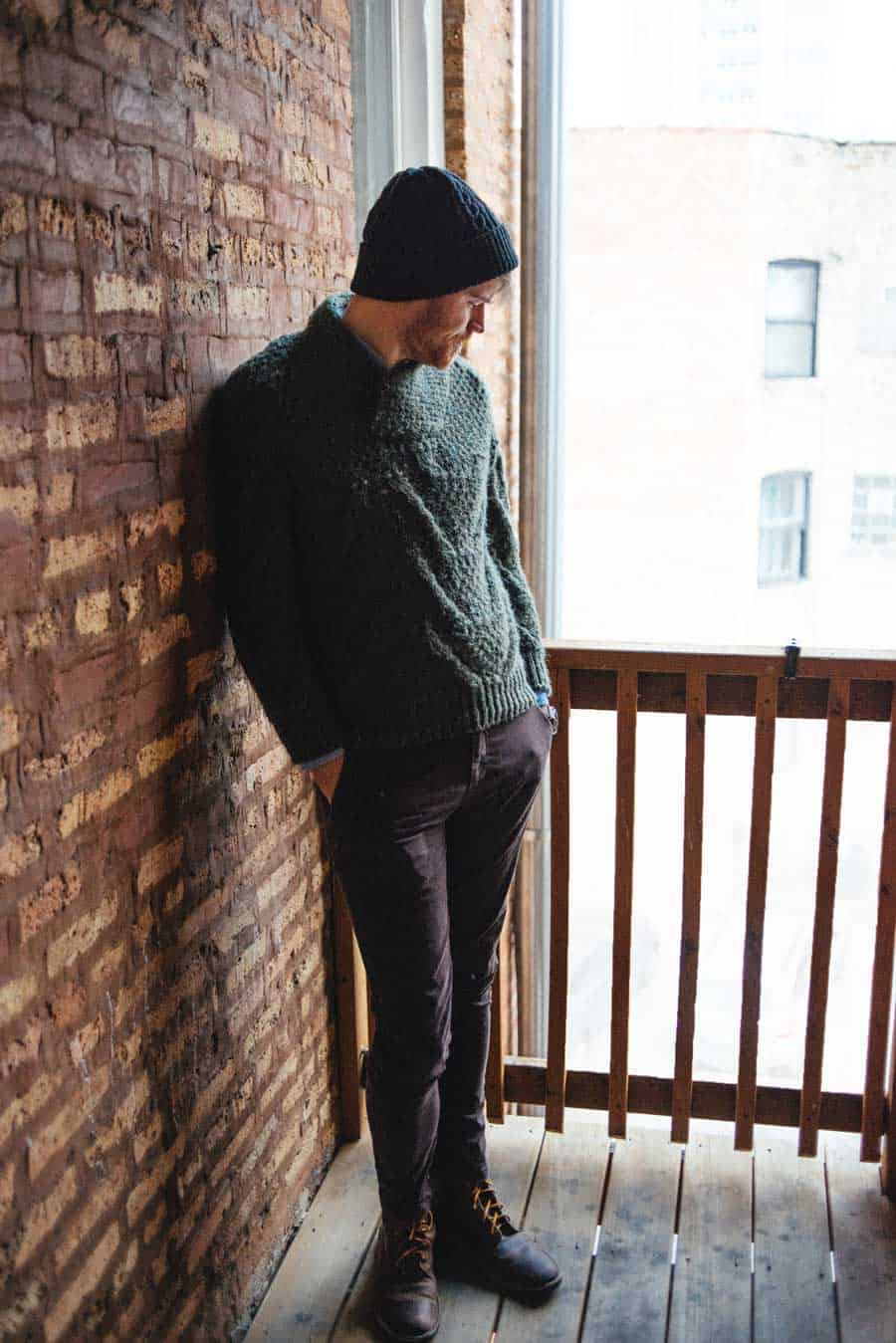 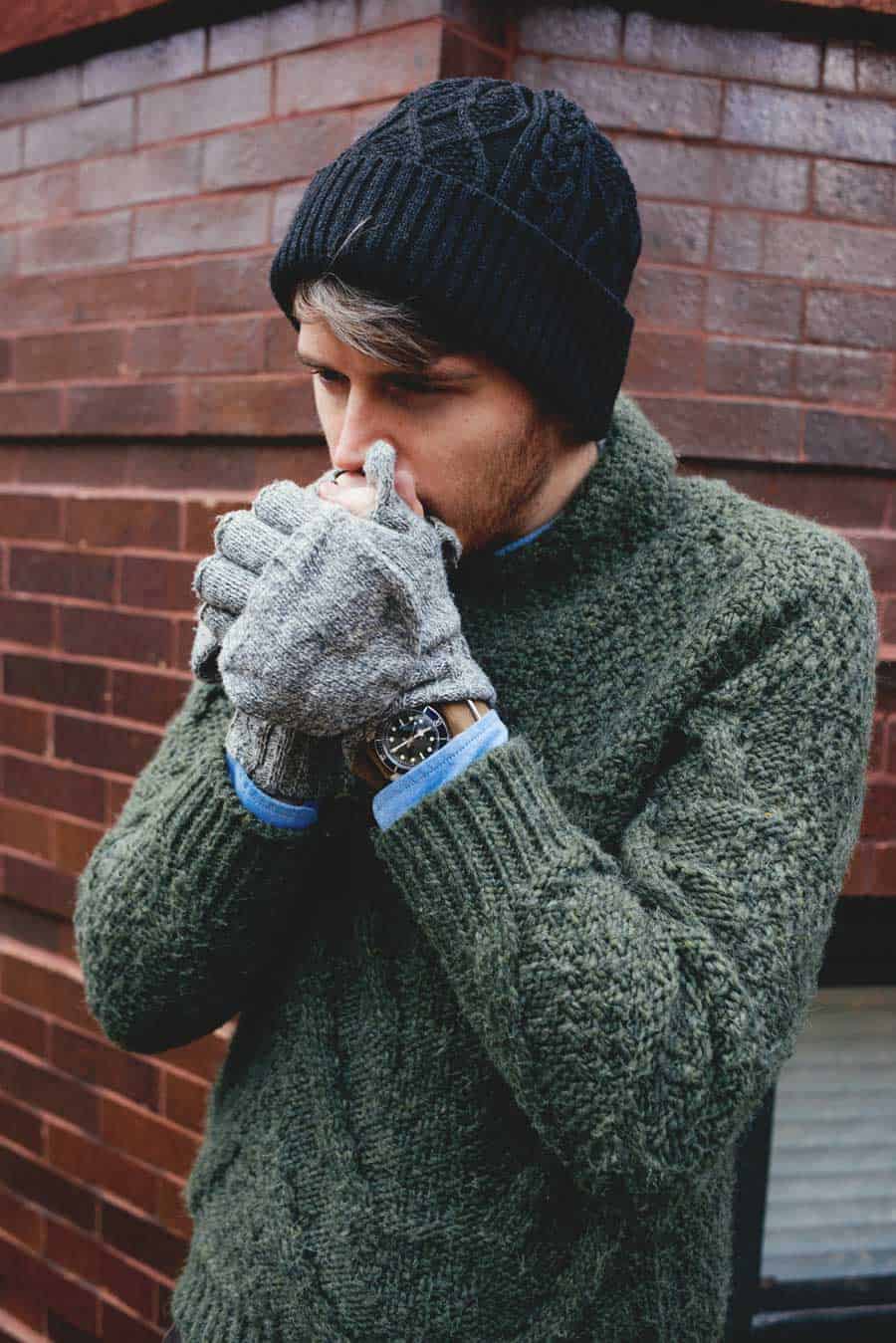 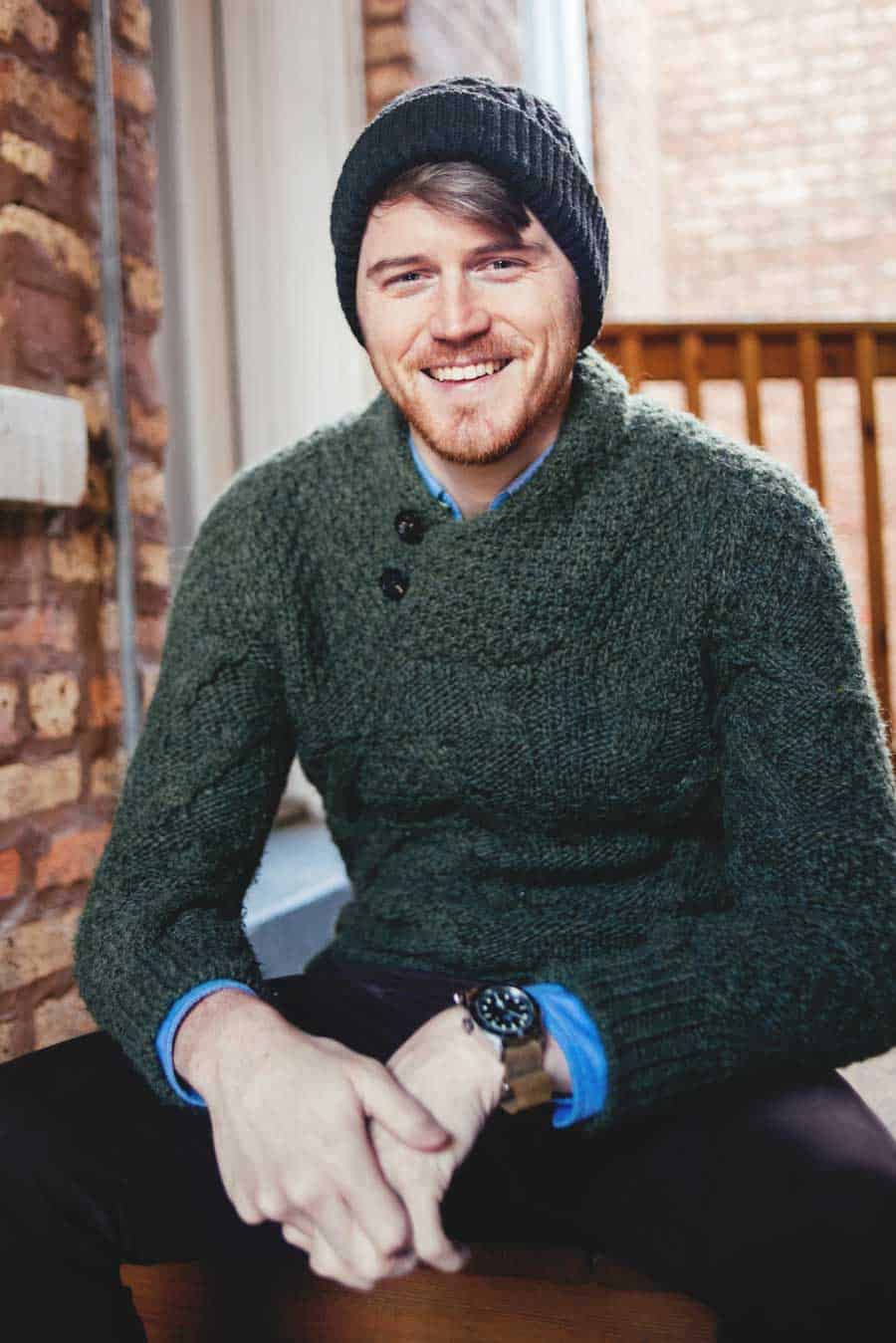 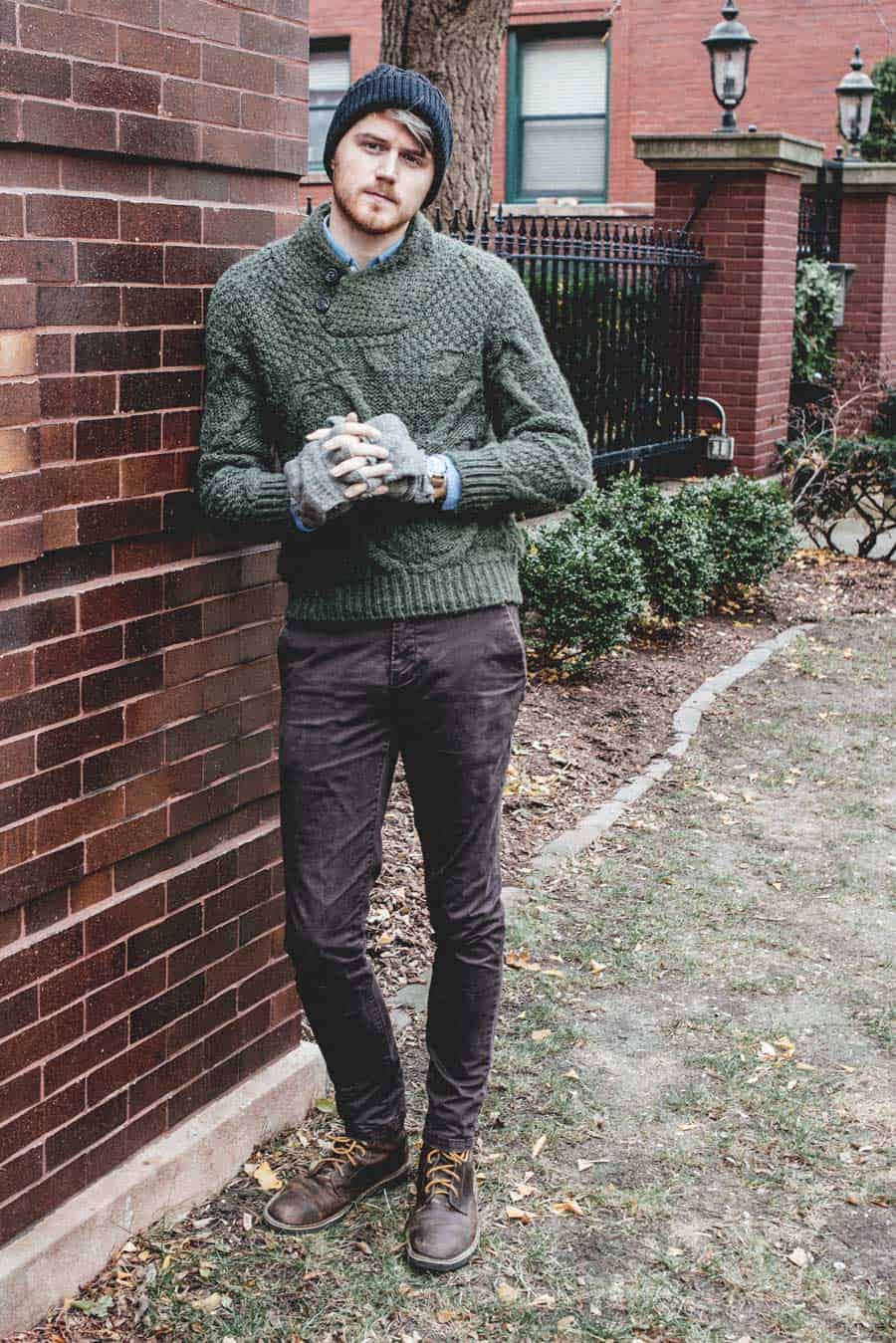 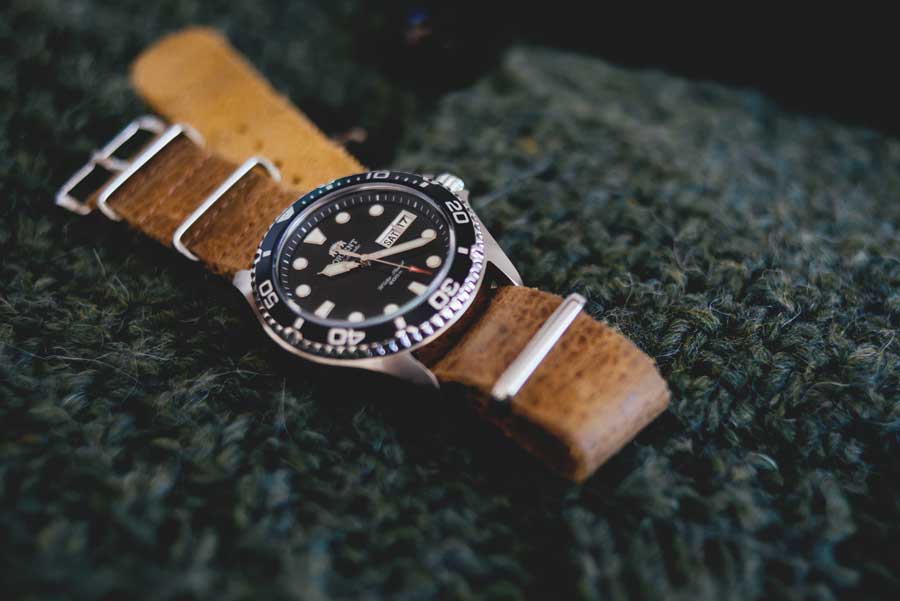 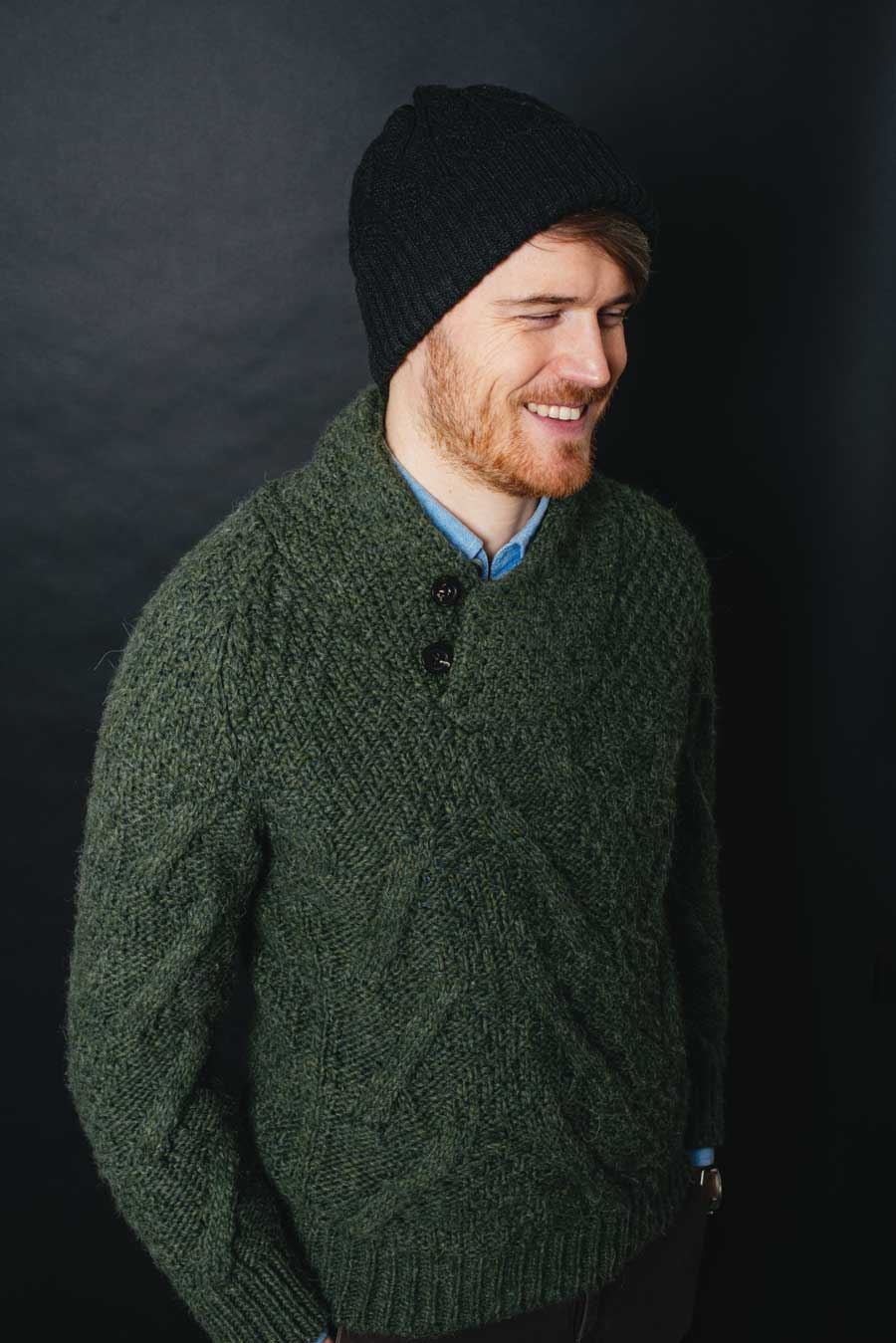 So the Aran sweater is used more as a shorthand for a nautical look rather than being “authentic” (whatever that means now). That doesnʼt mean you canʼt wear one yourself if you like that fisherman look. Worn well, it can impart a rugged look to an outfit without losing a sense of refinement. If itʼs good enough for Steve McQueen, itʼs good enough for me.

Pairing it with a similarly-patterned hat could be potentially tricky, but I think we managed to pull it off here. The darker color watch cap helps to hide the pattern and make the outfit a bit more subtle. Overdo the pattern, and you run the risk of looking like your grandmother just got a new knitting pattern that she is trying out on you. Wear it right, however, and it adds the hardworking-but-refined feel of the fisherman sweater.

A robust dive watch like the Orient Ray II can take just about any abuse you throw at it—including the cold weather—and still keep time while looking good with a nautical feel.

Check out all of the looks in our Menswear at the Movies series!

Fall StyleLive Action GetupMenswear at the MoviesSmart CasualStyleThe GetupWinter Style
Getting the perfect fit right off the rack is like winning the lottery. Whether you wear suits or selvedge denim, this guide demystifies the process of tailoring and alterations.
Discipline is a skill anyone can learn.
Cutting through the confusion: A breakdown of common knife terminology.
Did You Miss These?
A simple, smart survival method for creating a cooking surface hot enough to boil water.
Carolina or St. Louis? Brisket or Pork shoulder? This summer, navigate the maze of sauce styles, meat cuts, and cooking methods of barbecue.
Small, easy, and massively meaningful.
You don't have to be a traumatized father fighting a fungi-based zombie apocalypse to wear this jacket.
We've researched the best men's winter coats, based on material composition, product rating, and price.
Life can be overwhelming - Here's a proven method used by fighter pilots to make smart decisions fast and stay on top of it all.
And how to build them in under 30 days.
Do these now to keep your style strong and simple.
If you want to know how some rich actor gets in amazing shape, you're in the wrong place.