Why People Don’t Have What They Want: 12 Common Traps to Help Diagnose Stagnation

Why People Don't Have What They Want: 12 Common Traps to Help Diagnose Stagnation

Feeling stuck? Spinning on your wheel but not going anywhere? Identifying with one of these may get you moving again. 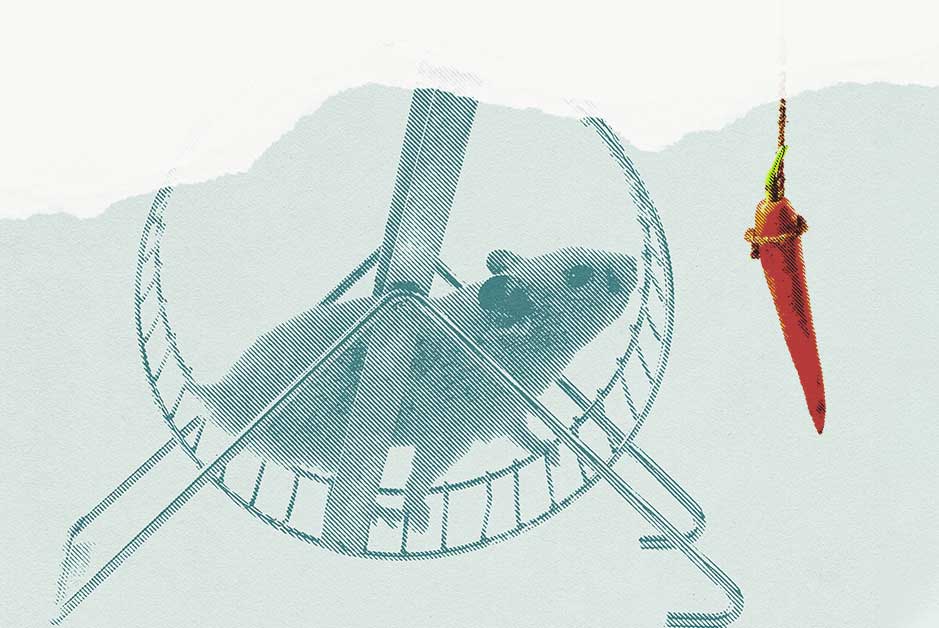 Being a writer means putting yourself in a chair in front of a keyboard. Certain careers thrive on networking events and connecting with new people. Getting dates requires meeting people out and about, or participating actively in app dating. Achieving a desired physical fitness goal requires getting yourself to the gym where you exercise.

Most times, the hardest part is getting into position. Once I'm at the gym, I always end up working out, it's everything leading up to that moment that's a gamble.

They wait for optimal conditions to act

“Amateurs wait for inspiration. The rest of us just get up and go to work.” This quote has been attributed to Chuck Close and Stephen King among others and is a great partner to something Pablo Picasso said, “Inspiration exists – but it has to find you working.”

We have to do our best to create the most optimal conditions we reasonably can and then take action. Those lottery-winning “right time” moments may come around once in your life. Don't bank on them.

What people are actually hoping to accomplish by waiting for the opportune moment is to get whatever it is they want to do right on the first attempt with as little pain as possible.

When you choose to act, even when conditions don't seem optimal, the first attempt isn't going to be perfect. It probably won't even be good. But in life as in writing, the great stuff, the things you're proud of, will be created in the editing.

They are unrealistic with what can be done on their own

Nothing can be created or achieved all by yourself – but every endeavor has a different requirement for when that must happen in the timeline. If you're feeling motionless, even though you're doing the same thing that has worked before, you may have reached the point in the curve that necessitates the involvement of others. This may be to follow you (delegation), pull you (trainers, accountability partners, executives, agents/managers), or take over the wheel so you can head in a different direction (experts, consultants, mentors).

Whether you're struggling with something professional or personal, who can you add to the process to jumpstart momentum?

Being a high-earning sales person has a lot of social desirability but if someone doesn't thrive on competition and feels like they're pushing somebody to buy something, they're going to be working against their emotional grain every single step of the way. What could someone achieve if they worked with their innate traits instead of fighting them, because those traits aren't want society glamorizes? 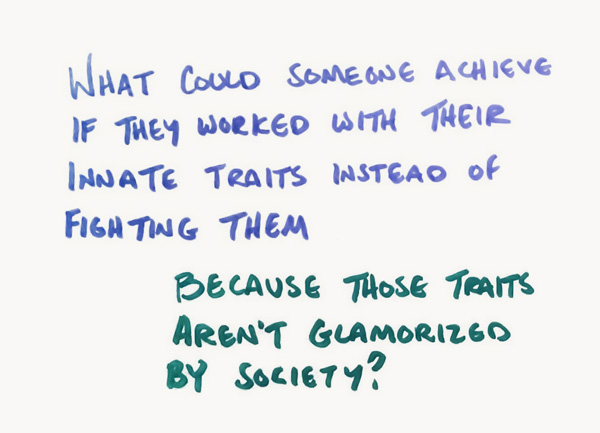 In most cases, when someone says they wish they had the time to do something, it's a way to communicate something just isn't a priority, and that's ok. But when they're frustrated that they're unable to work toward something they want because they don't have enough time, it's an admission that they're unwilling to stop doing other things in exchange for working on the thing they want.

Richard Koch, the author of the 80/20 rule, explains accomplishing more of something is all about doing less of things that don't matter. And in modern life, there are lot of distractions that we can remove. Even if all you did was cut out noise like social media and repeatedly checking the news, you're creating mental space. How much time gets stolen every day because your phone pulls your attention somewhere with a notification? It may mean only watching Netflix shows that you're truly passionate about. It may mean not getting sucked down a Youtube worm hole on a Friday night.

When we think about what we could give up to make more time, too often we fall into the trap of considering only the important things in our lives. Friends, family, hobbies. But so much of our time is filled with distraction or inefficiencies. Making better use of that time doesn't require you to spend less time with the people you care about or recreation that you enjoy.

They want what “having” it means, they aren't actually interested in doing it

This problem is uniquely visible for me living in Hollywood, surrounded by the entertainment industry. A person pursuing acting whose actual motivation is to be a celebrity is going to have a hard time with the day-to-day grind work required to get there. Taking classes upon classes to fill time. Calling off work to drive across town to to get rejected in auditions. Memorizing lines only to get cut in script rewrites. Seeing others achieve what you want with poor work. Accepting no/low pay roles. The only people that can survive this – beyond the fortunate few – are people who are genuinely passionate about the acting process.

The fitness industry is a bajillion dollar behemoth that exists for only one reason: People want radically different results without having to change what they're doing.

This type of exercise lets you eat all the junk food you're currently eating! This supplement turns calories into water! Not eating this one type of thing that you barely consume will shed inches off your waistline!

For most people, the reality is being in better shape just requires eating healthier, less calorically-dense food and giving their bodies more exercise. But that's hard because it takes time and requires a change in habits.

If you've been stuck for awhile because what you're doing is producing an undesired result…you can't keep doing it the same way and expect better results.

Not having something, and then doing the work to achieve it, requires evolution. The person you are when you achieve it will be different than the person you were when you didn't have it yet. Evolution is just change on its natural course. Change only occurs when we do something different from what we did before. (See above.) To know how to productively change what we're doing requires changing how we're thinking about something. And this only happens by continuously learning.

This doesn't mean you have to be taking physical classes. Or reading books constantly. Though both are fantastic options. It could simply be having a process to reflect on what's working and what isn't. It could be a monthly lunch meeting with someone who has achieved what you want. It could be attending a respected conference. 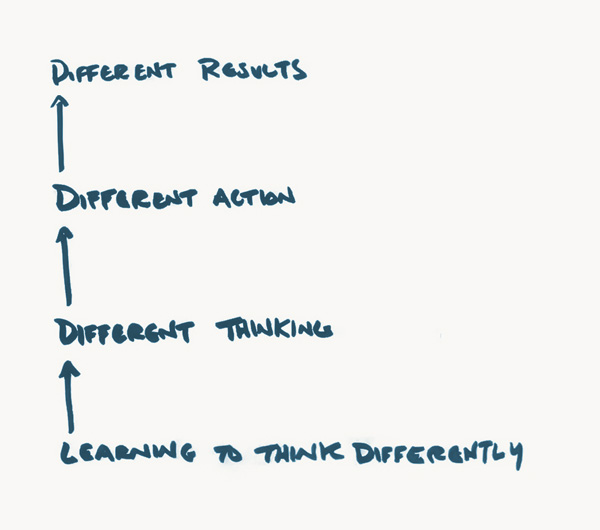 They live oppressed by self-judgement

Many people desire a type of partner or career or financial status but ultimately don't believe they are deserving or capable of achieving that thing. Ironically, feeling this way is the only thing that actually makes it true.

Your work is good. Your ideas are good. You add value to peoples lives. You have the capacity to get what you want. If you're the victim of your own self-judgement journaling and therapy are fantastic tools for retraining your mind.

They don't actually know what they want

Few types of stagnation are as disheartening as when you feel like you're not working toward something because you can't figure out what it is you want.

I've struggled with this at various points in my life. I've felt uninspired with the options I felt like I had. But that's because I was limiting the options I was giving myself to things I thought I could achieve painlessly or would be allowed to achieve by others.

I realized there are always things I want but they are subconsciously left off of the list because I don't think I deserve them or have the capacity to achieve them.

When you embrace what you really want and allow yourself to want it, you can start mapping out some goals to get there.

“Non-successes” are viewed as failure instead of reps

When weight training, what is the most important rep? The last one that results in muscle failure. This is what causes growth. With anything in life – asking people out on dates, creating stronger habits, making sales calls, trying a new idea – the failure reps are the ones that initiate the growth.

When someone reaches a personal record of a 400 pound deadlift, were the thousand reps before that a waste of time? No, they were growth reps that allowed the record to occur.

If asking out one beautiful person meant a 100% success rate, no one would be single. Every “non-yes” you get is a growth rep. Getting the waistline you desire is going to require new eating habits that you are not going to hit 100% of the time. It is the ability to start a new set after you slip up that will change your lifestyle.

Where would you be in 5 years if the fear of getting the reps in didn't stop you from lifting the bar?

They want something, that even when doing everything optimally, still requires time to achieve

Perhaps the hardest trap to come to grips with. Most things move slower than we'd like and  just require you to keep working on a timeline until a desired result is possible. There are ways to speed it up as discussed above, and secret shortcuts and lucky breaks materialize occasionally, but ultimately getting from where you are to where you want to be requires your gears to be turning long enough to push you through that journey. Ideally, that process involves turning gears that you enjoy.

This piece was originally a thought exercise that came up as a part of my morning journaling process. Journaling has been a powerful tool for me over the last several years. If you'd like to experiment with it yourself read Primer's Guide, How to Get Into Journaling: The One Thing That Can Change Everything. 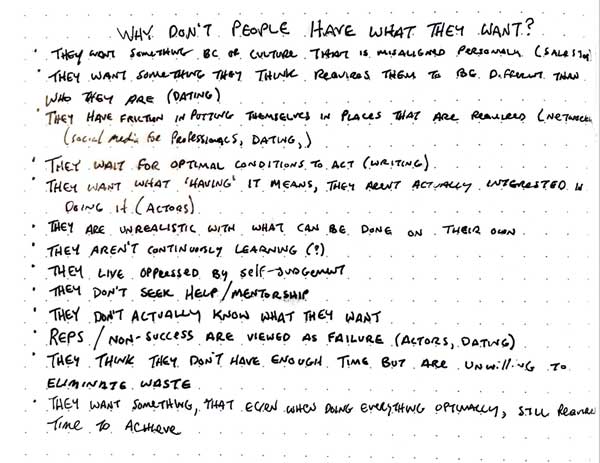 Self-Development
With 15 outfit examples to get you started.
Lighten up your winter wardrobe.
Getting the perfect fit right off the rack is like winning the lottery. Whether you wear suits or selvedge denim, this guide demystifies the process of tailoring and alterations.
Did You Miss These?
Cohabitation is a a big step, but if you go in with the right mindset, the transition can be seamless.
Most men see patterns and run for the hills. Patterns don't have to be scary and when used properly they will only enhance a lackluster wardrobe. Learn how to identify and wear the following ... [more]
Many guys don't think they can be an "alpha male" because they're not arrogant jerks. There is another way.
Discipline is a skill anyone can learn.
Cutting through the confusion: A breakdown of common knife terminology.
You don't have to be a traumatized father fighting a fungi-based zombie apocalypse to wear this jacket.
We've researched the best men's winter coats, based on material composition, product rating, and price.
Life can be overwhelming - Here's a proven method used by fighter pilots to make smart decisions fast and stay on top of it all.
And how to build them in under 30 days.