sidebar_content
Skip to Main Navigation Skip to Content
An introduction to dressing like a social chameleon.
21 February,2022By Andrew Snavely / Photos By Matthew Smith
This post may contain affiliate links, read about our editorial promise

The hardest part of dressing well isn’t figuring out fit. Or how colors match. Or how much to spend on a specific item. These are things that can be picked up by doing a little bit of research (or sent right to you if you’re a Primer subscriber).

Those questions are the technical side of style, more of the science.

The hardest part is deciphering how casual or dressed up to be for any given event. Some things are predefined by culture – a traditional wedding calls for a suit and tie. A funeral, a dark suit and muted colors.

Some things, like a job interview, used to be easy but now require a greater understanding of the social nuances of an industry. While finance or other classic professions still call for a suit and tie, wearing that to a Silicon Valley startup or to a creative Los Angeles advertising agency (as I mistakenly did 10 years ago), shows the dressed-down interviewer you’re green and lack boots-on-the-ground work experience.

This is where the art of dressing well comes in. Being impeccably dressed doesn’t just mean your tie bar is straight and you have the perfect pocket square fold – it’s knowing whether wearing a tie bar and pocket square at all is the proper level of dressiness for where you’re going.

And that is something that’s very tough to pick up, specifically for places and groups of people that are new to us.

Your partner invites you to accompany them to hang out with some higher ups to celebrate a win after work. The first inclination would be to wear more professionally-minded clothing – but this is outside of the office, and the goal isn’t to get your partner a job, it’s to help prove their social fluency within the group to encourage greater work engagement and opportunity. So what does that mean? That means you don’t want to appear too stuffy. You want to look and feel cool, but dressing too casually could exaggerate the higher ups’ perception of youth and inexperience.

You’re attending a work conference – except it’s in San Diego. You’ve never been there but you know it’s a much more casual city than the one you live in. Do you still wear a tie? A jacket even?

You’re going on a first date to a bar that you’ve never been to. You need something that’s sharp and intentional but A) doesn't make you look like an old man who overdresses because that’s what he has to wear to work; and B) doesn’t make you look like a guy who never outgrew college and still wears t-shirts to everything. But on top of both of those things, this bar appears to be a fancier cocktail type place – which would lead to dressing up – but it’s new and trendy and this person seems hip so…maybe casual?

Have you ever showed up somewhere and you’re way overdressed? It makes us feel old and socially inept, and like we’re standing out.

Have you ever showed up somewhere and you’re way underdressed? It makes us feel immature and socially inept, and like we’re standing out.

Which means you’ll feel unconfident and embarrassed. A powerful example of the real message behind the sentiment “clothing makes the man.” People misread that and think it’s a shallow and consumerist message. It’s actually a reference to the confidence and courage feeling well-dressed in a certain setting builds in us.

“Ok, great Andrew, but I still have to get to this thing in an hour and I don’t know what to wear.” Almost all of the men’s fashion styles and items we talk about on Primer are from the foundation of versatility. I like to refer to really versatile items like a pair of boots that can be dressed up or down as chameleon items. On a day to day basis, that’s smart spending, as you’re getting more wear for your money than you would from a pair of dressy-only boots.

But what happens when you create an entire outfit of chameleon items? Full on social cloaking. Blending in like a chameleon isn’t referring to wearing a uniform that looks just like everyone else – it’s about choosing items that look like the appropriate level of dressiness whether the venue ends up being casual or dressed up. Put an actual chameleon on sand and he fits in with sand. Put him in a jungle and he fits in with the leaves.

That’s the goal of this outfit. When you’ve got 30 minutes to get ready and you’re staring at your closet completely dumbfounded with how dressed up to be: Start with this outfit. Look great and fit in regardless of how dressed up the setting actually ends up being and ensure you have the confidence to put forward what really matters: Your awesome personality and expertise. 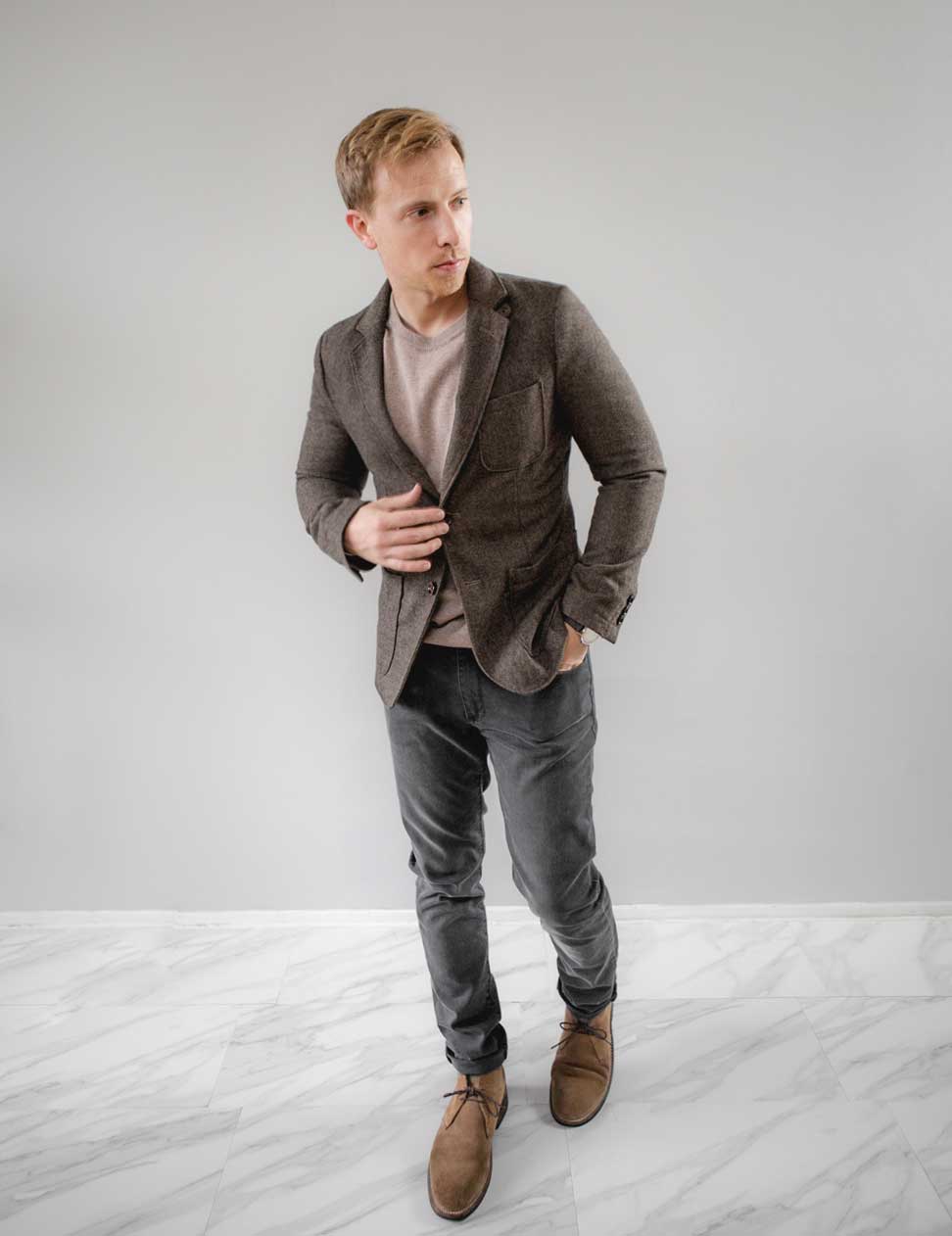 Every item in this outfit is one that could be dressed up or down, and its chameleon-like properties come from its interaction with the other items. 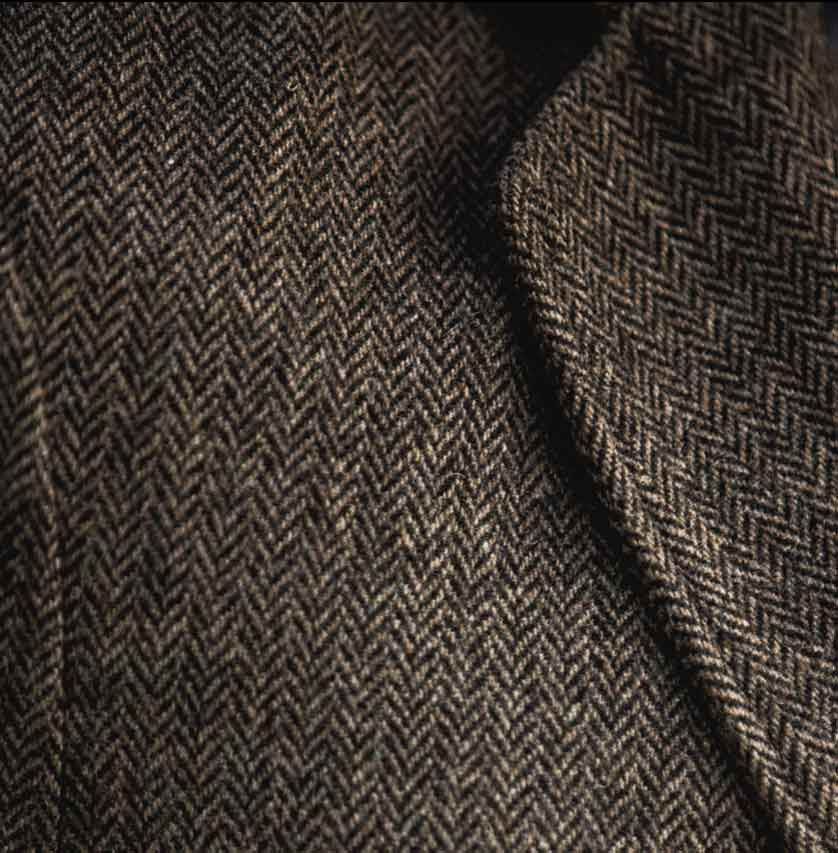 This herringbone blazer from Target can easily be dressed up with slacks, a tie, and dress shoes. But because of its thick weight and texture, it’s also able to be dressed down. And if you show up somewhere and everyone is dressed more casually and you don’t want to be the one guy in a jacket, taking it off completely alters the dressiness of the outfit. Because we’re not wearing a collared shirt under the sweater, simply removing the blazer makes the outfit just a sweater, jeans, and boots. A perfectly acceptable casual outfit for any situation.

A thin cashmere sweater like this from Amazon’s house line could be worn dressed up with a suit and tie, or just with some jeans and sneakers.

Dark gray slim jeans, my personal favorite for versatility, can be dressed up due to their fit and color, but easily look modern and cool with a henley and a bomber jacket. 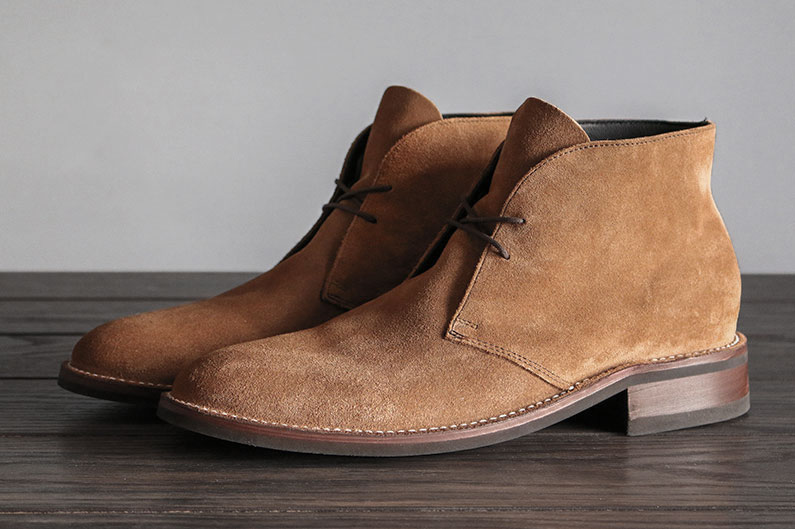 And perhaps the most versatile item in this Getup are the chukka boots. Lots of boot styles can be dressed up or down, but I find the chukka to be the most universal. I’ve had this pair from Thursday Boots for a couple years now, and are often my go-to when I’m just not quite sure how dressed up I should be. Their shape and thin sole allows them to appear more dressy, but the minimalist clean design also works perfectly with modern casual outfits like the henley and bomber. What do you wear when you're not sure how dressed up to be? Chat with me in the comments!

Casual StyleFall StyleLive Action GetupProfessional StyleSmart CasualStyleThe GetupWinter Style
Lighten up your winter wardrobe.
Getting the perfect fit right off the rack is like winning the lottery. Whether you wear suits or selvedge denim, this guide demystifies the process of tailoring and alterations.
Discipline is a skill anyone can learn.
Did You Miss These?
Answering your questions, man to man.
As a Primer reader you already know the importance of controlling the image that you convey to the world. How you dress, how you...
Re-take control: Anxiety can be all consuming but there are real ways to overcome it. And you can start today.
Cutting through the confusion: A breakdown of common knife terminology.
You don't have to be a traumatized father fighting a fungi-based zombie apocalypse to wear this jacket.
We've researched the best men's winter coats, based on material composition, product rating, and price.
Life can be overwhelming - Here's a proven method used by fighter pilots to make smart decisions fast and stay on top of it all.
And how to build them in under 30 days.
Do these now to keep your style strong and simple.