Our picks for the best men's boots that have maximum versatility, with affordable and splurge options.
5 February,2021By Stillman Brown
This post may contain affiliate links, read about our editorial promise The President in Grizzly Wheat from Thursday Boots. Special thanks to Thursday Boots for teaming up with us to make this post possible!

In a world of near-infinite choices when it comes to footwear, a modest proposal: the boot should be your go-to. Your workhorse. Your daily driver. Your standby.

Boots are one of those rare items that thrive in nearly every role you throw at them. They look great, are highly functional, and bestow the kind of confidence you get from that marriage of form and function.

Style-wise, they’re highly versatile. Dress ‘em up or down; pair brown boots with black pants and vice versa; wear ‘em with jeans or a suit – they compliment to your look by adding a rugged edge.

Functionally, they keep your feet protected, dry, and stable in a range of conditions, and that functionality feeds the enjoyment you get from wearing something that’s timeless and polished.

They’re an investment in your look, and while they might set you back more than a pair of sneaks, choose carefully and practice proper boot care and you have an item you’ll use for years.

When you’re looking for your first pair of quality boots or just rounding out your closet it’s worth taking a moment to consider how, and where, you’ll be using them.

After all, you want to make sure you’ll be able to wear them as often as you want for your favorite looks and social settings.

Nearly 10 years of observing style trends and building outfits for every conceivable occasion has led the staff here at Primer to distill men’s boots into these six categories, with notes about style and picks at two price points – affordable and splurge.

Must-Have Features in a Quality Boot

There are certain best practices in bootmaking that separate the consumer stuff from a pair of lifer boots.

First: quality leather. The Horween brand is the standard-bearer. Since 1905 they’ve produced a variety of leathers, each highly regarded for the attention to quality and consistency. Horween is a name premium brands use to demonstrate the quality of their materials. It’s not the only game in town, but you won’t go wrong with it. These days, most leather is chrome tanned, yielding a soft, stain resistant leather. Vegetable tanning is considered more artisanal (and consequently more rare). Both methods will give you a quality, rugged boot.

Then there’s Goodyear welt construction, a method for attaching the sole of the boot to the leather upper that ensures they’re waterproof and resoleable. Don’t buy without it. The alternative to a hand-stitched welt is using glue to attach the sole to the upper. While this lowers the cost, it also means your boots will likely fall apart in a season or two.

You should also look out for functional comfort features, including full glove leather interior lining, which lends a soft feel right out of the box. Comfort strips and cork-bed midsoles line between the foot bed and the sole, and help with shock absorption. It’s worth considering: if a pair of boots don’t feel nice on your feet you won’t want to wear them into the ground, and that’s the goal. 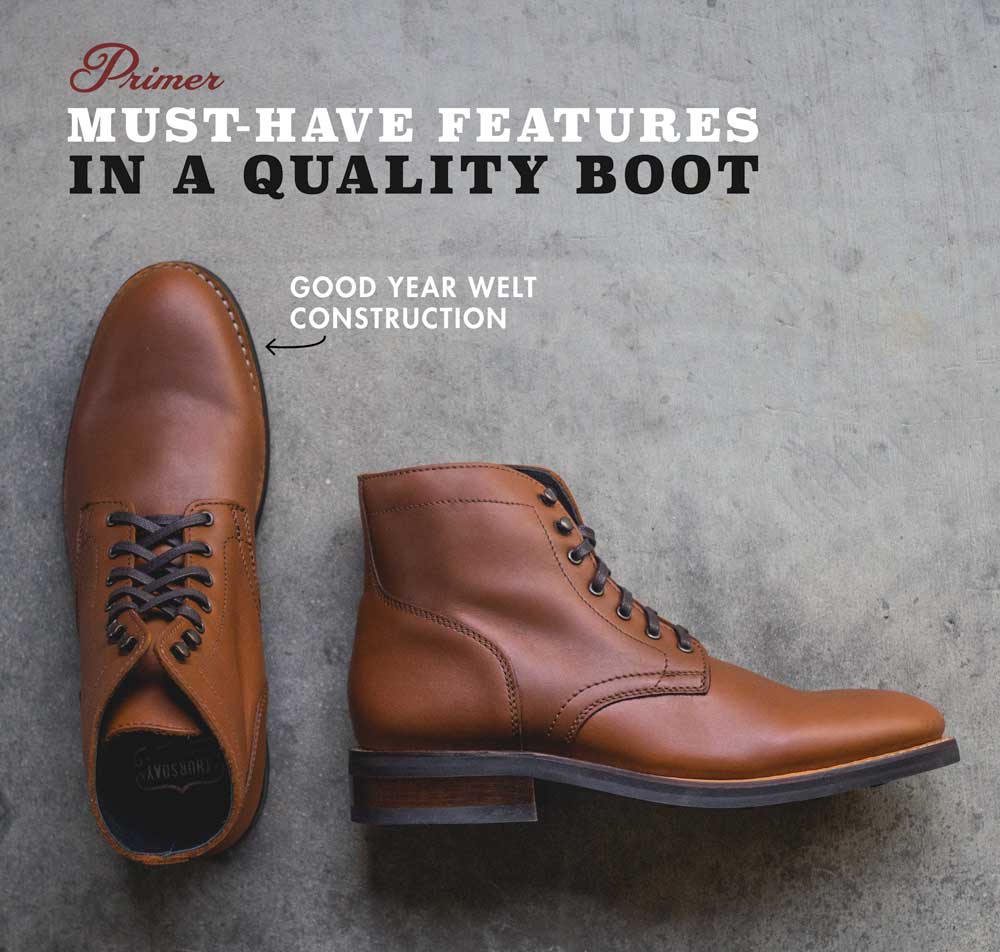 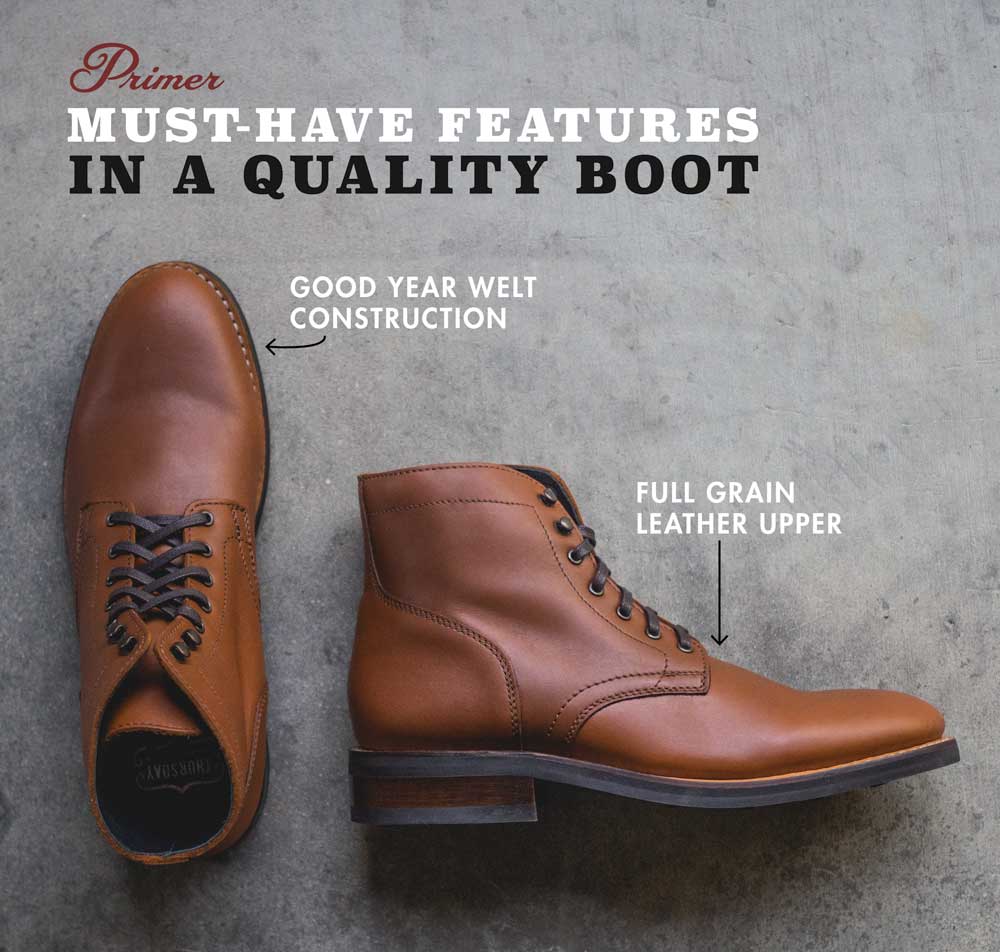 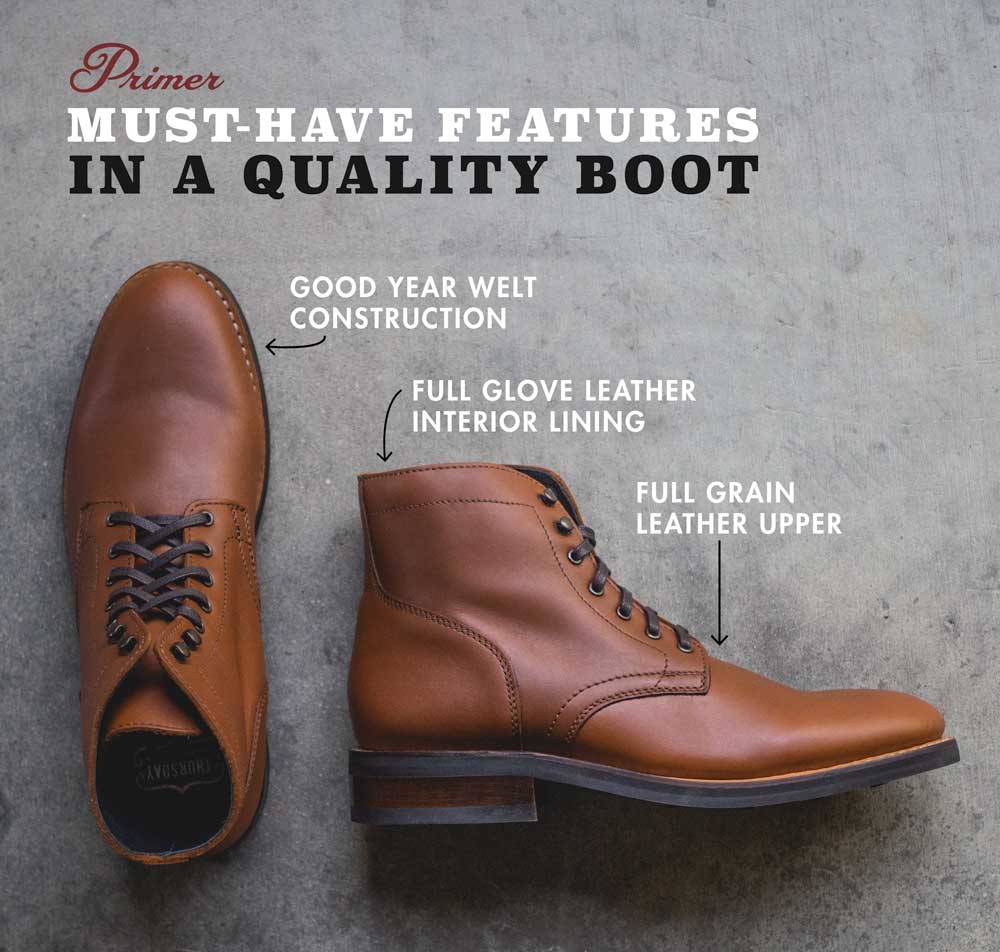 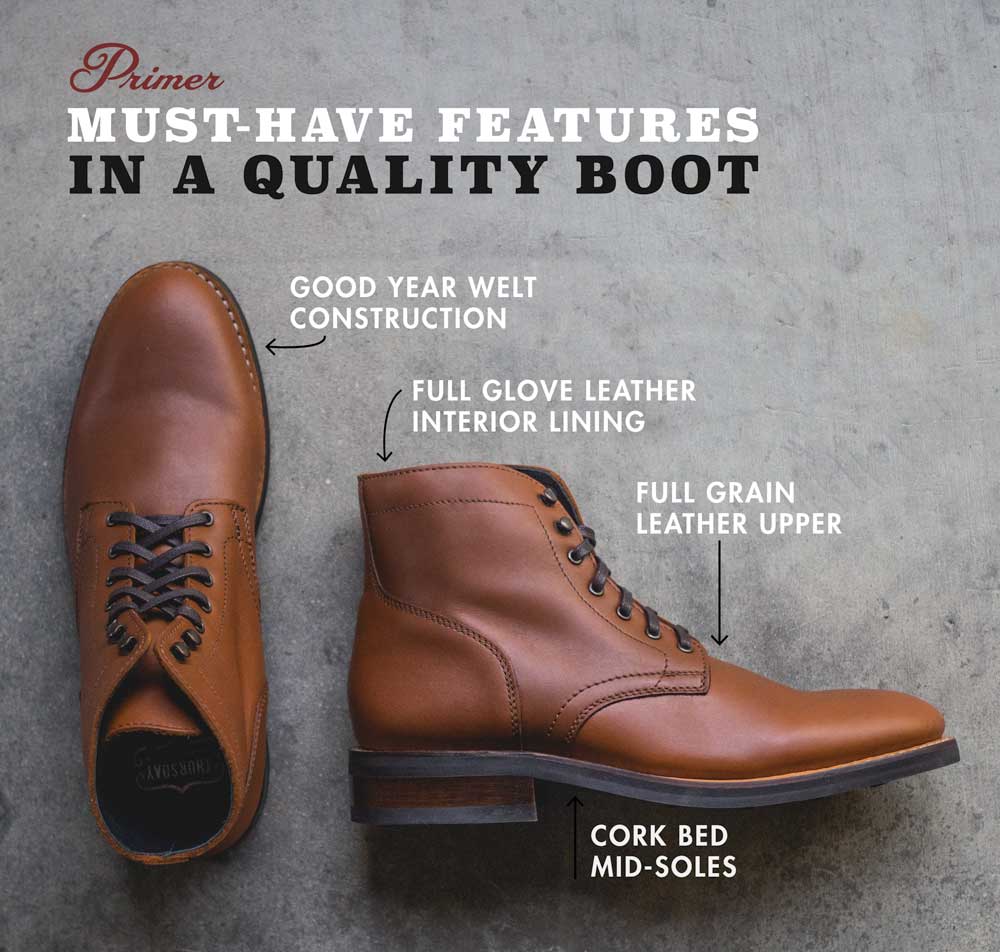 And of course, what style fits your needs? Here’s six of the best classic mens boot styles. This type of boot is the lower-cut version of the calf-length combat boots of WWI also known as a Trench Boot or Pershing Boot, and have been made hugely popular since the Wolverine 1000 Mile re-release in 2009. It’s great for the guy who leans smart casual in his wardrobe choices. The low profile, toe box, and thin sole give the boots a more dressy appearance, but with a rugged, vintage, minimalist feel.

The service style boot is perhaps what most think of when they think “boot,” and it’s ideal for the guy who wants his boots to be his dressier casual/smart casual go-to.

One thing to be aware of: The Wolverine 1000 Boot boasts a flat leather sole, like a dress shoe, while Thursday boots are fitted with a studded rubber sole that lends more traction – something to consider if you’ll be wearing your boots in inclimate weather. Wingtips carry a connotation of formality nowadays, which is funny considering that wingtips with broguing (the holes and perforations) have historically been considered casual and sporting attire.

They were traditionally worn for hunting and those who know their Sherlock Holmes remember brogues were a mark of working class characters.

But that was then, and this is now – from Wall Street to Portland, snappy office warriors rock wingtips for an extra bit of polish to their look.

Wingtips without an overly chunky sole pair great with a suit or with smart office casual, depending on the formality of your workplace. Some like the two linked here are essentially beefed up dress shoes with an ankle covering, making them more than acceptable to be dressed up in the winter months. Perhaps the most distinctive look in our roundup, the moc toe with a white wedge sole have a long association with men who work with their hands on construction sites and in workshops. This lends them a heritage feel that calls back to the steel mills of the 1970s.

Named for the moccasin-style toe, these boots are best for rugged, casual applications.

Of note with the Thursday Diplomats is the suede-specific waterproof compound WeatherSafe, which means you never have to worry about a Seinfeld situation when it comes to the elements. Chukkas: the surprising chameleon. They can be worn casually like a suede chelsea-style boot, or dressed up with trousers and even some suits.

The origin of the term Chukka is a bit of a mystery, with some contending it comes from polo (where “chukka” is a period of play). The origin of the boot isn’t in dispute: British soldiers wore a version of Chukkas in the Western Desert Campaign of WWII.

That rugged, sandy legacy is evoked in these simple, elegant boots. Highly popular in urban streetwear, the Chelsea has been a mainstay of minimalist fashion-forward attire for a generation now.

Perhaps the best-known ambassadors of Chelsea boots are the Fab Four, who made them a trend in the early 60s with their early period mod look. Casual, chunky, and rugged, this style has evolved with time from the vintage alpine mountain boots of the teens and twenties. While we wouldn’t recommend trying any technical ascents in them today, they lend a hint of the outdoors and something classic to your look.

Which boot style is your go-to? Chat with me in the comments!

Be the talk of the town (or at least the watercooler) with one of these perfect gift swap ideas.
Bundling up doesn't end at your wrists.
Bring your body and mind back into a relaxed state.
Did You Miss These?
Wool ties have become very popular, and for good reason. But try to tie one on with a semi-spread collar and you'll find our standard knots don't get the job done. Enter: The Nicky tie knot.
Trends come and go -- time to clean out these 11 items from your closet.
Make a clean and simple leather watch strap: A super easy intro to leatherwork.
There’s no time like the present to check some names off your gift list.
Your kids need you; your phone doesn’t.
The last hurrah of the Black Friday sales weekend.
Black Friday is here. And we've put in some serious time distilling what's worth shopping and what's worth skipping.
Save on gifts and stock up on essentials.
Cigars are best enjoyed socially - here’s our crash course on how to build the best experience.