sidebar_content
Skip to Main Navigation Skip to Content
Our week-long series of film inspired looks that you can can actually wear.
5 April,2017By Chris Scott / Photos By Chris Scott
This post may contain affiliate links, read about our editorial promise

No other medium in pop culture has had the same effect on how men dress as film. Does your boss wear a Rolex Submariner with his suit? You can thank James Bond for that one. That’s just one of the many, many ways that the movies, and great costume designers, have affected the sartorial world.

We’ll be looking at the costumes and characters from five different movies: James Bond in “Skyfall,” Newt Scamander in “Fantastic Beasts and Where To Find Them,” Steve Zissou in “The Life Aquatic with Steve Zissou,” Merlin from “Kingsman: The Secret Service,” and the fisherman family from “The Man of Aran.” We will be taking a quick look at what those costumes are meant to convey about the character and the world that character inhabits. I’ll also be showing how you can draw from those various influences using affordable, common pieces most guys have in their own wardrobe. Now, this is not cosplay. I’m not looking to recreate any exact looks, I am instead just turning to these movies for inspiration. I’m still trying to wear something that would not look out of place in 2017. So I grabbed my buddy Daniel to model for me and we dove into our closets to see what we could come up with. 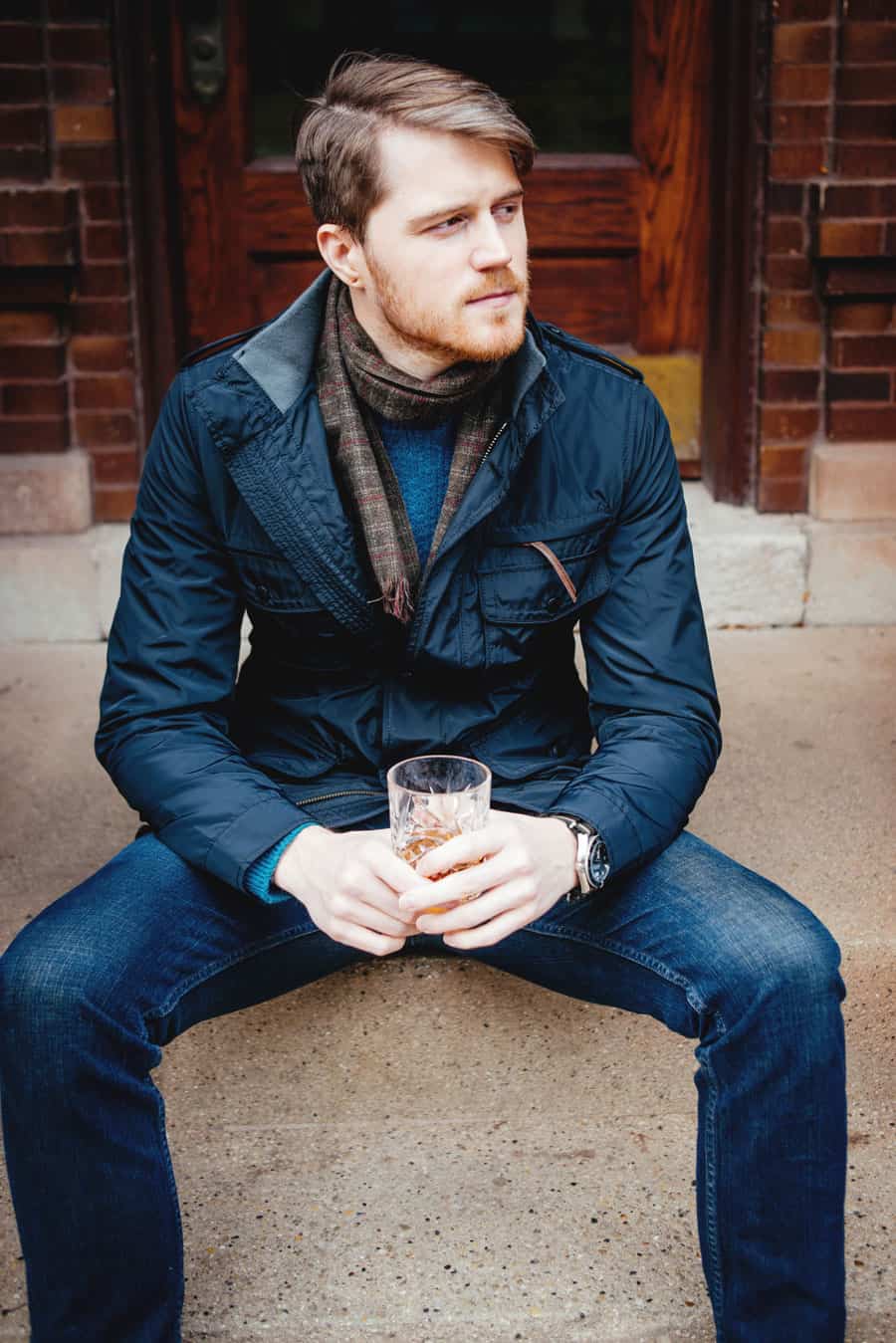 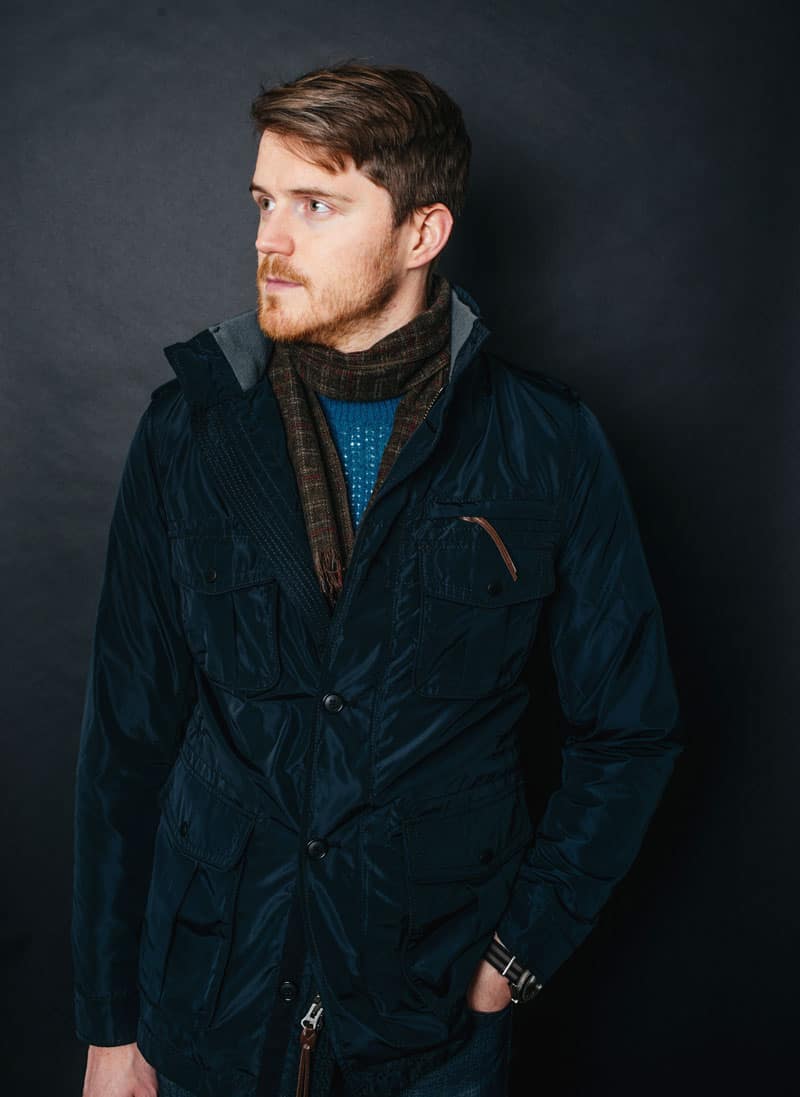 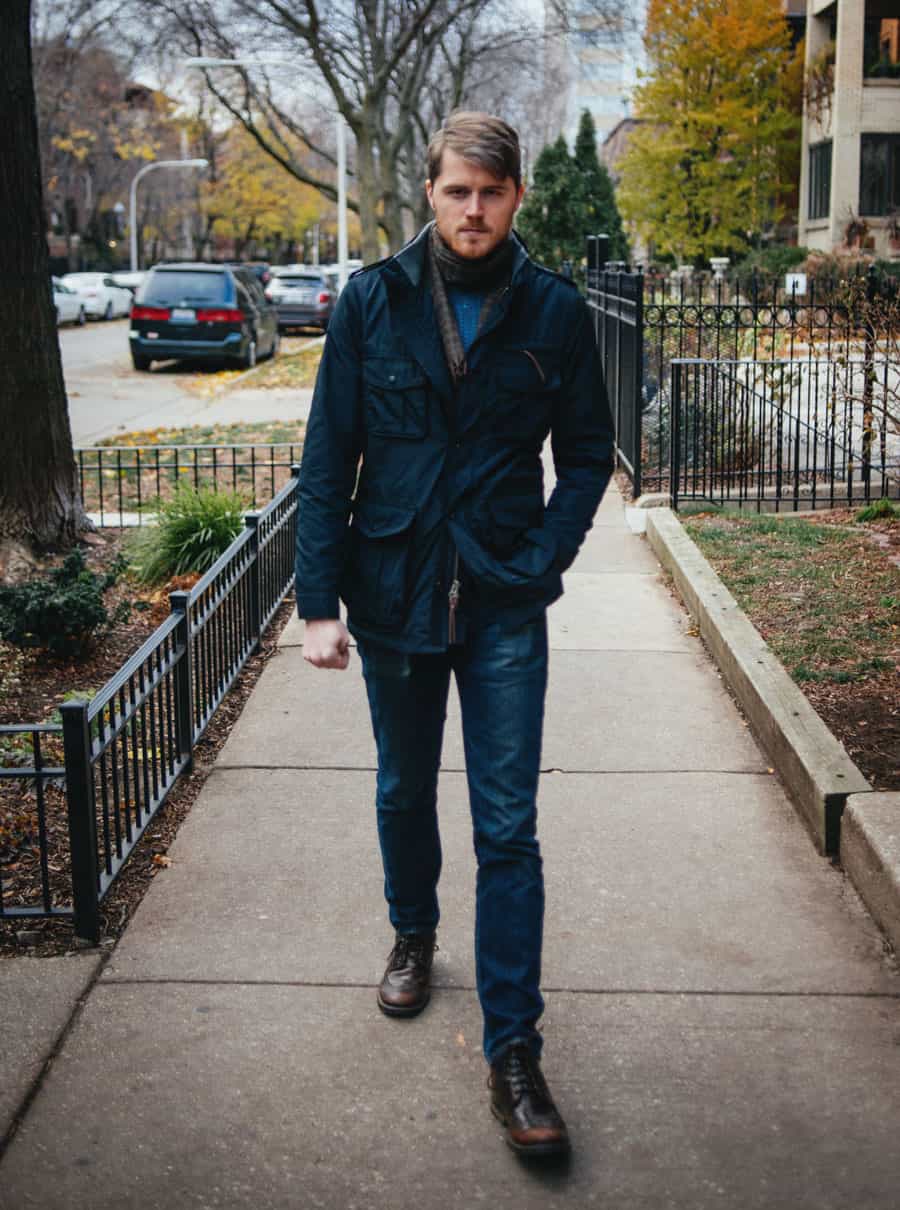 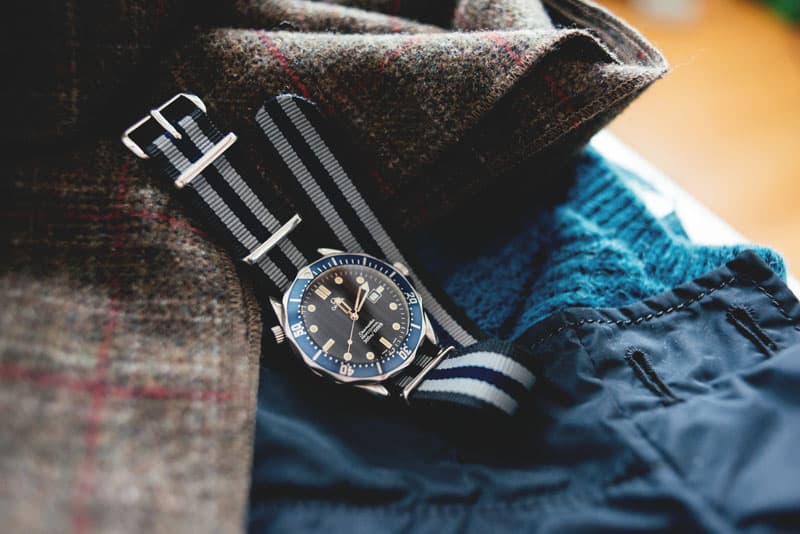 James Bond has, for better or worse, more effect on men in pop culture than any other character. If you’ve ever ordered a gin martini and had it shaken by the bartender (ugh don’t do that) that’s because of James Bond. Are you wearing a dive watch with your business attire? You can thank James Bond for that one, too. He’s got one hell of a legacy. By the time Daniel Craig was cast as Bond in 2006’s “Casino Royale,” 007 was becoming a bit long in the tooth. Blatant product placement and absurd action sequences had made the series nearly unwatchable. With this in mind, “Casino Royale” attempted to revive the franchise by reintroducing us to a Bond that was a hard-edged killer in a tightly-paced action movie without any invisible cars or exploding watches to speak of. With “Skyfall” in 2012, the character of James Bond himself was returned to his own Scottish roots with a visit to his family’s estate in the Scottish Highlands to lay a trap for Javier Bardem’s renegade MI-6 agent turned terrorist Silva. The Scottish Highlands sequence in Skyfall is one of the most beautifully shot productions of the past 10 years and costume designer Jany Temime brought her A game to this sequence.

Once in Scotland, Daniel Craig’s Bond quickly loses his closely-tailored Tom Ford suit and is instead decked out in a costume that epitomizes British country life without looking like a parody. A lesser costume designer, when reading the script and seeing Bond’s return to Scotland, may have been tempted to put him in tweed and tartan like George Lazenby’s horrid kilt ensemble in “On Her Majesty’s Secret Service.” Instead, Temime put Bond in a close-cut field jacket, brogue wingtip boots, and a blue sweater to add a pop of color. The waxed-cotton field jacket has been a staple of British country life for over a century. Much like Bond himself, its history can be traced back to both Scotland and England. Revolutionized by John Barbour in Galloway, Scotland in the 1890s, the waxed cotton jacket became a staple of country life in the British Isles. By the 1960s, the material was used in motorcycle jackets, and the rest is menswear history. Bond’s brogue Crockett and Jones wingtip boots also have their origins in Scottish country life. The brogue was developed to allow water to drain and pass through shoes and boots when walking in the damp Scottish Highlands. Over the years, it’s been adapted and adopted as a standard part of men's suiting, but its roots are firmly in the Scottish countryside. Lastly, Bond is wearing a pair of skinny corduroy jeans, which I think is probably the most subtle touch. Like the Barbour jacket and brogue boots, corduroy is an old fabric that has its roots in the British countryside. Head-to-toe, Bond is wearing an outfit that screams “I’m in the country!” without looking at all like a costume.

Of all of the movie costumes we are going to look at, this one is probably the easiest to adapt to everyday wear. The white shirt and blue sweater add a pop of color to an otherwise totally earth tone look and help bring the whole thing together to be easily wearable on the street.

To put together a look similar to this, I used a Lands' End military jacket as a stand in for the Barbour and a pair of Clarks Montacute Lord boots instead of the Crockett and Jones.

In the film, Bond is wearing an Omega Seamaster Aqua Terra, but we went with an older and far more affordable Bond watch: the Omega Seamaster Professional 300 Ref. 2541.80, which Bond famously wore in Goldeneye. This quartz Omega can be found for less than $1000, which makes it the least expensive Bond Omega on the market. Throw it on a Bond NATO strap like Craig’s Bond in “Spectre” and you’ve got a subtle nod to 20 years of Bond film history. If the Omega is still too rich for your blood, there is an Alpha homage that can be found for a fraction of the cost of an Omega.

Come back tomorrow for our next Menswear the Movies!

Casual StyleFall StyleLive Action GetupMenswear at the MoviesStyleThe GetupWinter Style
Getting the perfect fit right off the rack is like winning the lottery. Whether you wear suits or selvedge denim, this guide demystifies the process of tailoring and alterations.
Discipline is a skill anyone can learn.
Cutting through the confusion: A breakdown of common knife terminology.
Did You Miss These?
Covering almost a half of your body, the fit of your shirt is paramount for looking your best. We break it down from neck to waist.
Whether you're dressing up or going for comfort, the sweater is one of the most versatile pieces in a man's wardrobe.
Carolina or St. Louis? Brisket or Pork shoulder? This summer, navigate the maze of sauce styles, meat cuts, and cooking methods of barbecue.
You don't have to be a traumatized father fighting a fungi-based zombie apocalypse to wear this jacket.
We've researched the best men's winter coats, based on material composition, product rating, and price.
Life can be overwhelming - Here's a proven method used by fighter pilots to make smart decisions fast and stay on top of it all.
And how to build them in under 30 days.
Do these now to keep your style strong and simple.
If you want to know how some rich actor gets in amazing shape, you're in the wrong place.