Like so many other timeless pieces in the menswear canon, khakis are deeply rooted in military origins, with strong ties to the US Army in World War II, then crossing over to the civilian world as a preppy staple of the 1950s. But khakis had already been around long before the ‘50s. The story of khakis begins a century earlier in 1845, in India.

There are two versions of this story. Some point to the British soldiers who discolored their white uniforms with local dust, mud, coffee – sometimes even curry – in an attempt to better blend into their surroundings. In fact, “khaki” is the Urdu word for dust-colored, which is derived from the Persian “khak”, meaning dust. Some historians specifically credit British commander Sir Harry Lumsden, who coped with the relentless heat in Punjab by replacing his standard-issue military trousers with pajama pants which he dyed with tea leaves (probably so that it wouldn't so obvious that he was wearing pajamas to war), only to realize later that he had also effectively camouflaged them. Either way, by 1848, the British armed forces officially embraced the advantage of khaki uniforms not only in India, but for other campaigns through the late 1800's in South Africa, Sudan, and Afghanistan.

How Do Chinos Fit In?

At first, the British made their khakis in China – but this was before everything was made in China. At the time, it was to save on transport costs. But by the 1850s, demand rose to a level that the British Empire decided to make their own khakis. That's when a weaver named John Haller brought the first hand looms to British-occupied India. Haller is usually credited with creating the khaki dye used to color the uniforms for the British military.

Americans followed suit with similarly colored uniforms for the Spanish-American War in 1898. “Chino”, which comes from the Spanish word for Chinese, has come to be a more generic description for cotton or twill casual pants. So although “khakis” and “chinos” have become somewhat interchangeable terms, if you must get technical, khakis are chinos in the specific sandy dust color of their original namesake.

Back In Action, Stateside

In 1912, the US Navy adopted khakis for naval aviators, and they were also worn by submarine crews in 1931, rounding out the uniformed service of khakis in land, sea, and air. Khakis rose further in the American military ranks in 1941 during World War II, when they became an official part of the senior officer's uniform while on-station. At the time, this US version of khakis was made from a tough, service-grade twill cloth dubbed “Cramerton”, created by weavers Galey & Lord. Later that year, officers were also permitted to wear khakis while “at-ease”, whenever breaks of ‘liberty' were granted. The khakis of the American GI were often referred to as “suntans”, as they were a lighter shade than those worn by the British (hence the distinction between regular “khaki” and the slightly darker “British khaki”). The Commercialization Of Khakis

In as early as 1906, Levi's launched its inaugural khakis under their “Sunset” label, one of the first sub-brands to offer non-denim alternatives. And after wartime, there were massive surpluses of khaki available, which encouraged their proliferation in civilian life. Khakis were durable, comfortable, and their simple style and neutral color made it so easy for them to cross over. In the years following the Second World War, US veterans continued to wear their khakis in everyday life, and it wasn't long before they caught on in a big way and became standard to the preppy wardrobe. Khakis showed up on college campuses – so they could even be scholarly, while at the same time, they had always been symbolic of adventure, favored by pioneers like legendary aviator Charles Lindbergh and icons of ruggedness like Ernest Hemingway. What else would our all-time favorite adventurer-slash-rugged scholar wear? The pants worn by Indiana Jones were based on original World War II Army and Army Air Corps officer trousers.

The Rebirth Of Khakis

For many of us who grew up in the '80s and '90s, our introduction to khakis was decidedly less exciting. The official (and unofficial) pants of brave servicemen, action-hero icons, and debonair statesmen had become the billowing, pleated monstrosities sported by our dads in the name of “business casual”. How did this happen? The de facto clothiers of corporate America – like Brooks Brothers, Gap, and Dockers – had begun offering fuller, double-pleated khakis as an alternative to the conformity of the weekday suit. Doug Conklyn, the head of global design for Dockers, admitted that what was once the pant of pioneers and adventurers, by the mid-1990s “became capitulation”. In the mid-2000's, designers and fashion directors like Michael Bastian of Bergdorf Goodman (who once said that khakis “had become a punchline”) took it upon themselves to bring sexy back to khakis and chinos. It was then that we began to see the sleeker, skinnier khakis that are still in favor today. They were cut slimmer (but not too slim), the rise was lower (but not too low), and the pleats got phased out. New-age retailers like Bonobos did more to “tailor” khakis closer to the body by introducing features like the curved waistband. Furthering the fit of khakis have become something of an obsessive race among the top menswear brands of today.

In an ironic attempt to break the stereotype of suits, Dockers had perhaps become the guiltiest contributor to the not-so-favorable '90s stereotype of khakis. They recognized that their khakis needed to break the mold (yet again), and so, under Conklyn's direction, Dockers introduced its Alpha khaki in 2011 – a rugged, yet slim, low-rise chino, which was a game-changer for the company, becoming the choice chino of tastemakers and make-or-break trade shows like Pitti Uomo and Magic. Dockers helped make khakis cool again with the introduction of the Alpha Khaki, a modern slim and tapered update, in 2011.

How To Wear Khakis

Khakis are one of the most versatile pants you'll ever own. Dress them down with a denim jacket, or dress them up with a blazer and tie.

Khakis can exist anywhere on the continuum of smart and casual. Consider this modern minimalist look in a simple t-shirt and cardigan.

Khakis aren't just preppy. Embrace their adventurous roots and make them rugged with the right pair of boots, a henley, or an un-tucked shirt. 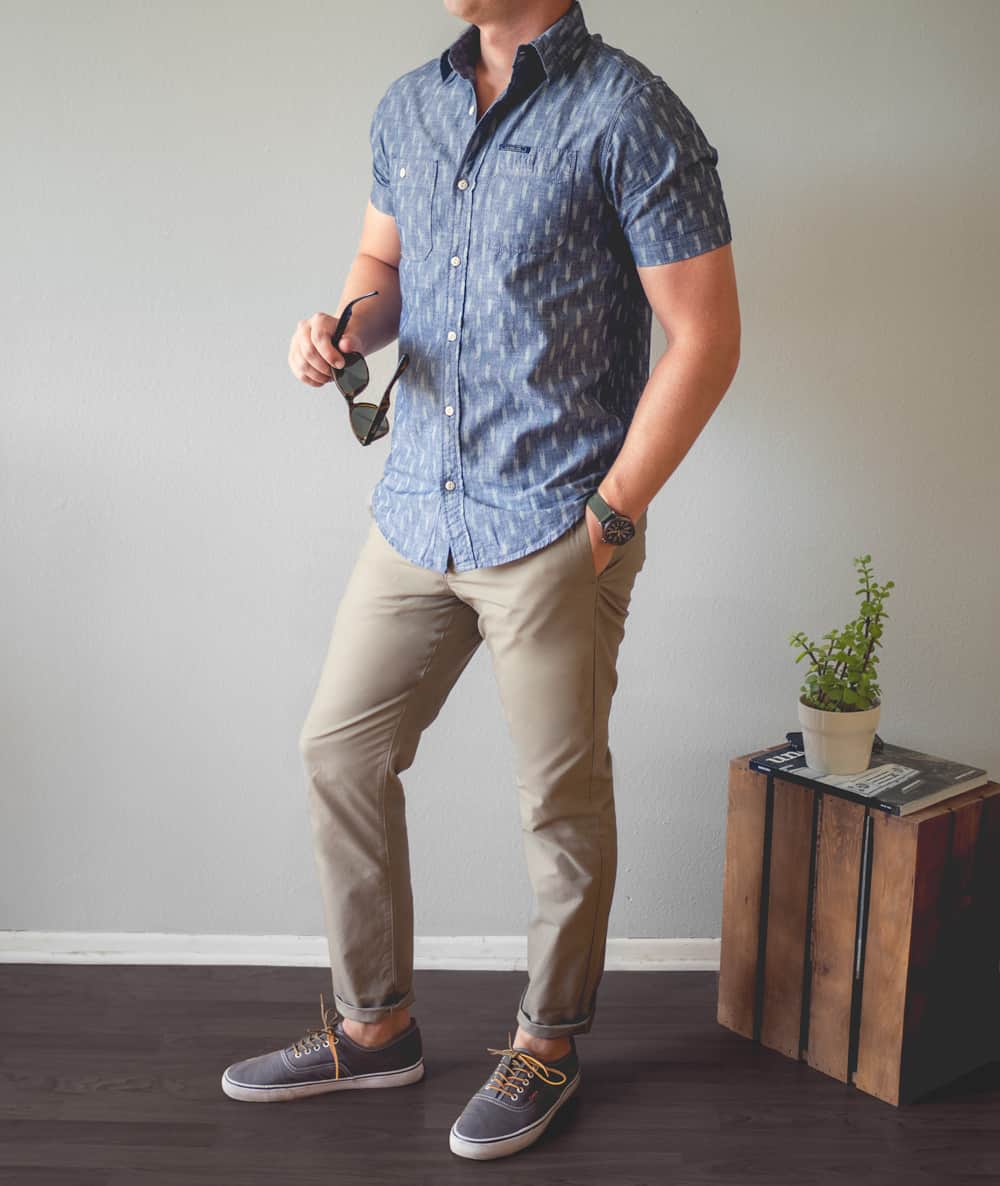 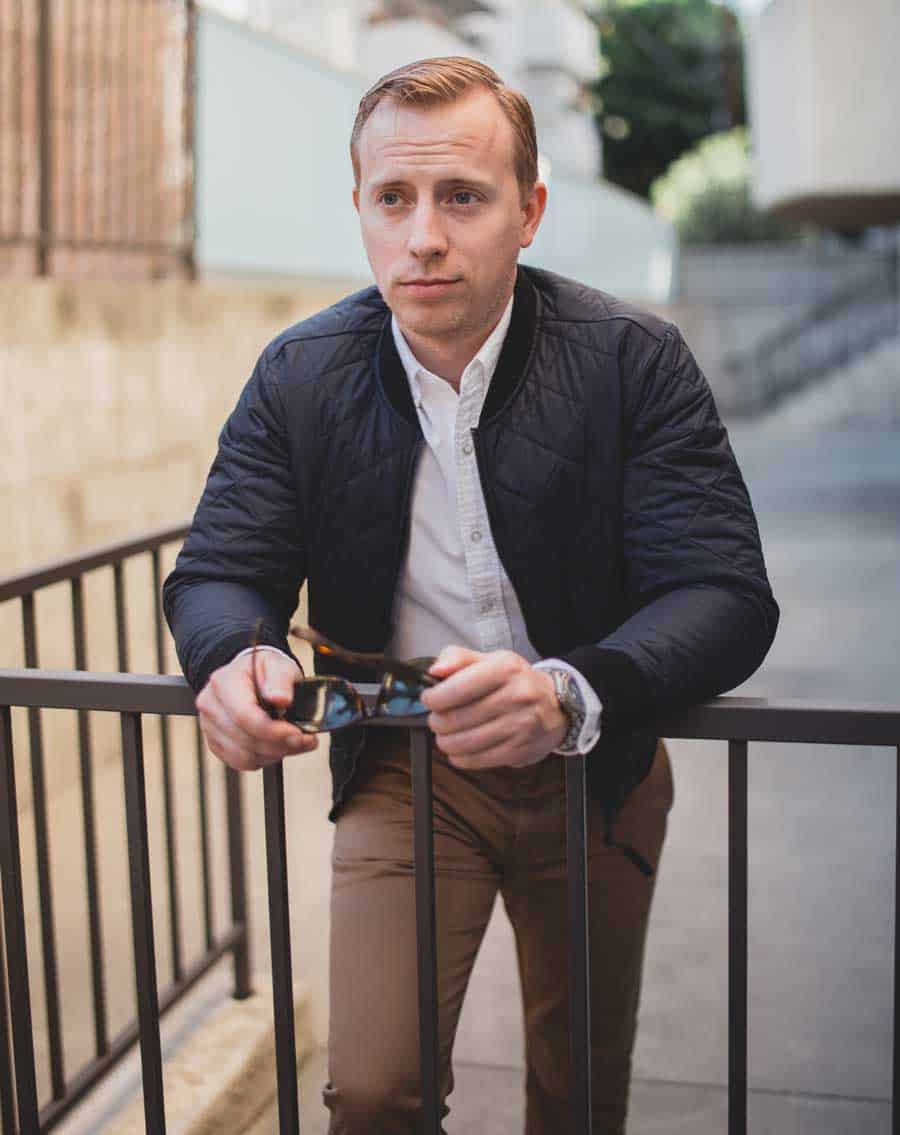 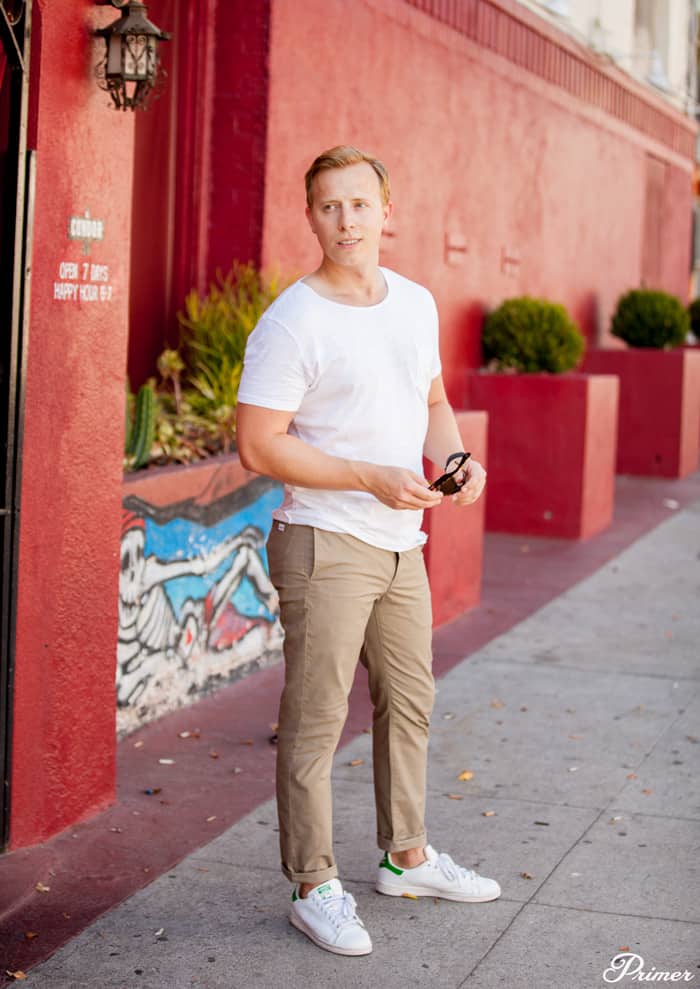 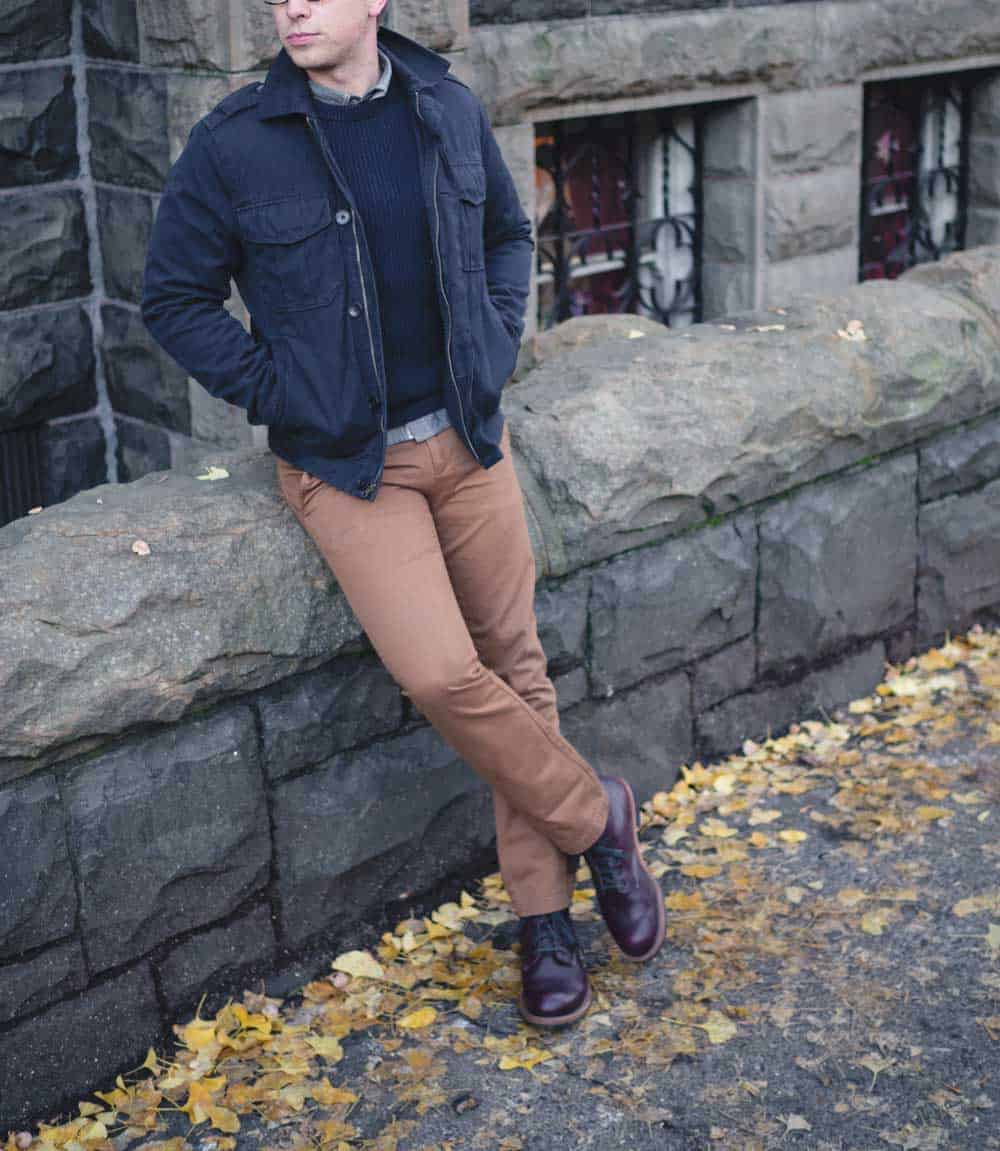 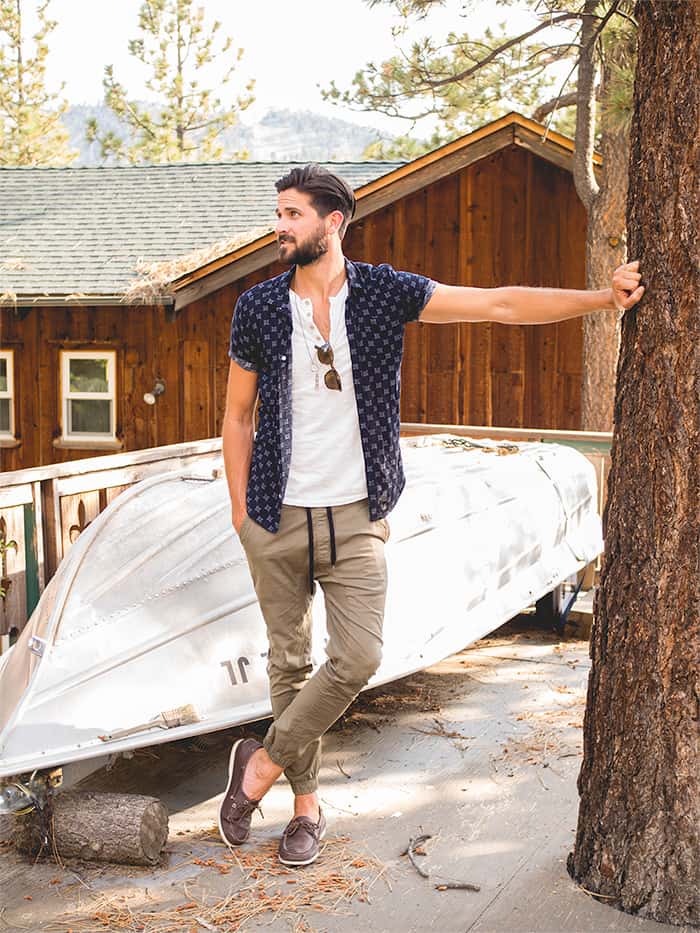 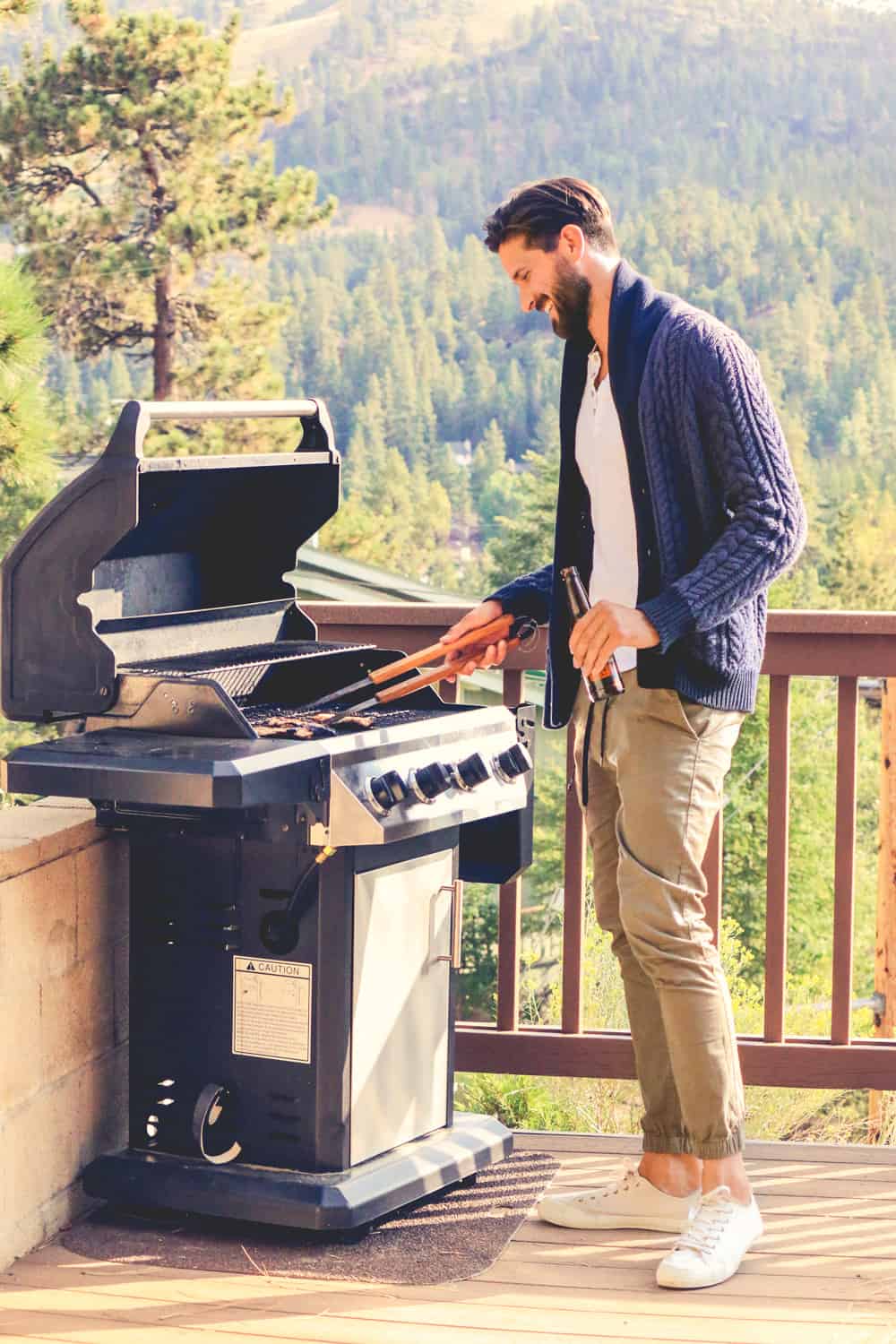 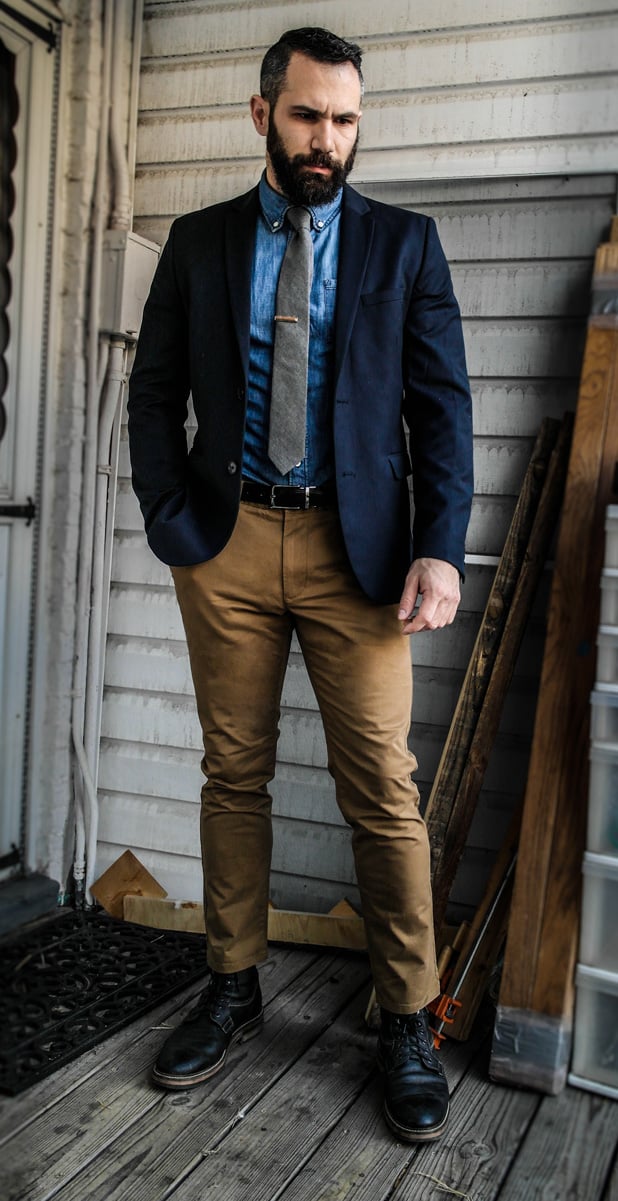 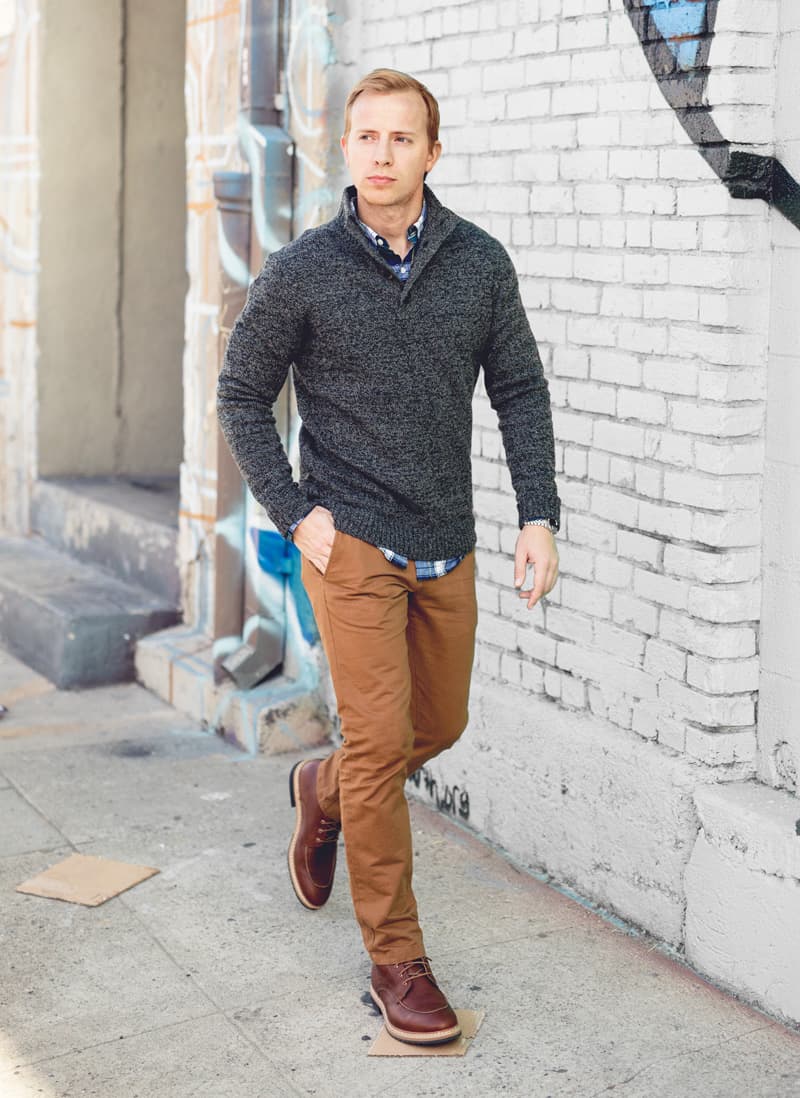 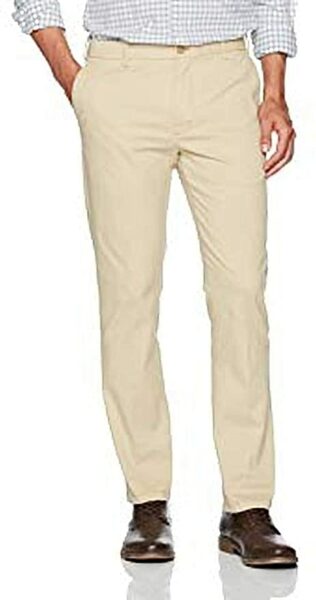 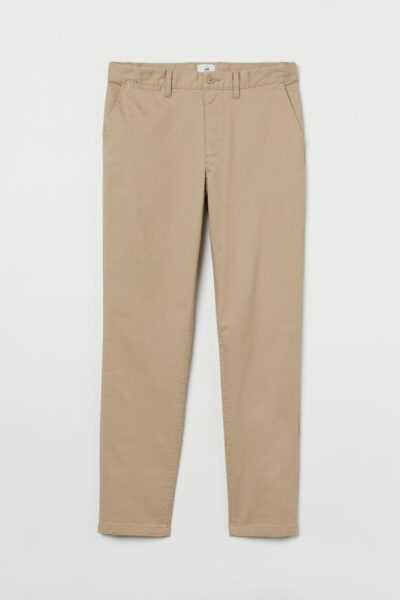 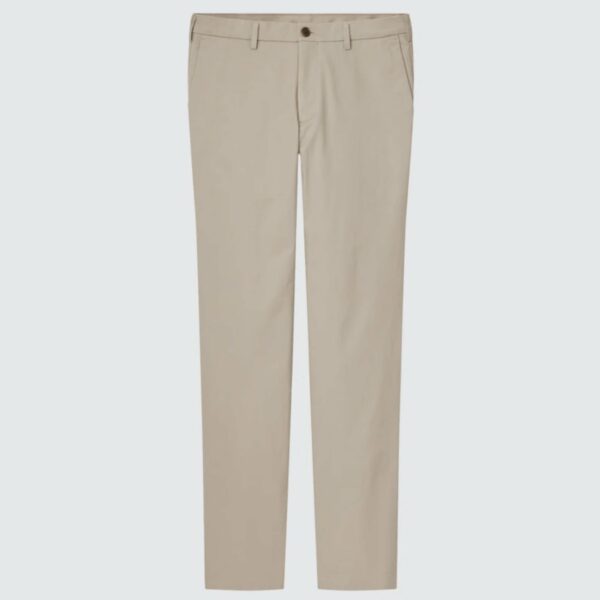 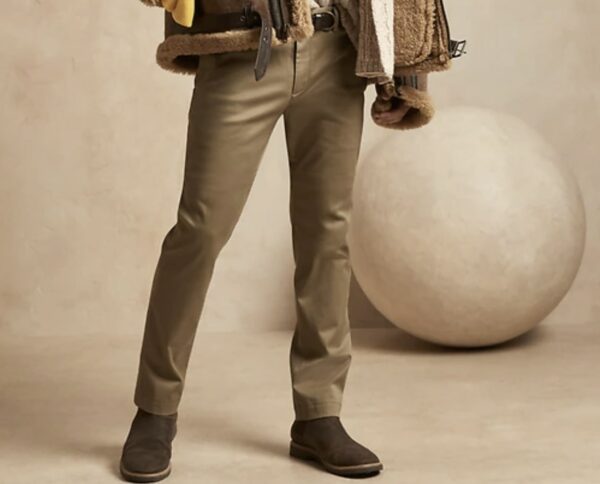 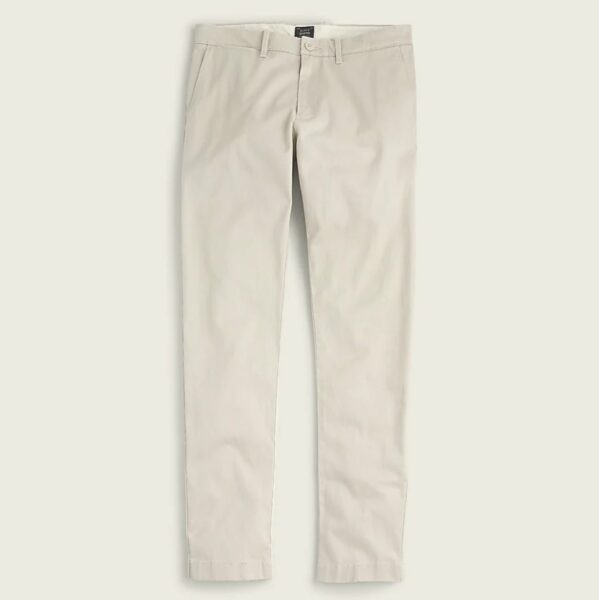 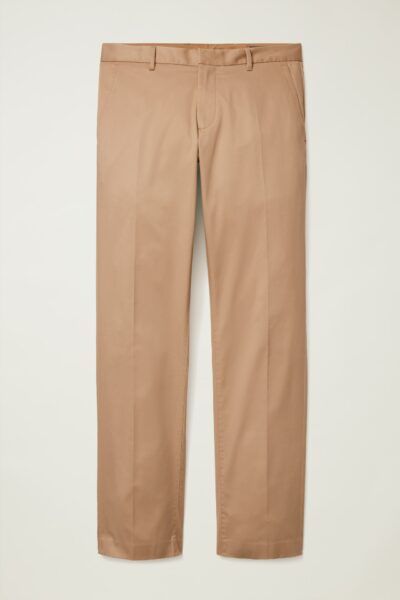 Spring StyleStyleStyle Essentials
Just in time for heavy winter weather, pick up new coats, jackets, and sweaters at off-season prices.
Be the talk of the town (or at least the watercooler) with one of these perfect gift swap ideas.
Bundling up doesn't end at your wrists.
Did You Miss These?
4 easy steps...number 3 is a doozy.
Serve drinks that don’t taste like paint thinner without breaking the bank
The most important, non-traditional guide to getting engaged you’ll ever read.
Bring your body and mind back into a relaxed state.
There’s no time like the present to check some names off your gift list.
Your kids need you; your phone doesn’t.
The last hurrah of the Black Friday sales weekend.
Black Friday is here. And we've put in some serious time distilling what's worth shopping and what's worth skipping.
Save on gifts and stock up on essentials.