Wes Anderson’s films are some of the most intricately designed films of the past two decades and “The Life Aquatic with Steve Zissou” is no exception. The film is a meticulously crafted homage to/piss-take on the classic scuba diving documentaries of Jacques Cousteau. The Life Aquatic is jam-packed with references to the French sea explorer, from the distinctive colored wetsuits (silver for Cousteau; light blue for Zissou) to their decommissioned minesweeper turned exploration vessel/production studio, there are references to Cousteau every few frames. One of Anderson’s more subtle homages (and my personal favorite) is found in the names of their ships. Cousteau famously sailed the world in the Calypso. Zissou’s ship is named the Belafonte. Harry Belafonte famously sang Calypso music. It’s just too damn clever.

A far less subtle homage can be found in the wardrobe choices made by Anderson and costume designer Milena Canonero for Zissou. Cousteau and his crew famously wore a red watch cap, usually paired with a light blue shirt, or in some cases just a pair of Speedos. And when you watch those old “Undersea World” episodes, they’re mostly in the Speedos. Either way, The Life Aquatic nails every aspect of this look and it’s a pretty easy one to draw inspiration from in day-to-day life. Even the Speedos, if that is your thing. The watch cap has a much longer history than you might think, going all the way back to the 1400s. Its simple, warm design was a staple of Royal Navy sailors who relied on its wool construction to keep warm on those long nights in the North Atlantic. That tradition passed down through the ages to the US Navy’s WWII-issued watch cap, which Cousteau and Zissou wore a variation of. Essentially, the watch cap has been a staple of men’s fashion for 600 years. 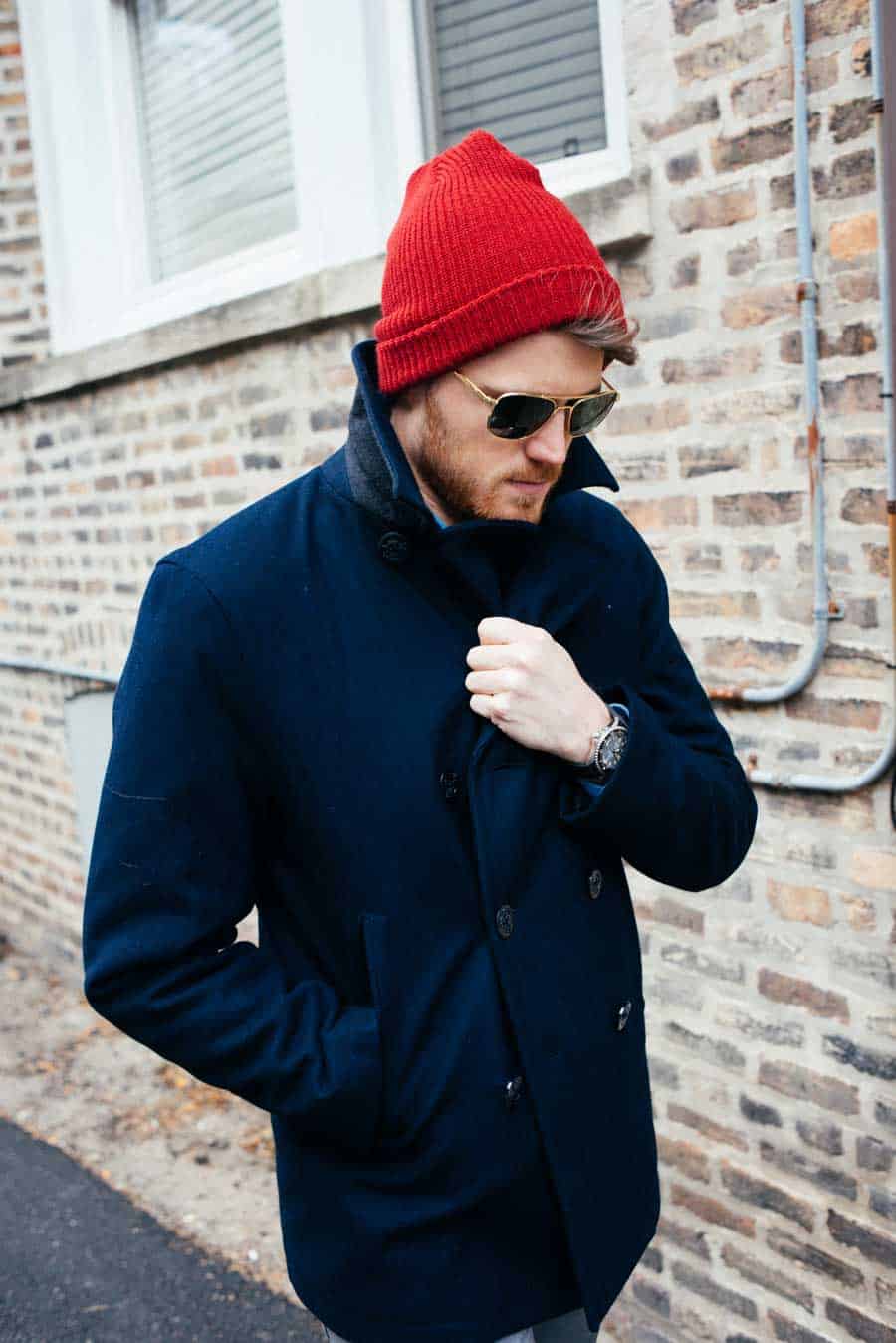 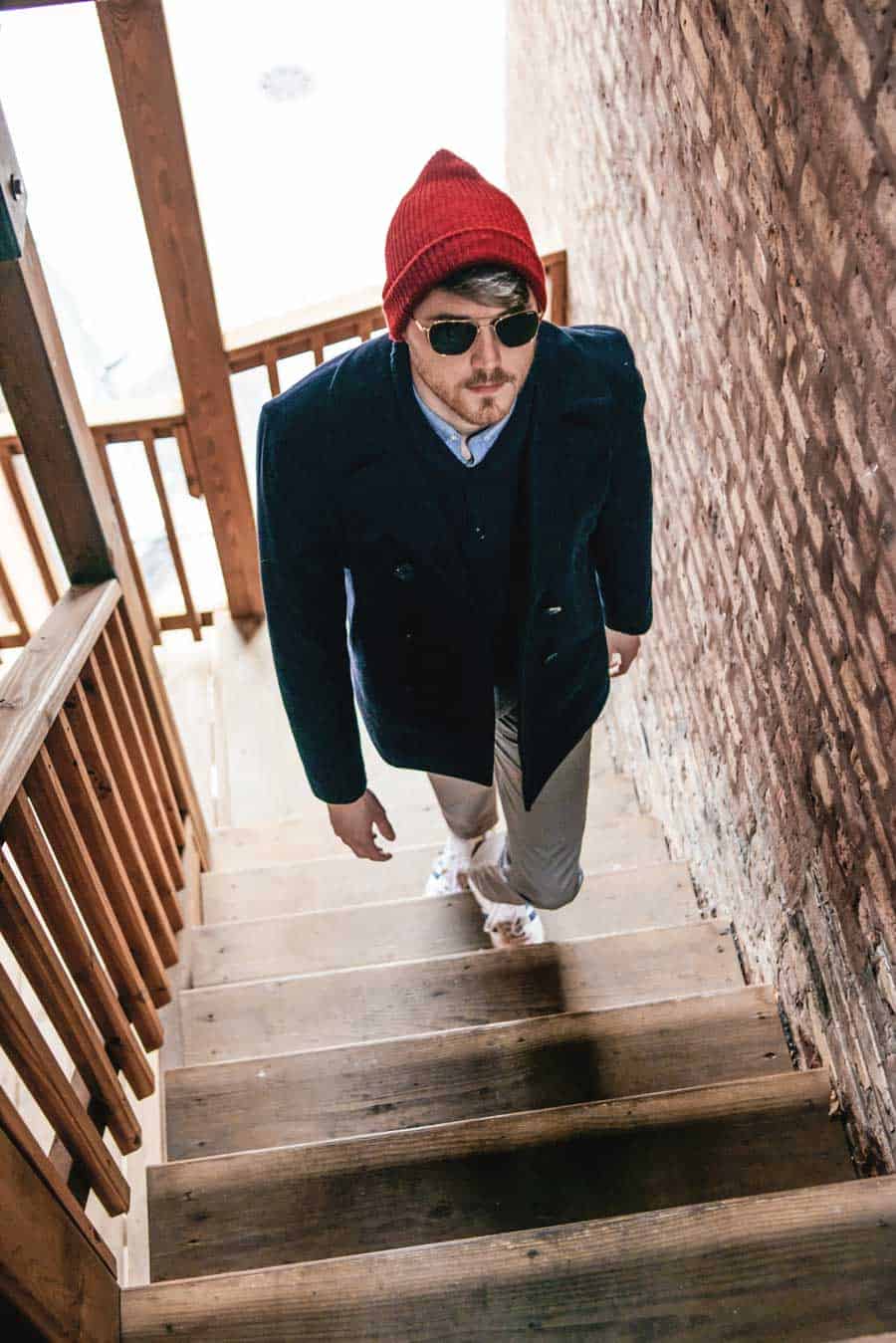 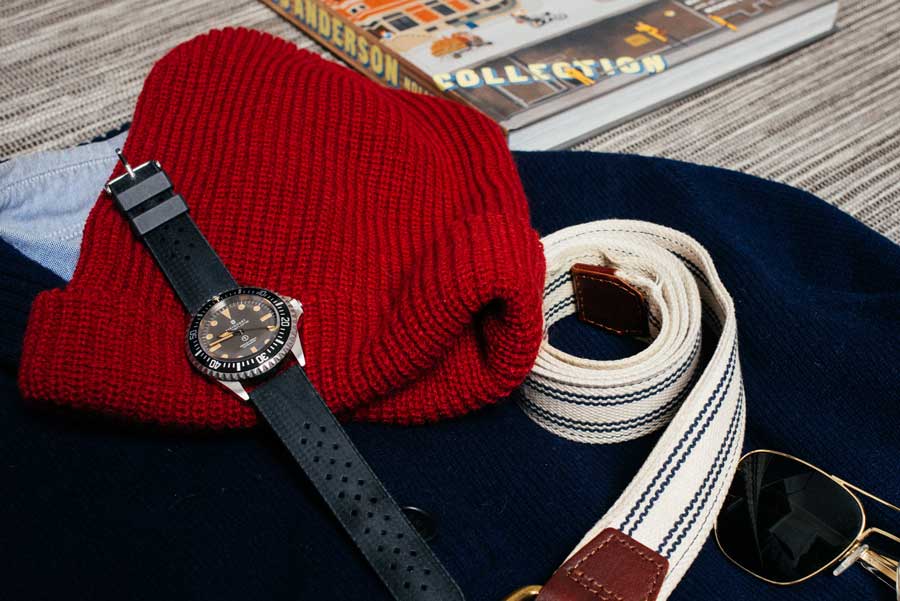 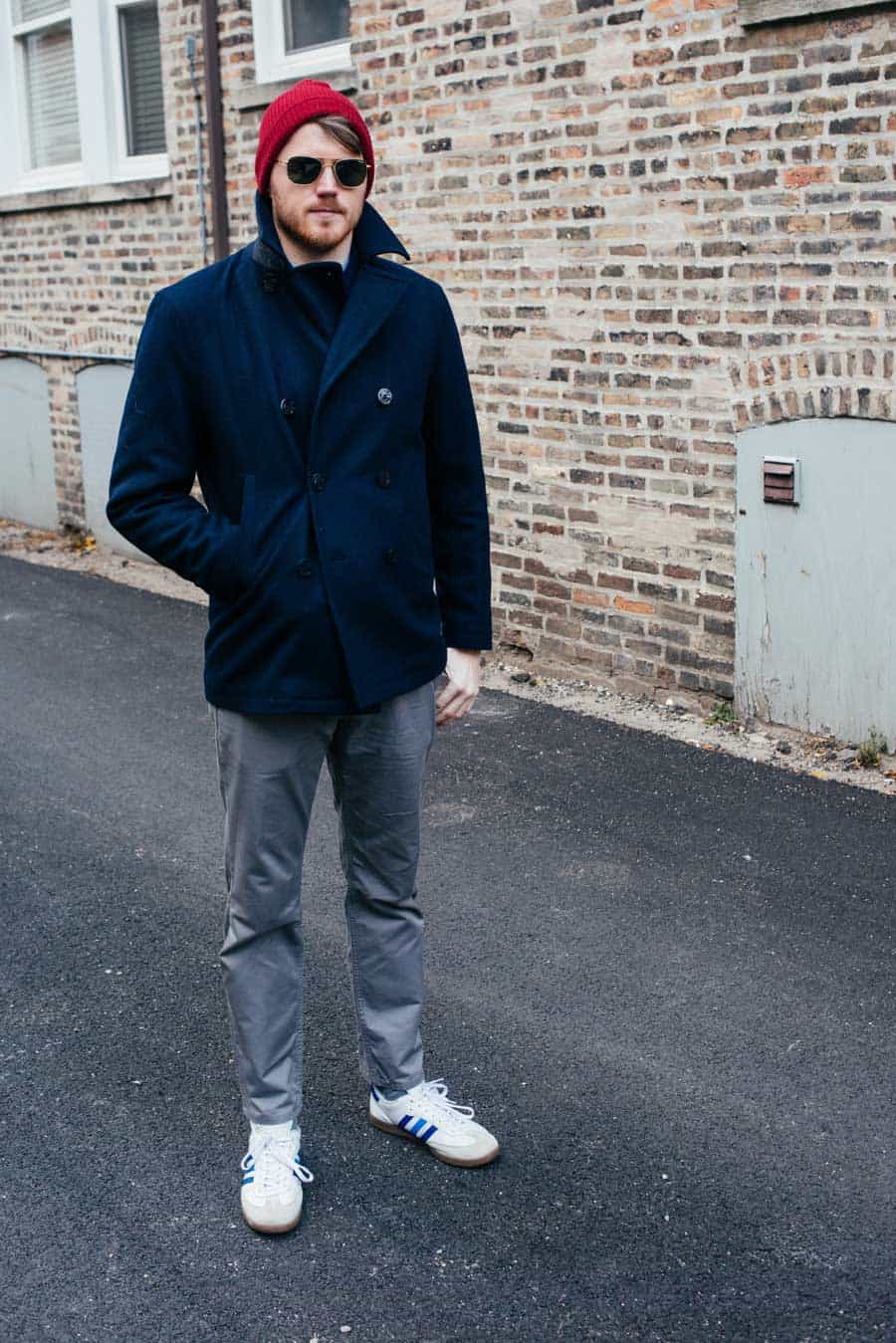 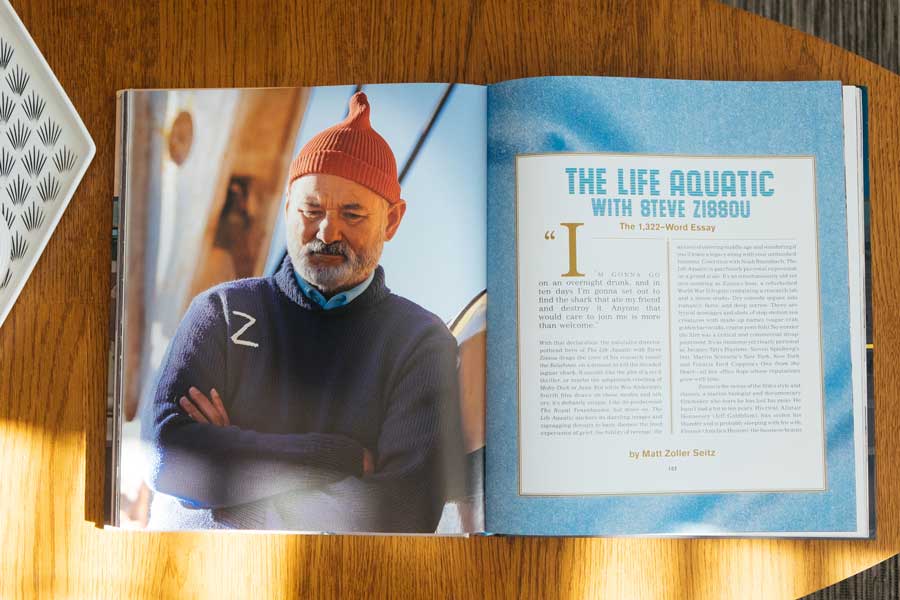 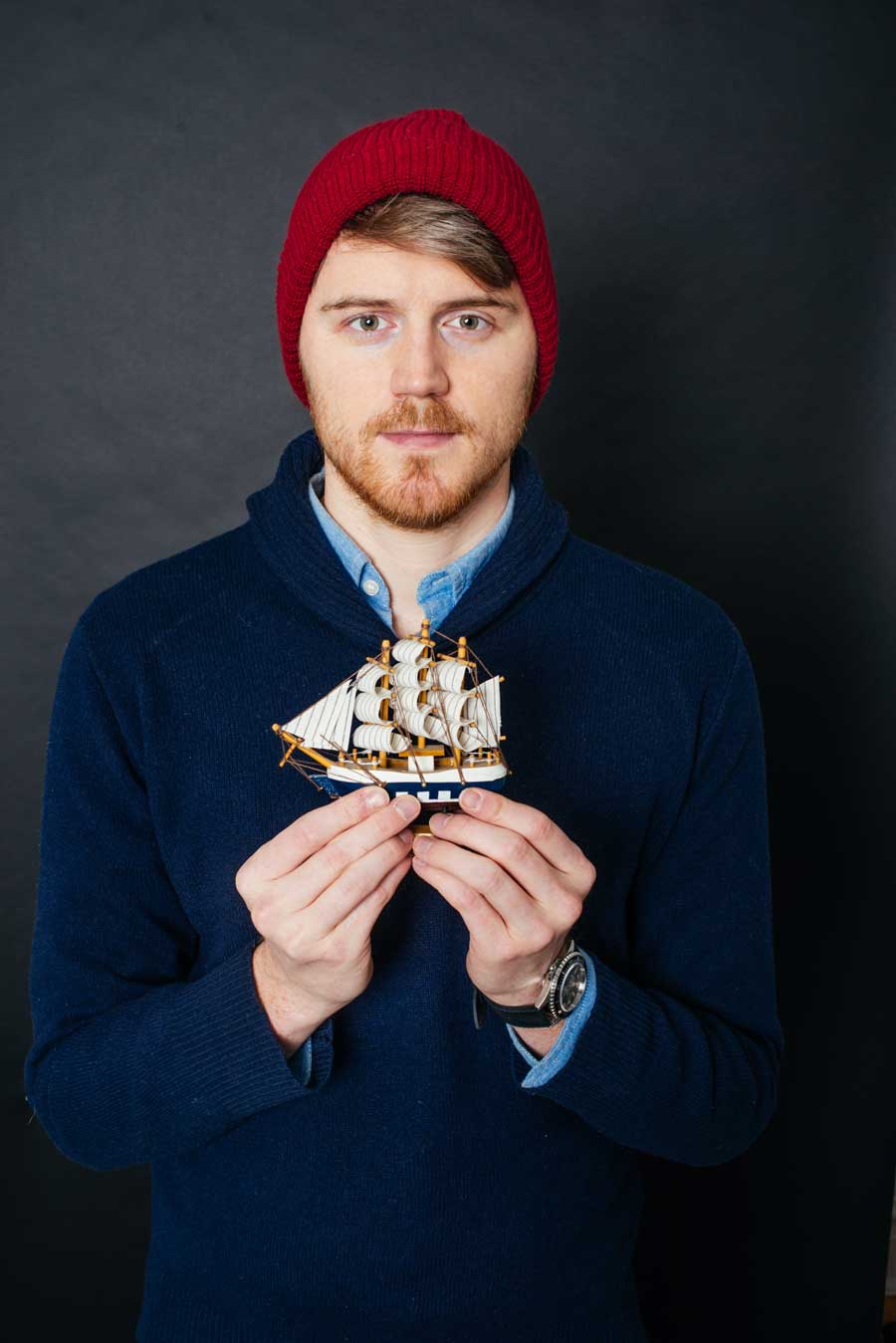 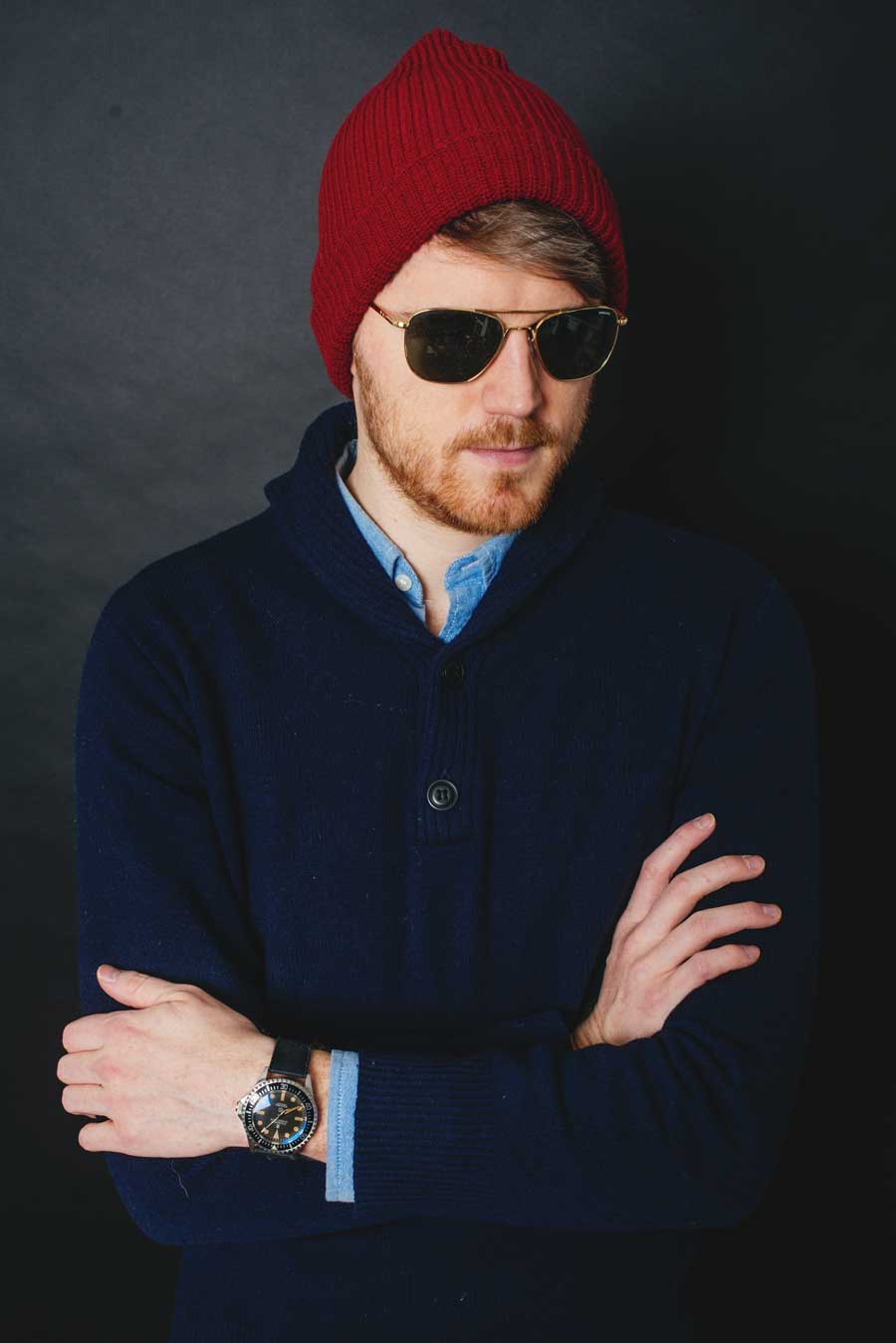 You can’t have a movie about scuba divers without touching on dive watches, and Zissou’s in particular is a quirky piece that is perfect for the world Wes Anderson is crafting. Zissou wears a Vostok Amphibia which originated as a watch made for the scuba divers of the Soviet Navy. Vostoks have gained a bit of a following due to their affordability and robust design. A Vostok Zissou is still on my list of future purchases. In its place, I went with a Steinhart Ocean Vintage Military which is instead an homage to the Rolex issued to the British Royal Navy in the late 60s and 70s.

Another distinct article of clothing that Zissou sports are his custom-made Adidas sneakers. Unfortunately, these were never actually manufactured for sale, but you can find custom-modified Sambas on eBay to get that Zissou look.

Since it’s winter time, we went with an old-fashioned peacoat with the classic anchor buttons to help keep us warm. The peacoat has been worn by sailors since the 1800s and is one thing that most guys have hanging in their closet.

If you’re looking for more information about the costume and production design in Wes Anderson’s films, I strongly recommend “The Wes Anderson Collection” by Matthew Zoeller Seitz. This is a deep dive (no pun intended) into Anderson’s film collection and includes a lot of photos that I’ve never seen before as well as some fantastic conversations with Anderson himself.

Check back tomorrow for another affordable look in our weeklong Menswear at the Movies series. And shop our Skyfall Scotland and Fantastic Beasts and Where to Find Them outfits!

Fall StyleLive Action GetupMenswear at the MoviesSmart CasualStyleThe GetupWinter Style
Lighten up your winter wardrobe.
Getting the perfect fit right off the rack is like winning the lottery. Whether you wear suits or selvedge denim, this guide demystifies the process of tailoring and alterations.
Discipline is a skill anyone can learn.
Did You Miss These?
Ready to upgrade your morning coffee? We’ll help you determine which of the 3 most common pour over brewers to start with.
Finally! Here is a woman to set us straight on what we're doing wrong when we talk to them. A guest post from communication coach Katrina Razavi.
Whether you're dressing up or going for comfort, the sweater is one of the most versatile pieces in a man's wardrobe.
Cutting through the confusion: A breakdown of common knife terminology.
You don't have to be a traumatized father fighting a fungi-based zombie apocalypse to wear this jacket.
We've researched the best men's winter coats, based on material composition, product rating, and price.
Life can be overwhelming - Here's a proven method used by fighter pilots to make smart decisions fast and stay on top of it all.
And how to build them in under 30 days.
Do these now to keep your style strong and simple.