The days have turned cool and wet here in the northeastern United States, and perhaps it’s that kinship with the fabled Scottish weather that has me wanting to mix drinks with their famed national liquor. Or perhaps it’s just that scotch is delicious. Either way, today we’re mixing up a fairly famous Manhattan variant named after a Scottish hero. No, not the Rob Roy, but instead a cocktail named after “the greatest Scot,” poet and lyricist Robert Burns.

Frequently referred to as the Bard of Scotland, Burns was an 18th-century progressive whose poetry leaned toward the political. He lived only for 37 years, but his output was substantial, and is still widely read today. Scotland is justifiably proud of their national poet, and many hold Burns Suppers—get togethers in which haggis, potatoes, and turnips are served and Burns’s poetry is read—around January 25th, the poet’s birthday. You can find these celebrations in America, too, if you’re curious!

The Bobby Burns cocktail, which marries scotch whisky, sweet vermouth, and Benedictine, shows up in the Savoy Cocktail Book, but may predate that title’s publication. The Benedictine is sometimes replaced with Drambuie, which makes sense … Drambuie’s based on scotch. You can use either, but I have a mild preference for Benedictine, so that’s what I’ve gone with. I like to use a blended scotch like Usquaebach or Black Bottle for this drink—they tend to be a little milder and less individualistic than single malts (especially smoky Islay offerings), and thus play better with the other ingredients. Still, if you’re a Lagavulin or Laphroaig drinker, don’t hesitate to give them a shot in this one!

Items in parentheses are what I used when making this drink, and are included as recommendations. Thanks to Wikipedia for some general background on Robert Burns. 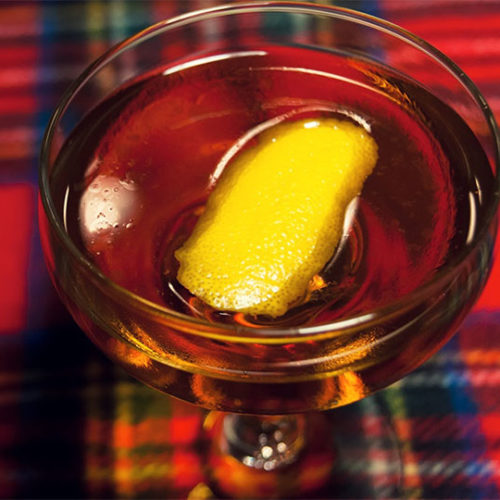 Cocktails & AlcoholIt’s Friday…Have a Drink
Great, dressier summer style at an attractive price.
Summer Wedding ✓Office ✓ Looking like Model ✓
Look forward to dressing sharp when it's sweltering.
Did You Miss These?
12 ways to wear the most versatile piece in your wardrobe.
Primer's No-B.S. review of the Why's and How's of male pattern baldness -- and what you can do about it.
It's time to kick things into overdrive. We'll show you how.
To master your life, you have to master yourself first.
Simple and very effective.
Add a new option to your rotation.
The best Father's Day gifts (that aren't a "#1 Dad" mug).
When you find a staple that works for you, upgrade to a version that features unique design details, premium materials, or sustainable construction.
Let's do summer on purpose.