I gave Scotland some love in our last article, so why not give its neighbor a nod this week? The days have turned short, grey, and cold up here, so warming drinks are always a good idea, and this one’s a classic. It may not be as fancy as some of the drinks I’ve featured in this column, but so what? Irish Coffee is simple, straightforward, not difficult to make, and delicious.

Mixing liquor with coffee doesn’t originate with this drink, and in fact goes back at least to the mid-eighteenth-century (and likely much earlier), when European coffee houses served a wide variety of coffee-based drinks spiked with spirits. Still, this cocktail—created in 1943 by Joe Sheridan, who was the head chef at the airport restaurant at Foynes in County Limerick at the time—has become the best-known example. The Irish Coffee then took another eight or nine years to make it to the US, where it began to grow in popularity, becoming a staple at just about any pub you’ll find on this side of the Atlantic.

Interestingly, the original recipe for this drink calls neither for whipped cream, nor for another ingredient that’s become a common addition: Bailey’s Irish Cream liqueur. Instead, the coffee is sweetened with a good amount of sugar (the IBA standard calls for brown sugar, so that’s what I’m using). This changes its surface tension, which allows thick, but non-whipped, cream to rest on the top of the drink. The coffee is then drunk through the layer of cream.

The key to this drink, as with all drinks, is quality ingredients. Dump some sugar into a cup of gas station coffee that’s been sitting on the burner for four hours, then throw some old cream on top, and be prepared for disappointment. Instead I recommend making a fresh pot (or French Press, or espresso pull, or whatever method you like) using fresh, high-quality beans. You don’t need to make a ton; you’re looking for a 2:1 ratio of coffee to whiskey, here. Also, I’d recommend decaf, since most of us do our drinking at night, but that also is your call.

If you’re having trouble getting your cream to float, try holding a spoon against the edge of the glass, convex side up, and pouring the cream gently on top of it. If that still doesn’t work, well, I won’t tell anyone if you want to beat the cream a little to thicken it. Just try to avoid using a spray-can full of whipped topping; it’s really not the same experience.

Items in parentheses are what I used when making this drink, and are included as recommendations. Thanks to Wikipedia for some general historical information. 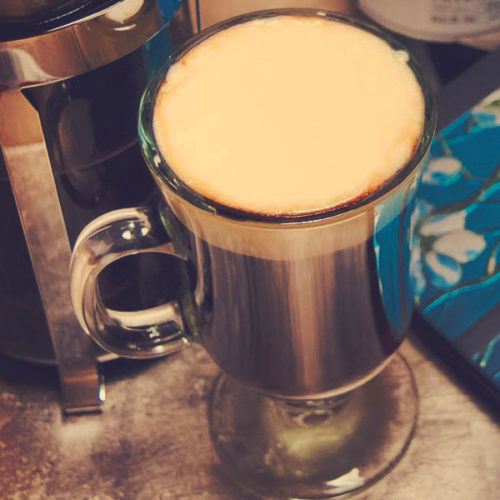 Cocktails & AlcoholIt’s Friday…Have a Drink
Getting the perfect fit right off the rack is like winning the lottery. Whether you wear suits or selvedge denim, this guide demystifies the process of tailoring and alterations.
Discipline is a skill anyone can learn.
Cutting through the confusion: A breakdown of common knife terminology.
Did You Miss These?
So they're saying it's a buyer's market but you, like most, are without a grocery list when it comes to stocks. Learn how to play it safe, relatively speaking, by focusing your attention and cash ... [more]
The day has come and the responsibility falls on your shoulders: The waiter asks the table if you'd like to start with wine and all eyes turn to you. We've got you covered.
No luggage fees, no wrinkles, more stuff. Learn how to properly pack a suitcase.
You don't have to be a traumatized father fighting a fungi-based zombie apocalypse to wear this jacket.
We've researched the best men's winter coats, based on material composition, product rating, and price.
Life can be overwhelming - Here's a proven method used by fighter pilots to make smart decisions fast and stay on top of it all.
And how to build them in under 30 days.
Do these now to keep your style strong and simple.
If you want to know how some rich actor gets in amazing shape, you're in the wrong place.