Ah, summer, a great time for kicking back on the porch and enjoying a cool beverage. If that beverage happens to be a classic cocktail that helped to kick-start America’s ongoing love affair with vodka (still by a wide margin the best-selling spirit in this country), then all the better! The Moscow Mule is a simple combination of ingredients, but don’t let that fool you; it’s a nice little potion that can be adjusted to your liking, whether you’re looking for a light tipple or something with a little more oomph.

The Moscow Mule is commonly associated with Smirnoff vodka, and with good reason; the drink was heavily promoted by John G. Martin, president of G.F. Heublein Brothers Inc, who’d secured the rights to distribute the vodka in America. In the early 1940s, ginger beer was enjoying something of a popularity spike. Martin toured the country relentlessly, convincing bartenders to make the drink and to pose with it—holding up the copper mugs he insisted it be served in—for photographs.

Soon the beverage was enjoying a moment, not unlike the mojito experienced in the mid-2000s, where you could find it readily available at just about every bar in the country. This, along with Smirnoff’s infamous “It Leaves You Breathless” ad campaign (which insinuated that you could get in a drink or three at lunch without anyone smelling it on your breath), was an instrumental part of vodka’s conquering of American drinking culture. The key to a good Moscow Mule is a good ginger beer. Don’t waste your time with ordinary ginger ale. The real stuff has bite too it and can stand up to being diluted by the vodka and the ice. Reed’s makes an excellent ginger beer that comes in both regular and extra strength. I like the latter for this drink—it’s got some real burn!—but if you’re new to ginger beer, you might want to start with the regular. 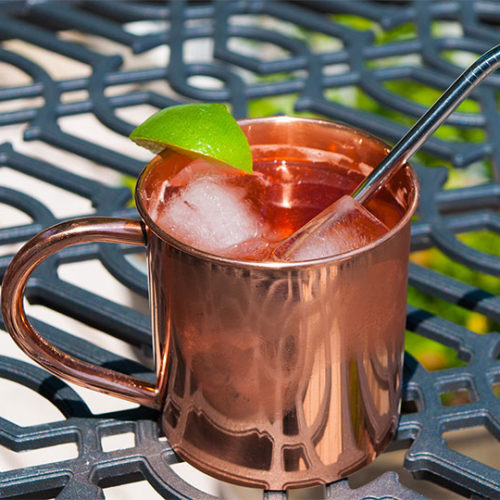 Cocktails & AlcoholIt’s Friday…Have a Drink
Great, dressier summer style at an attractive price.
Summer Wedding ✓Office ✓ Looking like Model ✓
Look forward to dressing sharp when it's sweltering.
Did You Miss These?
Before you toss them out in favor of a new pair, try this easy method for cleaning white sneakers.
The best way to shape your own story is to read someone else’s.
A checklist for the in's and out's of traveling for work.
To master your life, you have to master yourself first.
Simple and very effective.
Add a new option to your rotation.
The best Father's Day gifts (that aren't a "#1 Dad" mug).
When you find a staple that works for you, upgrade to a version that features unique design details, premium materials, or sustainable construction.
Let's do summer on purpose.