My wife and I had some open sparkling wine, and it would’ve been a shame to let those bubbles go to waste, so I made a sparkling cocktail! This is one of my favorites, for a few reasons. One: it has bourbon in it, and it’s hard to go wrong with bourbon. Two: it has FOURTEEN dashes of bitters in it, which you would think would make it nigh undrinkable.

You’d be super wrong, though. The Seelbach is delicious. It’s also got an interesting history, which I am able to recount here thanks to Ted Haigh’s Vintage Spirits and Forgotten Cocktails.

Created in 1917 at the Seelbach Hotel in Louisville, KY, the drink was rescued from post-prohibition obscurity by Adam Seger, who was the hotel’s restaurant director, and found the recipe in the hotel’s records in 1995. Gary and Mardee Regan (of Regans’ Bitters fame) convinced him to share it with the world in one of their cocktail books, and we’re very lucky they did! 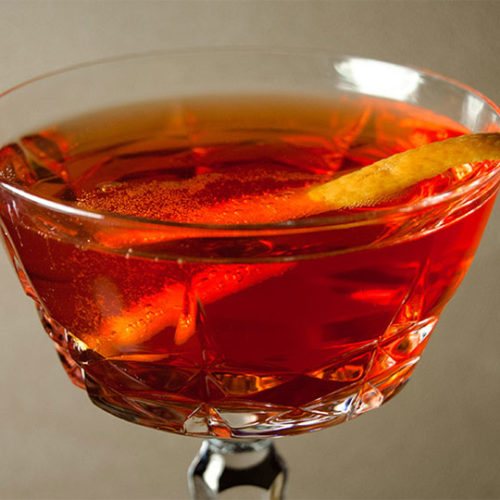 Cocktails & AlcoholIt’s Friday…Have a Drink
For Craig's final Bond film, he breezes by the classic English and Italian jacket options and goes straight for rugged Americana.
Clean design and precision German craftsmanship: An introduction to Nomos watches.
Let the Bond marathon begin.
Did You Miss These?
History, style gallery, brand picks
Do you find yourself lying awake at night, fretting over things like the kid you made fun of at recess 18 years ago or that stupid thing you said in the elevator yesterday? We all do it, and it's ... [more]
Use these simple techniques to tame your wardrobe in 30 minutes or less.
A collection of deal finds you don't want to miss.
An intentional balance of dressed up and down that lets you go anywhere.
Classic cool that lands all its punches.
Made in France since 1927, Paraboot's iconic – and divisive – silhouettes have come back around.
Layering up doesn't require you to be loaded.
Fall is coming. Let’s be ready this year.