It’s the holidays, which means it’s nog season. For many, that means a dose of ultra-thick, syrupy goop that comes out of a cardboard carton and has a shot of bourbon or rum dropped into it. I think we can do better than that, but at the same time, I’m incredibly lazy. So I wanted to avoid recipes that involved cooking a kind of custard (many eggnog recipes basically have you make crème anglaise, first, which is absolutely delicious but time consuming) and also to avoid recipes that require you to beat the egg whites to soft peaks.

This is not to say those recipes are bad. Quite the opposite, actually, and if you’re having a party and making eggnog for a ton of people, then I absolutely recommend finding a recipe that has you do both of those things. Your eggnog will be light and fluffy and creamy and delicious. But for a single serving or two, it does seem a little crazy to spend that much time and generate that many dirty dishes!

So … here’s a very tasty eggnog recipe, adapted from the one found in Dale DeGroff’s fantastic book The Craft of the Cocktail. It keeps the ingredient list to a relative minimum, and only requires one bowl, one whisk, and standard cocktailing equipment. You can even skip the bowl and whisk and just dry-shake the hell out of the eggs and milk, but that can get a little tiring on the old arms.

As usual, the standard disclaimer about raw eggs applies: if you use fresh eggs that have been kept cold and don’t let the nog sit out for hours, you have an almost nonexistent chance of food-borne illness. Still, if the idea makes you squeamish, you can buy pasteurized eggs in most grocery stores these days (the liquid eggs that come in cartons are also pasteurized). They’ll work fine.

This recipe makes a huge glass of eggnog, but if you’re like me, you don’t really need that much of the stuff all at once. Split into cocktail glasses, it comfortably serves two. 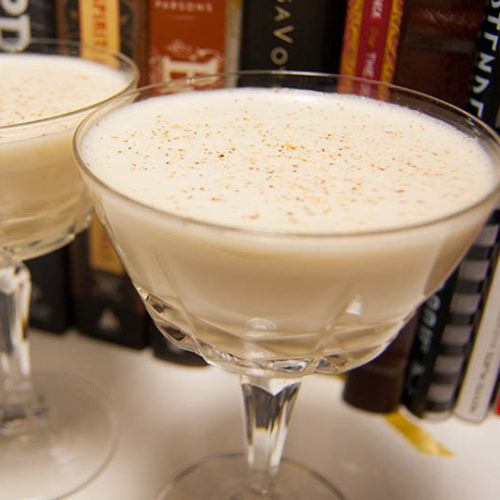 Cocktails & AlcoholIt’s Friday…Have a Drink
Lighten up your winter wardrobe.
Getting the perfect fit right off the rack is like winning the lottery. Whether you wear suits or selvedge denim, this guide demystifies the process of tailoring and alterations.
Discipline is a skill anyone can learn.
Did You Miss These?
Buying a suit isn't just deciding on a color. Learn the different options you'll be faced with and which to choose.
Trends come and go -- time to clean out these 11 items from your closet.
The best way to shape your own story is to read someone else’s.
Cutting through the confusion: A breakdown of common knife terminology.
You don't have to be a traumatized father fighting a fungi-based zombie apocalypse to wear this jacket.
We've researched the best men's winter coats, based on material composition, product rating, and price.
Life can be overwhelming - Here's a proven method used by fighter pilots to make smart decisions fast and stay on top of it all.
And how to build them in under 30 days.
Do these now to keep your style strong and simple.