It's October, a month forever in heated combat with May as my favorite month of the year. Temperatures are cool but not freezing, the trees haven't lost all of their leaves yet, the days aren’t too short, the NBA starts back up, football's going strong, the only baseball that matters is being played, and then we get to Halloween, one of the three best holidays of the year. In celebration, I've prepared what is, in the northeastern US at least, a very common October drink: mulled, spiked apple cider.

A few quick notes about the liquors involved: the nice thing about aged rum is that it’s not too pricey. A twelve-year, which is probably overkill, will likely only set you back about 35 bucks. If that’s still too steep, you could definitely use a nice, inexpensive rum like Plantation Barbados 5-year here. As for the Calvados, you have two cost-saving possibilities. One is to ditch it entirely and just double the rum. The other is to buy a bottle of Laird’s Applejack for fourteen bucks and use that!

You can safely double this recipe on the liquid side without needing to change the amount of spices, but if you scale up past three servings, start adding more spices to balance. Don’t feel like bundling up the mulling spices yourself? You can buy teabags with spices in them at most grocery stores, or on Amazon.com. 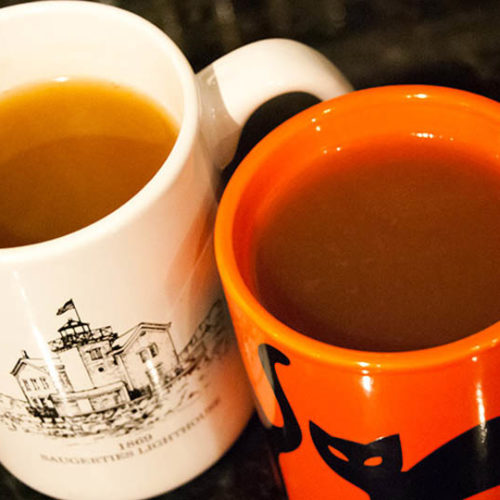 Cocktails & AlcoholIt’s Friday…Have a Drink
Getting the perfect fit right off the rack is like winning the lottery. Whether you wear suits or selvedge denim, this guide demystifies the process of tailoring and alterations.
Discipline is a skill anyone can learn.
Cutting through the confusion: A breakdown of common knife terminology.
Did You Miss These?
A quick overview of 8 great print patterns for adding “visual texture” to your home decor.
Traditional men's magazines are full of “required” man-skills like felling a tree or leaping from a moving car. We think it’d be better to learn some skills that could actually better our lives ... [more]
Bargaining tactics: These science-backed negotiating strategies will help you get what you want.
You don't have to be a traumatized father fighting a fungi-based zombie apocalypse to wear this jacket.
We've researched the best men's winter coats, based on material composition, product rating, and price.
Life can be overwhelming - Here's a proven method used by fighter pilots to make smart decisions fast and stay on top of it all.
And how to build them in under 30 days.
Do these now to keep your style strong and simple.
If you want to know how some rich actor gets in amazing shape, you're in the wrong place.