sidebar_content
Skip to Main Navigation Skip to Content
You only get one chance to make a first impression – use these simple principles to make your cover letter pack all the punch that it can.
11 October,2022By Gordon Brown
This post may contain affiliate links, read about our editorial promise

“What about cover letters?”

It’s a question I’ve heard more times than I can count my eight-years as a vocational counselor, and one that’s still well-worth asking. As tough as it can be to craft the right kind of resume, cover letters can be even more confusing. Regardless of where you are in your career, you’re probably all-too-familiar with that Upload option lurking at the start of most applications and the questions that come along with it.

It says “optional” – should I even bother with it? What exactly am I supposed to put on a cover letter? How long should a cover letter be? Is it really going to make any difference? What if I screw it up?

While there’s no shortage of information out there, sorting the helpful tips from the harmful can be a chore unto itself – which is where Primer has your back. Drawing on nearly a decade of experience (and cover letter critiques reaching into the quadruple digits), we’ve developed a step-by-step, no-nonsense guide to crafting your cover letters and using them well. The same principles that have helped hundreds get their feet in the door can work for you as well. It all begins with understanding…

Think of it this way: if you’re a feature-length movie and your resume is a theatrical trailer, then your cover letter is a five-second ad on YouTube – something to capture a viewer’s attention and persuade them to learn more. It might sound simple – maybe even obvious – but it takes more than a little effort to condense your value, passion, and potential into a few lines of text (and you will need to condense it).

The 4 Principles of Crafting a Perfect Cover Letter:

Be Brief (and Find Your Angle)

…Which is easier said than done.

If you’re not sure what’s going to impress the employer, you might feel tempted to throw everything at the wall to see what sticks. Your employment history, your abilities, and talents, your shameful and incorrect opinion that the Game of Thrones finale was actually OK. Surely something in that page-long plea is going to catch their eye, right?

Make no mistake – even if you see cover letter examples that extend for paragraphs, there’s no better way to kill an employer’s interest than by burying them under an avalanche of text. At the very best of times, you’re going to be up against their limited attention span.

At worst (and more realistically), you’ll be competing against dozens of other applicants for the same position, all of whom have similar backgrounds and skill sets. Diluting your best attributes in a sea of words and trying to patch up gaps with filler is going to make you less memorable, not more.

How long should a cover letter be?

Well, that’s going to come down to a number of factors.

A position that attracts fewer applicants due to its specialization is probably going to give your letter a bigger share of the employer’s limited time. The type of job will make a difference as well – technical positions are more interested in your concrete abilities and experience than your ability to express yourself in writing.

Although some may advocate a three-paragraph format (with an intro, a body, and a closing point) even that may need to be trimmed down for the modern employer.

As difficult as it might be, you will need to streamline your letter. Let the employer know your name, the position you’re going for (don’t let them stick in you the wrong pile by mistake), and a few key pieces of information that will suggest you’re both qualified and unique (such as the number of years you’ve been in this field plus one or two additional points (such as another language, an area of specialization, or a proven ability to negotiate – numbers and percentages included).

In simplest terms, keep your very strongest points and jettison the dead weight. If it doesn’t sell you, it needs to go.

What to Include in a Cover Letter

Though there may be some slight overlap in terms of your achievements, your cover letter is not a summary of your resume.

Offering the employer a run-down of your resume is going to discourage them from looking any deeper – the equivalent would be summarizing the plot of an entire novel before asking someone to read it.

You risk the employer making a snap-decision off of a watered-down list of your abilities and deciding not to dig any further. If you are lucky enough to be given a second glance, there’s a good chance they may think they know all the important points already and simply skim.

Your cover letter is here to cultivate curiosity, not to satisfy it.

How exactly is that done? There’s no single answer, but an effective technique is to simply place yourself in the position of the employer. If you were hiring for that position, what quality or characteristic would make an applicant stand out?

What would someone have to tell you – in the space of thirty seconds – to make you put down your pen and think “this is someone I want to know more about”? 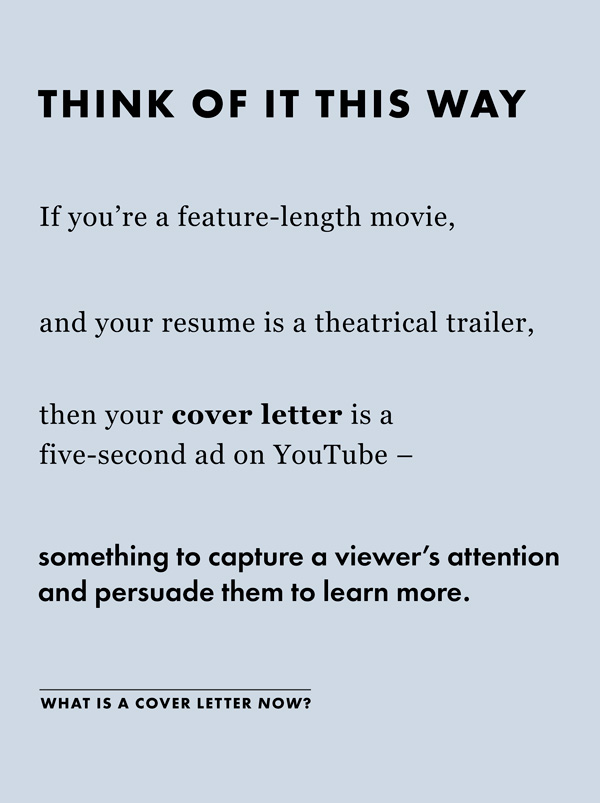 Fix Your Gaps, Don’t Excuse Them

A common belief about cover letters is that they give you an opportunity to address any gaps or blemishes in your employment history. At first glance, it seems to make sense. Why not talk about any indiscretions on your own terms? Why not get out in front of anything which might raise a red flag?

Because most of those flags can be taken down to begin with.

Imagine you’re trying to sell a house, and as you meet the prospective buyers in the driveway, you pause and tell them, “So, before we go inside, I just wanted to explain the orangutan-shaped hole in the roof over the master bedroom…”

You might have a brilliant explanation for what happened. It might be eloquent, profound, and moving. But no matter how good your justification is, it’s not going to keep that negative image from sticking in their heads like gum under a classroom desk. It’s not going to change the fact that you should’ve just fixed the damn roof first.

The exact same principle applies to the cover letter.

Barring some truly extenuating circumstances, don’t let your first contact with the employer highlight the worst parts of your experience. Got gaps in your work history? Use creative resume tricks and formats to fill them.

Pensive about your past? Scrub your social media. Don’t waste your time talking about how you got better, tell them what makes you the best.

Remember the Only Thing That Matters

For all the formats out there, a cover letter is only as good as its ability to sell you. You can break every rule (yes, even the ones here) – if the cover letter markets you, that’s all that counts. Keep in mind that what works for one employer (or even one industry) is not necessarily going to work with someone else, and you should always be tweaking your resume rather than looking for the perfect, catch-all combination of wording. The best cover letter is one that can easily evolve.

What’s that look like in action? Consider the following example:

Dear Hiring Manager,My name is John Doe and I’m deeply interested in the office admin position you presently have open on your website. I bring with me seven years of passionate experience in administrative and clerical positions, with exceptional quality management experience.

In my past position, I increased productivity by 50% in my previous position by streamlining SOPs. Beyond my QMS abilities, I speak conversational Spanish and am presently taking project management coursework through Quendelton State.

I know that my dedication and proven abilities make me a perfect fit for your company, and I’m eager to deliver the same fantastic results for you as I have for past employers. Thank you very much for taking the time to look over my resume – I look forward to a chance to speak with you soon.

That message is scarcely over a hundred words long but manages to relay the applicant’s name, target position, qualifications (complete with numbers), and unique features – all tied off with the promise to bring the same degree of excellence.

No frills, no exposition, no apologies. Character is being shown here, but it’s being backed up with hard evidence. Will it work everywhere? Not at all, but the benefit of this style is that it lets you easily swap-out selling points, and expand (or even condense) without starting from scratch each time.

There might not be a silver bullet when it comes to your cover letters, but with these principles in action, you can earn yourself a closer look. Whether you’re shooting for your dream job or just looking to climb the next rung of the ladder, that second glance can make all the difference in the world.

Have you had amazing results from a cover letter in the past? What tactics have you used to get to the next level of scrutiny? Share your tips and hints with other readers in the comments below!

Career DevelopmentHow to Find a JobWork Life
Lighten up your winter wardrobe.
Getting the perfect fit right off the rack is like winning the lottery. Whether you wear suits or selvedge denim, this guide demystifies the process of tailoring and alterations.
Discipline is a skill anyone can learn.
Did You Miss These?
Because you shouldn't be wasting your job seeking time formatting a resume.
The right book is to a man’s potential what gasoline is to fire.
Most men see patterns and run for the hills. Patterns don't have to be scary and when used properly they will only enhance a lackluster wardrobe. Learn how to identify and wear the following ... [more]
Cutting through the confusion: A breakdown of common knife terminology.
You don't have to be a traumatized father fighting a fungi-based zombie apocalypse to wear this jacket.
We've researched the best men's winter coats, based on material composition, product rating, and price.
Life can be overwhelming - Here's a proven method used by fighter pilots to make smart decisions fast and stay on top of it all.
And how to build them in under 30 days.
Do these now to keep your style strong and simple.