sidebar_content
Skip to Main Navigation Skip to Content
Proving the right boots can have many different sides, just like you.
12 December,2017By Andrew Snavely / Photos By Andrew Snavely
This post may contain affiliate links, read about our editorial promise 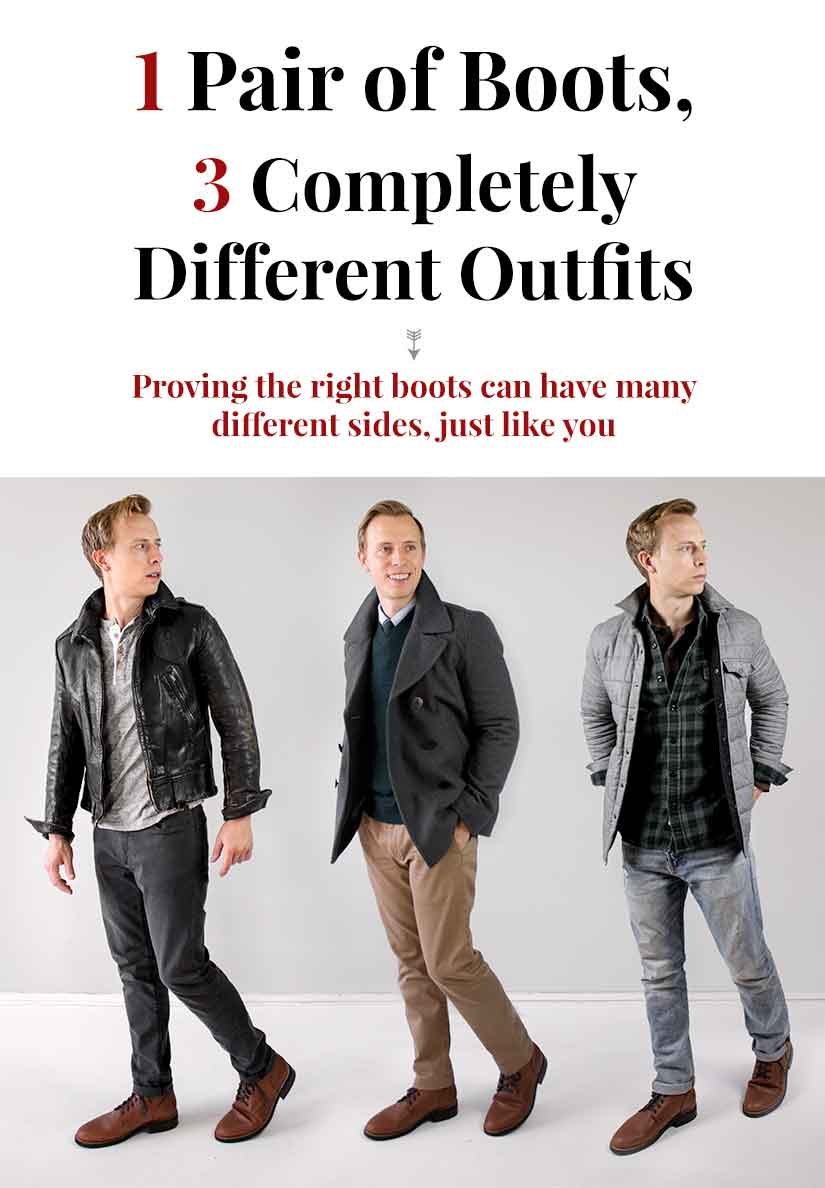 This is not the article I originally wrote.

The initial draft was about how the right pair of boots can work for a range of personal styles. Preppy to street style to rugged to dressed up. Sometimes it’s hard to see that, and so I took a bunch of photos showing how I was able to create 3 different outfits with completely different aesthetics with just one pair of boots.

But then, while I was looking at the photos I thought of something funny and sent it around to a few friends. I realized the photos looked like bio cards for what people yearn for in boyfriends and then husbands. 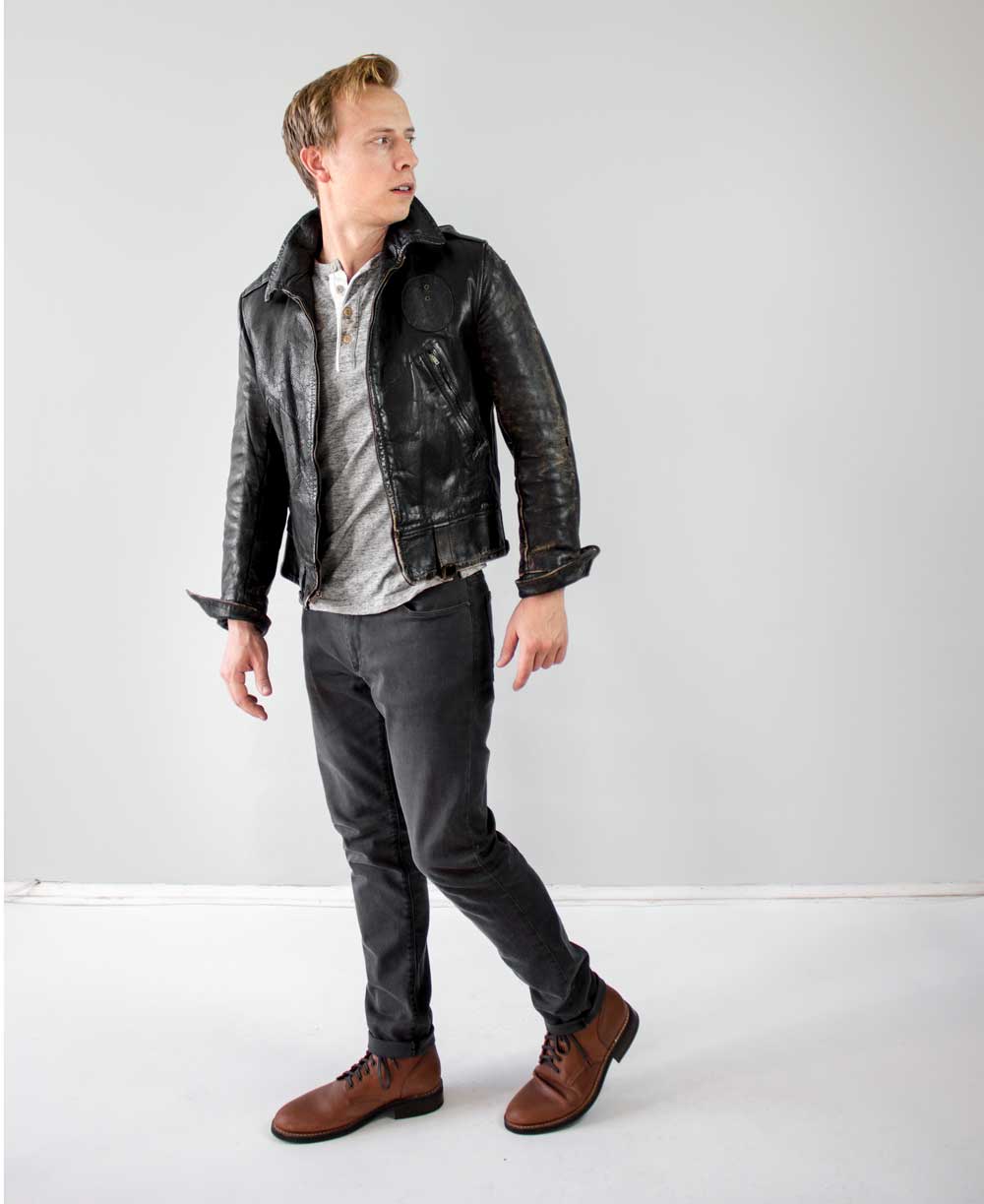 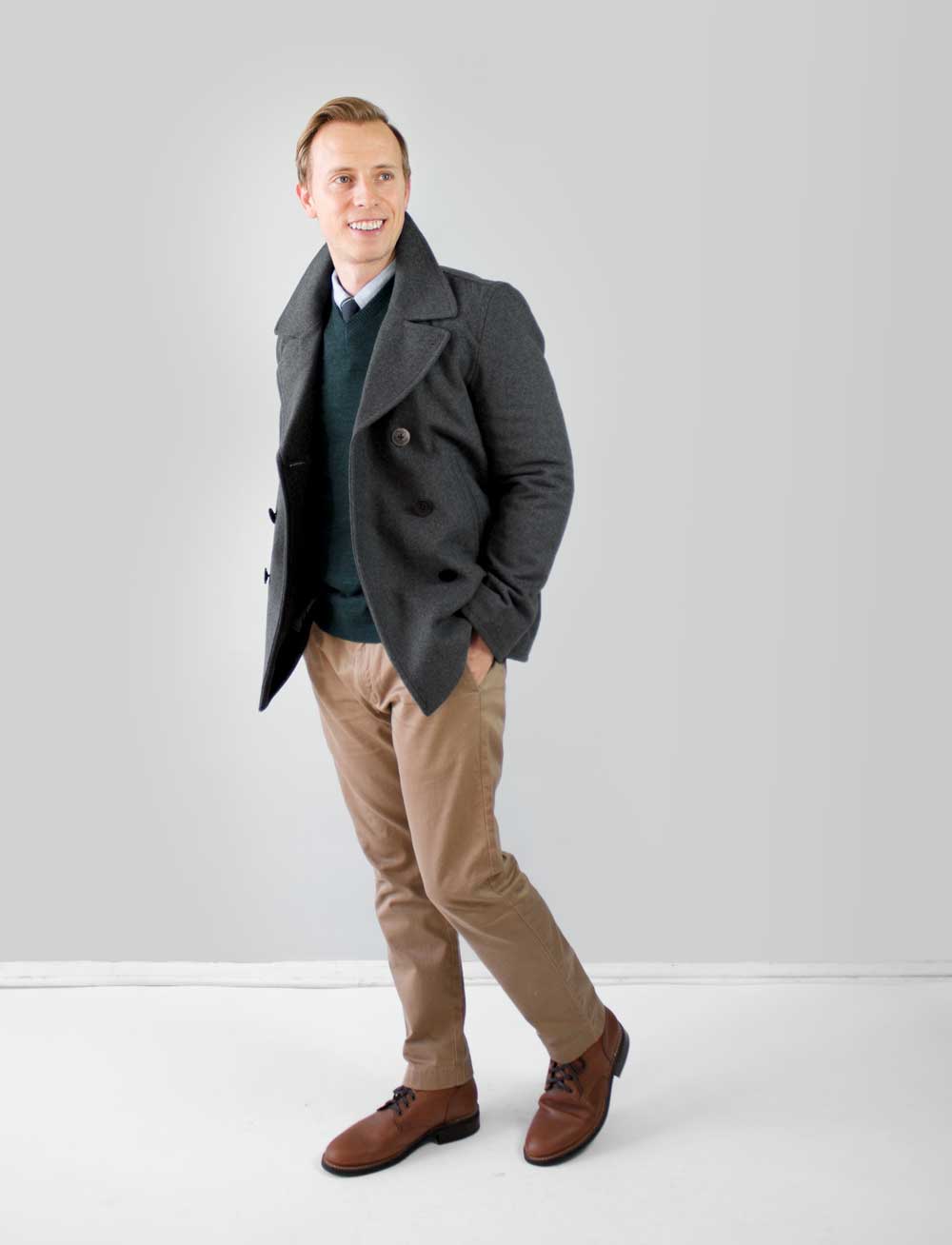 It’s a laugh at the classic cliches for men: Our culture drives people to want one thing in a boyfriend, and seek something else from a husband. The boyfriend is unrefined and sexy and confident. The husband is sophisticated, trustworthy, and generous.

The first is defined by the perception of excitement, the second by dependability.

The trouble comes when, naturally, boyfriends turn into husbands. Most people in long-term relationships actually need their partners to be a thoughtful mix of both.

And often what gives it away is our personal style. Show up to a rock concert with your partner to meet a group of friends wearing chinos and a pea coat and it’s proof that you’re embarrassingly dependable. Show up to the 40th wedding anniversary party for your spouse’s parents in a beat-up leather jacket and t-shirt, and you’re roguishly inadequate as a husband. 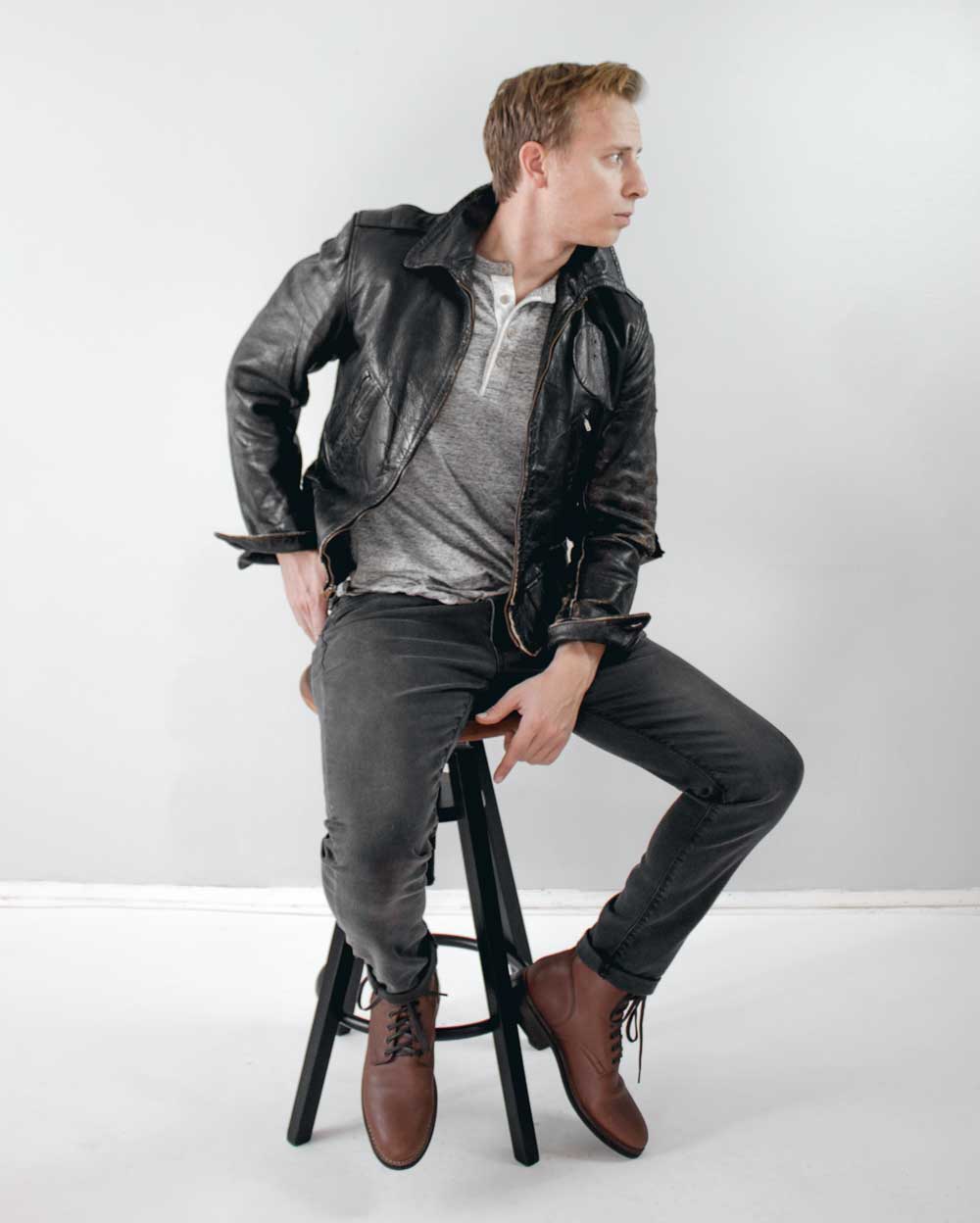 How many times have we seen the movie where the wife has grown bored and frustrated by a husband who works too much and means well but is ultimately just an agreeable guy who has grown into a boring, middle-aged man?

Equally present in movies is the raffishly attractive but immature grown man still living as a bachelor – grossing out his dates with his filthy apartment, with a refusal to take financial responsibility in his life.

In both of those predictable plot lines, the guy realizes he’s become too set in his own ways. The “Steve Carell” throws away his pleated khakis and promises new passion in a fading relationship. The “Matthew McConaughey” outgrows his motorcycle and promises to commit to a mature long-term love.

The irony is that what I’m basically suggesting is that no one is ever happy: People overlook the bookish nice guys in favor of the rugged bad boy but are constantly frustrated by all of the inherent qualities of an exciting, but immature person. When they get the overly-dependable husband all they want is a guy who knows how to excite them with just a look and a proclivity for spontaneity. 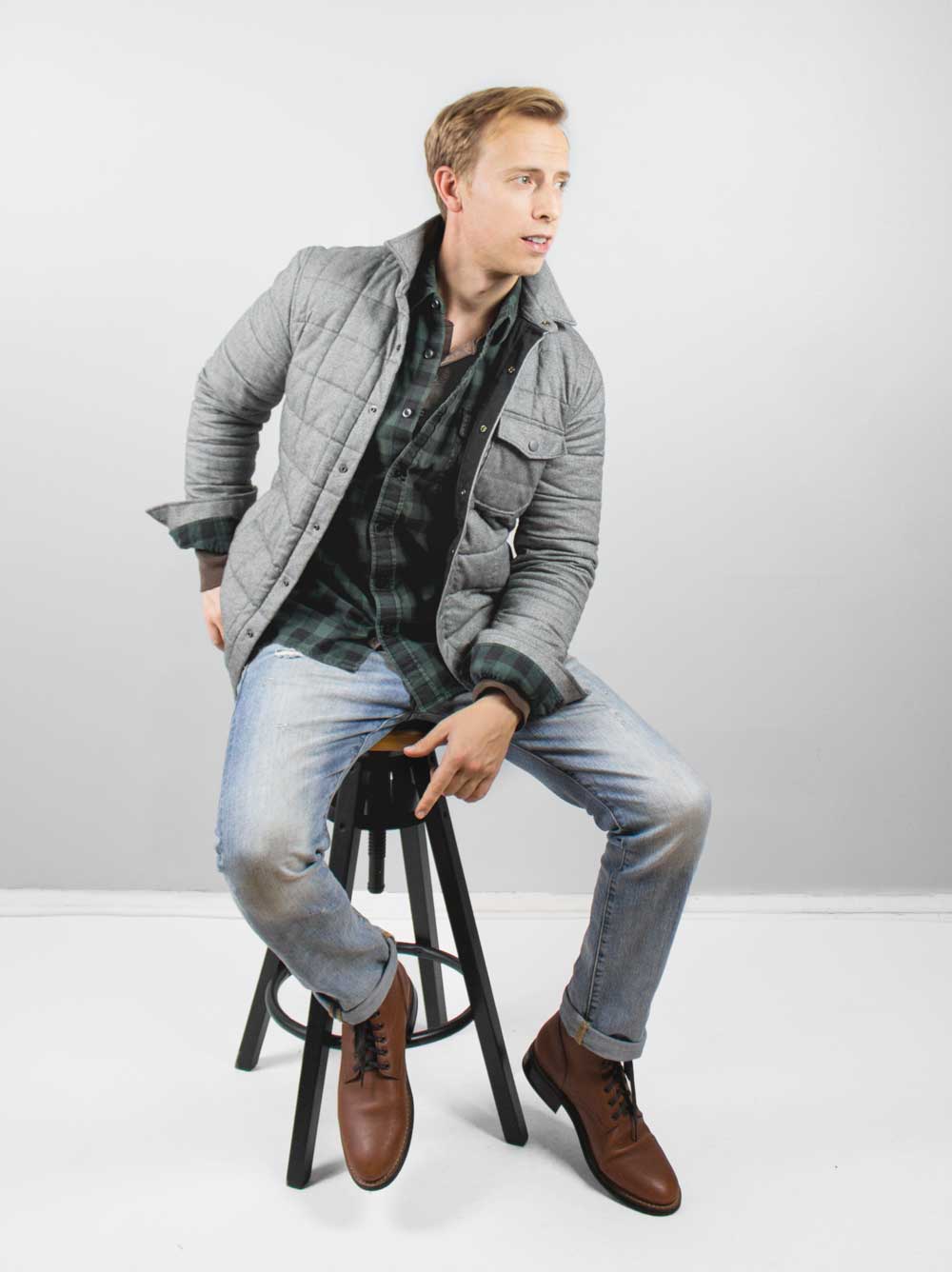 But it’s not their fault. We should all be allowed to want responsibility and excitement. For me, I want to date a woman who is thoughtful and nurturing, but who is also tough, assertive and sexually expressive within a committed relationship.

And as partners, it’s our obligation to be conscious and present enough to not get stuck in a rut. Strive to be the fun, sexy “boyfriend” who is also responsible and respectful. Endeavor to be the providing and steadfast “husband” who still likes to have fun and mix things up while making his partner feel like the only person that matters in a crowded room. 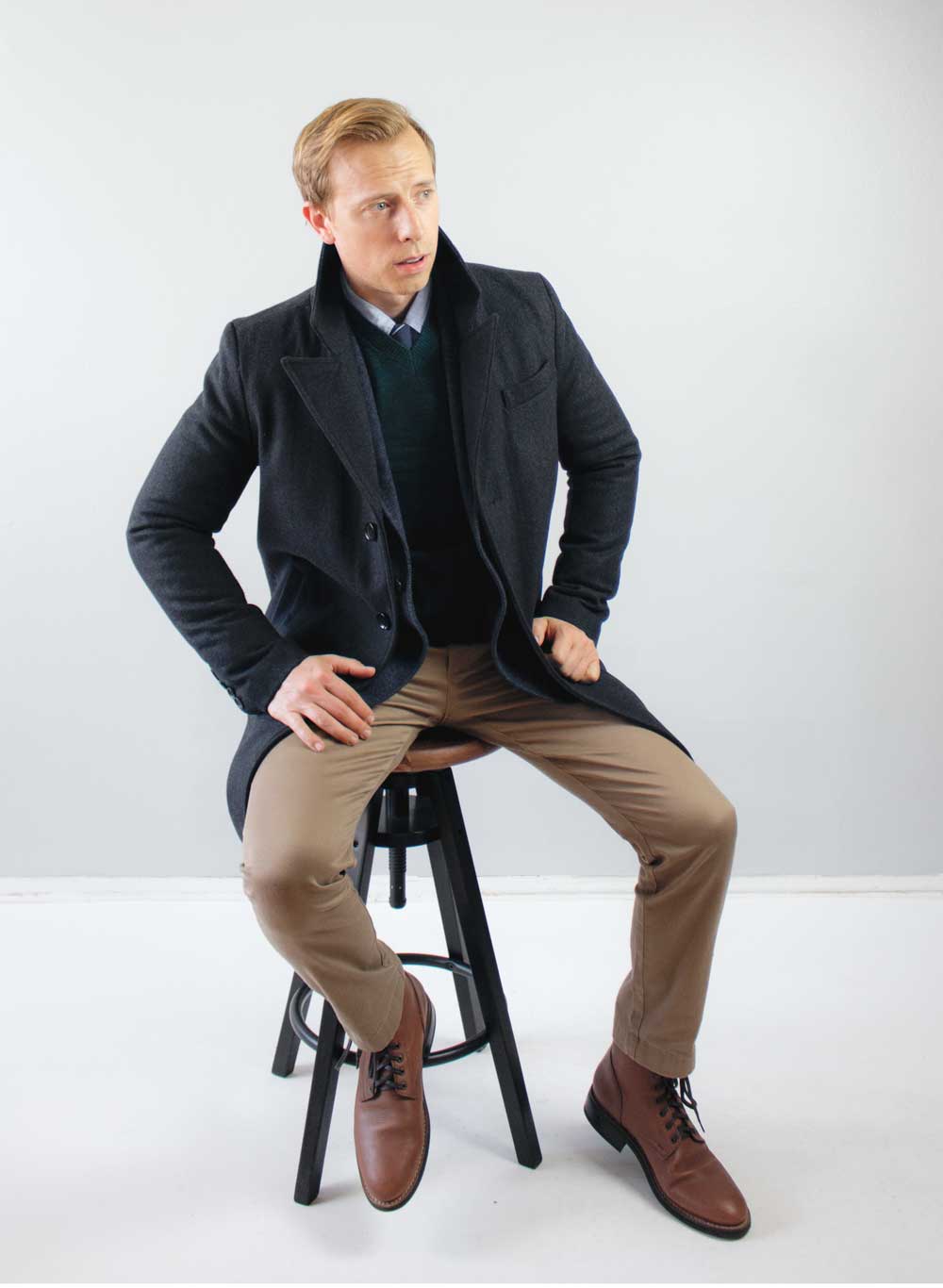 Just like the optimal guy, a great pair of boots is rakish and cultured. Sexy and dependable. That’s why these service boots from Thursday Boots work so well across style aesthetics. Much like how I’ve talked about using chameleon items to blend dress levels, a great pair of boots like the Presidents in grizzly wheat span style archetypes. Wear them with slim dark jeans and a leather jacket and they look badass. Wear them with a v-neck sweater, a tie, and khakis and they’re handsomely business casual.  Use them to finish off a quilted jacket, a flannel shirt, and a thermal henley and look ready to split some wood.

I’m a big fan of Thursday Boots. We’ve partnered with them on this post, but if you read Primer regularly, you’ll know I use them all the time on my own. I have four pairs now and regularly go for one of them over pairs I have that cost twice as much.

They’re made with full-grain leather (the highest quality grade available) and constructed with a  Goodyear Welt, which is considered far superior to frugal adhesive options, and present on all high-end boots. And unlike many vintage-inspired models, all of Thursday’s boots feature a full glove leather interior lining meaning not one of the four pairs needed any uncomfortable breaking in.

Which comes more naturally to you? Being the “Boyfriend” or the “Husband”?

Keep the conversation going in the comments!

Special thanks again to Thursday Boots for helping to make this post possible.

Business CasualCasual StyleHow-to'sLive Action GetupSmart CasualStyleThe Getup
Just in time for heavy winter weather, pick up new coats, jackets, and sweaters at off-season prices.
Be the talk of the town (or at least the watercooler) with one of these perfect gift swap ideas.
Bundling up doesn't end at your wrists.
Did You Miss These?
One of the hardest career decisions you'll ever make: Knowing when it's time (and having the confidence) to leave your first real job.
It's time we make a course correction.
When we don't train for the surprisingly strenuous task of controlling our own thoughts and emotions, we can't enforce any control over our attention, our reactions, and how we perceive our lives.
Bring your body and mind back into a relaxed state.
There’s no time like the present to check some names off your gift list.
Your kids need you; your phone doesn’t.
The last hurrah of the Black Friday sales weekend.
Black Friday is here. And we've put in some serious time distilling what's worth shopping and what's worth skipping.
Save on gifts and stock up on essentials.