I found this little beauty in Ted Haigh’s Vintage Spirits and Forgotten Cocktails. First chronicled in a very early cocktail book, 1917’s Recipes for Mixed Drinks by Hugo Ensslin, which Cocktail Kingdom describes as the “last major cocktail book published before Prohibition, and a true snapshot of pre-Prohibition recipes.” This, then, is a glimpse into what people were drinking just before it all fell down, and elegant watering holes were for a time replaced by speakeasies slinging bathtub gin masked by large quantities of sugary syrups and juices.

Once Prohibition lifted, the Honeymoon became a signature drink of the famed Brown Derby chain of restaurants in Los Angeles that first opened in 1926, and had a good run there. This is interesting to note, as it seems the death of Prohibition was not actually the death of the complex, nuanced cocktail. That happened later, during and after World War II, when American tastes shifted to the simple and straightforward.

That’s a bit of a shame, since the Honeymoon is delicious without being overly complex. It’s also an excuse to break out the apple brandy, a liquor that all too many Americans have never tried, even though one of the finest examples of the genre—Applejack—is a home-grown classic (for more on apple brandy, see A Gentlemen’s Guide to Brandy on this very site). You can use Applejack in your Honeymoon cocktail, and no less of an authority than Dale DeGroff, King Cocktail, used it as the base spirit for this drink in his seminal guide The Craft of the Cocktail, published in 2002. Still, I like to go with Calvados [French apple brandy]. It feels a bit more refined.

Essentially sticking to the sour formula, the Honeymoon takes things up a level by adding the herbal liqueur Benedictine, which is a favorite of mine. It adds an incredible amount of depth, really changing the character of the drink without overwhelming the other ingredients. A bottle of Benedictine is a good investment; you’ll use it mostly in quarter and half-ounce measures, which means it lasts a good long time, and will contribute to many cocktails before it’s gone.

Times change, fashions come and go. Both Hugo Ensslin and The Brown Derby are long gone, but the Honeymoon remains, as elegant and delicious as it was at the time of its invention, almost a hundred years ago. Give this one a shot! You won’t regret it.

Liquors in parentheses are what I used when I made this recipe, and are included as suggestions. I am indebted to Ted Haigh, mentioned above, for much of the history found in this article. 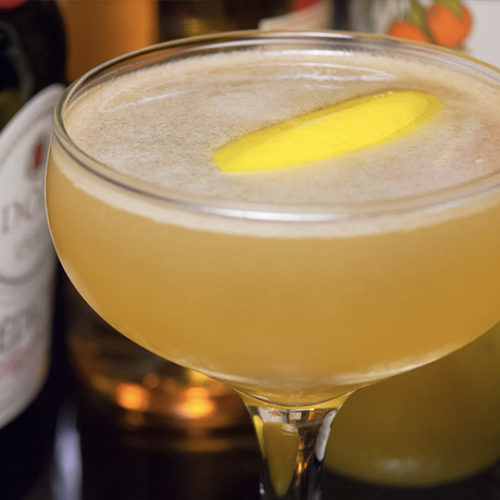 Cocktails & AlcoholIt’s Friday…Have a Drink
Discipline is a skill anyone can learn.
Cutting through the confusion: A breakdown of common knife terminology.
You don't have to be a traumatized father fighting a fungi-based zombie apocalypse to wear this jacket.
Did You Miss These?
Learn from our mistakes: Dress your best by ridding your style of these 10 common errors.
Simplify your life and have better style.
If your nipples are permanently set to “stun”, read on.
We've researched the best men's winter coats, based on material composition, product rating, and price.
Life can be overwhelming - Here's a proven method used by fighter pilots to make smart decisions fast and stay on top of it all.
And how to build them in under 30 days.
Do these now to keep your style strong and simple.
If you want to know how some rich actor gets in amazing shape, you're in the wrong place.
A look back as we gear up to move forward.