I haven’t touched very much on the subject of infusion in this series, because I’ve been busily covering cocktails you can make pretty much with what comes off the shelf. In truth, nearly every recipe I’ve ever published uses infusions, as that’s how you make bitters (not to mention most liqueurs), but today I’d specifically like to talk about all of the possibilities that are opened up by taking your favorite booze and soaking a bunch of stuff in it right in your own home!

Infusions seem to make people nervous. There are questions about when/if things will go bad, how long to infuse for, and what equipment to use. Fortunately, all of those questions are easily answered, so let’s start with the first: if you’re infusing alcohol at 40% (80 proof) or higher, which means all base liquors, then your infusion isn’t ever going to go bad – infusions made in the 18th century are still very much drinkable today. If you’re using a lower-ABV liqueur, or something like vermouth, then you’ll want to store it in the fridge and keep it for no more than a month or two.

Let’s tackle equipment next. I’ve done infusions in old liquor bottles (washed first), but mason jars are the cheapest, best way to do things. They come in a variety of sizes, they’re cheap, and the wide mouth means no time spent trying to remove chunks of fruit or bark from the neck of a bottle. You’ll sometimes see recipes mention a “non-reactive” container. This is because some metals, such as copper and aluminum, can oxidize when in contact with certain liquids, adding off flavors/colors and sometimes even particles to your infusion. That’s gross. Glass is non-reactive with everything and stainless steel is non-reactive with nearly everything. Stick with those. But seriously, just drop ten bucks on some mason jars, and you’ll be infusing with the best of ‘em.

Length of infusion varies by ingredient, which means you’re going to have to taste test. Personally, I can think of worse punishments than to sip a bit of infusing liquor every so often. Things like tea and chili peppers infuse rapidly, sometimes in a matter of minutes (see below), while fruit and barks like cinnamon tend to take a day or two to really give their all. Heat can also help speed up the infusion, but keep in mind you’ll want a very low heat (don’t get anywhere near boiling), and that it is a certified bad idea to heat 30%-ABV-or-above alcohol over an open flame, unless you like losing your eyebrows and possibly your kitchen.

Remember also that the internet is your friend, here: if you’re thinking of infusing something, chances are someone else has already done so, and blogged about their experience. They’ll probably have tips for how long to infuse, and how much of an ingredient to use.

The easiest thing to start with also happens to be one of the world’s oldest and most popular infusion ingredients: tea. It’s inexpensive, comes in a wide variety of flavors, is available in pretty much any grocery store, and  the cheaper stuff even comes in handy bags that act as their own filter. If you’re using bags, just drop them in. If you’re using loose-leaf, well, just drop that in too, but then when the infusion is finished, line a strainer with cheesecloth and strain through that, into a funnel, and into your storage vessel. What to use for storage? Well, mason jars work fine, but I really like these 375 ml bottles from Tuthilltown, which are inexpensive and allow you to store half a regular bottle’s worth of infused booze (that way you can compare the original stuff against your infusion).

Have I piqued your interest in infusions? If so, I strongly encourage you to give them a shot! Why buy a bottle of cheap, artificially-flavored lemon vodka when you can soak regular vodka in lemon slices for a day or two (or, even better, go for lemon, lime, and orange slices, and get something so much more interesting and nuanced!)? Why drink a regular margarita when you can make one with a splash of smoky, spicy, habañero-infused mezcal? What would a Vieux Carré taste like if the rye was infused with cinnamon and cloves? The sky’s the limit!

Now for the recipe. I recently infused half a bottle of Knob Creek 100 proof bourbon with some delicious Cream Earl Grey tea that I picked up while visiting Washington DC with my wife. I used 1 tablespoon of tea to 350 ml of bourbon, and did the infusion at room temperature. The process took only 40 minutes; I shook the bottle every ten minutes, and started tasting after 20. The result is excellent, the bourbon pleasantly tinged with earl grey flavor without being overwhelmed by it. I used it to create an original cocktail that I call the Kentucky Earl, and which I heartily recommend. 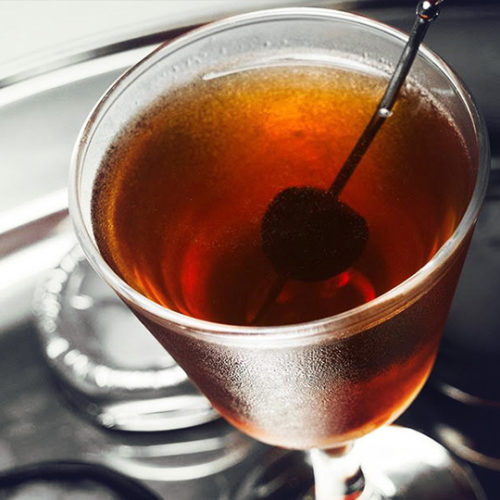 Cocktails & AlcoholHow-to'sIt’s Friday…Have a Drink
Discipline is a skill anyone can learn.
Cutting through the confusion: A breakdown of common knife terminology.
You don't have to be a traumatized father fighting a fungi-based zombie apocalypse to wear this jacket.
Did You Miss These?
A step-by-step guide for making, achieving, and tracking better goals, plus 50 examples to get you going.
Save money, time, and eat healthier. It tastes pretty darn good too.
As a Primer reader you already know the importance of controlling the image that you convey to the world. How you dress, how you...
We've researched the best men's winter coats, based on material composition, product rating, and price.
Life can be overwhelming - Here's a proven method used by fighter pilots to make smart decisions fast and stay on top of it all.
And how to build them in under 30 days.
Do these now to keep your style strong and simple.
If you want to know how some rich actor gets in amazing shape, you're in the wrong place.
A look back as we gear up to move forward.