sidebar_content
Skip to Main Navigation Skip to Content
It's time to create a bedroom that feels like home.
8 September,2022By Lindsey Silva
This post may contain affiliate links, read about our editorial promise

You’ve landed your dream job, and you’re excited to upgrade and personalize your own space. Everything is going well: You’ve got a cool mid-century modern vibe going on, hung some interesting artwork on the walls, tucked a few houseplants here and there — you even bought a rug for the living room.

However, most guys are stuck when it comes to decorating their bedrooms, especially the bed itself. Many will settle for a boring, 100% polyester bedspread in black, with cheap black sheets and pillowcases to match, making their bed look like a black hole instead of the main star in their bedroom.

Ready to update your bedding situation? Check out these classic, stylish and affordable options we curated specifically for modern men.

But first, let’s talk about duvet covers and blankets.

What is the difference between a duvet, comforter, bedspread, and blanket?

Not to be confused with duvets, duvet covers are the decorative fabric sheath that encases the duvet. The duvet itself is the puffy white thing.

Think of it this way: The duvet is the “pillow,” and the duvet cover is the “pillow case.” Traditionally, when bedding is labeled as a comforter, it is the “pillow” with the color or pattern sewn onto it – so to wash it, you would have to take the whole thing to a dry cleaner.

Duvet covers are great, because they’re much easier to wash than a bedspread. Simply take the duvet cover off the duvet and throw it into the washing machine, same as you would for sheets. If you want low-effort bedding, a duvet with a duvet cover is the way to go.

Unlike a comforter or duvet, a bedspread generally does not have any stuffing; it’s more like a blanket. Another way to jazz up your bedding is by using two complementary blankets or quilts, overlaid on top of each other. For example, a high-quality plain blanket overlaid with a blanket in a classic print. This is also an easy-care option. And for the warmer months, the top layer can be removed.

Which option you choose should be based on sleeping preferences and how much temperatures where you live swing throughout the year. If you have cold winters and hot summers, it may make more sense to combine a mid-weight duvet with a blanket so you can reduce a layer when it gets hot. 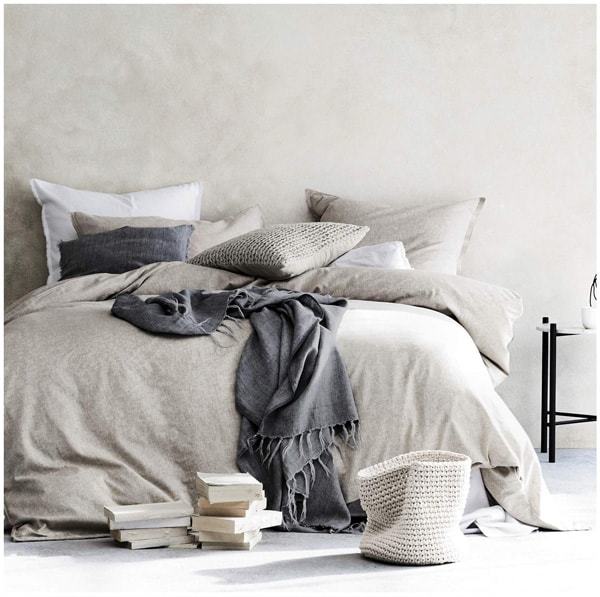 General rule: If you prefer a duvet cover in a solid color, always opt for fabric that has an interesting, textured look. This otherwise plain gray duvet has a soft, stonewashed appearance, which instantly gives it more visual appeal. (Consider how mundane this light gray cotton duvet cover is, in comparison.) 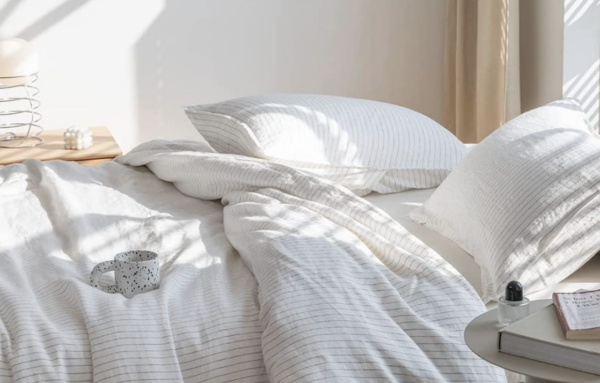 A classic stripe pattern pairs well with the textured look of flax. This pattern and texture is extremely versatile, and would work equally well in a man’s bedroom with an industrial, mid-century modern, or modern farmhouse theme.

Trying to decorate your home on a budget in a style you can actually be proud of? You have to read our full guide to the 18 best stores for affordable home decor. 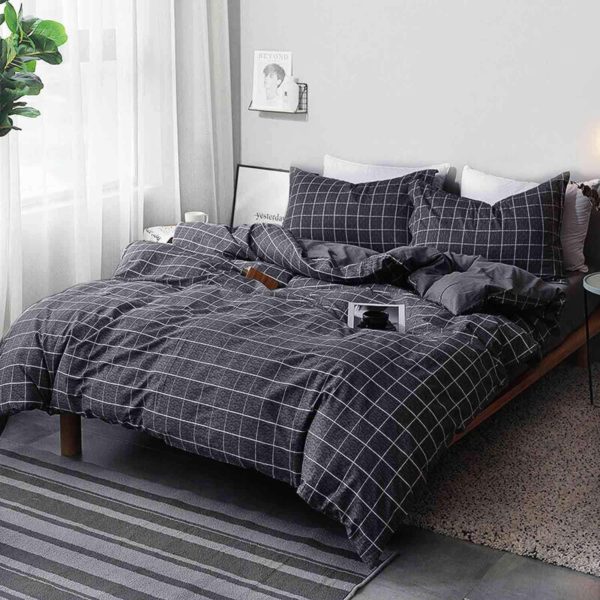 Looking for a bolder pattern? Try this duvet cover with matching shams. Place a white lumbar pillow with black or navy stripes (like this) in front of the two decorative pillows to break up the repeating dot pattern. 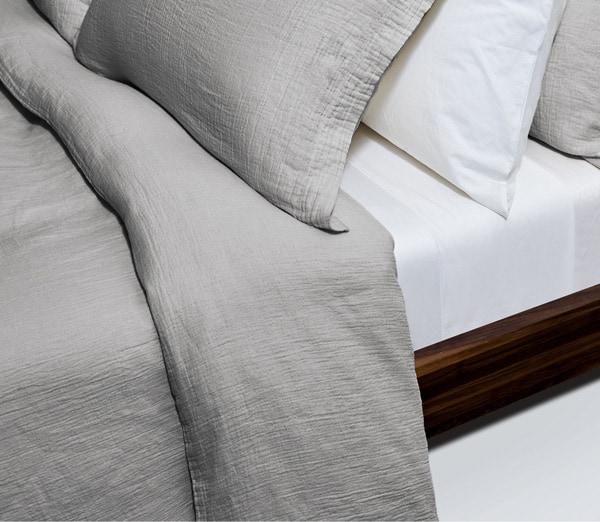 A higher-end alternative to the Eikei duvet cover previously listed, this contemporary, textured duvet cover is the perfect option if you’re searching for a darker gray color. 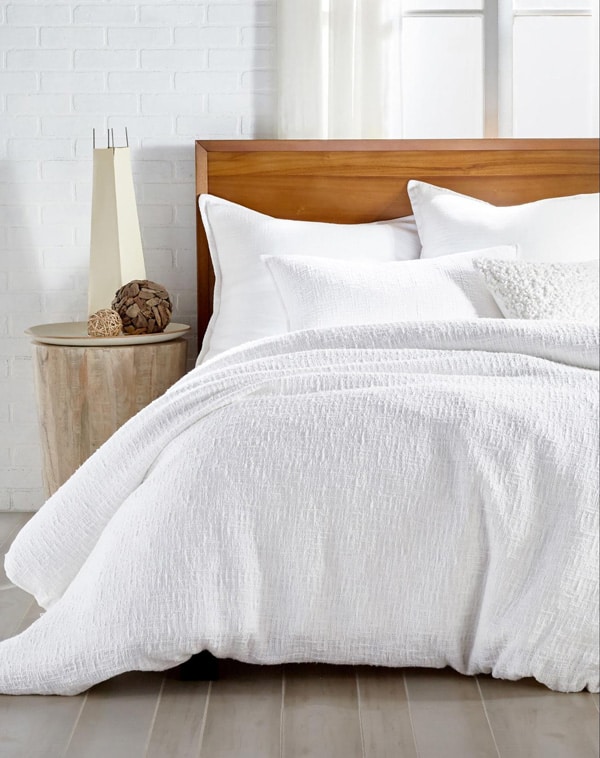 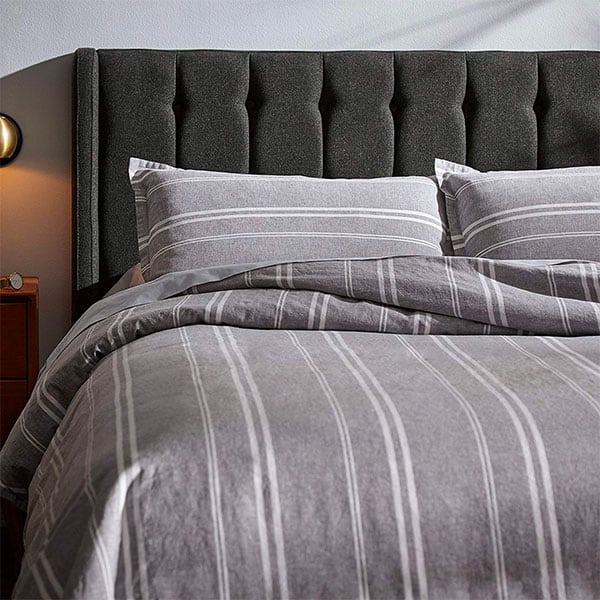 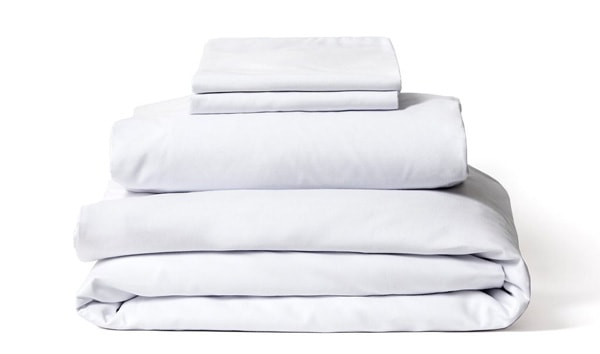 A50 Duvet Sets in White

Made of highly-breathable Supima cotton and created by American-owned cotton growers, millers, and weavers, A50 duvet sets ship free within the US. 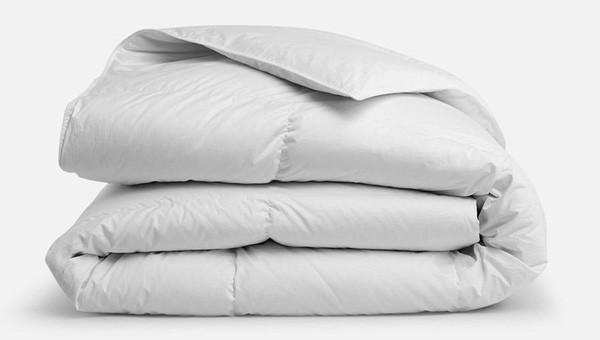 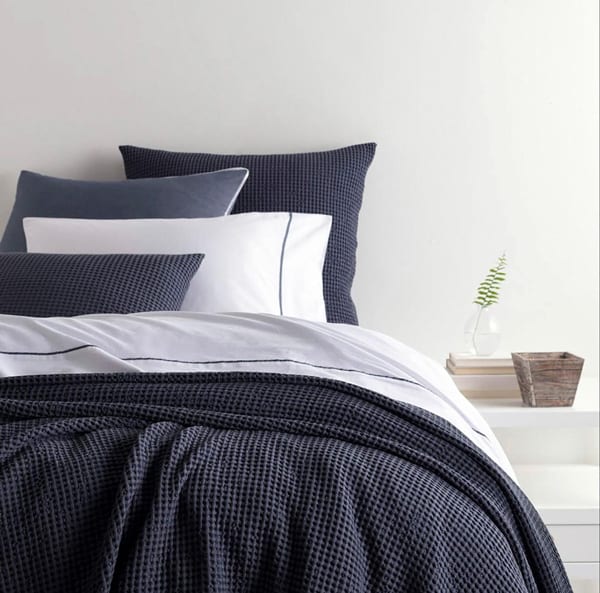 Remember the rule about texture? You can still use otherwise “boring” dark colors, like navy blue or black, for your bedding, provided that the bedding has an interesting texture. The sumptuous waffle weave on this navy blue coverlet is perfect for creating texture and pockets of light and shadow, and when paired with crisp white sheets, your bed will look sophisticated and polished, not boring and plain. 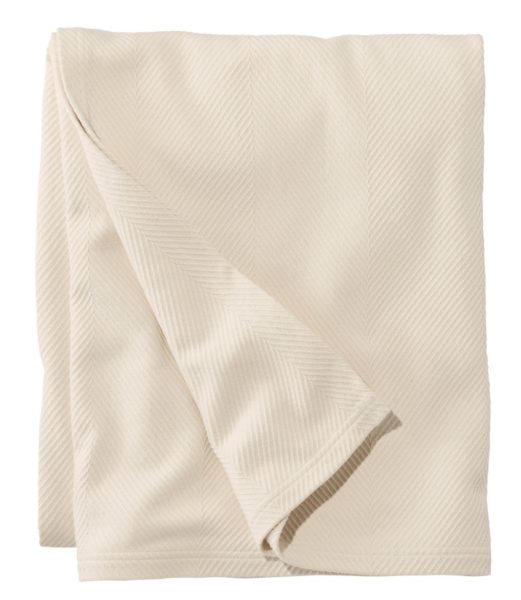 Handcrafted in Maine, this heirloom-quality blanket is made with 100% cotton and is machine washable. 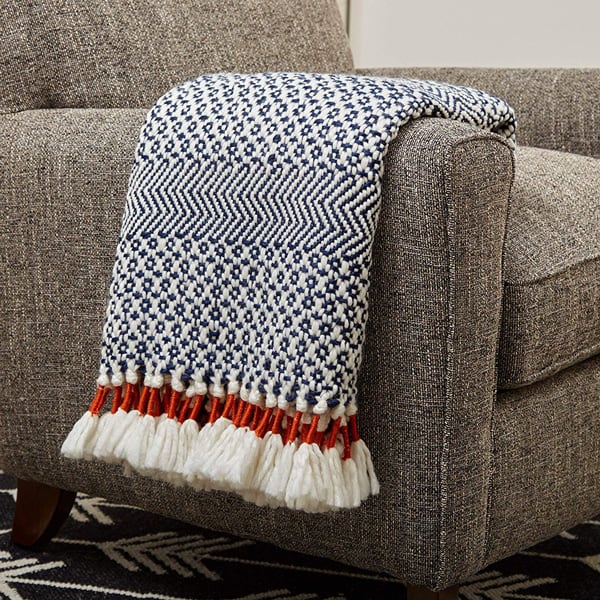 The sienna color around the cream-colored tassels is the perfect pop of color for this beautiful throw, and a subtle (and affordable) way to make a statement. 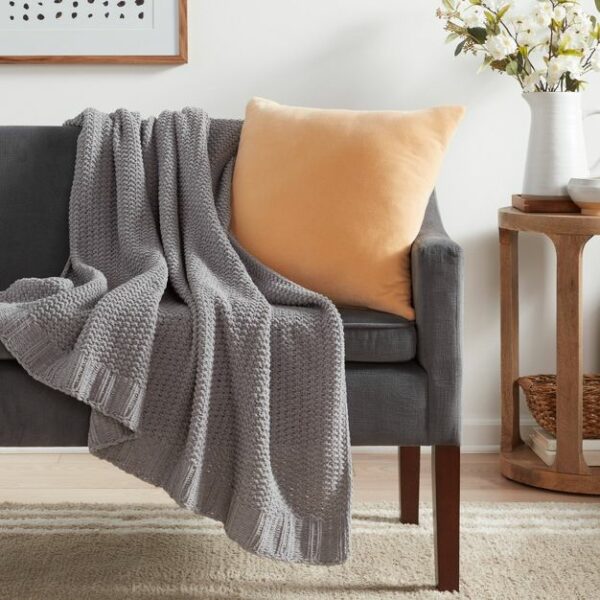 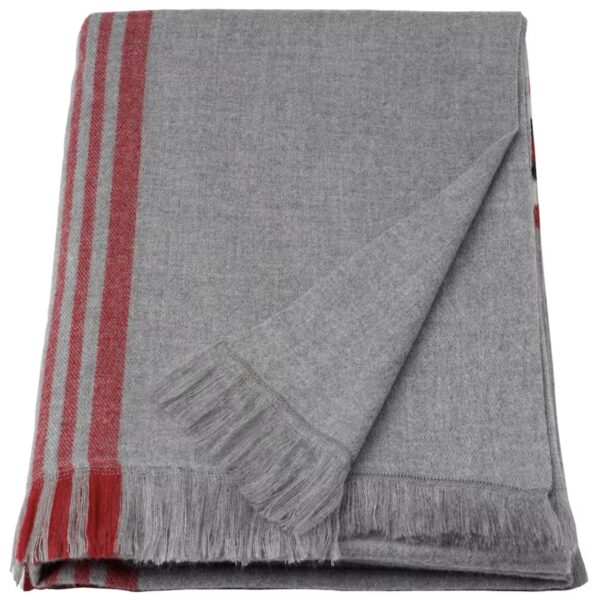 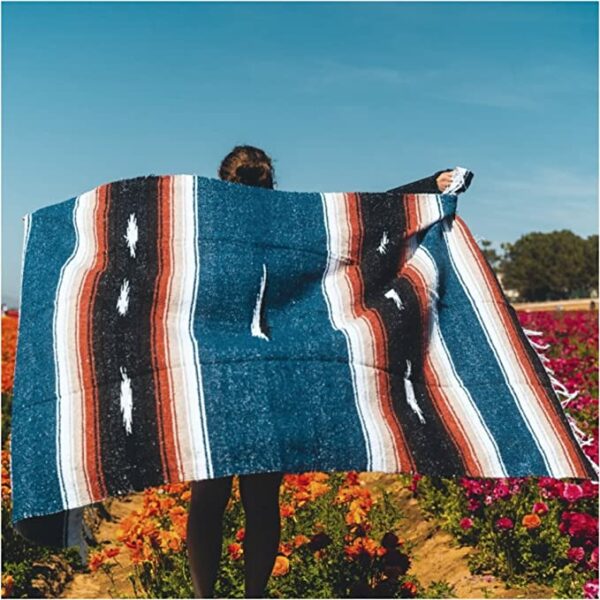 Have you recently updated your bedding, or are you searching for a new look? Share your favorite finds in the comments below!

Lindsey Silva is a native Texan currently living in Germany. She writes about home decor and real estate, and dabbles in academic editing. Her interests include Brazilian jiu-jitsu, balcony gardening, binge watching Forensic Files with her husband, and spending an unhealthy amount of time on Reddit.

Apartment LivingHome & LivingThe Intentional Apartment
Gear up for fall with this whole look that's 40% off right now.
In praise of the not-so-boring staple.
Our favorite fall boots based on quality and versatility.
Did You Miss These?
Not even Superman can do it all himself. Get to the Hall of Justice and plan your own league for life.
Saying "thank you" with a big smile when you receive a gift or nice gesture may seem adequate enough but it's not. A gentleman always writes a thank you note. In these days of instant communication, ... [more]
Your next favorite pair of jeans.
Look to the stars for some budget-friendly wall decor inspiration.
How it looks will always just be PR.
It'll be a wale of a good time.
They work whether you’re a perfectionist, unmotivated, find excuses, or get easily distracted.
Fixes for the everyday annoyances of trying to dress well.
If style makes the man, lighting makes the room.