High Tops vs Low Tops: How Any Guy Can Style High Tops and How They Alter an Outfit + 5 Looks, 2 Ways 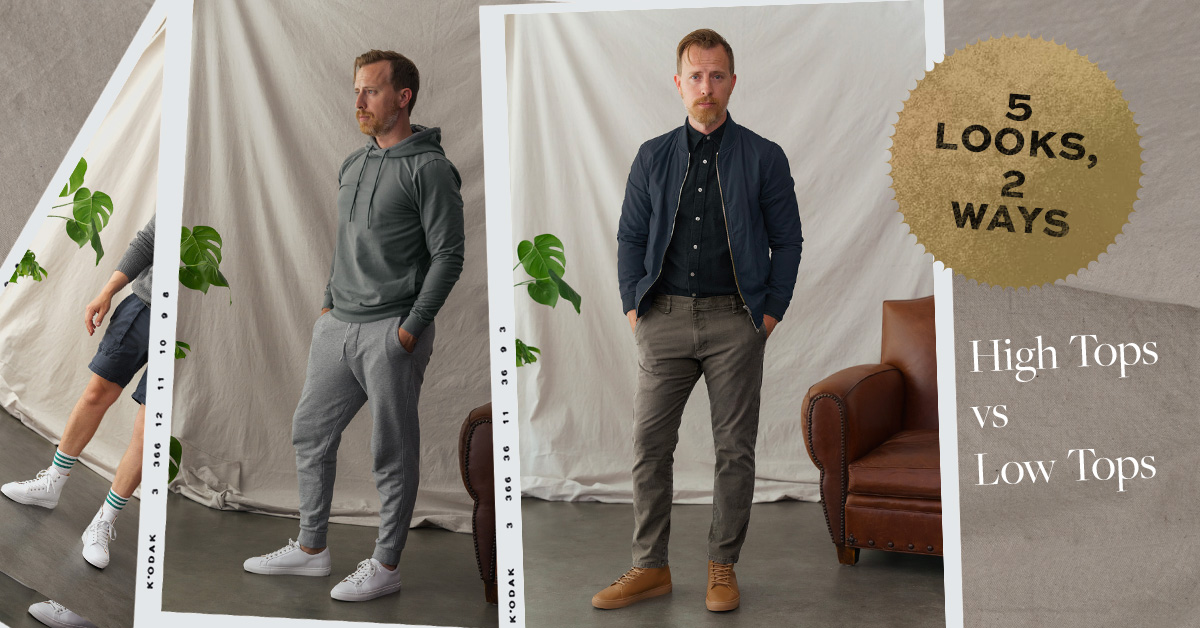 Add a new option to your rotation.
Words & Photos by Andrew Snavely

Special thanks to Thursday Boots for supporting Primer’s mission and partnering with us on this post.

If you’re a man of a certain age it’s safe to guess you have some strong biases against high tops. “High tops are for kids” or “high tops are too sporty” or “it looks cool on other guys but I can’t pull it off.” All of which, I think you’ll see, are pretty silly once you think about it.

It’s not so much that these kinds of anti-high top ideas are wrong as much as they are outdated and no longer relevant. And not in the “style trends come and go” kind of way, though that certainly always has a say in things.

But more so, when we were younger these things were true because there wasn’t an alternative. If you wanted a high top in the 90s there were essentially two options: canvas Chuck Taylors or thick, padded basketball high tops. The former were part of the uniform of the likes of Mister Screech Powers; an undesirable style icon to emulate. And the latter were comfortable and we beat them into the dirt but we all got to a point where the message was loud and clear: Boys wear high top sneakers. Men do not.

Of all the push-pull fashion trend changes of the last 15 years, few things have changed so dramatically than the normalization of sneakers as everyday footwear for men.

I guarantee in 99% of non-creative offices pre-2005 men wouldn’t be wearing sneakers as a part of their daily style. Hell, Casual Fridays were a common thing and you’d still have to wear nice shoes with your dressed down outfit. But now, not only are sneakers an acceptable part of the uniform in places they weren’t before, the CEO might be wearing them too.

This can be attributed to two changes – the ever casualization of clothing, of course, and the introduction of a new class of sneaker. The “smart casual” or “dressy” sneaker that we’ve all become accustomed to in the last few years didn’t exist. The type of clean, minimalist sneaker that looks polished with a pair of tailored chinos or dark denim or even dressier outfits was not as widespread. The release of more premium sneakers into the zeitgeist that could be worn intentionally, which cost just as much as a pair of well-made dress shoes, connected what has previously been a stark dichotomy: Athletic sneakers and appropriate shoes for the rest of life.

It’s true that the silhouettes and key design details of these sneakers were influenced heavily by long existing models like Stan Smiths, Blazers, or Chuck Taylors, all which had been sold and popular before the 1980s – 1963, 1973, and 1922 respectively. Importantly however, and something it’s easy to forget in the modern age of tech-designed athletic footwear, these shoes were created to play sports. These, and others, like the Reebok Club C in 1985, worked their way into daily life, first among kids and then the casual weekends of adults. My father certainly wore the Club C to BBQs and the movies well into the 90s, but I never saw him wear them to anything that wasn’t a strictly casual affair. 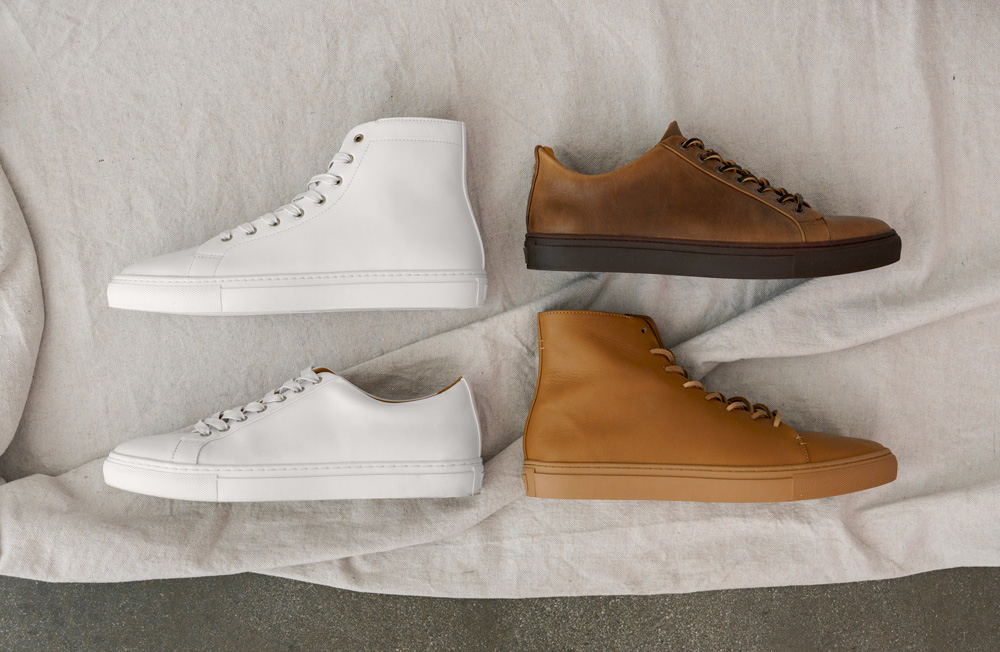 As dressier versions of low top sneakers became embraced by guys looking for a more comfortable/casual/versatile alternative to typical work or dress shoes, somehow the high top sneaker has still been held off as a bridge too far. It is somewhat ironic, or at the least inconsistent, that the high top has still yet to be generally accepted in many men’s casual-professional or smart casual wardrobes, since some of the first sneakers to ever exist were high tops and worn by adults.

The point I’m making is not that the cultural fashion gods have decreed you should replace your low top sneakers with high tops. It’s simply, sometimes, high tops are an awesome option to include or create balance within an outfit. And as far as regular style for everyday guys goes, more options are always welcome.

Below you’ll find 5 outfits showing just how sharp a pair of high tops can be. To get the full effect of what high tops can bring to an outfit, I’ll show the same outfit with low tops. Be sure to Pin them so you can reference them as outfit inspiration later.

With a Henley & Jeans 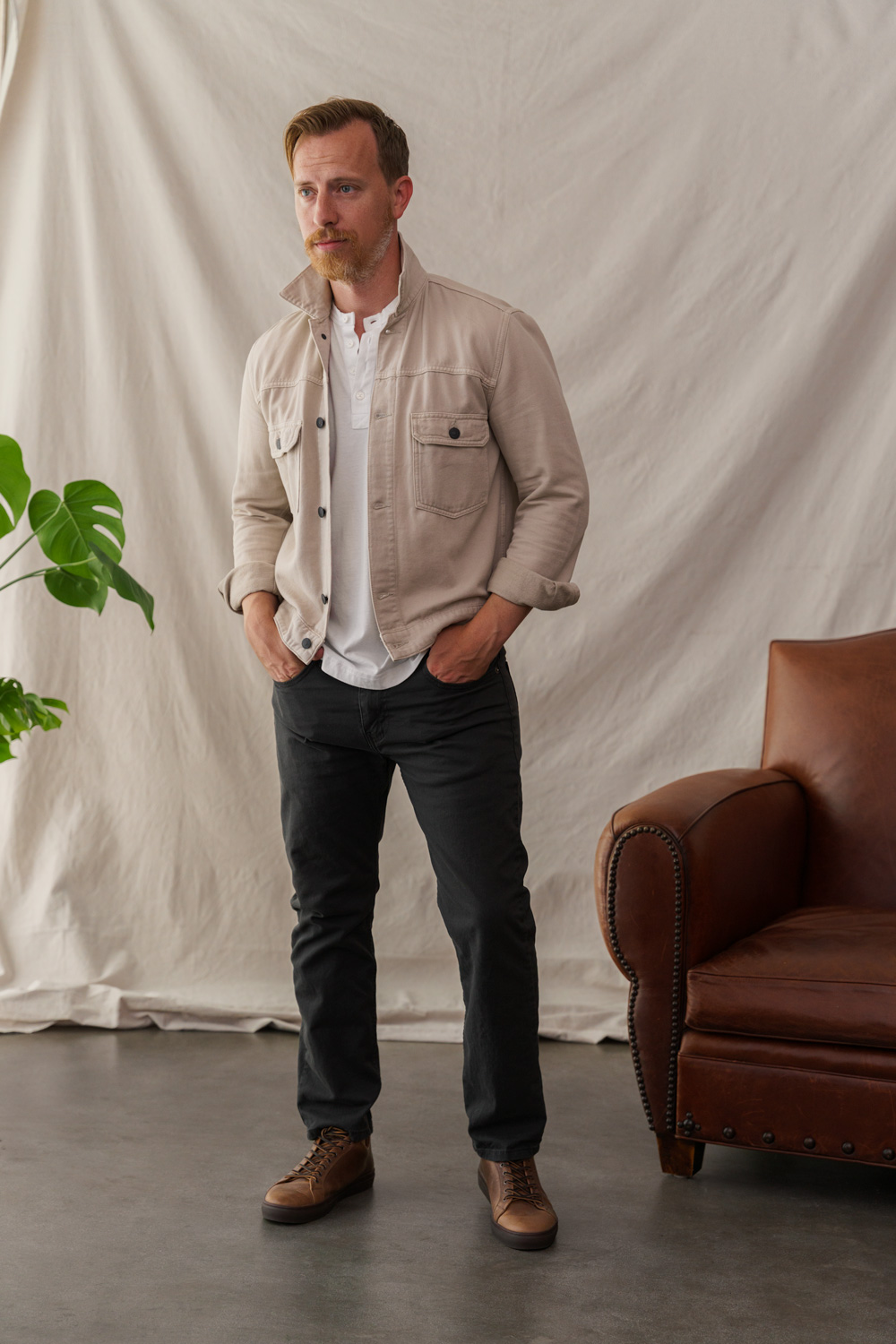 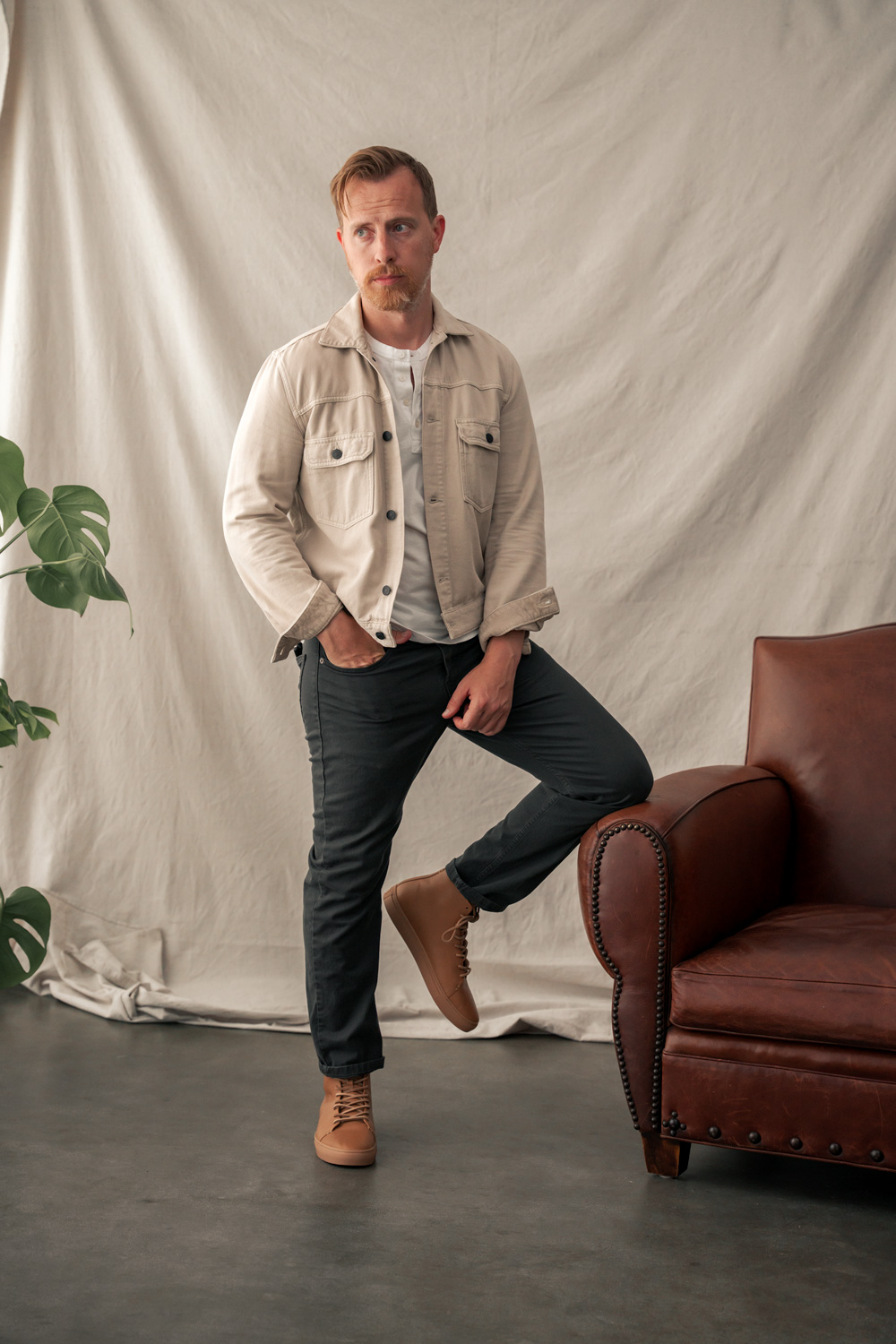 Here is an effortlessly sharp outfit that could take a man to 90% of his off-of-work destinations. High tops can contribute an air of edge, sportiness, playfulness or streetwear to an outfit which can be used to bring other items of the outfit into balance with your personal style. For example, if an outfit is skewing too rugged, too preppy, or too dressed up for your taste or where you’re going, smart casual high tops can replace a boot or low top sneaker as a counterbalance.

Smart Casual With a Bomber 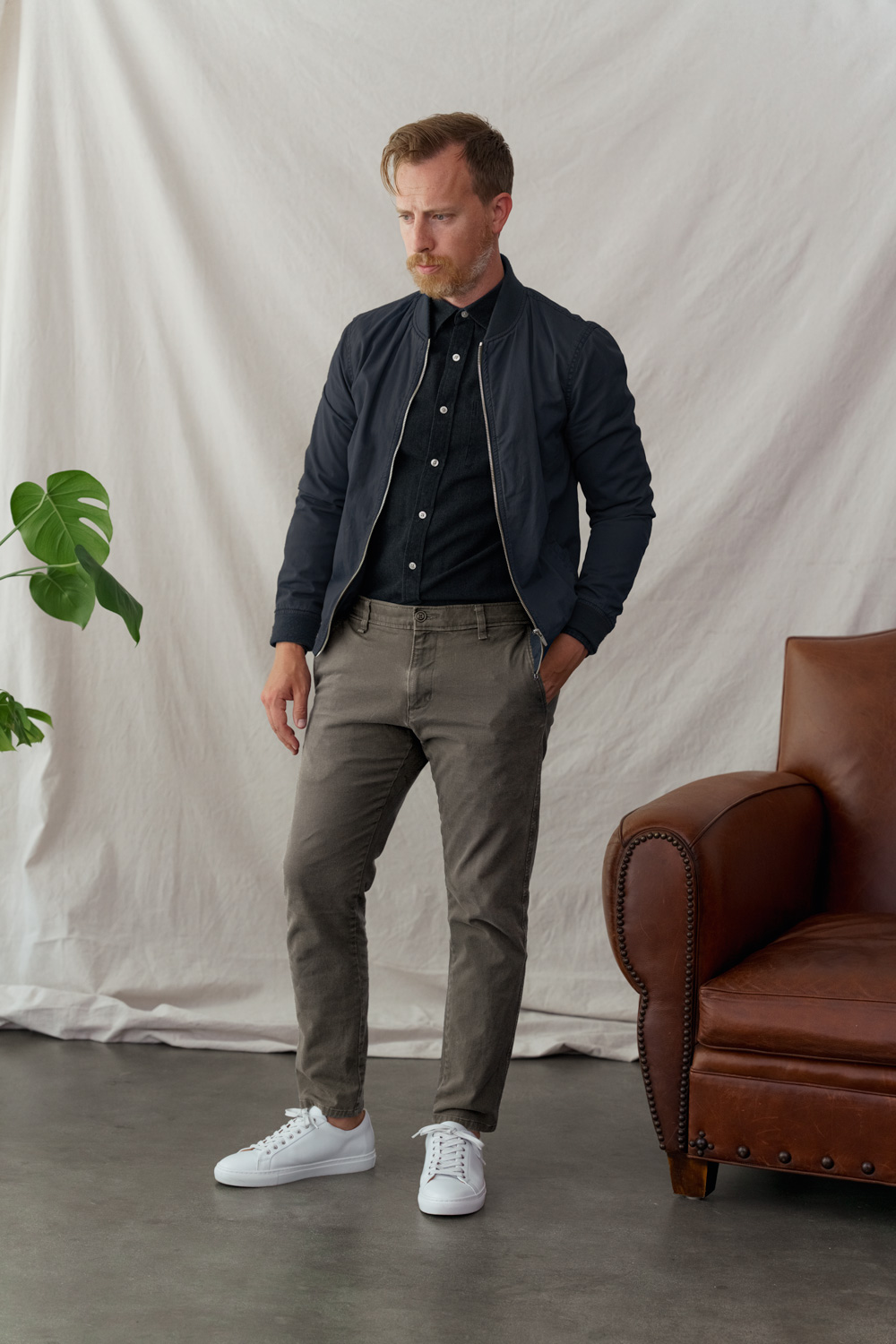 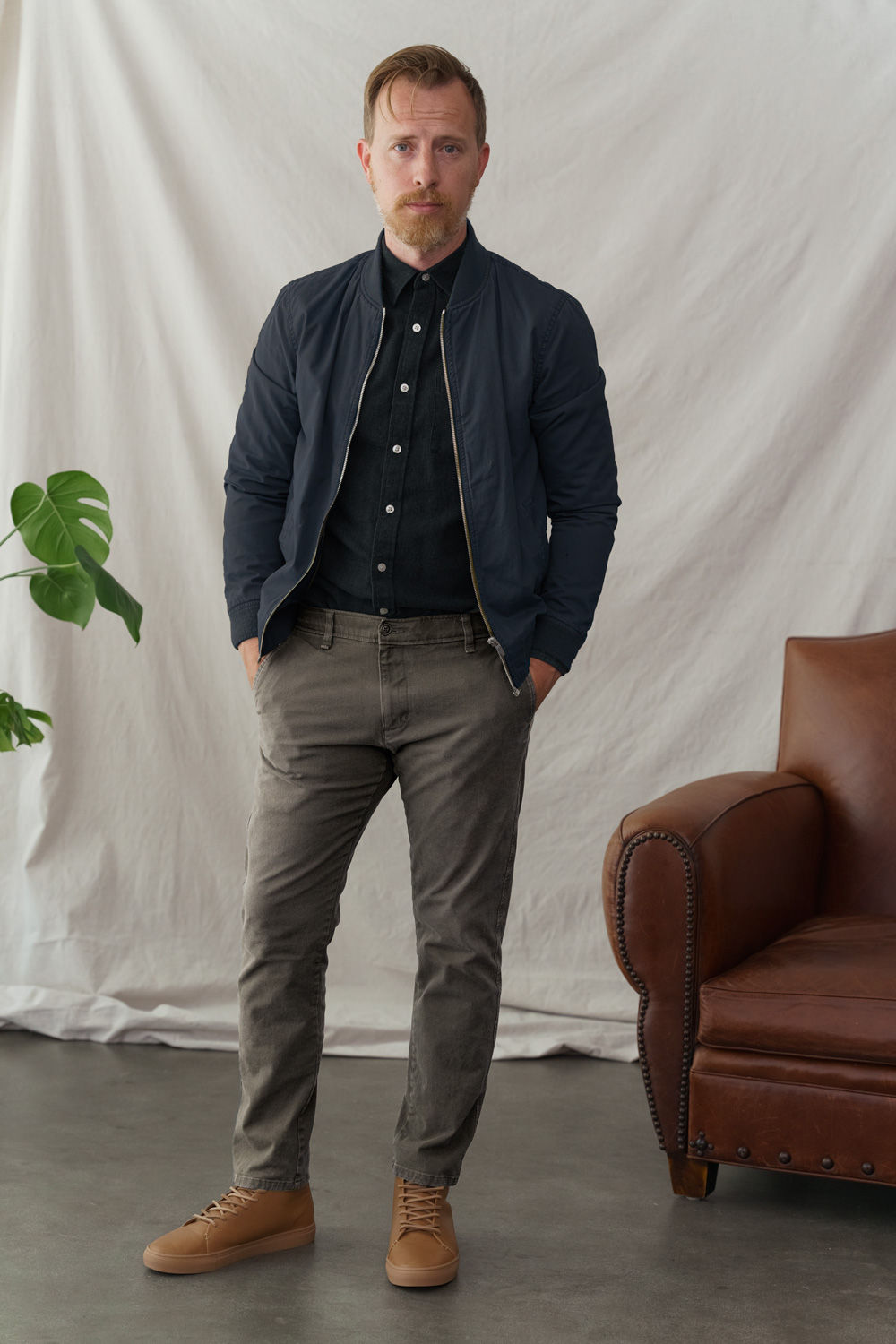 This is an outfit recreation from a famous photo of Ryan Reynolds in Rome. Pairing a bomber jacket with an “air tie” and tan suede high tops, he creates a casual but very intentional style that is pretty universal. (He wore it to film promotion events, it’s probably adequate for a date or casual networking event.)

While white low top sneakers would normally be a standard choice for me, I find the tan Thursday high tops really elevate the look. On paper it may seem weird pairing the black shirt and tan sneakers in favor of some other combination but as Mr. Reynolds has demonstrated, it works.

With a Hoodie & Joggers 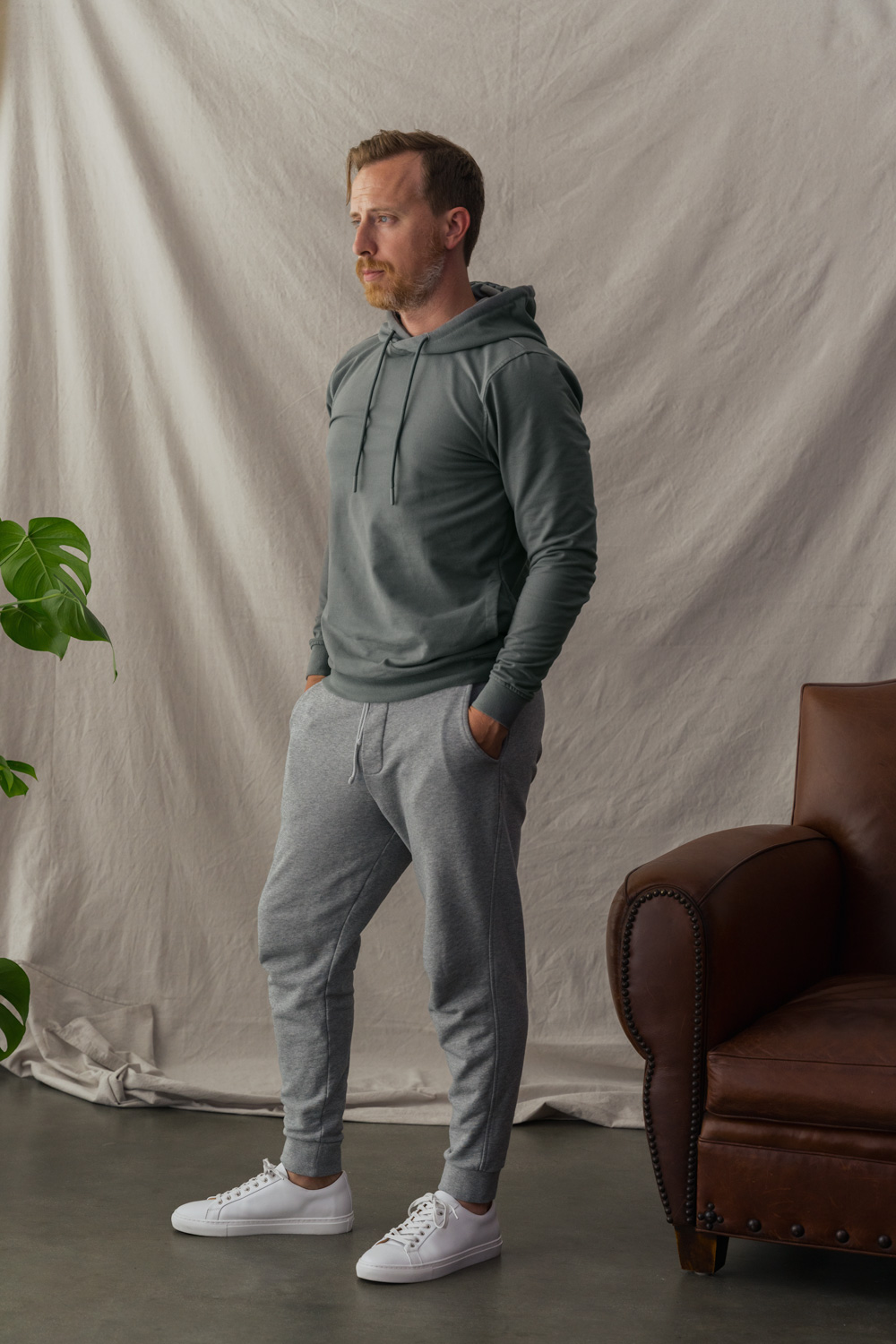 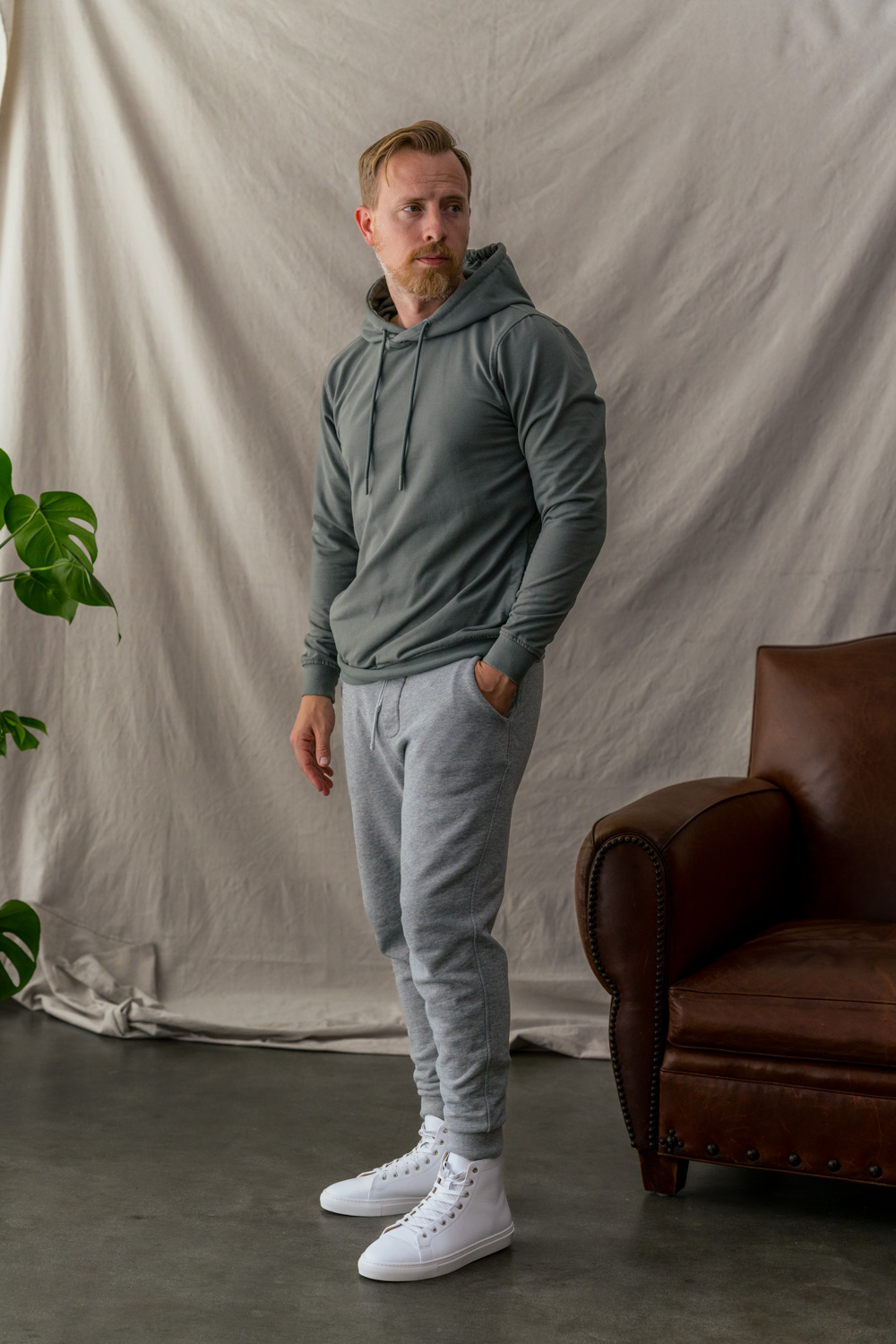 Perhaps the easiest place to slide in high tops for low tops is with more casual athleisure. While both offer a pop of white to the base, the high tops create a level of interest or dimension to an otherwise super minimalist style.

Thursday's sneakers use full grain luxe Nappa, Chromexcel, and Vachetta leathers, the latter of which is usually used in high end handbags and luggage. Featuring superior construction with a super soft interior lining, they represent the most wallet-friendly option of the premium sneaker market. A no-brainer for any regular guy trying look his best and spend smartly. 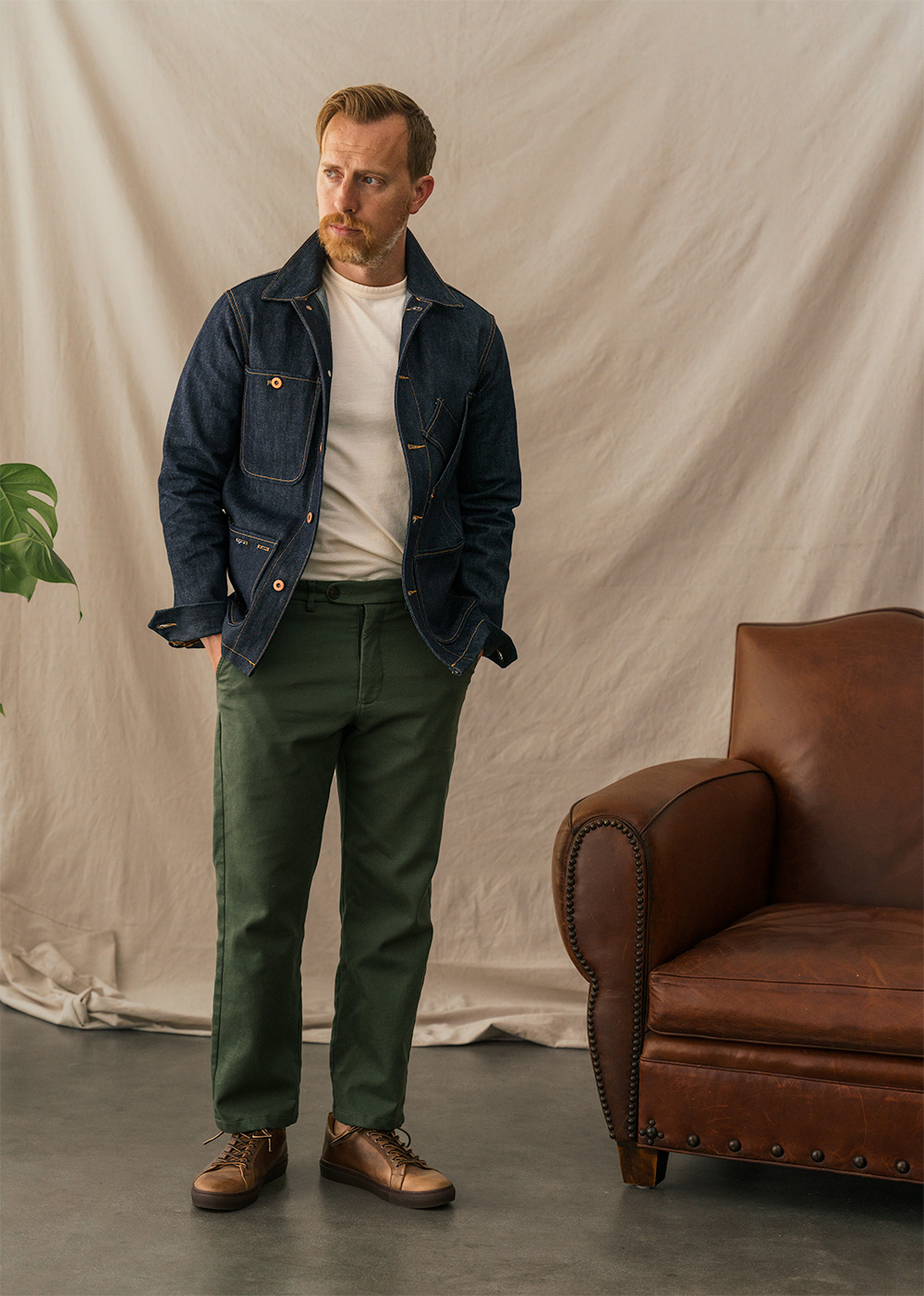 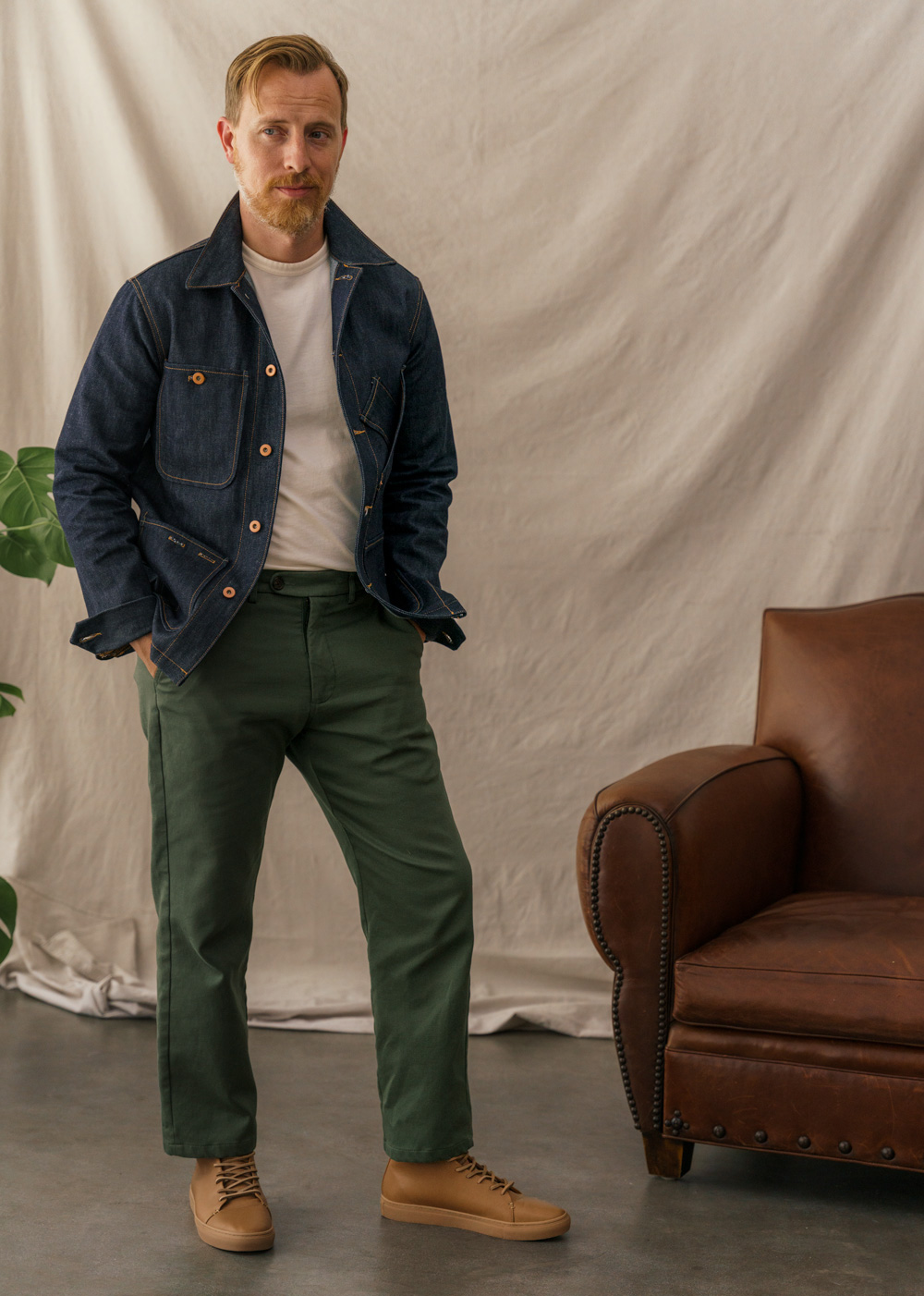 This outfit would look right at home with a pair of boots thanks to the denim chore coat over the white tee but it’s the addition of the brown sneakers that contributes a sprinkle of modernity. The high tops specifically feel a little more “playful” without reducing the dress level. In some ways, I find the high tops to better balance the t-shirt and fuller-cut chinos. High tops can add similar qualities to an outfit as a boot or chukka thanks to the comparable silhouette.

With a Knit Hoodie & Shorts 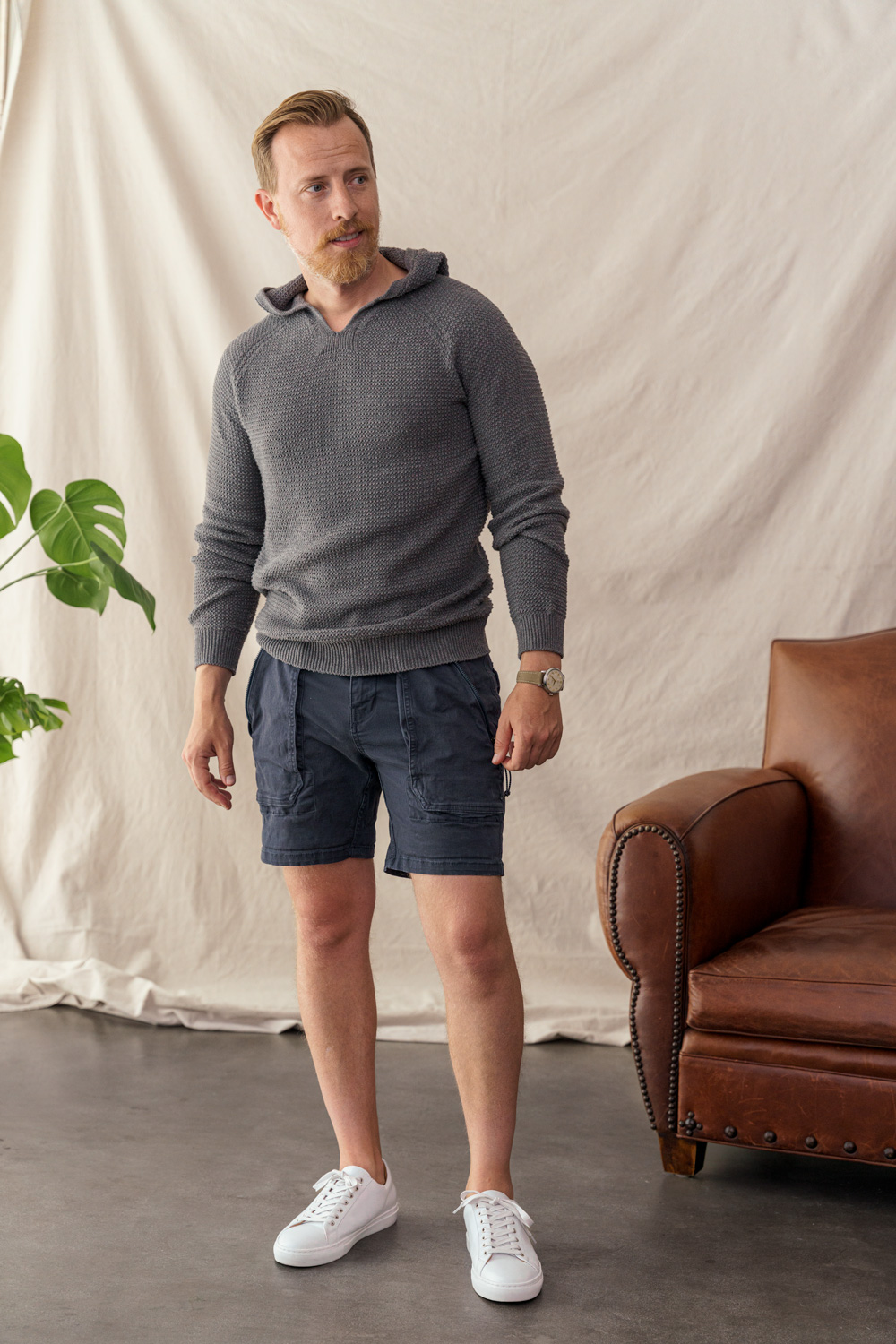 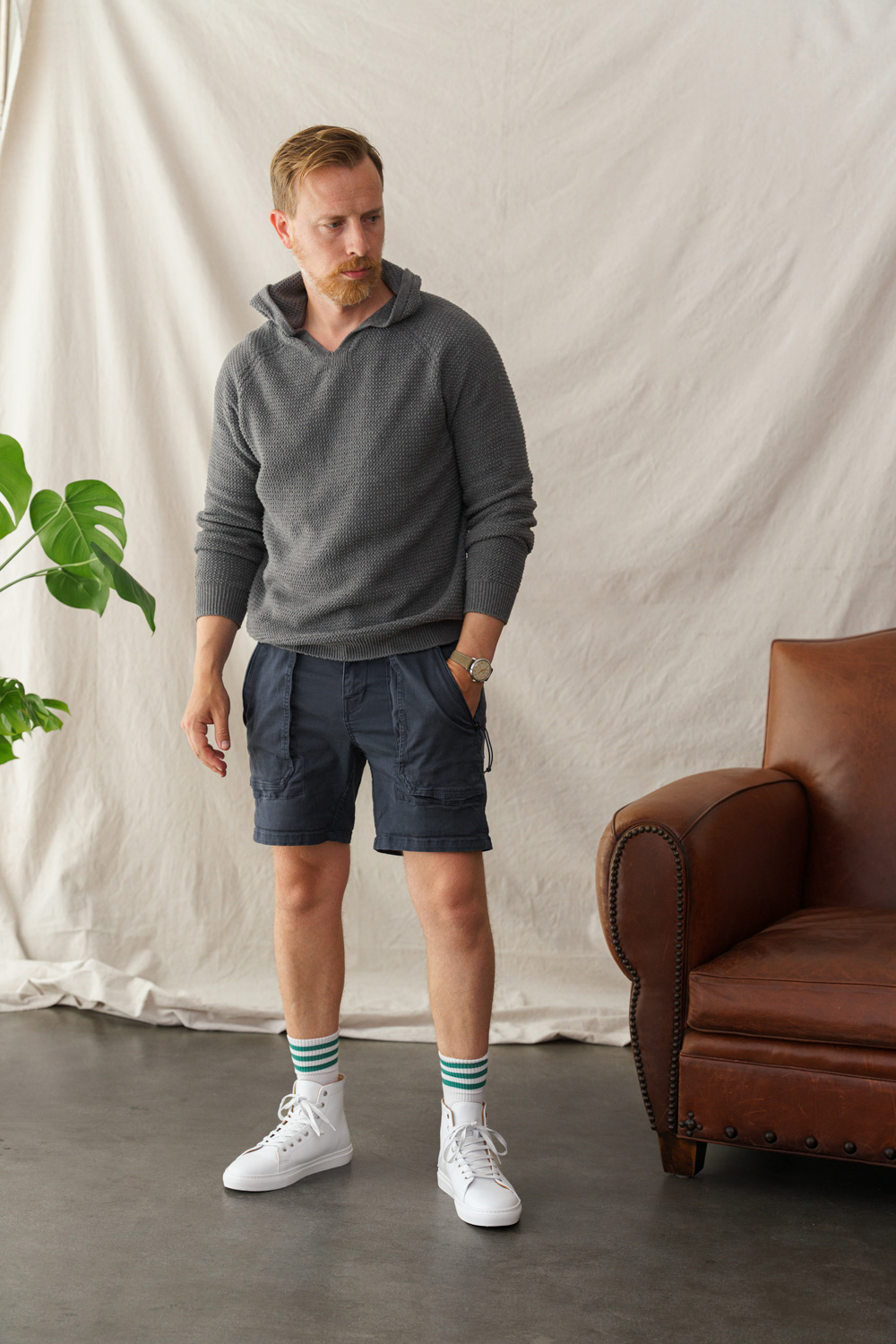 There’s something wonderfully vintage about a pair of high tops with shorts and striped socks that is also clearly contemporary. Style details in the drapey knit hoodie and the outside seamed pockets on the utility shorts supply visual texture to an otherwise very straightforward outfit. Unlike with low tops, where the aesthetic preference for a smart casual sneaker is a low or no-show sock, high tops beg for a little sock, even if it’s just peeking out of the top. So if you’re a guy who has never liked the sockless look, you may just love the option high tops offer.

Thanks again to Thursday Boots for supporting Primer’s mission and partnering with us on this post!

Casual StyleSmart CasualStyleThe Getup
Lighten up your winter wardrobe.
Getting the perfect fit right off the rack is like winning the lottery. Whether you wear suits or selvedge denim, this guide demystifies the process of tailoring and alterations.
Discipline is a skill anyone can learn.
Did You Miss These?
Carolina or St. Louis? Brisket or Pork shoulder? This summer, navigate the maze of sauce styles, meat cuts, and cooking methods of barbecue.
"Hard work" isn't physical–it's emotional.
Got your start with the major players but not sure what to order in the sea of mid-tier whiskey options?
Cutting through the confusion: A breakdown of common knife terminology.
You don't have to be a traumatized father fighting a fungi-based zombie apocalypse to wear this jacket.
We've researched the best men's winter coats, based on material composition, product rating, and price.
Life can be overwhelming - Here's a proven method used by fighter pilots to make smart decisions fast and stay on top of it all.
And how to build them in under 30 days.
Do these now to keep your style strong and simple.