G-SHOCK believes a watch should be resilient and stylish; just like a modern man. We're proud to partner with them on this post!

Maximalism is a reaction against minimalism – it’s all about big color, big patterns, and a philosophy that says: Forget “less is more…”

What happens when you build a maximalist watch? You get the G-SHOCK MTGB1000-1A. I mean, just look at the thing… 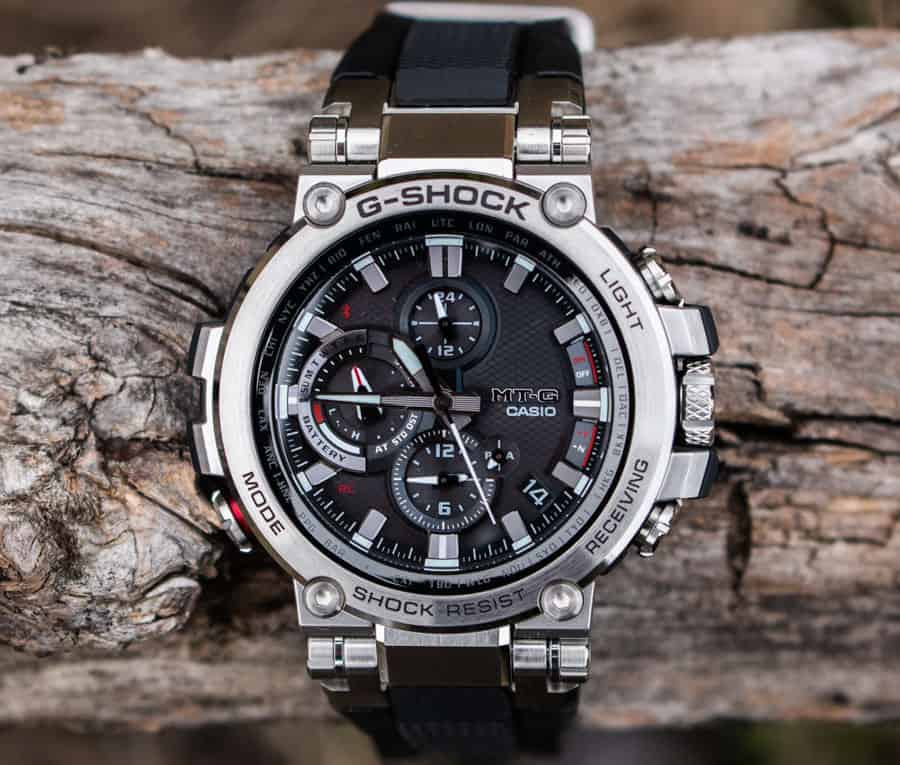 Questions, too: How much does it weigh? How thick is the user manual? Are the buttons as satisfying to push as they look?

It’s the watch equivalent of a tactical power lift.

It’s like a regular G-SHOCK ate aircraft-grade aluminum and another G-SHOCK and … evolved.

It’s a watch that can literally crush other watches.

Origins Of A Beast

The G-SHOCK line was born in the early '80s when a team of engineers was assembled by master watch designer Kikuo Ibe to build an unbreakable watch. After years of testing and hundreds of prototypes, Ibe hit on the concept that underlies every G-SHOCK that followed: the “floating module.”

In earthquake-prone cities, the tallest skyscrapers are built with a floating foundation that’s designed to receive and dissipate seismic shockwaves rather than pass those forces through the building’s structure. The same principle applies to G-SHOCK technology: the watch is suspended within a module that contacts the case at just a few points, giving it huge shock protection with minimal materials.

On the MTGB1000-1A, the floating module design isn’t subtle. The layers of casing that contain the floating module are laid bare as a stylistic statement. A precision-crafted metal guard structure fits over a carbon-fiber reinforced resin case containing the five separate motors that drive the watch’s complex movements. 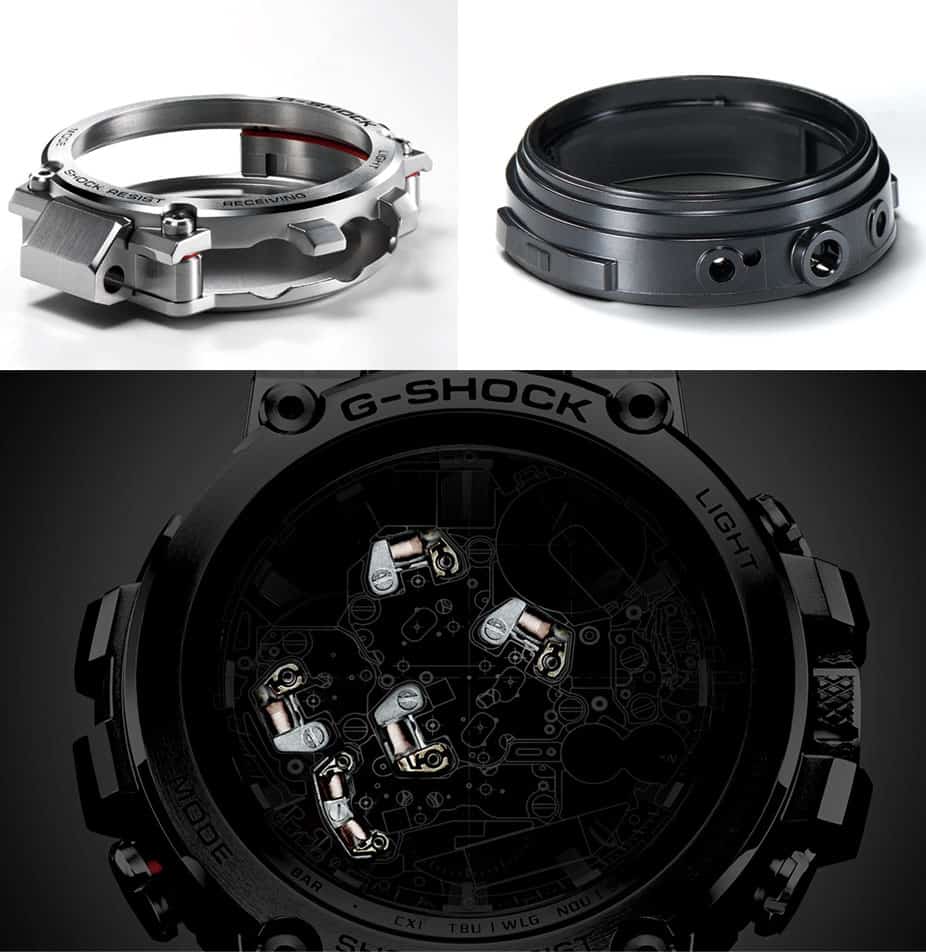 G-SHOCK watches are already prized by special forces, first responders, and adventurers for their toughness. Stories of G-SHOCKs doing multiple tours of duty in Iraq and Afghanistan are by now so plentiful they don’t even surprise anyone anymore.

So what kind of toughness-crazed maniac would go and make a watch that’s tougher? Who builds a tank and then says, “You know what this tank needs? More tank.” 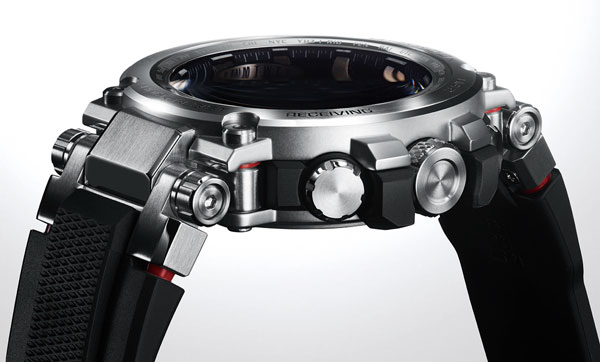 So do you – a puny civilian and not a mythical being made of rock and hate – need a watch this tough? We can answer that question with another question.

The average 0-60 mph time for a car in the U.S. is around eight seconds – much faster than it was 50 years ago. Do you, a non-special operator, need that kind of acceleration? Of course you do.

Once you have a capability, you don’t want to go without it again.

You buy a smartwatch for the connectivity, right? What if you could get high-IQ features in a watch that, if you dropped it, punches the ground instead of breaking?

The MT-G MTGB1000-1A isn’t just a chiseled jaw in watch form – it packs some serious tech, too. 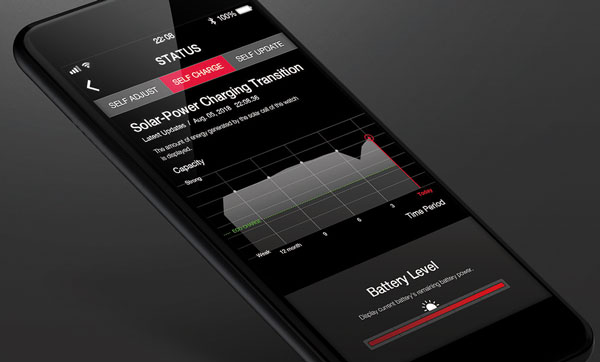 The paired smartphone app lets you set time, alarms, and tells you radio time reception status, solar power-generation status and internal data updating. The app also enables you to set different world times, so if you’re going to sleep on the San Francisco to Shanghai long haul you’ll wake up with the correct time already swapped on your wrist.

The app can even help you locate your watch via Bluetooth if you set it down and forget it somewhere.

Another feature that sets this G SHOCK apart is the metal integrated in to its design. In addition to the all-metal outer case, the band connector, dials, and screws are all premium, Sallaz polished metal.

Sallaz polishing stands out as a technique first used by Swiss watch manufacturers, but not primarily found in high-end Japanese makes.

At this point, it’s worth returning to and breaking down the phrase “radio time reception status” – because what it means is pretty cool.

Multi-Band 6 Atomic Timekeeping means the MT-G MTGB1000-1A is embedded with a radio antenna that receives radio waves from six transmitting stations worldwide. Receiving these transmissions allows the watch to set itself to standard atomic time – the most precise in the world. 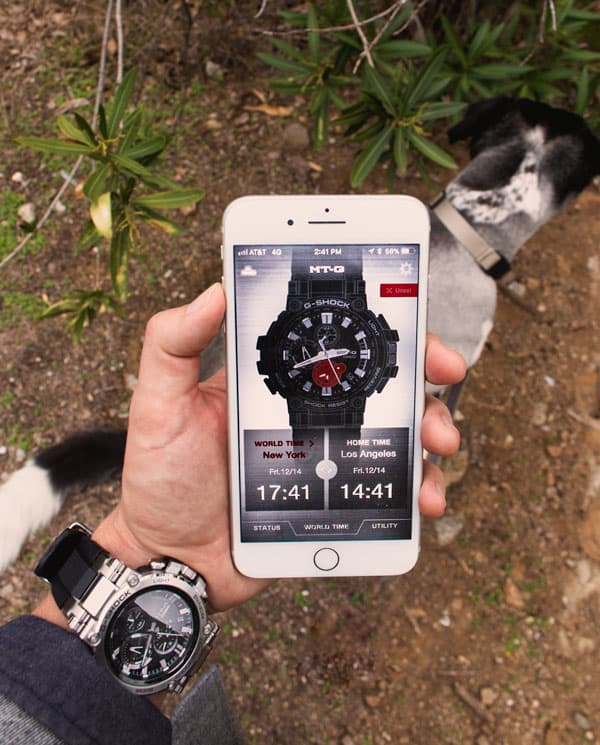 It also means the MT-G will adjust itself when you cross time zones. One of the smaller dials is the time in a different city – The MT-G will swap the dials as you cross the zone line. Pretty awesome.

But what about a dead battery? No battery power = no fancy atomic doo-dads, right?

Wrong. Did you really think a watch this tough can run out of battery? The MTGB1000-1A charges off of both solar radiation (i.e., sunlight) and indoor illumination, meaning it won’t lose power unless you decide to live in a cave for a year.

The MT-G MTGB1000-1A has all the usual tough-guy watch features, as well. Sapphire crystal protects against scratches and it boasts the usual G-SHOCK standard of 200 meters of water resistance and drop resistance.

You might think such a wrist tank is tough to wear, but the rubber band is surprisingly plush and the whole package weighs in under 16 ounces. Not bad for having the equivalent of a wrist-top JTAC.

It’s that this watch exists.

It’s the most of a line of watches that were already the most. The most of the most.

Is such a creation necessary? Not unless you’re an asteroid miner. But it’s thrilling and a lot of fun to behold.

See how we wear the MT-G in our Winter in the City Live Action Getup!

What does it mean to me the toughest of the tough in a watch? Share your thoughts below!

StyleWatches
Getting the perfect fit right off the rack is like winning the lottery. Whether you wear suits or selvedge denim, this guide demystifies the process of tailoring and alterations.
Discipline is a skill anyone can learn.
Cutting through the confusion: A breakdown of common knife terminology.
Did You Miss These?
Save your face, get a better shave.
Your mid-20's can be a rough time. Our man's got the 6 stages every quarter-lifer goes through. Here's to making it out on top.
We find ourselves in a funny situation these days: We say "yes" to all the annoying schedule stretching requests, but say "no" to all the things that will help us grow as individuals.
You don't have to be a traumatized father fighting a fungi-based zombie apocalypse to wear this jacket.
We've researched the best men's winter coats, based on material composition, product rating, and price.
Life can be overwhelming - Here's a proven method used by fighter pilots to make smart decisions fast and stay on top of it all.
And how to build them in under 30 days.
Do these now to keep your style strong and simple.
If you want to know how some rich actor gets in amazing shape, you're in the wrong place.