The Harrington Jacket: Best Picks, How to Wear It & History

A series of retrospectives on the most storied and timeless styles in men's fashion. Today: The classic cool of the Harrington Jacket.
28 July,2022By Pyung Kim
This post may contain affiliate links, read about our editorial promise

There is arguably no other jacket in the world of menswear that simultaneously embodies effortless “cool” and “buttoned-up” prep as well as the Harrington jacket, which has become a sartorial symbol of refined, yet rugged masculinity.

Reflecting on menswear tradition is not just for fashion nerds indulging in sartorial nostalgia. Understanding the origin and evolution of certain aspects of men’s fashion (like we detailed with The History of Tweed) gives us valuable insight as to which styles stand the test of time – and why. Rebel With a Jacket

James Dean famously donned the Harrington jacket the 1955 film “Rebel Without a Cause”, in which he gave it a defiant, uncouth flair by wearing it half zipped, showing off another style symbol of ‘50s youth: the T-shirt. 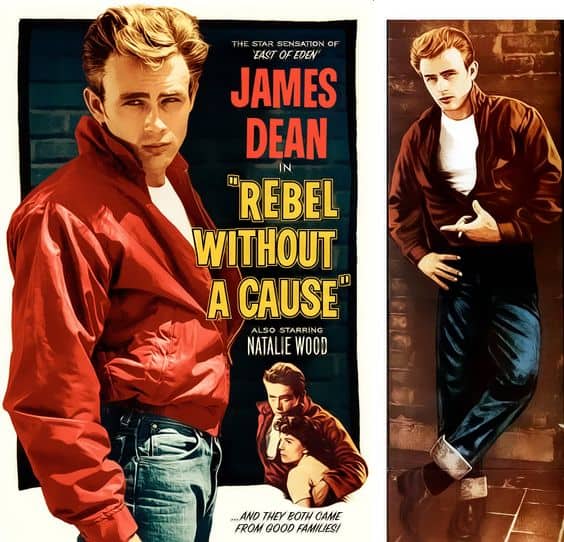 While the Harrington has certainly always belonged in the old-school preppy aesthetic, it was also revived time and again by the UK counterculture scenes of the ‘60s, ‘70s, and ‘80s. But the Harrington – known in the early days as a “Blouson” – was not just for rockers and rebels. Sometimes also referred to as a golf jacket or windbreaker, the Harrington jacket has also been the casual outerwear of choice among many US Presidents whenever they eschewed the suit and tie. JFK wore it while sailing, Bill Clinton almost made it his unofficial trademark, and it was often George W. Bush's choice for when he was “out in the field”, addressing first responders or aircraft carriers. 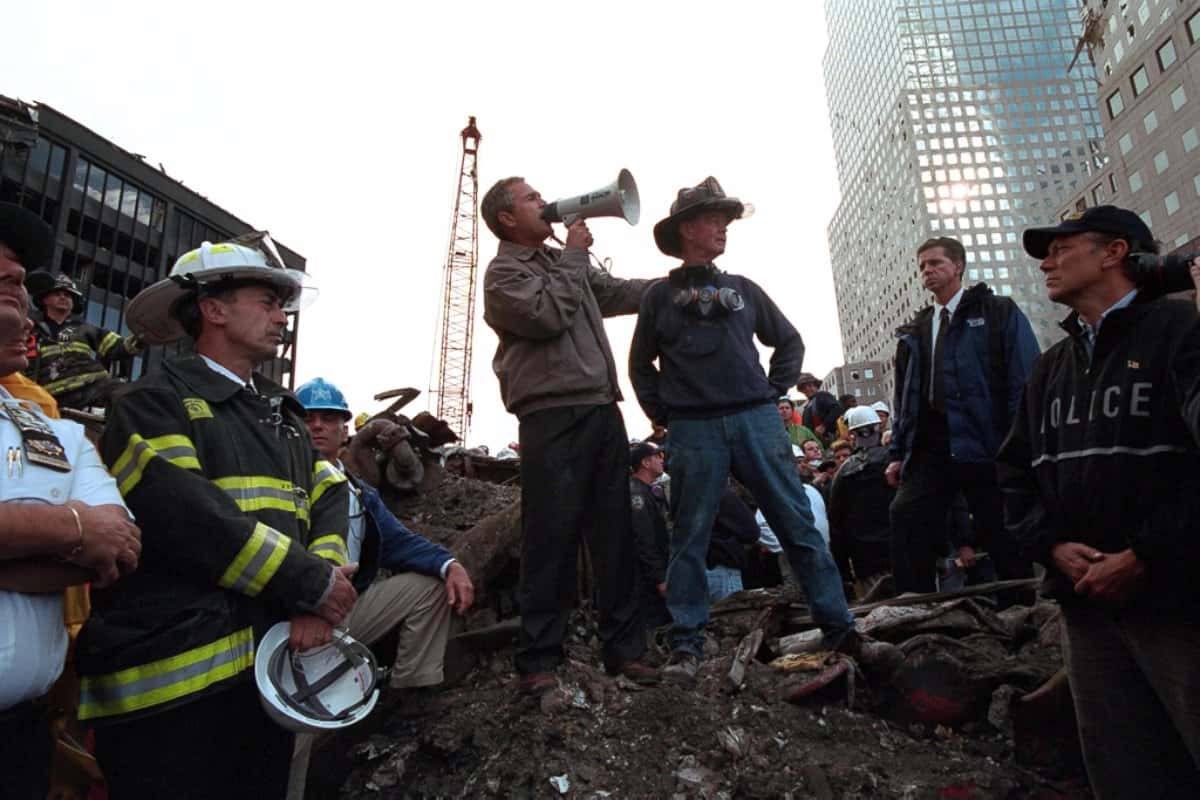 By the way – “Blouson” might sound a bit girly for what has become such a manly style staple, but the origin of the word is not gender specific, and is derived from the French Proveçal dialect for “short wool”. What we call “Harrington” has come to be a bit of a generic umbrella term for a casual collared jacket that is loose, short, and/or cinched around the waist. You can count the World War II-era Flight Jacket as one of its relatives, and it’s also a cousin to similar styles like the Eisenhower or Bomber jacket. The lines between these styles have been somewhat blurred by the modern retail world so these monikers have become somewhat interchangeable. But we’re focusing here on the Harrington in the most traditional sense: lightweight, with a stand collar, ribbed or tapered waist, and slanted or vertical pockets. It didn’t all start with James Dean and JFK. To many, Elvis Presley's turn in the “Blouson” jacket in the 1958 film “King Creole” is just as iconic. 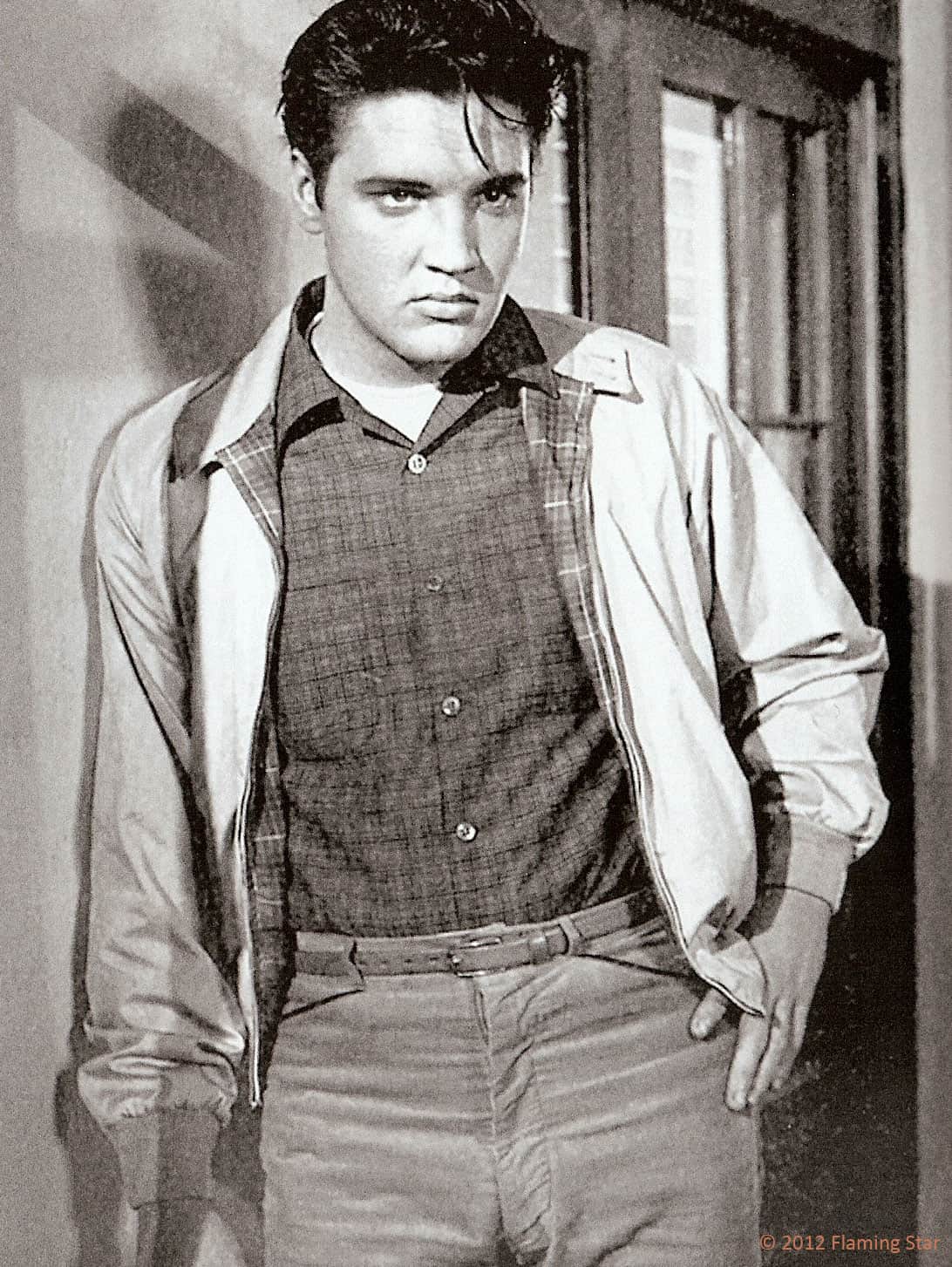 One of the earliest kingmakers of the Harrington? The King himself

Frank Sinatra and Steve McQueen were so often photographed in the jacket in both their movies and personal lives that you could almost consider them unofficial ambassadors of the Harrington. 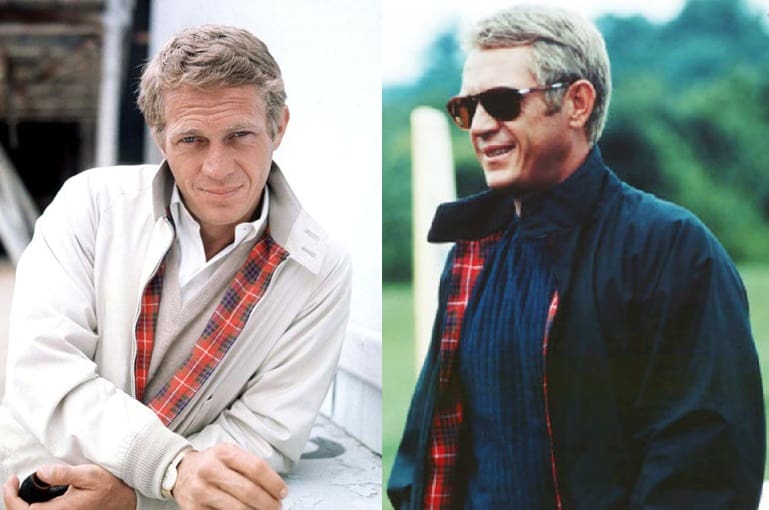 Steve McQueen in the original Baracuta G9, the jacket that started it all

In the 1960’s the jacket was famously worn by actor Ryan O'Neal in the primetime soap “Peyton Place” – and his character’s name was Rodney Harrington (hence the jacket’s nickname). But the man who should really be credited with the name “Harrington” catching on is John Simons, owner of the Ivy Shop, a trendsetting clothier in southwest London. After receiving the new G9 from Baracuta, Simons displayed it in his windows with a card attached to it. On the card he wrote “The Rodney Harrington Style”. After a while, he and his associates just started calling it the Harrington. 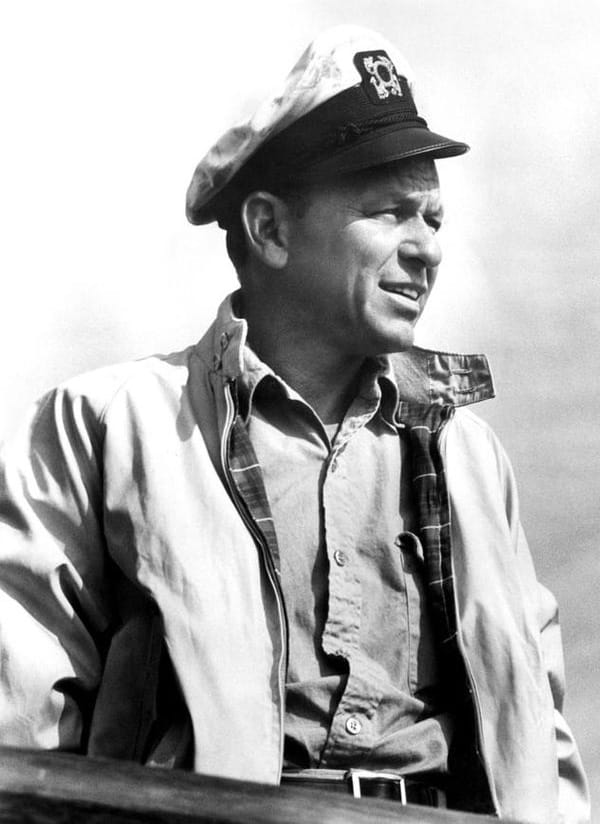 Pop culture icons like Ol' Blue Eyes came to be so strongly associated with the jacket that in 2007, Baracuta celebrated their 70th anniversary by releasing a line of special edition G9 jackets with quotes by Presley, McQueen, and Sinatra printed on the lining

Even Arnold Palmer was so taken by the jacket that he collaborated with Baracuta when he launched his menswear collection in 1970. One of the more memorable pop culture appearances of the Harrington in recent years (and certainly the most badass) is this slimmer cut G4 version worn by Daniel Craig in 2008's “Quantum of Solace”: 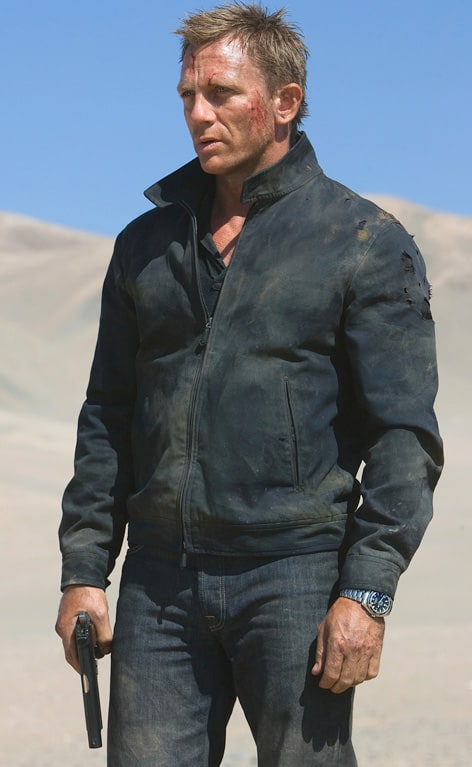 A battle-worn Harrington was especially fitting for Craig's incarnation of 007: at the intersection of classic British elegance and rough-and-tumble rogue. Read our (00)7 Secrets to Bond's Timeless Style

If we’re going to talk about the true origin of the Harrington (aka the classic Blouson), we must go back before its rebellious years to 1937, when John and Isaac Miller of Manchester, owners of the famous Baracuta company, first started making what they called the “G9 Blouson”, with its stand-up collar, knit cuffs and waist, and slanted flap pockets. Another distinctive feature of the G9 was its red and green tartan lining. This plaid was signed off by Simon Fraser, 24th Lord of the prominent Highland Scottish Clan Fraser of Lovat – now that’s old school

At the time, Baracuta was known for its functional rainwear and was once a supplier to the British troops in 1945 and for England’s World Cup Champion team in 1966 – but when the G9 landed in the US, it quickly became their defining pièce de résistance. The durability and light insulation of the jacket has made it official issue for postal workers and firefighters, as well as the police departments of Germany, Austria, Israel, New Zealand, the UK, and the US. The US Air Force supplies one to each President (with the official seal) to be worn on Air Force One, while the NYPD has been issuing a form of the jacket since 2010: How to Wear a Harrington Jacket

The original G9 was designed for action (the “G” stands for golf). So you can look good in your Harrington even with a simple t-shirt and jeans (a la James Dean), and your favorite pair of boots or sneakers: One of the beauties of the Harrington is its versatility.  You can dress it down but it also goes great with chinos and polos or oxford button downs. And since the Harrington layers well and is a lightweight alternative to almost any jacket, simply replace your sports coat with it: Where to Find a Harrington Jacket

The Harrington has never gone out of style. In fact, their original G9 is still in production. How’s that for timeless?

If $390 for Baracuta's original is too steep, you can opt for a few similar styles at better prices:

If you're looking for a water repellent compromise with a classical design (down to the mini tartan lining), Orvis offers one for $169.

ASOS has a great slim option for $56. Also available in green.

You can score a Harrington with a more classic silhouette on Amazon from Relco for as little as $47.

For men 5'8″ and under looking for smaller options, Peter Manning offers a Harrington that we styled here.

Primer ApprovedSpring StyleStyleStyle EssentialsSummer Style
With 15 outfit examples to get you started.
Lighten up your winter wardrobe.
Getting the perfect fit right off the rack is like winning the lottery. Whether you wear suits or selvedge denim, this guide demystifies the process of tailoring and alterations.
Did You Miss These?
Every guy has had one.  The one girl pivotal in shaping what you are, and probably most importantly, what you're not.
"Whoa! Who brought the cannon?" - Your Uncle Chuck at this year's Thanksgiving pickup game.
Serve drinks that don’t taste like paint thinner without breaking the bank
Discipline is a skill anyone can learn.
Cutting through the confusion: A breakdown of common knife terminology.
You don't have to be a traumatized father fighting a fungi-based zombie apocalypse to wear this jacket.
We've researched the best men's winter coats, based on material composition, product rating, and price.
Life can be overwhelming - Here's a proven method used by fighter pilots to make smart decisions fast and stay on top of it all.
And how to build them in under 30 days.