I covered this drink a couple of years ago in my Tiki Drink article, but let’s dive a little deeper here and talk about its history. To do that, we first need to understand the word sling, which is not unique to this cocktail, but rather a now mostly-obsolete term used in frontier-era America to define a drink comprised of spirits, water (or other liquid), and sugar. A precursor to the cocktail—originally a sling with bitters added to it, now a catch-all description for a mixed alcoholic drink—the sling is now only recognized in the names of a few cocktails, of which The Singapore Sling is likely the most well-known.

If a sling is a mixture of alcohol, water, and sugar, then the Singapore Sling certainly qualifies, but that hardly seems a reasonable way to sum up an eight-ingredient drink. This cocktail is a whole lot more than a traditional sling, featuring a base liquor and three accent liqueurs, plus two different types of fruit juice, plus grenadine and bitters. That’s a lot of stuff going on, even before you add in the soda water. The good news is: with that amount of flavor, there’s no reason to be concerned that the soda’s going to dilute it too much. The cocktail is flavorful, goes down easy, and packs a wallop.

Created exactly one hundred years ago this year by Ngiam Tong Boon, a bartender at the Raffles Hotel in Singapore, and originally called simply a ‘gin sling,’ the drink soon came to be known by the location of its nascence. The Raffles still exists, and they still serve the Singapore Sling, though it’s long since spread to bars around the world. Until the recent craft cocktail renaissance, the Singapore Sling’s most common ingredient list included sour mix and the kind of grenadine that’s basically just corn syrup dyed pink. How unfortunate! Thankfully, times have changed, and you can find a lot more places that are adhering to the original recipe (or slightly variants). As always, fresh juices and real pomegranate grenadine are a must. You’ll taste the difference! 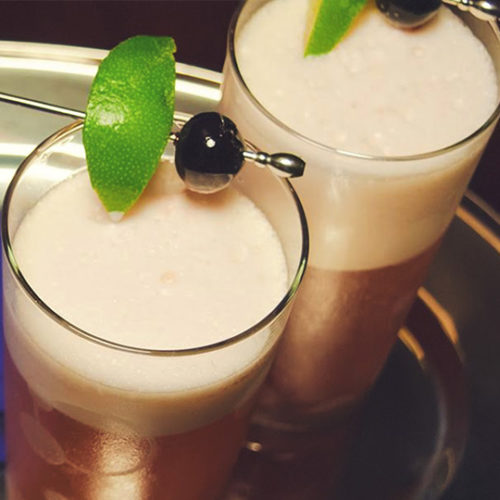 Cocktails & AlcoholIt’s Friday…Have a Drink
Discipline is a skill anyone can learn.
Cutting through the confusion: A breakdown of common knife terminology.
You don't have to be a traumatized father fighting a fungi-based zombie apocalypse to wear this jacket.
Did You Miss These?
Getting back to the body you want begins between your ears.
Scientifically-proven tools for mastering your mind.
Most men see patterns and run for the hills. Patterns don't have to be scary and when used properly they will only enhance a lackluster wardrobe. Learn how to identify and wear the following ... [more]
We've researched the best men's winter coats, based on material composition, product rating, and price.
Life can be overwhelming - Here's a proven method used by fighter pilots to make smart decisions fast and stay on top of it all.
And how to build them in under 30 days.
Do these now to keep your style strong and simple.
If you want to know how some rich actor gets in amazing shape, you're in the wrong place.
A look back as we gear up to move forward.