sidebar_content
Skip to Main Navigation Skip to Content
An interesting twist on the true-blue recipe will bring the booze further to the front of this long drink.
29 September,2020By Christopher Buecheler / Photos By Christopher Buecheler
This post may contain affiliate links, read about our editorial promise

At first glance, the Cuba Libre might appear to be nothing more than that bastion of sports bars and frat houses everywhere, the Rum-n-Coke. That’s probably because the two are largely identical, although the Cuba Libre contains actual lime juice and the Rum-n-Coke usually just has a sad-looking lime wedge—often so dry it could be used as a sponge—perched atop the glass.

Nonetheless, the Cuba Libre is an important part of cocktail history, and I’d be remiss not to cover it here. Still, it’s hard for me to even consider “spirit, soda, lime” as a cocktail, so in addition to the regular recipe, I’m going to give you my version. If you’ll forgive the hubris, I think you’ll find that the latter beats the former every day of the week.

The Cuba Libre was invented in Havana, Cuba’s capital, in the very early days of the twentieth century, as soldiers from the United States found themselves stationed in Cuba with plenty of time for R&R in the years immediately following the Spanish-American war. Cola had just come to the island, and at some point, someone had the bright idea to mix it with the local distilled liquor. Deliciousness ensued. The good people at Bacardi have an almost-surely apocryphal story involving a US military captain ordering the drink, a group of soldiers being intrigued enough to try a round themselves, and toasting with “¡Por Cuba Libre!” in celebration of the newly-liberated country.

By the 1930s, the drink was widespread through the south, but it took a 1945 song by The Andrews Sisters (called “Rum and Coca-Cola”) to popularize it throughout the country. Since then, by either name, it’s been a staple of just about every bar you could walk into, from absolute dives, to the highest-class joints. This long drink, typically served in a highball glass, contains a whopping twelve ounces of cola to about an ounce and a half of rum. In fact, here’s the official recipe:

That’s it. That’s the list. Pour over ice in a highball glass and stir gently to combine. Garnish with a lime wedge. This is a fine summer sipping drink, and no one will look at you askance for imbibing it as is, but let’s take a look at my recipe, which brings the booze further to the front and adds a few ingredients for depth.

Now, is that exactly a Cuba Libre? No. Which is why I included the true-blue recipe. But for my money, it’s a lot more interesting, and a lot more delicious. Give it a try; I think you’ll agree! 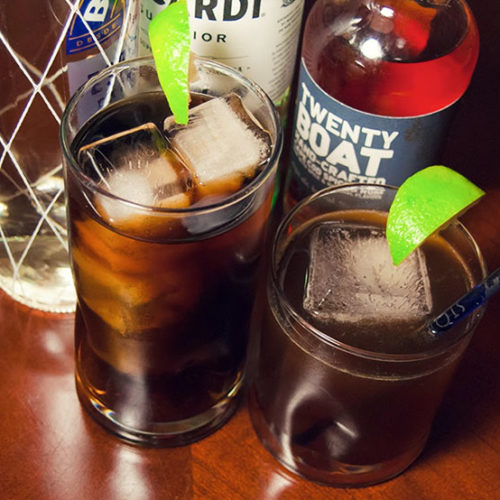 Cocktails & AlcoholIt’s Friday…Have a Drink
Lighten up your winter wardrobe.
Getting the perfect fit right off the rack is like winning the lottery. Whether you wear suits or selvedge denim, this guide demystifies the process of tailoring and alterations.
Discipline is a skill anyone can learn.
Did You Miss These?
To get what everyone else wants, you must do what no one else does.
Go beyond the bland advice offered by friends and blogs to discover what it’s really like to have a baby and get pro tips for preparing to make it the best it can be.
Your mid-20's can be a rough time. Our man's got the 6 stages every quarter-lifer goes through. Here's to making it out on top.
Cutting through the confusion: A breakdown of common knife terminology.
You don't have to be a traumatized father fighting a fungi-based zombie apocalypse to wear this jacket.
We've researched the best men's winter coats, based on material composition, product rating, and price.
Life can be overwhelming - Here's a proven method used by fighter pilots to make smart decisions fast and stay on top of it all.
And how to build them in under 30 days.
Do these now to keep your style strong and simple.