This one isn’t a classic. In fact, it’s an invention of my own, but I used several educated guesses based on what I’ve learned while making all of these drinks (and writing about them) in order to put it together.

The first thing was: I knew I wanted to try a split base. Base liquors are typically unsweetened spirits that usually have the largest proportion in a given cocktail, unless it’s a highball. Whiskey, gin, vodka, tequila/mescal, rum, and brandy are the most common base liquors, and of those brandy and mescal play in supporting roles most easily (and vodka, since it’s effectively flavorless). I use mescal a lot to add smokiness to drinks, but that’s not what I was looking for here, so I settled on brandy.

I wanted to use rum because, well, I like rum, but also because I’d just gotten a new bottle and wanted to try it out. So that gave me my split base, an ounce each of the rum and brandy. I then added some sweet vermouth, because I wanted a cocktail that was in the same realm as a Manhattan. To this I added fino sherry to bring nuttiness and depth of flavor, but fino sherry is pretty dry so I felt the drink could use a bit more sweetness. A little maraschino did the trick. Some Peychaud’s bitters add a final dash of flavor to the cocktail.

I made this several times, using different proportions, before calling the recipe final. I’m pleased with it. Considering there’s only an ounce of rum in this thing, you can really taste it. It doesn’t overwhelm the other flavors, but there’s no question this is a rum cocktail. It’s really quite good. Strong but not too boozy, easily drinkable but complex. Give it a shot! 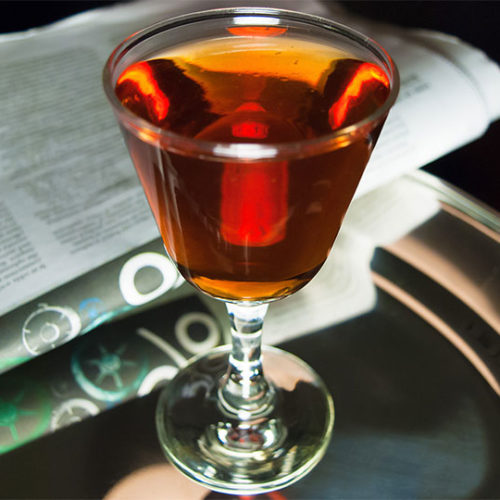 Cocktails & AlcoholIt’s Friday…Have a Drink
Great, dressier summer style at an attractive price.
Summer Wedding ✓Office ✓ Looking like Model ✓
Look forward to dressing sharp when it's sweltering.
Did You Miss These?
The secrets to effective leadership aren’t just in books, they’re in our stories.
If your nipples are permanently set to “stun”, read on.
Most men see patterns and run for the hills. Patterns don't have to be scary and when used properly they will only enhance a lackluster wardrobe. Learn how to identify and wear the following ... [more]
To master your life, you have to master yourself first.
Simple and very effective.
Add a new option to your rotation.
The best Father's Day gifts (that aren't a "#1 Dad" mug).
When you find a staple that works for you, upgrade to a version that features unique design details, premium materials, or sustainable construction.
Let's do summer on purpose.