sidebar_content
Skip to Main Navigation Skip to Content
A savory cocktail that is perfect for sipping.
8 October,2020By Christopher Buecheler
This post may contain affiliate links, read about our editorial promise

The Old Pal is pretty obviously a direct descendant of the Negroni, though it’s been tweaked not only in terms of base liquor, but also in what fortified wine is used to act as a bridge between the hard stuff and the bitter, Italian liqueur Campari. Drier than a Negroni, this cocktail may not be for the faint of heart. If you’re not yet a Campari fan, consider starting with the drink’s older sibling, or swapping out the Campari for Aperol, which has a similar flavor profile without being quite so bitter (I talked about Aperol extensively in my recent article on the Starfire).

Aficionados may also note the Old Pal’s similarity to the Boulevardier. It’s true, they’re quite similar, although again the Boulevardier uses sweet vermouth, and not dry. Both drinks, in fact, appear to have been first chronicled by Harry MacElhone, but the Old Pal’s appearance in the 1922 edition of Harry’s ABCs of Mixing Cocktails (where it’s credited to one mister Sparrow Robertson, Sporting Editor of Paris’s New York Herald) predates the first mention of the Boulevardier, which occurs in 1927’s follow-up, Barflies and Cocktails. Interestingly, MacElhone failed to include the Old Pal in the second book, and it doesn’t show up again until 1930, in Harry Craddock’s seminal drinks tome, The Savoy Cocktail Book [1].

I like this drink a lot. The spicy rye whiskey combines in an interesting manner with the Campari, and the dry vermouth helps smooth things out without making it overly sweet and cloying. It’s a great drink for sipping while sitting out on the deck on a summer evening. In fact, if you want to make it more of a summer cooler, it takes very well to adding a few ice cubes and an ounce or two of club soda.

[1] Thanks to Wikipedia for this info 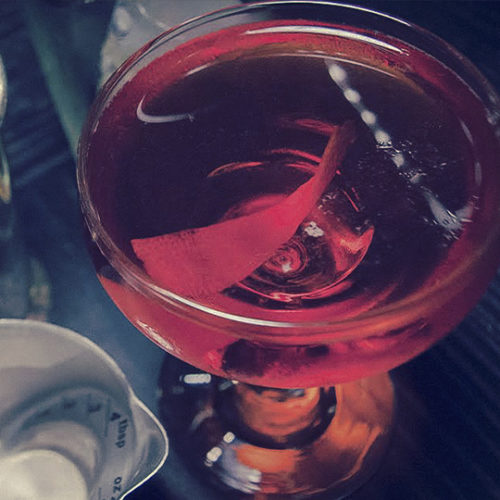 Cocktails & AlcoholIt’s Friday…Have a Drink
With 15 outfit examples to get you started.
Lighten up your winter wardrobe.
Getting the perfect fit right off the rack is like winning the lottery. Whether you wear suits or selvedge denim, this guide demystifies the process of tailoring and alterations.
Did You Miss These?
Originally designed as tool watches for divers, dive watches have been a fashion staple for decades. Our resident watch fanatic and professional diver Chris Scott discusses the history of these ... [more]
The ad man who inspired Mad Men created brainstorming to be brutally efficient, so where did we go wrong?
Button up: Men have about a dozen types of shirt collars to choose from, each with their own advantages and considerations. We break them down.
Discipline is a skill anyone can learn.
Cutting through the confusion: A breakdown of common knife terminology.
You don't have to be a traumatized father fighting a fungi-based zombie apocalypse to wear this jacket.
We've researched the best men's winter coats, based on material composition, product rating, and price.
Life can be overwhelming - Here's a proven method used by fighter pilots to make smart decisions fast and stay on top of it all.
And how to build them in under 30 days.