sidebar_content
Skip to Main Navigation Skip to Content
The key to a good julep is fresh mint. You want a whole bunch of it, both to make the drink and to garnish it.
13 January,2021By Christopher Buecheler / Photos By Christopher Buecheler
This post may contain affiliate links, read about our editorial promise

The Kentucky Derby, the most famous horse race in America, happens tomorrow, and that gives me a good opportunity to cover a simple, straightforward classic drink that we’ve never managed to get to before in this series: the Mint Julep.

Juleps, taken as a recreational beverage, arrived on the scene sometime in the eighteenth century, but likely began their life much earlier as medicinal drinks – basically adding sugar and water to alcohol-based infusions that, on their own, were unpalatable for most people (like trying to drink a shot glass full of Angostura bitters). Juleps, and in particular the mint julep, are heavily associated with the American South, specifically Kentucky, home of that great American spirit, bourbon. The classic Mint Julep brings up images of large plantations, with folks dressed to the nines in their best white suits sitting on porches in the lazy heat of a summer afternoon, sipping slowly.

There’s good reason for this image: The julep as we know it was predominantly a drink of the rich, due in large part to the ice required in its construction. Commercial refrigeration didn’t exist in the 1800s. Ice was carved in massive blocks from northern lakes during the winter and stored through the summer in vast warehouses. Smaller blocks were then shipped off to people who could afford it. Most simply did without. Plantation owners could afford ice for their juleps. The common man had to make do with “bittered slings,” the forerunners of the modern cocktail, the most famous of which is still around today: the Old Fashioned.

Going to a Kentucky Derby party and don't have a clue about what to wear? Here are 3 Getups you can easily pull together.

Juleps don’t have to be made with bourbon, and in fact during their nascence were often made with brandy (particularly peach brandy – another Southern specialty). Still, when most people think Mint Julep, they think bourbon, and they often think about the Kentucky Derby. This is no coincidence, since Churchill Downs, the racetrack at which the Derby is held, began associating the drink with the event in 1938, and serves more than a hundred thousand of them every year1.

The key to a good julep is fresh mint. You want a whole bunch of it, both to make the drink and to garnish it. Your mint should be bright and healthy, free from blemishes, and not wilting. If possible, I recommend snagging a few stalks from a living plant – mint is quite possibly the easiest plant in the world to grow and thrives during the spring and summer months on balconies, fire escapes, windowsills, and anywhere else it can get sunlight. Fresh, fragrant mint is what separates a good Mint Julep from a glass of watery bourbon with some limp green shapes floating around in it!

This Derby day (or any other warm day where an iced drink seems warranted), grab some decent mint, a nice bottle of bourbon, a pinch of sugar, and plenty of ice, and follow the recipe below.

Some drink their juleps with a straw, but I prefer to drink right from the cup. This presses the mint garnish up against your nose and gives you an extra burst of aromatics. 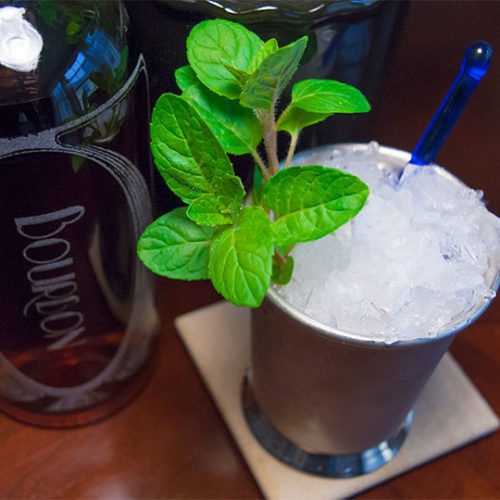 Cocktails & AlcoholIt’s Friday…Have a Drink
Be the talk of the town (or at least the watercooler) with one of these perfect gift swap ideas.
Bundling up doesn't end at your wrists.
Bring your body and mind back into a relaxed state.
Did You Miss These?
A super easy exercise to give you the strength to "say no" to your cravings.
Getting the fit right of your untucked shirts is the key essential to having a sharp, intentional style. We'll show you how to check for proper length, width, and sleeve length in the fitting room.
Many guys don't think they can be an "alpha male" because they're not arrogant jerks. There is another way.
There’s no time like the present to check some names off your gift list.
Your kids need you; your phone doesn’t.
The last hurrah of the Black Friday sales weekend.
Black Friday is here. And we've put in some serious time distilling what's worth shopping and what's worth skipping.
Save on gifts and stock up on essentials.
Cigars are best enjoyed socially - here’s our crash course on how to build the best experience.