sidebar_content
Skip to Main Navigation Skip to Content
The real key here is to use enough rum and other ingredients so that you still have a rich, flavorful drink after adding the hot water.
14 January,2021By Christopher Buecheler / Photos By Christopher Buecheler
This post may contain affiliate links, read about our editorial promise

It’s winter here in America, and as of this writing the northeast is buried under a couple feet of snow. Seems like a good time to drink something warm!

Toddies have been around for a long time. In their most basic form, they’re essentially a sling—spirit, water, sugar—with an addition of aromatics such as nutmeg or lemon peel. The can be served hot or cold, but these days the name is synonymous with hot drinks. The etymology is unknown, though some believe it derives from Tadi, an Indian palm wine. They differ from another classic warm drink, the Negus, in that they do not contain wine.

The Hot Toddy is a classic whose construction is heavily debated. Celebrated bartender Jeffrey Morgenthaler does a good job of summing it up in a blog post: basically everyone has their own idea of what a Toddy should contain, and early Toddy recipes are pretty boring. So, in the modern era, due to the addition of citrus and other flavors, they’ve become something more like hot punches. Purists can stick with their diluted brandy and sugar if they want, but I’m more on Jeffrey’s side: modern Toddies are better.

Toddy recipes most often use honey, but I like maple syrup better, so I decided to go with that. It worked well. The maple flavor adds an interesting depth to the drink, as do the orange and Tiki bitters, neither of which are technically used in a Hot Toddy, but both of which make it that much more delicious. If you don’t have Tiki bitters, any aromatic (such as Angostura) will work.

The real key here is to use enough rum and other ingredients so that you still have a rich, flavorful drink after adding the hot water. It’s easy for a Toddy to become a tepid, thin, boring drink if you’re not careful. To help avoid that, start with a pre-warmed mug, use lots of booze, and don’t worry about filling it to the top. A couple ounces of water are all you should need. 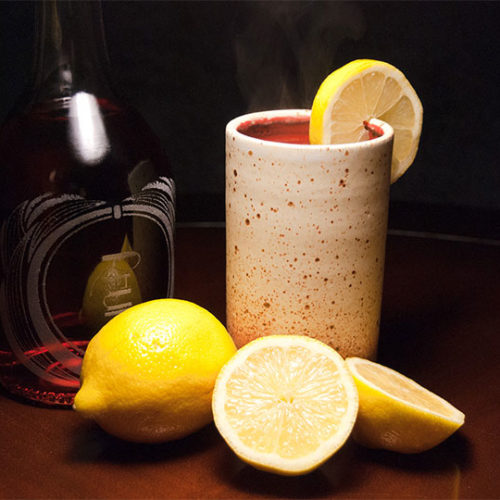 Cocktails & AlcoholIt’s Friday…Have a Drink
Lighten up your winter wardrobe.
Getting the perfect fit right off the rack is like winning the lottery. Whether you wear suits or selvedge denim, this guide demystifies the process of tailoring and alterations.
Discipline is a skill anyone can learn.
Did You Miss These?
If it's good enough for the Apollo 11 astronauts, it's good enough for us.
A checklist for the in's and out's of traveling for work.
Plants bring your home to life – here's how to, you know, not kill them.
Cutting through the confusion: A breakdown of common knife terminology.
You don't have to be a traumatized father fighting a fungi-based zombie apocalypse to wear this jacket.
We've researched the best men's winter coats, based on material composition, product rating, and price.
Life can be overwhelming - Here's a proven method used by fighter pilots to make smart decisions fast and stay on top of it all.
And how to build them in under 30 days.
Do these now to keep your style strong and simple.