Dia de Los Muertos is actually made up of multiple days, starting on October 31st and ending on November 2nd. These dates were set by the Catholic Church after appropriating the originally-pagan holiday from local cultures (something the Catholic Church has historically been very good at), in order to have the celebration coincide with the Catholic festival of Allhallowtide[1].

Dia de Los Muertos is probably best known in the States for the ornately painted skulls used both as decorations and makeup (photo by Montecruz Foto). These decorations can be stunningly gorgeous, and while it’s a natural reaction to want to take part, it’s really not a time for random people to wear gaudy outfits, get drunk on bad tequila margaritas, and eat nachos.

The holiday is supposed to be a day of remembrance and prayer for deceased loved ones. As such, despite the frequently gorgeous visuals and festival-like atmosphere, a certain level of respect needs to be observed. With that in mind, if we’re going to appreciate another culture through drink, then let’s do it with a real Mexican recipe.

Which brings us to Mexican Hot Chocolate. Simple to create, using only a few basic ingredients that are readily available in grocery stores, it’s nonetheless a rich, delicious experience. This is the right time of year for it, too; October is transitioning into November, and it’s cold up here in the northeast. We could use some sweet, warming beverages … especially if they include a shot or two of agave liquor (which secretly plays beautifully with chocolate). If you’re lactose-intolerant, it’s acceptably traditional to make this drink with water instead of milk. Slightly less traditional, but killing two birds with one stone, you could replace both the milk and the almond meal with almond milk, which is the route I like to take.

Now, if we were really going to do this right, we’d need a molinillo with which to whip the coffee into frothy goodness. I, alas, do not have one, so I had to use an Aerolatte. I hope the good people of Mexico will forgive me as I raise my glass to them and try to honor their holiday. Salud!

Items in parentheses are what I used when making this drink, and are included as recommendations. 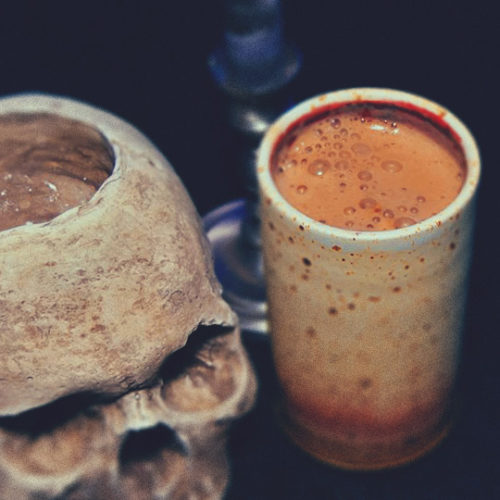 Cocktails & AlcoholIt’s Friday…Have a Drink
Getting the perfect fit right off the rack is like winning the lottery. Whether you wear suits or selvedge denim, this guide demystifies the process of tailoring and alterations.
Discipline is a skill anyone can learn.
Cutting through the confusion: A breakdown of common knife terminology.
Did You Miss These?
Got your start with the major players but not sure what to order in the sea of mid-tier whiskey options?
A checklist for the in's and out's of traveling for work.
Few life events can cause as much upheaval and pain as a relationship ending with someone you cared about. Whether you’re the breaker or the breakee, odds are you will feel a range of emotions for ... [more]
You don't have to be a traumatized father fighting a fungi-based zombie apocalypse to wear this jacket.
We've researched the best men's winter coats, based on material composition, product rating, and price.
Life can be overwhelming - Here's a proven method used by fighter pilots to make smart decisions fast and stay on top of it all.
And how to build them in under 30 days.
Do these now to keep your style strong and simple.
If you want to know how some rich actor gets in amazing shape, you're in the wrong place.