Let’s talk about cocktail size. When making cocktails, as with other things you may have heard about, it’s not really so much the size of your drink, as how much effort you put into making it. Slop a bunch of booze into a cup and toss some ice on top of it, and you’re going to get something uninteresting. Be careful in your measurements, stir to the right amount of dilution, strain into a nice glass, use a fresh garnish, and you’re going to create something that’s beyond delicious – it’s actually a little bit magical.

In America, it’s still not uncommon to go into a restaurant bar, ask for a Martini, and get 7 ounces of basically pure gin with a shaker on the side full of more. Which is great if your goal is to sit down, eat a burger, and then forget you ever ate that burger or what happened for the following four hours … but it’s maybe not always what one is looking for in a drink.

So, we have the Caprice. Small even by craft cocktail standards, coming in at just 2.5 ounces of booze, this drink nonetheless packs in plenty of flavor. It’s one of many drinks in a category we’ve discussed before: “Martinis with stuff in ‘em” … but the balance here is immaculate and delicious, which is why I strongly advise not screwing with the proportions. Use a traditional, juniper-heavy London Dry gin, a nice dry vermouth, and a good citrus-forward orange bitters, and you’ll not only have something terrific to drink, you’ll have room in your liver for another.

This drink comes from a relatively obscure (and sadly out of print) cocktail book by Hyman Gale and Gerald Marco called The How and When. First published in 1937, it was updated several times in the 1940s. Gale and Marco ran Marco’s liquor store in Chicago, where they imported wine and spirits, so they knew a thing or two about booze! Whether this is a creation of their own or not is uncertain, but let’s assume it is and tip a glass to them. Messieurs Hyman and Gale, thanks for this tiny, tasty tipple! 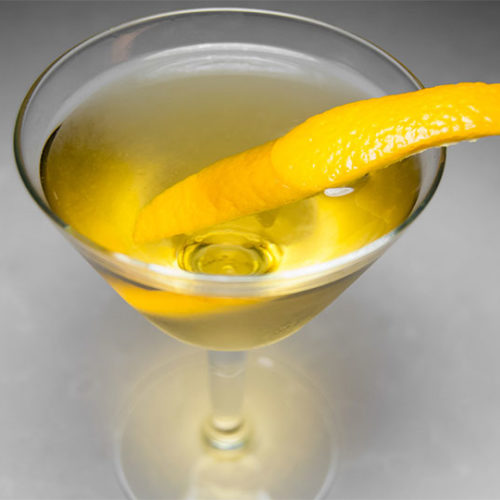 Cocktails & AlcoholIt’s Friday…Have a Drink
Bring your body and mind back into a relaxed state.
There’s no time like the present to check some names off your gift list.
Your kids need you; your phone doesn’t.
Did You Miss These?
Having a routine can help make your life easy. It can also make you very, very unhappy.
You know what's more impressive than serving a date wine during dinner? Serving them a glass of port afterward. (And it tastes pretty damn good, too.) We'll teach you everything you need to get ... [more]
Has it ever occurred to you that maybe it's them, not you?
The last hurrah of the Black Friday sales weekend.
Black Friday is here. And we've put in some serious time distilling what's worth shopping and what's worth skipping.
Save on gifts and stock up on essentials.
Cigars are best enjoyed socially - here’s our crash course on how to build the best experience.
Coming up with gift ideas that are reasonably priced can be a chore. These 100 gifts will make any man happy as a kid, and most are quite affordable.
Yes, the holidays are all about giving to others – but that doesn't mean you can't benefit from the deals too.