In the formative years of cocktailing, the early to mid-1800s, most drinks were just a shot of liquor with a little water, a little sugar, and a splash of bitters. In fact, this was also sometimes referred to as a bittered sling, the sling being a drink of liquor, water, and sugar that predates the term “cocktail”. As liqueurs became more widely available in the latter half of the nineteenth century, “improved” versions of cocktails began to feature additional liqueurs, citrus zests, and other flavors. The Improved Whiskey Cocktail, one of the most venerable, still survives on bar menus today.

This is a great “step up” from an Old Fashioned. I use the quotes because there is absolutely nothing wrong with the Old Fashioned — it’s perfect — so the only way in which you’re really stepping up is toward a cocktail with a little more complexity. There’s just more going on here, from the earthy maraschino to the aniseed pastis rinse. It’s really excellent.

I like to use a LOT of bitters in this. Six dashes or so. I’ve left the recipe at two because that’s more traditional, but I recommend giving my way a shot. 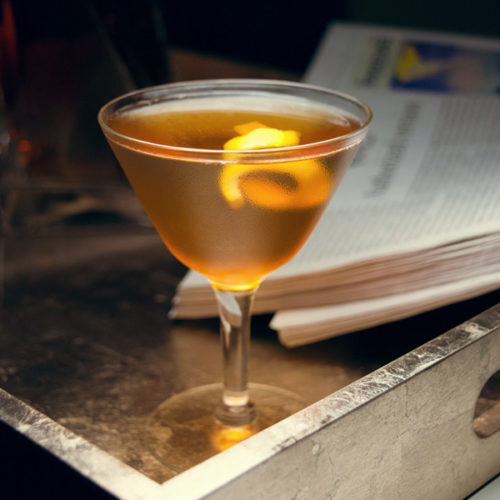 One of the original cocktails, the Improved Whiskey Cocktail is a classic drink perfect for any fan of the Old Fashioned.
Print Recipe Pin Recipe
Total Time 5 mins
Servings 1 cocktail

Cocktails & AlcoholIt’s Friday…Have a Drink
Lighten up your winter wardrobe.
Getting the perfect fit right off the rack is like winning the lottery. Whether you wear suits or selvedge denim, this guide demystifies the process of tailoring and alterations.
Discipline is a skill anyone can learn.
Did You Miss These?
Cleaning the clutter off of surfaces and emptying the dishes in the sink ain't enough.
Rediscovering what is work appropriate in a modern, more casual world.
A beginner's DIY project that looks like it cost hundreds of dollars.
Cutting through the confusion: A breakdown of common knife terminology.
You don't have to be a traumatized father fighting a fungi-based zombie apocalypse to wear this jacket.
We've researched the best men's winter coats, based on material composition, product rating, and price.
Life can be overwhelming - Here's a proven method used by fighter pilots to make smart decisions fast and stay on top of it all.
And how to build them in under 30 days.
Do these now to keep your style strong and simple.