We’ve decided to take a step back with this series and start highlighting some classic drinks – both common and lesser known – that can be easily ordered in a quality cocktail bar in addition to being something you can make at home. We’ll scale back a bit on recipes that bartenders won’t have heard of, and focus instead on things they should know, or at least be able to quickly look up.

To that end, let’s start with one of the platinum standards in cocktailing. The Gin Martini is a drink that has survived prohibition, a general anti-vermouth campaign from people with undeveloped palates, and an all-out assault by vodka in the second half of the 20th Century. Despite all of that, it’s still here, and actually regaining some of its popularity as more and more people discover that vodka is basically just boring gin.

Gin’s delicious. I covered it at length in Primer’s Great Gin Roundup, so I won’t go too far into it here except to explain that it’s a distilled liquor like vodka that’s given subtle flavor via various ‘botanicals’, most prominently the juniper berry. When mixed with a quantity of dry vermouth – white wine fortified with extra alcohol and flavored with its own set of botanicals – and perhaps a touch of bitters, and both chilled and diluted a bit by stirring with ice, it forms one of the world’s most perfect cocktails.

Any bartender, professional or amateur, worth his salt should know how to make a good martini. Hint: it never involves dumping olive juice into your drink. In fact, I would argue that a gin martini isn’t really suited to an olive garnish at all. A citrus twist works much better and helps bring out the slight sweetness of the vermouth.

Don’t be afraid to tell a bartender how much vermouth you want, either. These days most of them err on the side of “dry to very dry” … I’ve visited restaurants where my “martini” was a glass of slightly-watered gin. That’s nice I suppose if you’re just looking to get tanked, but if you want to experience real, delicious elegance in a glass, try the recipe below.

Oh, and I’ve noted it before, but it’s essential that you store your vermouth in the fridge, and that you work through it within about a month or so. It won’t poison you if you leave it warm, even for long periods of time, but the vermouth will oxidize and taste like garbage. Do yourself a favor: get a 375ml bottle instead of a 750ml, keep it cold, and replace it often. At $6 a pop for something as highly drinkable as Noilly Prat, it’s not even a big deal if you don’t make it through the whole thing in time. 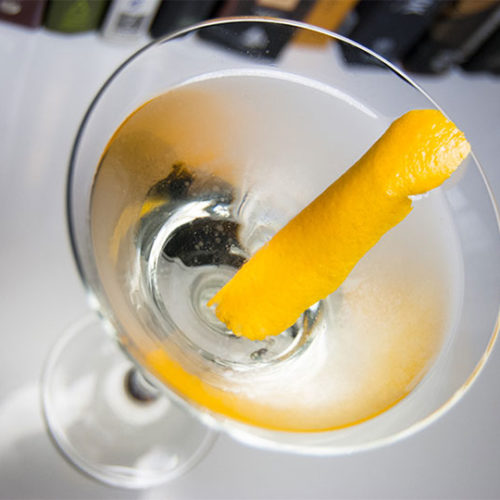 Cocktails & AlcoholIt’s Friday…Have a Drink
Be the talk of the town (or at least the watercooler) with one of these perfect gift swap ideas.
Bundling up doesn't end at your wrists.
Bring your body and mind back into a relaxed state.
Did You Miss These?
Many guys don't think they can be an "alpha male" because they're not arrogant jerks. There is another way.
Answering your questions, man to man.
Getting back to the body you want begins between your ears.
There’s no time like the present to check some names off your gift list.
Your kids need you; your phone doesn’t.
The last hurrah of the Black Friday sales weekend.
Black Friday is here. And we've put in some serious time distilling what's worth shopping and what's worth skipping.
Save on gifts and stock up on essentials.
Cigars are best enjoyed socially - here’s our crash course on how to build the best experience.