It’s taken me a while to come around to loving fortified wines. I started exploring cocktails during the tail end of the “everything is a martini” era, and even when I moved to only drinking martinis that were actually martinis, I tended toward the no-vermouth side of things for a long while. It wasn’t until 2006 that I started checking out classic cocktails, and the obsession didn’t bloom in earnest until 2009 or so (it’s steadily grown since then).

Fortified wines are a unique ingredient in that they’re generally subtle — at least compared to many liqueurs, amaros, and the like — and yet they can really take over a drink. For a while this didn’t really work for me, and I have to admit, I still like my martinis on the dry side. But I’ve started really getting into other drinks that feature fortified wines heavily, sometimes even as the star.

Gin’s still the star in this cocktail, but it doesn’t mask the Dubonnet, which is nice. Not technically a vermouth, historically speaking, Dubonnet Rouge is actually a member of the same family as Bonal, Lilet Blanc, and others — quinquinas. These can easily be subbed for vermouth in most recipes, however, since they’re all similar fortified wines.

It’s less bitter than any other quinquina I’ve ever had, though, and the red wine base seems to shine through a lot. Here it matches very nicely with the cherry of the kirschwasser and the botanicals of the gin to make something that’s reminiscent of — but quite different from — a Martinez.

Standard disclaimer with this and all fortified wine drinks: if your vermouth (or quinquina) isn’t fresh, the drink’s not going to taste very good. Fortified wine doesn’t go bad, exactly, but it oxidizes pretty rapidly once you open the bottle. I try to buy mine in half-size, 375 ML bottles in order to get through them quickly. I also store them in the fridge. You can get a couple of months out of something strong and sweet, but anything light like a dry vermouth is going to taste noticeably different after a month or so. 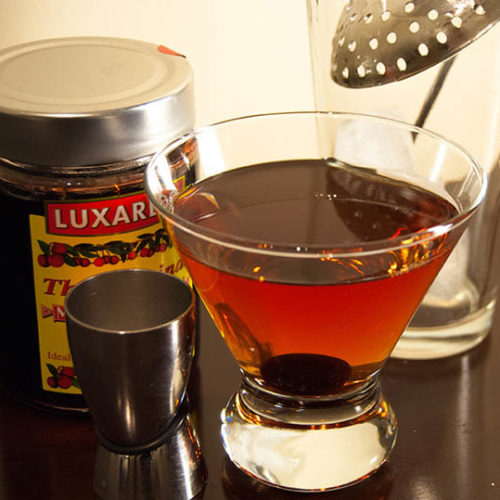 Cocktails & AlcoholIt’s Friday…Have a Drink
Great, dressier summer style at an attractive price.
Summer Wedding ✓Office ✓ Looking like Model ✓
Look forward to dressing sharp when it's sweltering.
Did You Miss These?
Rediscovering what is work appropriate in a modern, more casual world.
The single best fashion tip for dressing better: how to incorporate smart casual outfits and elements into your wardrobe so that you’re the best dressed guy – wherever you go.
Serve drinks that don’t taste like paint thinner without breaking the bank
To master your life, you have to master yourself first.
Simple and very effective.
Add a new option to your rotation.
The best Father's Day gifts (that aren't a "#1 Dad" mug).
When you find a staple that works for you, upgrade to a version that features unique design details, premium materials, or sustainable construction.
Let's do summer on purpose.