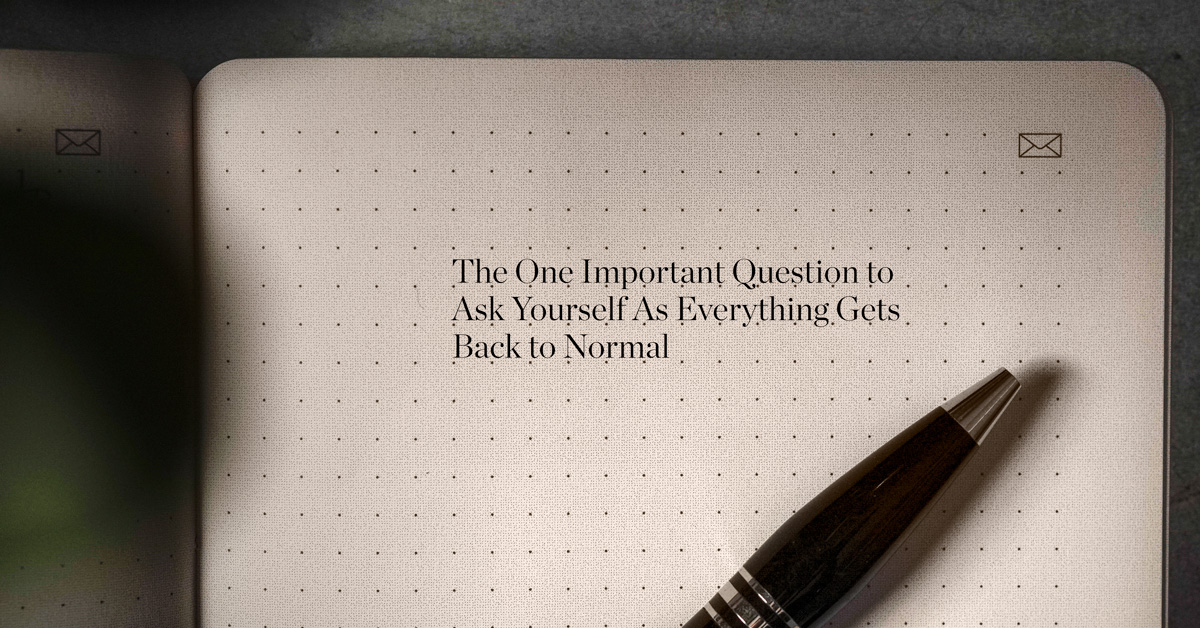 I was daydreaming the other day…I don't think most of us really acknowledge just how crazy the last year has been. Sure, our daily lives have been consumed by the news…the bad news, the conflicting news, the improving news. Our work life has completely shifted and for some slammed to a stop. We haven't seen 70%+ of the people we care about that we would normally see in that time. We've lost loved ones. Week after week, month after month. We kept going and adapting.

And when I say that, you're probably like, “yeah bro, I KNOW it's been a crazy year.” But what I was thinking about was more on the macro scale. Like, for as crazy as a time as it was to live through the period after 9/11, the effects of the last year have been like that exponentially.

We're now emerging from the other side of a once-in-a-hundred-years global event. Regardless of who you are, the social and economic changes of the last year have touched all of us in some way. The required adaptation means that we're all different than who we were on February 1, 2020.

And as our country reawakens there will be a collective desire to return to “normalcy”.

Therein lies one of the greatest and rarest opportunities we'll ever be given.

With such emotional distance from a year ago, we can more clearly see how we've changed and we get to decide, in this moment, what we don't want to go back to.

For me, I had this realization last week that, for over a year thanks to quarantine, I haven't had to make up a lie to get out of an invitation for something I didn't want to do.

See, I grew up with that wonderful personality trifecta of introversion, social anxiety, and people-pleasing. If I get invited to do something, especially by a person I generally like, I feel like I can't decline it unless I have a scheduling conflict. And when I don't, well, it can be annoyingly stressful as I do the dance of finding a way to decline without just expressing appreciation and saying no.

Which is obviously crazy. I don't need a reason to not want to do something. I don't have to have other plans to not feel guilty for telling someone I can't join them. Being tired, wanting a TV binge day, working on a solo project – or literally any other thing you can think of – is a perfectly good reason to not do something.

The trouble is, I've got this story going around the train tracks in my mind that if you decline someone's outreach you might get one more before they stop asking. And then the responsibility becomes mine to reciprocate the invitation. If I don't do that? People start fading out of your life. As a guy who works too much and recharges in solitude, there's an anxiety that I'll never be able to reciprocate, and so I will be losing these people and experiences from my life. It's operating from a place of scarcity.

So I realized, as the world gets back to normal…and more likely some sugar-fueled version of itself until we collectively get it out of our system…I don't want to have to stress and fib about not wanting to do something. I want to engage more authentically in the world and graciously and honestly accept or decline things that come up based on what I actually feel like doing.

We're in this weird paradox phase where everyone wants it to go back to normal while also not going back to how it was.

This week, I invite you to set aside some journal time, just 10 minutes will do, and ask yourself, “How have I changed in the last year, and what parts of me do I not want to sink back into?“

There will never be an easier time to reinvent yourself than right now.

Self-Development
Great, dressier summer style at an attractive price.
Summer Wedding ✓Office ✓ Looking like Model ✓
Look forward to dressing sharp when it's sweltering.
Did You Miss These?
Some of your staples may be acting as double agents.
Sometimes it pays to pay a little more.
Wool ties have become very popular, and for good reason. But try to tie one on with a semi-spread collar and you'll find our standard knots don't get the job done. Enter: The Nicky tie knot.
To master your life, you have to master yourself first.
Simple and very effective.
Add a new option to your rotation.
The best Father's Day gifts (that aren't a "#1 Dad" mug).
When you find a staple that works for you, upgrade to a version that features unique design details, premium materials, or sustainable construction.
Let's do summer on purpose.