The Other (Affordable) Moon Watch

Looking for an Omega Speedmaster alternative? There just happens to be a second watch worn on the moon.

You don’t have to be an aficionado of NASA and space travel to understand the significance of the Speedmaster Moonwatch Professional Chronograph. Having been strapped to the wrists of Apollo 11 crewmembers Armstrong, Collins, and Aldrin in 1969, the Speedmaster became a legend. Aldrin’s Speedmaster ST105.012, interestingly enough, was the first watch to touch down on the Moon’s surface since Armstrong had left his on the lunar module as a backup timer. The Speedmaster is now easily one of the most recognizable timepieces in the horological world. Too bad for Rolex, Hamilton, and Longines, who submitted their models for space flight consideration and lost out to Omega.

The Speedmaster’s stainless steel case, matte black dial with triple-register chronograph subdials, domed Hésalite crystal, white sword hands, black tachymeter external bezel, and the polished and brushed bracelet come together for truly versatile wearability. The design of the dial, hands, and markers made it very legible, as well as fodder for its classic status. The watch’s crisp but sophisticated look can be recognized from a distance, and it has only become more respected and coveted over time.

What most folks don’t know is that one other iconic watch made an Apollo lunar mission, and its existence should make watch and space lovers stand up at attention. The Bulova Lunar Pilot Chronograph made its moon landing on August 2, 1971, and its introduction into the space program was quite the back-door entry and makes for a truly fascinating story.

The Bulova brand submitted supposedly largely American-crafted timepieces for space mission consideration. The 16 Bulova watches submitted for review to NASA actually came from Bulova-owned Swiss watchmaker Universal Genève because Bulova didn’t have a chronograph movement of their own. When the program required its timepieces to be 51% American-made, this would turn out to be a problem in the investigation and final decision-making.

The watches provided were heavily modified to look similar to the Speedmaster with its easy legibility and visual appeal, also based on NASA mission specifications. The black dial with white sword hands were nearly identical to the Omega watch, but the tachymeter bezel ring was moved internally under the acrylic crystal as compared to the Speedmaster, and the pushers were long and contoured versus the standard pushers on the Omega. Like the Speedmaster, it also had a hand-wound movement, the Swiss Valjoux 72. Bulova (American-owned, at that time) hoped to qualify for the program based on its ownership laurels, but it was not to be since it was found that the Lunar Pilot Chronograph prototypes were mostly of Swiss origin.

Despite the controversy that American astronauts should wear American-made products, it turns out that the Swiss Omega company had actually built a more American watch with its U.S.-sourced case and crystal. The Apollo 15 Skylab mission stayed with the Speedmaster, and it’s assumed that Bulova gifted an unofficial prototype Lunar Pilot Chronograph to Astronaut David Scott.

Scott wore it on his third excursion after the acrylic crystal on his Speedmaster popped off during the second outing and separated from the watch case, rendering it unusable. Scott broke out the Bulova as a backup watch, and he wore the Lunar Pilot for the remainder of the mission. 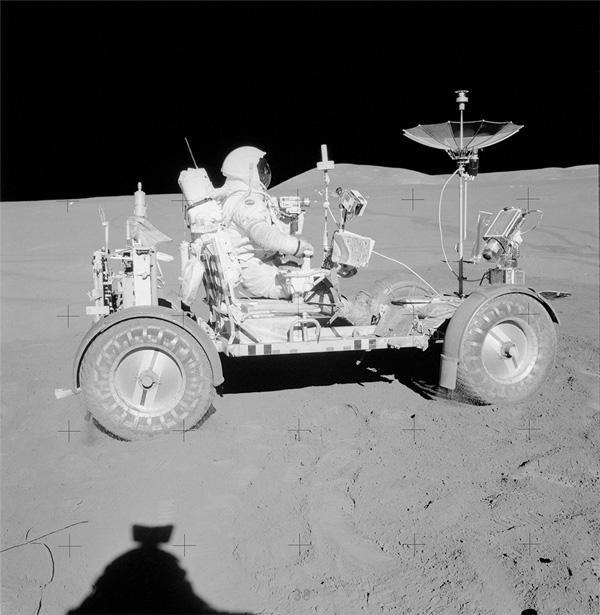 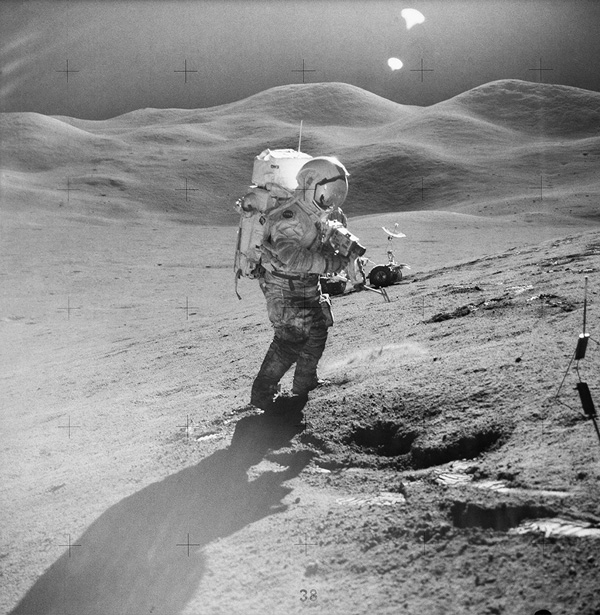 Scott using a 70mm camera on the lunar surface

The watches provided were heavily modified to look similar to the Speedmaster with its easy legibility and visual appeal, also based on NASA mission specifications. The black dial with white sword hands were nearly identical to the Omega watch, but the tachymeter bezel ring was moved internally under the acrylic crystal as compared to the Speedmaster, and the pushers were long and contoured versus the standard pushers on the Omega. Like the Speedmaster, it also had a hand-wound movement, the Swiss Valjoux 72. Bulova (American-owned, at that time) hoped to qualify for the program based on its ownership laurels, but it was not to be since it was found that the Lunar Pilot Chronograph prototypes were mostly of Swiss origin. 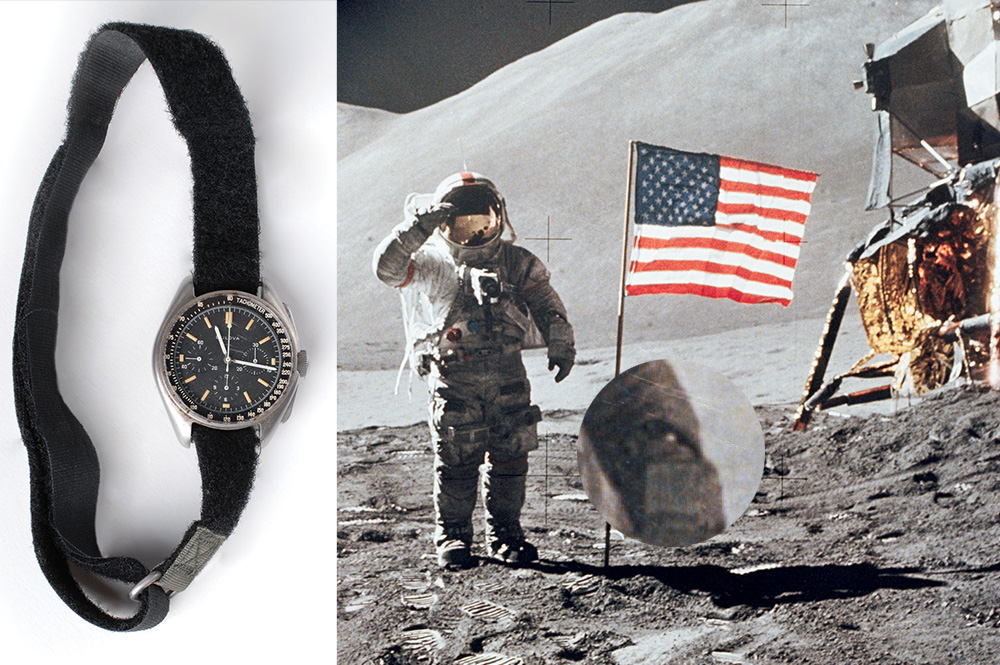 It was deemed by NASA as an “unauthorized timepiece”, but via unplanned circumstances, Bulova took its place in the annals of space travel and timekeeping. Once the mission was over, Scott held onto his Bulova for 44 years before parting with it at auction, where it sold for an astounding $1.6 million in 2015. The Omegas worn by the astronauts were, and remain to be, government property living in the Smithsonian and unavailable for auction.

The Bulova brand was acquired by Japan-owned Citizen Watch Co., Ltd. in 2008. Bulova has since made a modern version based on the original Lunar Pilot Chronograph, and it’s as appealing as you’d imagine with a price tag that brings history, quality, and Speedmaster looks without the shock and awe. Released in 2016, the new Lunar Pilot Chronograph received a 262 kHz super high frequency quartz movement that loses only about 10 seconds of timekeeping per year, whereas hand-wound mechanical and automatic movements are less accurate due to environmental circumstances and wear-and-tear on the components.

The new Lunar Pilot also benefits from highly scratch-resistant sapphire glass, whose toughness more than adequately partners with the quartz movement’s resistance to shock. Additionally, it qualifies as one of the best budget watches for its tremendously affordable asking price. The one blemish on the watch’s reputation lies in the fact that shortly after the auction of Scott’s watch, Bulova and Kay Jewelers were sued by Scott for misappropriation of his name for commercial purposes. Bulova later removed Scott’s name from any materials related to the Lunar Pilot but still made reference to Apollo 15 and its “mission commander”.

The modern Lunar Pilot Chronograph is currently $225 off in Amazon's Big Style Sale (see our other picks here), and it can be shorn on OEM Bulova leather and nylon straps (50% off currently), as well as a solid-stainless steel link bracelet. Thankfully, its NASA space program aesthetic looks great on just about any quality watch strap, and it can easily pair with casual wear for a night out with the boys to under the sleeve of a full-on James Bond-style suit for high-style that’s still practical. 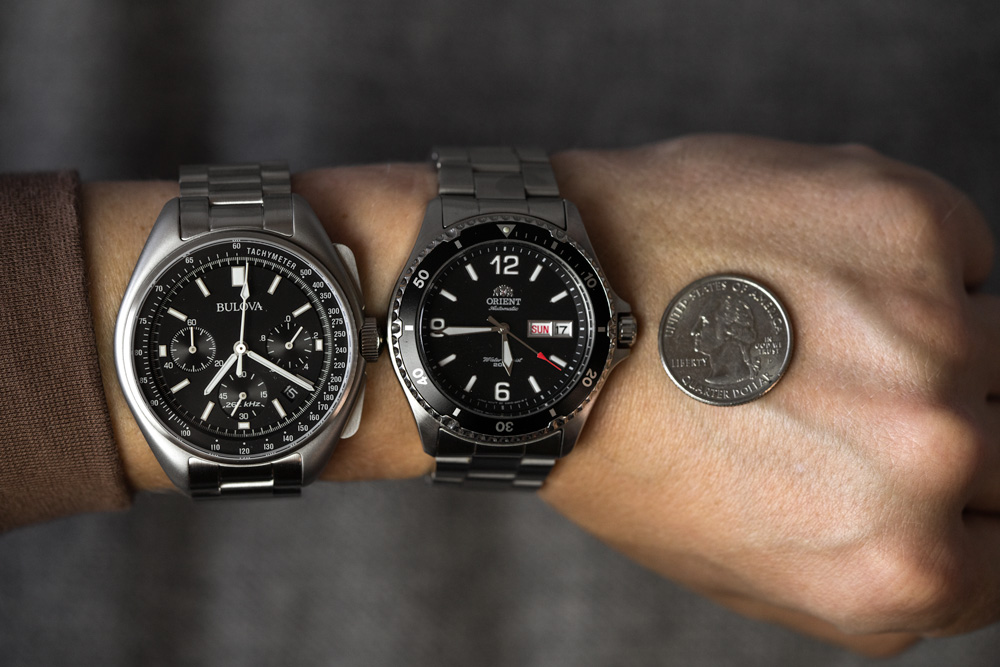 If you happen to come across someone who recognizes the watch’s significance while you’re wearing it, it’ll surely generate some interesting conversation. If not, it’s just the kind of timepiece that will still get plenty of attention, even if you’re not an astronaut.

Pick up a Bulova Lunar Pilot, currently 33% off with the metal bracelet and 50% off for the nylon

StyleWatches
With 15 outfit examples to get you started.
Lighten up your winter wardrobe.
Getting the perfect fit right off the rack is like winning the lottery. Whether you wear suits or selvedge denim, this guide demystifies the process of tailoring and alterations.
Did You Miss These?
No luggage fees, no wrinkles, more stuff. Learn how to properly pack a suitcase.
Finally! Here is a woman to set us straight on what we're doing wrong when we talk to them. A guest post from communication coach Katrina Razavi.
Work-cations combine the best things about vacation with your most productive times at home. Primer's complete guide to the Why, How, and Where.
Discipline is a skill anyone can learn.
Cutting through the confusion: A breakdown of common knife terminology.
You don't have to be a traumatized father fighting a fungi-based zombie apocalypse to wear this jacket.
We've researched the best men's winter coats, based on material composition, product rating, and price.
Life can be overwhelming - Here's a proven method used by fighter pilots to make smart decisions fast and stay on top of it all.
And how to build them in under 30 days.