Miss Eating Out? Make the Best Steak at Home with the Reverse Sear Method

Miss Eating Out?
Make the Best Steak at Home
with the Reverse Sear Method

Start using science to get a consistent doneness and a delicious sear, with this method employed by top restaurants – no fancy gadgets required. 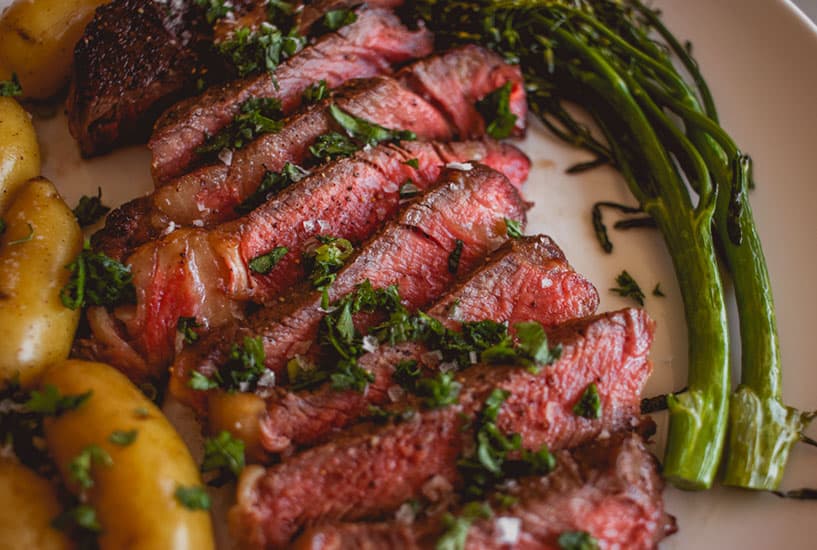 The last steak I cooked didn’t go as planned.

It was date night and I picked out the best New York Strip steak my grocery store had to offer. Was this the best choice? I wasn’t sure because I don’t know meat as well as I should.

After seasoning, I pan fried the steak, careful to turn it just once to minimize moisture loss, and performed The Finger Test for doneness. I was shooting for medium; it came out so overdone I could’ve used it for shoe leather. I panicked, grabbed a bell pepper, and improvised steak fajitas for my wife. She loved it, though probably not for the right reasons (“Look! He made something, even if my jaw is fatigued from gnawing!”). That was over a year ago.

More recently, I learned of a technique for preparing meat perfectly, every time, without fail. No more unevenly cooked cuts, done to the center on one side and dripping blood on the other. No more hockey pucks. I was interested, but skeptical. Isn’t a big part of the reason people pay upwards of $50 a steak at high end steakhouses because they’re cooked to perfection? And doesn’t that mean perfection is a special, inaccessible skill?

As it turns out you can prepare reliably perfect steak, no secret initiation required, using a method called the reverse sear.

“The last 10 years a lot of professional kitchens have switched to reverse searing because they’re seeing a more consistent product,” says David Gaus, TV personality, chef, restaurateur in Washington, DC, and host and co-judge of Travel Channel’s American Grilled. “With reverse sear, you get the same desirable qualities of a traditional hard sear and oven finish – the crust and juiciness – but you have more control.”  David’s been cooking steak since he was 9 years old, starting off on a backyard grill with his dad and eventually learning methods used on the line at high end restaurants.

Perhaps more than any other food, the preparation of meat is clouded in folklore, misinformation, and myth. “The culture of grilling is like a sport, and like sports there’s a lot of superstition,” says David. “People pick up what they know and don’t question it.” Take my last date night attempt: First, I learned turning steak or burgers often was a no-no. In fact, frequent turning helps ensure an even doneness and has little impact on moisture. Next, I poked my steak to check for doneness, which is not an accurate indicator of anything due to the sheer number of uncontrolled variables (meat density, fat content, and thickness, the difference in hand squishiness, etc). Finally, I scorched my steak on high heat looking for the all-important sear and the result was over-done and gray.

The question is, why learn another method? You may already know how to cook a good steak. I put this question to David and he says, simply, “Consistency.” As you’ll discover, the science of the reverse sear puts the control squarely in your hands. If you want a perfect medium-rare steak time after time, read on.

A good hard sear is at the heart of grilling lore. Give your steak a hard sear, the thinking goes, and it locks in the juices. The only problem with this approach is – that simply isn’t true. Scientifically, there’s no such thing as sealing in moisture. While grilling imparts smoke and searing makes a delicious crust, the high heat of a grill actually dehydrates meat.

So how do you solve this problem? The simple answer is cook your steak on low heat in an oven, minimize moisture loss, and presto – you’ve got juicy steak every time. The problem is, you lose the crust and textural qualities searing imparts. 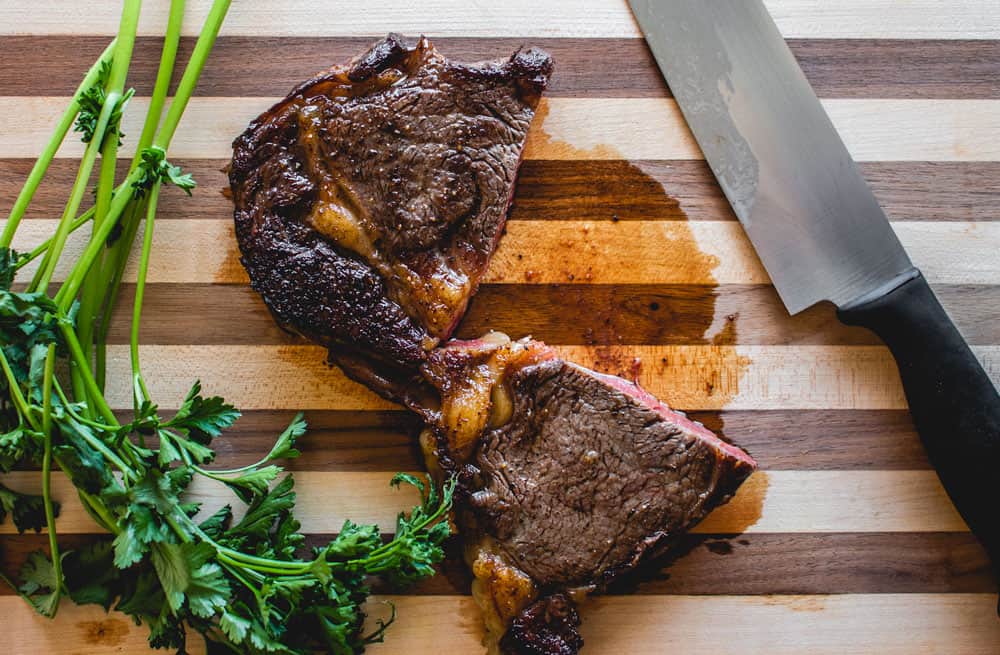 The logic is simple: cook your steak to just about its desired doneness in the oven and then finish it, ideally, in a cast-iron pan. “It’s proven that reverse searing actually retains more of the cut’s juice,” says David, “and you still get the caramelization and crust.”

The science of the reverse sear is compelling. Consider the fact that glowing coals or electrical heating elements easily reach 2,000 degrees Fahrenheit; a gas flame is about 3,000. The walls of an oven, on the other hand, don’t get much hotter than 500 degrees. As explained by Harold McGee in the Bible of culinary science On Food and Cooking, “The amount of energy radiated by a hot object is proportional to the fourth power of the absolute temperature, so that a coal or metal rod at 2,000 is radiating more than 40 times as much energy as the equivalent area of oven wall at 500 degrees”

In other words, the energy actually cooking your food rises exponentially with temperature. At a high temp, all that energy makes it easy to brown the outside of meat but it means the rate of heating inside your steak is radically different than the rate on the outside. That’s why it’s so easy to end up with a steak that’s charred on the exterior and cold at the center, and mismanaging heat in relation to a specific cut is why my attempt at steak went so poorly.

The genius of the reverse sear is you position the steak in relation to the heat source so the rate of browning and the rate of inner heat conduction are well matched. That enables you to predict, with laser-like accuracy, when to pull the cut and finish it with a strong sear to trigger the Maillard reactions – chemical reactions that release hundreds of individual flavor compounds – that make a good crusty steak irresistible.

“A lot of people have adopted it because it’s a proven better technique,” says David. And the fact that the reverse sear technique has emerged in the last 10 years is truly unique. David continues, “It’s kind of unheard of to debunk something in the kitchen these days because we’ve been cooking for so long, so when something revolutionary in the kitchen comes along that’s pretty cool.”

How to Reverse Sear a Steak: The Steps

Cooking a great steak starts with a great steak. Paying a little more for a tender cut from quality meat will pay off more than any cooking method. This 1lb grass-fed ribeye is from a butcher shop in Los Angeles.

1. Start with a Good Steak

It all begins with your cut selection. In general, you want steaks at least 1” thick. Any thinner and you start to lose the benefits the oven confers. “A strip steak or bone-in, cowboy cut ribeye are good bets,” says David. “You’ve got more protein to get through, so it lends itself to the reverse sear method.” Whenever budget permits, dry aged steaks are ideal.

Never cook your meat cold from the fridge. Temper it by resting at room temp at least 30 minutes.

Preheat your oven to 275 Fahrenheit. 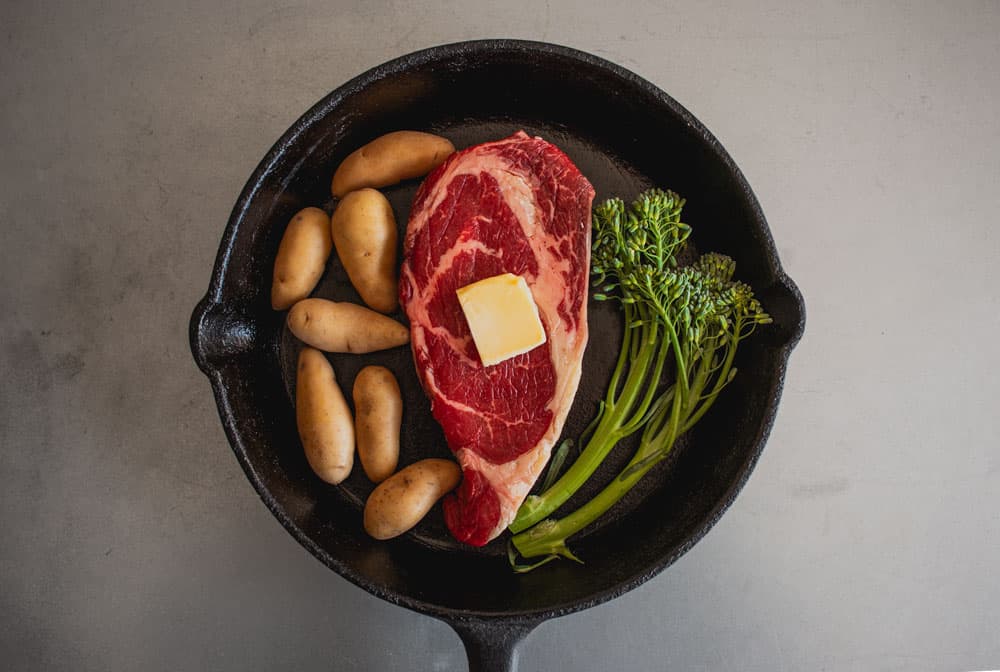 Season liberally with salt and pepper. Place in pan. Optional: Add a pat of butter.

David warns, “Don’t use wet fingers when you season – half the salt is still on your hands! You’re strategically placing that seasoning on a piece of protein, do it with care.” He also has a pet peeve from years in the business: “You see a lot of cooks mixing salt and pepper – that’s the worst thing you can do. Steaks don’t require the same amount!”

Place your seasoned steaks on a rack in a baking tray or oven-safe pan. Use foil to minimize clean up.

Put in the oven and cook for 30-50 minutes, until your steak reaches your preferred internal temperature. A thermometer makes this easier. Primer's founder Andrew loves to use a wireless thermometer intended for grilling like this one when he reverse sears. 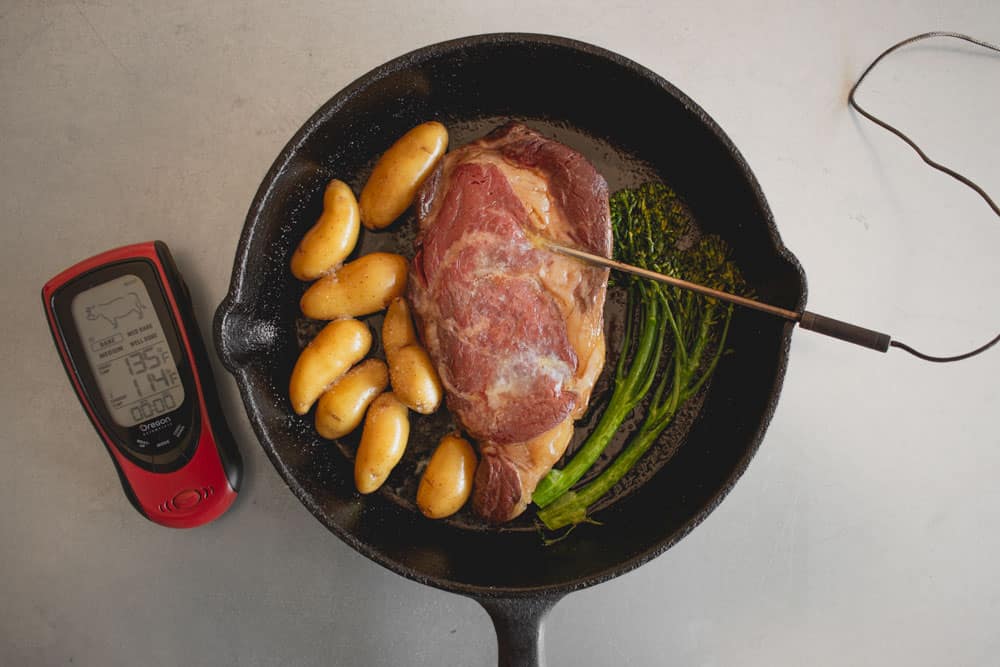 Remove the steaks just before they’ve reached the desired temp. Resist the urge to cut into them – this is what loses precious juices.

While resting, preheat a pan or cast iron skillet til it’s smoking hot. Sear your steaks for one minute per side and serve straight away.

Plate the steak and vegetables and top with chopped parsley, cilantro, and chives. One of the biggest mistakes home chefs make is under-salting their food. Flake salt is available at your grocery store and enhances the flavor so much you'll wonder how you ever cooked without it. Sprinkle some on top of the steak and vegetables. 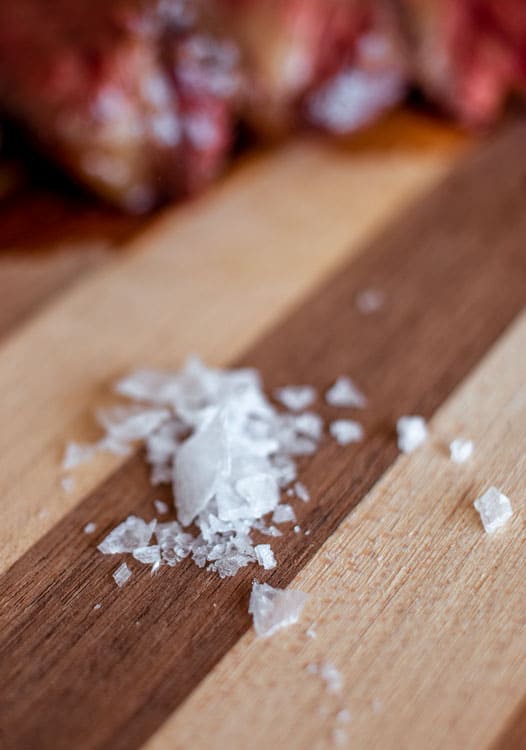 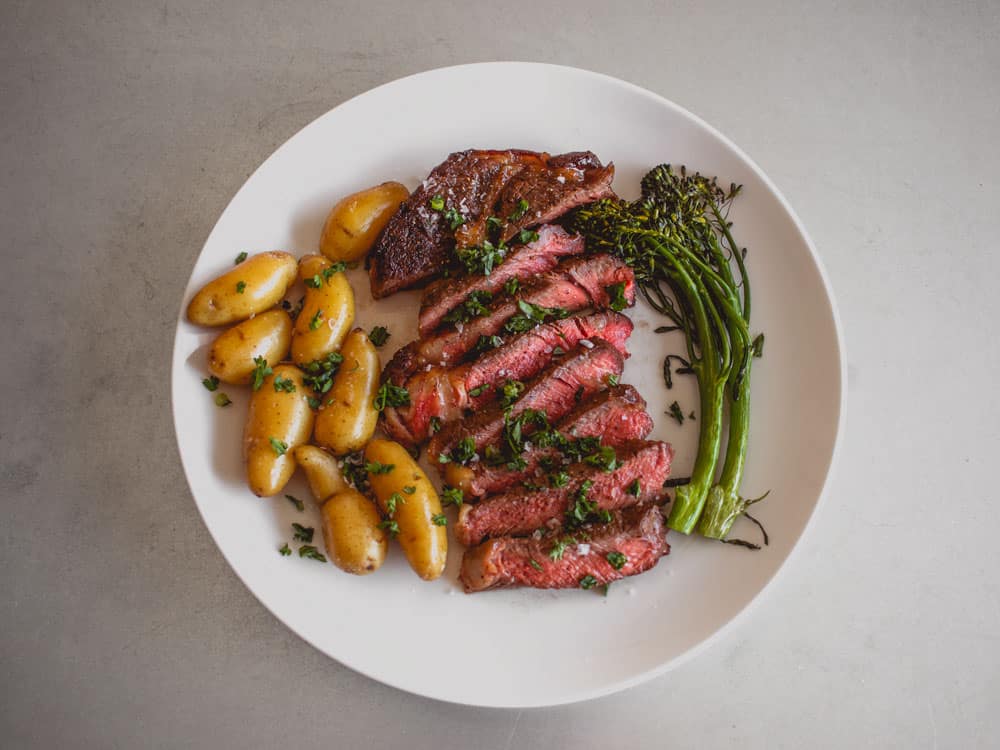 Food & CookingHow-to'sThe Best Life
Just in time for heavy winter weather, pick up new coats, jackets, and sweaters at off-season prices.
Be the talk of the town (or at least the watercooler) with one of these perfect gift swap ideas.
Bundling up doesn't end at your wrists.
Did You Miss These?
Cohabitation is a a big step, but if you go in with the right mindset, the transition can be seamless.
Focus on being happy, just for today. Then do it again tomorrow.
The single best fashion tip for dressing better: how to incorporate smart casual outfits and elements into your wardrobe so that you’re the best dressed guy – wherever you go.
Bring your body and mind back into a relaxed state.
There’s no time like the present to check some names off your gift list.
Your kids need you; your phone doesn’t.
The last hurrah of the Black Friday sales weekend.
Black Friday is here. And we've put in some serious time distilling what's worth shopping and what's worth skipping.
Save on gifts and stock up on essentials.