If growing a great beard was as simple as never shaving, wouldn't every guy have one?
30 March,2022By Stillman Brown
This post may contain affiliate links, read about our editorial promise 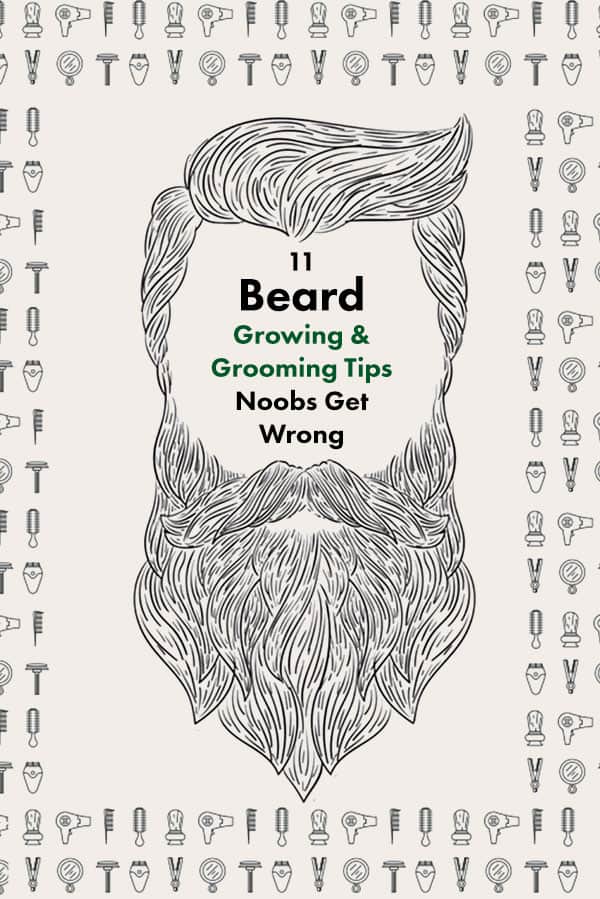 Growing a beard for the first time can be a bit like asking out your crush: everybody’s got an opinion about the best way to do it and the stakes feel super high.

With a beard, the stakes are high… get it wrong and you have to start over, or walk around with a funny-looking face.

Luckily, brave souls have gone before you. We’ve canvassed the internet and asked Primer contributor (and be-whiskered gent) Shane Martin for the top mistakes guys make when trying to grow a beard.

1. Not Brushing Your Beard

If you’re like me, you can’t remember the last time you combed your hair. I actually have combs built into my body: my hands. Don’t make the same mistake with your beard, however, as regular brushing is actually super important.

First, brushing your beard helps train it to grow how you want. Then there’s dandruff – just like with your hair, beards get dandruff and regular brushing can help remove and prevent it. Finally, brushing distributes oil – both beard oil and your body’s natural product – thereby moisturizing your face fur.

Shane recommends starting with a comb for shorter beards and progressing to a brush when it gets fuller and longer. Learn more about the importance of beard brushing, and pick up a boars hair beard brush from Beardbrand. 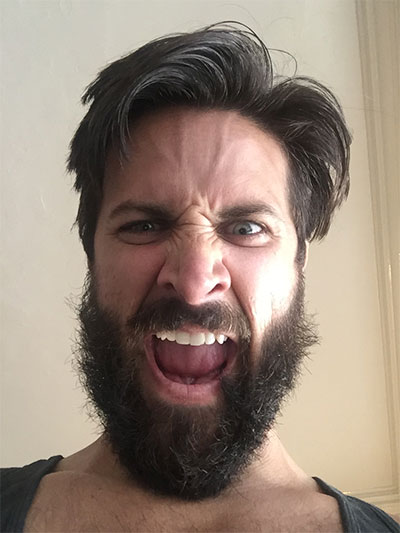 It’s such popular knowledge that I believed this one until doing the research. It turns out that shaving too often can actually make it harder to start a beard and that hair growth is mostly down to genetics. Some studies indicate that diet can also play a role.

For those looking for the nitty-gritty research, Tools Of Men has a great takedown of this myth.

3. Skimping On A Trimmer

As you’ve probably intuited by now, having a beard is kind of a lifestyle. It involves daily grooming, upkeep with different products, weekly trimming, and plenty of trial-and-error learning. If you’re trying to do all of that using a cheap-o trimmer with a laughably small battery that tugs at your face, that lifestyle will be one of annoyance instead of pleasure and pride. 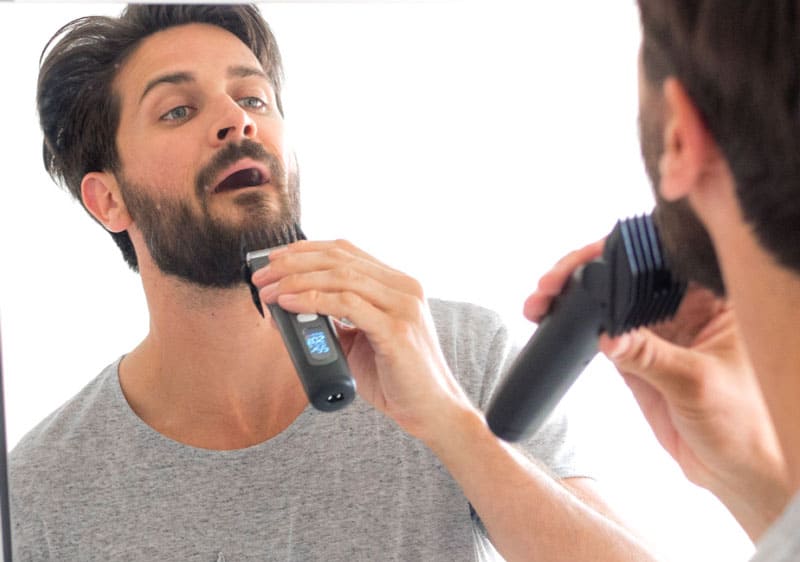 Shane reports that he trims his beard every 7-10 days and – before discovering the Brio Beardscape – replaced trimmers every 7-12 months on average. That’s an insane rate of turnover that speaks to the poor build quality of many consumer beard trimmers.

The Beardscape solves this issue with an oversized battery that delivers power for weeks, meaning you don’t have to worry about charging after each use. If you’re going on the road for business or fun, it also means not having to bring the charging base – handy if you travel frequently for work and every cubic inch in your carry-on is premium real estate.

For Shane, this trimmer was kind of a godsend. First, it addressed his previous issues with reliability and build quality. The Beardscape uses a ceramic blade that stays sharp and lasts longer than a traditional stainless steel blade. Ceramic is also low friction, resulting in less vibration translating into your hand, less wear-and-tear on the trimmer motor, and much more longevity. 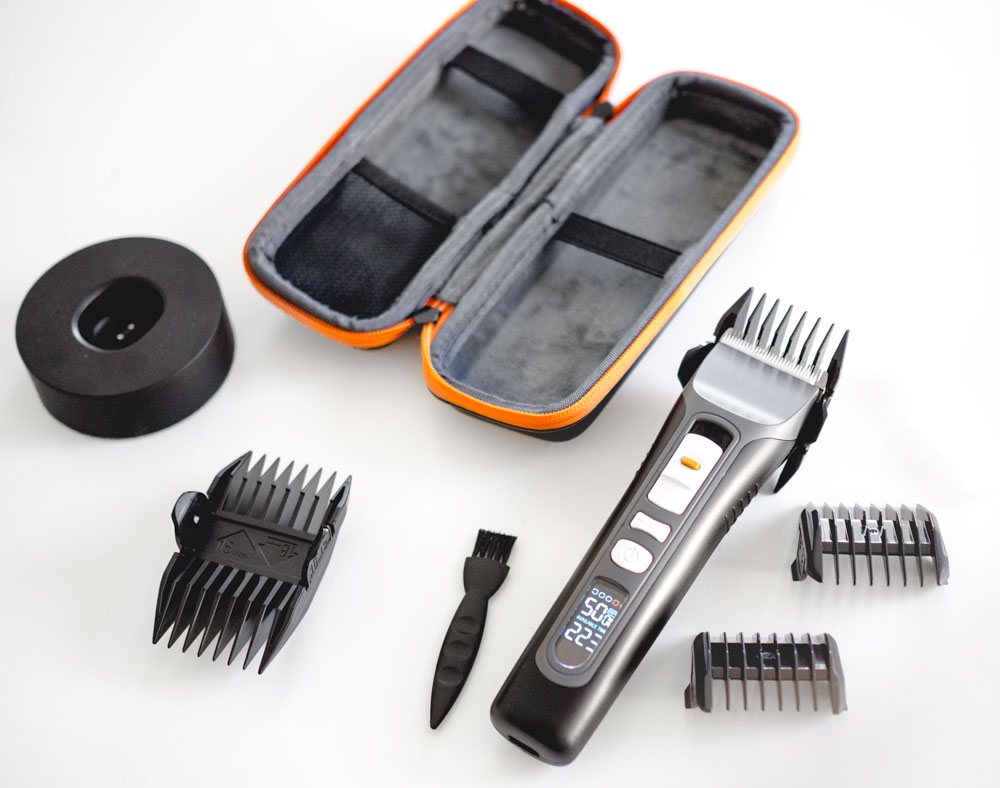 Brio Beardscape has a 4.5 star rating on Amazon

Start with the right tool, and you’re more likely to see the job through. Primer readers get an exclusive discount making it cheaper than Amazon.

4. Shaving Too High On The Neckline

It’s common for new beard owners to worry about tidiness. The risk, however, is that you overdo your grooming and shave too high on the neckline. The result simply looks… off. 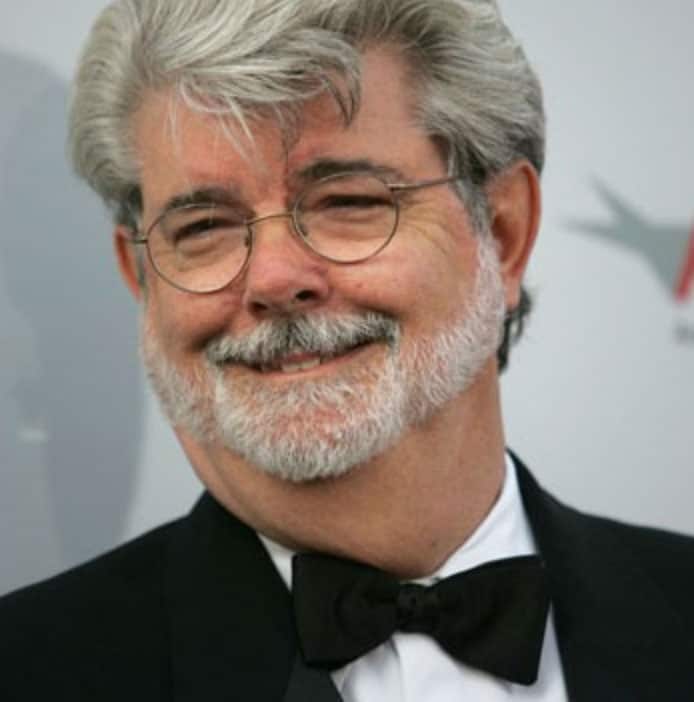 Here’s a handy rule to avoid shaving too high: imagine a line that runs between your ears, passing underneath your chin in a U shape. Everything forward of this line is “in.” Everything behind the line should be trimmed. If you’re still not sure, Shane recommends a trip to your barber. Have them help you out the first time – once you have a sense of what’s right, it’s much easier to duplicate on your own. 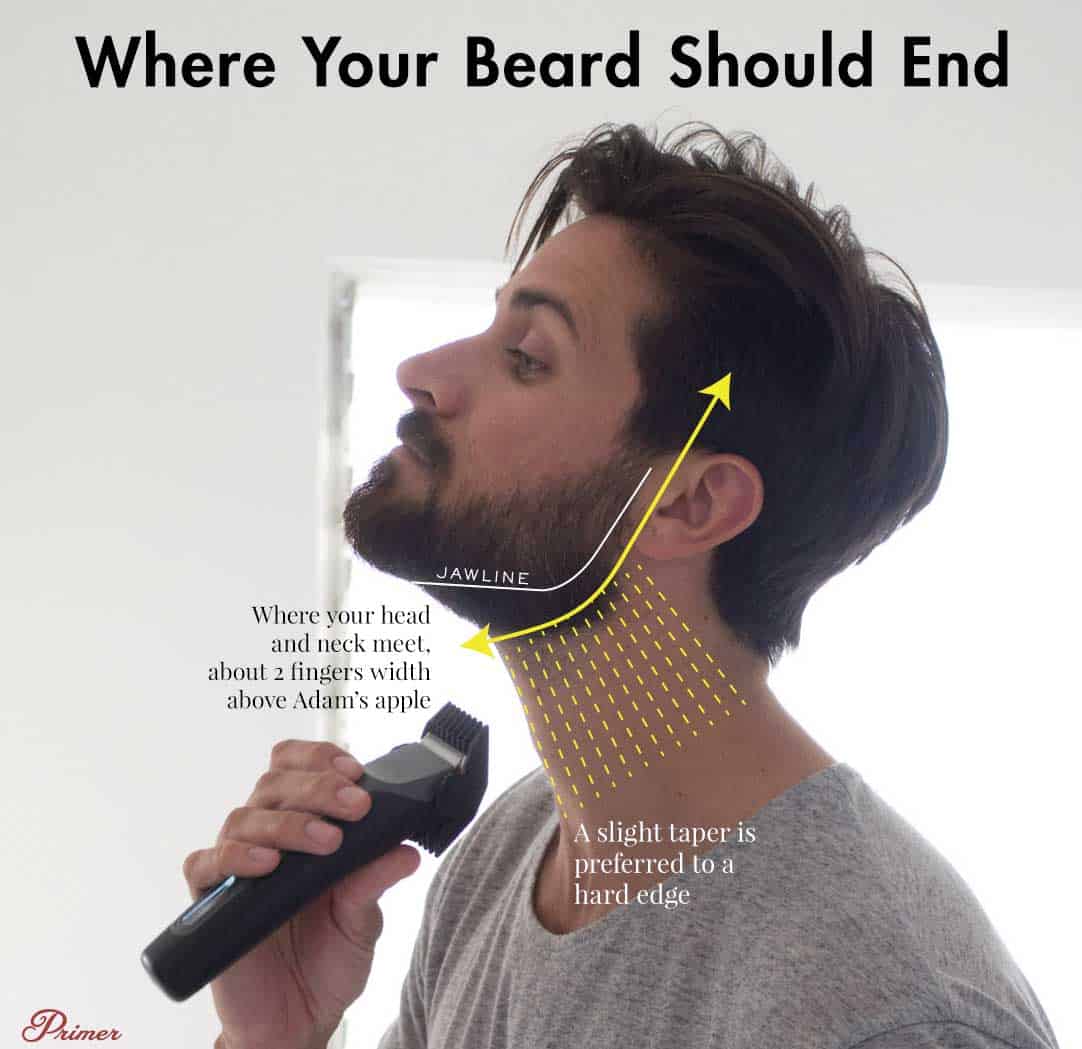 5. Ignoring or Over-trimming Your Mustache

Bonnie & Clyde. Han & Chewie. Zorro & Bernardo. Your beard and your ‘stache are partners in crime on your face and one of the most rookie moves is to nurture your beard and ignore your lip brush.

An untidy mustache can ruin an otherwise excellent beard. Similarly, over trimming your mustache can unbalance your look. Beard and mustache should appear to be the same fullness, regardless of the length you choose for each. “Appear” is the keyword here – often, beard and mustache will have different body or volume. As a result, you’ll need to use a different guide for each.

6. Letting Your Whole Beard Grow At The Same Rate

We see a lot of guys with gross beards. Some parts are really long, others way too short. That’s because different parts of your face can grow at different rates; or because of more fullness in certain spots appear like it’s growing faster than other spots.

During his bodybuilding competition days, Arnold Schwarzenegger famously would analyze his body in the mirror to see how different muscles were contributing to his overall shape, and then choosing to build, or ignore, certain ones to improve that shape. Your beard is the same: It’s a final sculpture made of various parts that aren’t the same fullness and length. Analyze the overall shape of your beard and how it’s altering your face, and trim certain areas accordingly. As Shane explained his own process, your beard can noticeably alter the shape of your jawline and face as a whole. 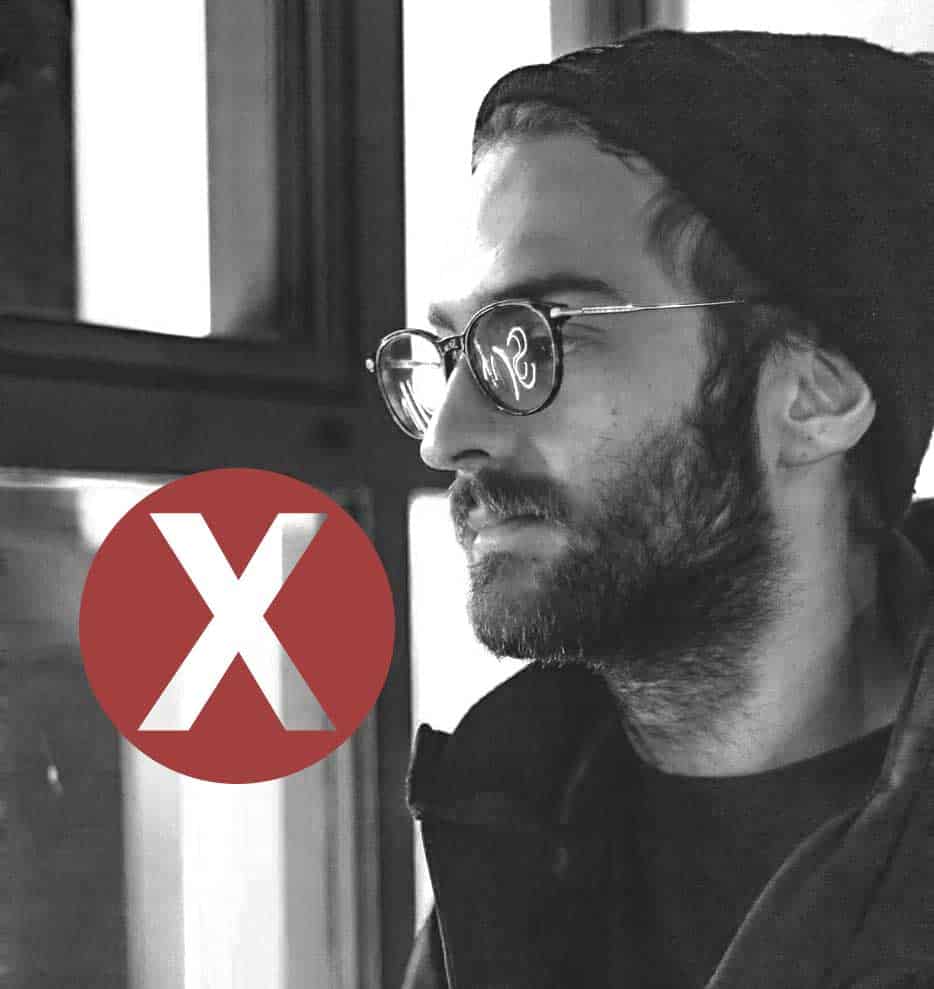 7. Not Giving It Enough Time

An informal survey around the office confirms the online consensus: most beards take 2+ months to get going. For some, it’s much less. My buddy Pete can go from clean-shaven to a short beard most men would envy in a week. Myself – I couldn’t grow a beard to save my life. It just depends.

If you’re serious about growing a beard, don’t get discouraged. Shane has been tweaking, changing, and polishing his for 10 years. 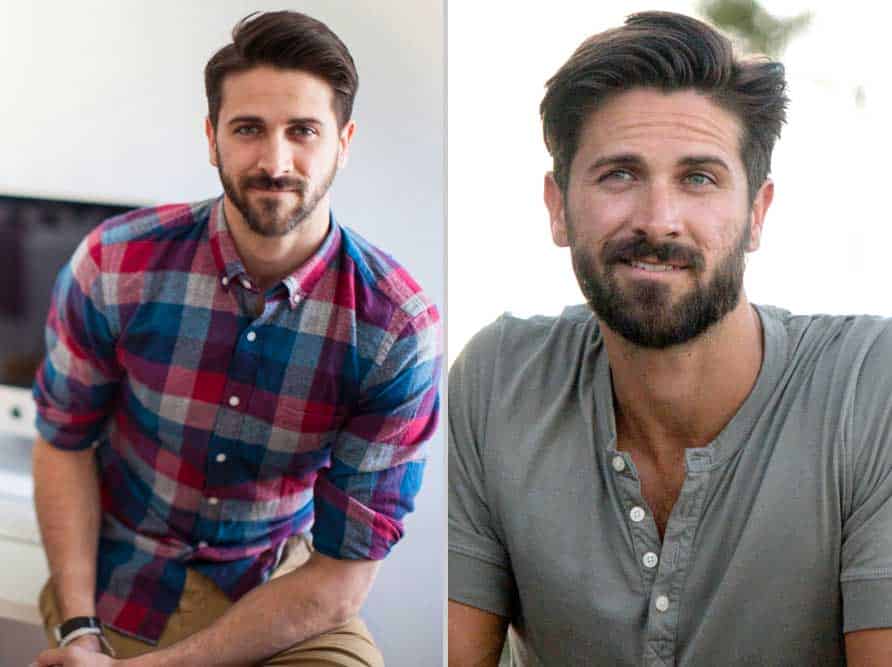 8. Using Regular Shampoo On Your Beard

Shampoo on a beard is like using bar soap on your face. It strips out natural oils your beard needs to be moisturized. Additionally, it’s your face underneath that crumb duster, so you want to treat it right, too. Instead, use beard wash. If your beard is extra bristley, condition it with beard softener.

9. Using Heat To Dry Your Beard

Depending on the size of your beard and the density of growth it can take a minute for your beard to dry. It’s common to hear about guys using hair dryers, but blow carefully – using heat on your beard after the shower will dry it out and make your hair brittle and frizzy.

According to a study cited by Zeus Beard, a 2011 study found that using your dryer’s coolest setting at a reasonable distance is actually better than letting it air dry.

10. Not Knowing When To Quit

Ok, we just told you to give your beard time … to be patient … keep the faith.

But for some of us, a beard just isn’t in the genetic cards. The best we can do is ever-longer adolescent scraggle that never fills in. If you really want a beard, it’s important to find out for yourself if you can do it. But it’s equally important to accept reality if you’re never going to have competition-winning face fur once the experiment runs its course.

So how do you know when to throw in the towel? Reddit’s Beard Advice thread recently supplied the answer. After about 12 weeks, as user BakerBalls recommends:

As a rule, whenever you can count the hairs in a particular area, it's not worth growing out.

Think about it: if you can count 5, 7, or even a dozen individual hairs on your cheeks, chin, or lip after a reasonable amount of time… is that ever going to become the fulsome combat beard you see on Instagram? And it may just mean that a full beard isn't for you, but if your mustache and/or goatee grow in nice and thick you can still rock those and shave the rest.

11. Not Checking Your Trimmer Setting

It’s an obvious one, but don’t dive in and trim off too much. Measure twice, cut once! Bear forums are full of bearded brethren who have lost months or years of growth because they accidentally shaved a chunk out of their beard and had to trim the rest to compensate. 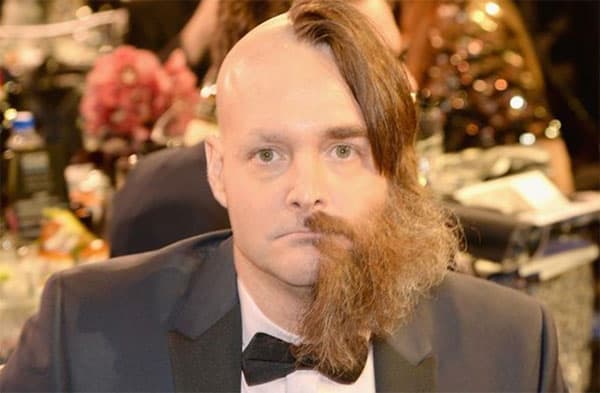 What Tips Would You Give The Proud Owner Of A Developing Beard?

A big thanks to Brio for supporting Primer's mission and for giving Primer readers an exclusive discount with code Primer10 on the Beardscape trimmer, making it cheaper than Amazon! Click here to check it out.

Grooming & Hair
Discipline is a skill anyone can learn.
Cutting through the confusion: A breakdown of common knife terminology.
You don't have to be a traumatized father fighting a fungi-based zombie apocalypse to wear this jacket.
Did You Miss These?
Until you graduated college, there wasn't much need for a week's worth of suits, dress shirts, and ties. Pulling together a professional wardrobe when you're offered a job doesn't need to be ... [more]
A step-by-step guide for making, achieving, and tracking better goals, plus 50 examples to get you going.
Ready to invest the time and money into raw denim? We'll get you started.
We've researched the best men's winter coats, based on material composition, product rating, and price.
Life can be overwhelming - Here's a proven method used by fighter pilots to make smart decisions fast and stay on top of it all.
And how to build them in under 30 days.
Do these now to keep your style strong and simple.
If you want to know how some rich actor gets in amazing shape, you're in the wrong place.
A look back as we gear up to move forward.