G-SHOCK believes a watch should be resilient and stylish; just like a modern man. We're proud to partner with them on this post!

What do you think of when you picture an international superspy?

Yes, he has an array of gadgets and the skills to get out of any situation. But, it’s the fact that after defying death and saving the day, he can walk into a bar unruffled, order his trademark martini, and still look like a million bucks.

The irony is, you're probably also imagining a gentleman outfitted in designer, luxury brands, not those designed for extreme physical abuse. But what if there was a brand so durable it's trusted by Navy SEALs, Army Rangers, astronauts, firefighters, and extreme outdoorsmen – and looked right at home on the wrist of a suited, suave secret agent?

G-SHOCK is a brand known for insane toughness.  But, the watches in their G-STEEL line, like the elegant GST-B100D, is the perfect marriage of style and indestructibility. 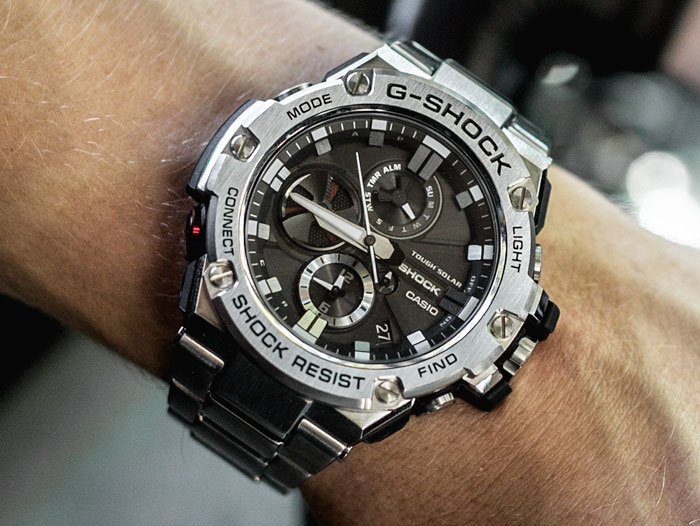 Every secret agent has a laboratory worth of research and development behind them. James Bond has Q. T’Challa has Shuri. G-SHOCK has Kikuo Ibe.

In 1981, Ibe, G-SHOCK’s legendary head of watch design, assembled a team of eight elite engineers that he called “Team Tough.” Their mission was to build an unbreakable watch.

Team Tough took their mission seriously, putting their prototypes through a battery of rigorous tests, including throwing them out of a 3rd floor men’s room window and running them over with a car. Years of work and tons of prototypes came and went, but the dream wasn’t realized until inspiration came from an unexpected place.

Passing by a playground, Kikuo Ibe became transfixed on a bouncing rubber ball. He thought to himself, “If you attached a watch to that ball, it could endure severe shocks.” Ibe came up with the “floating module.” The watch itself would be contained within a suspended module with only a few points of contact, providing the most effective possible shock protection with the most efficient use of material. 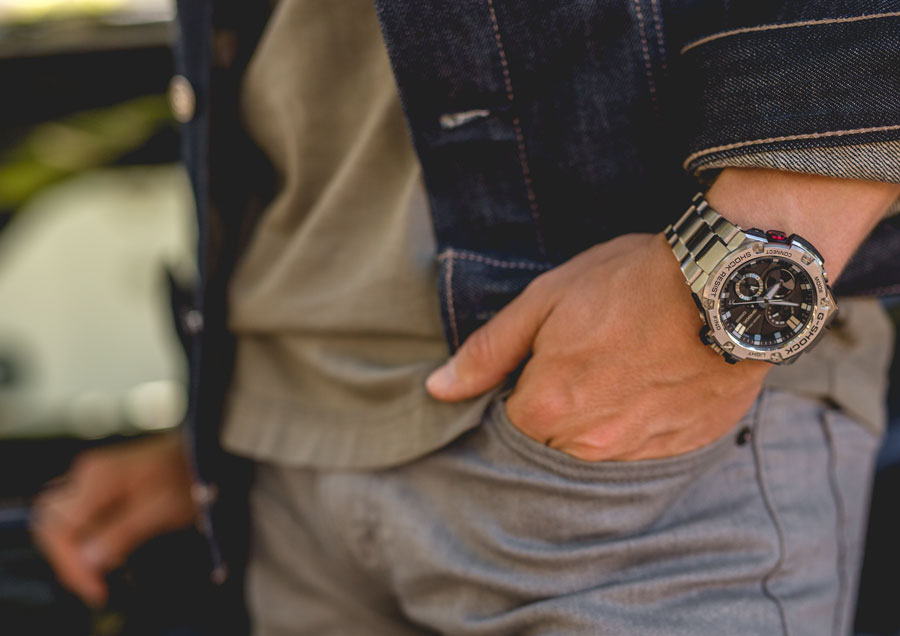 This breakthrough helped Ibe and company finally create a watch that passed their self-imposed rigorous standard, known as the Triple 10 test. This meant that the watch had to withstand a 10 meter drop, endure at least 10 atmospheres of water pressure, and have a battery life of 10 years.

The Triple 10 Test became the standard for G-SHOCK watches. This means that every G-STEEL watch can handle anything you can throw at it. Any fall, trip, or stumble you can live through, the G-STEEL can handle it too.

Like any good R&D team, Team Tough didn’t stop there. It was time to create a watch with the tech to match this kind of toughness. By 1989, the company released their first analog/digital model. By the mid-90s, they released their ISO certified Frogman watch.

For decades, G-SHOCK watches have always been on the cutting edge. G-SHOCK became the watch you take with you to the world’s remaining frontiers: from scuba diving off the coast of Indonesia to scaling peaks in the Alps to the endless expanse of outer space aboard the International Space Station. 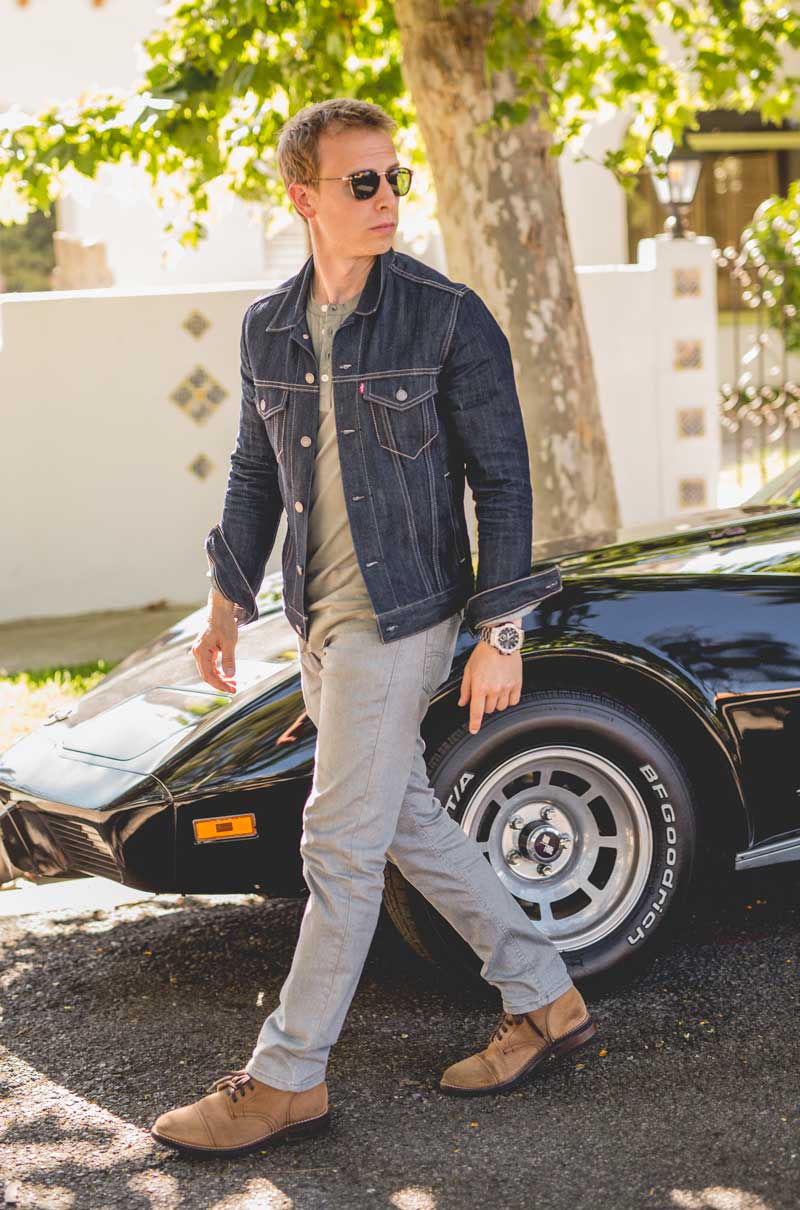 Fast forward to today. After building a watch that offers the ultimate in toughness and the premium in technology, the G-SHOCK Team decided that it was time for a watch that also offered top of the line style. The G-STEEL was born.

The G-STEEL is the superspy of watches. With a watch like GST-B100D, you get G-SHOCK power with sports car elegance. 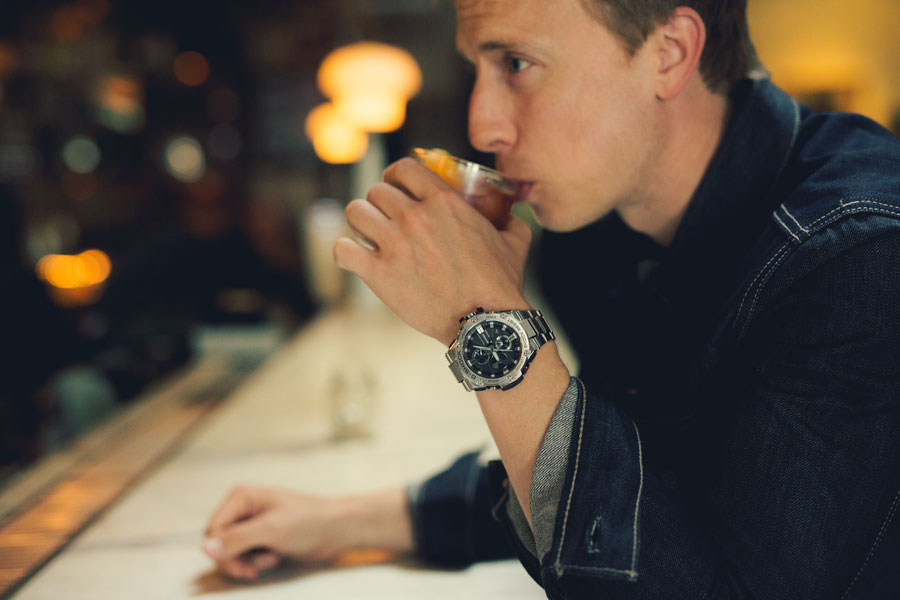 A Watch As Tough As You Are

The GST-B100 series offers shock resistance and water resistance up to 200m and toughness beyond other watches in its class. We aren’t saying you try to lose your footing on a steep hill, end up in the swimming pool at an elegant party, or get in a bar fight at a cocktail bar. We’re saying that things happen, and a G-STEEL watch is built to handle whatever might come your way.

Yeah, it can roll with the punches.

Like I said, this thing is a tank. Except unlike a tank, bulk is not an issue, the model GST-B100D is the slimmest G-STEEL yet, at only 14.1mm thick. 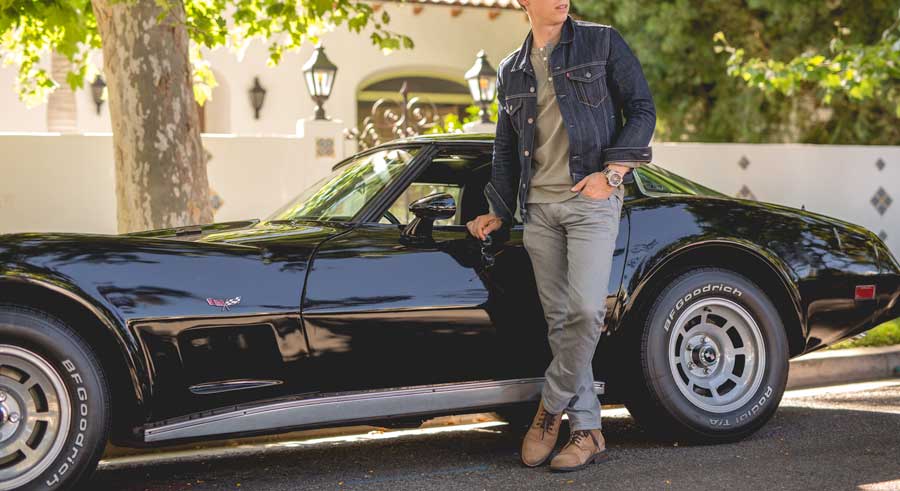 A Watch As Connected As You Are

With all the features, capabilities, and reliance on our phones these days, traditional watches have become all but jewelry. But smartwatches thus far have lacked a certain elegance. What if there was a traditional watch that could connect, update, and be controlled by your phone?

The time is set automatically four times a day, and with the assistance of the G-SHOCK Connected App, the time in 300 cities worldwide can also be displayed with a touch of a button. A sub-dial displays a second time zone, and the app can switch the times between the main and sub-dials. Whether you’re jetsetting to another continent or just escaping to a remote BnB one timezone away, the G-STEEL will keep up with you and keep you on time.

The GST-B100D can actually use Bluetooth to activate its “Find My Phone” feature. That’s right: the G-STEEL will make sure you don’t lose your phone. How many of your friends can you even say that about?

The watch’s autocalendar is guaranteed to keep the right time until the year 2099. It will keep the days straight even if you can’t. After all, a good secret agent can't be late for a high stakes poker game that the future of the world hinges on.

A Watch As Lit As You Are

Adventurous customers report the watch’s light is bright enough to find your way through a campsite in the middle of the night. This watch also uses light for power. The Tough Solar system converts even the weakest illumination into energy. The rechargeable battery works in concert with the watch’s solar capabilities to make sure that even if all else is lost, you’ll never be without your watch.

Just minutes in sunlight recharges the battery, which you can expect to last the life of your watch (some customers report 20 years or more).

Not only is the battery system perfectly built, it looks cool too. A rotating disk on the left cut like a jet engine serves as the battery indicator. 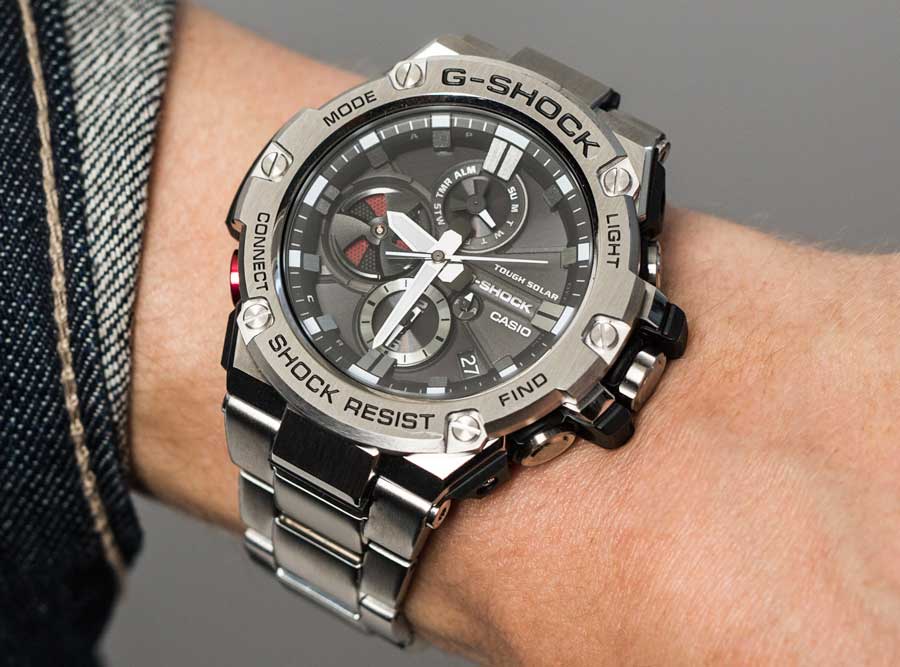 Watch For The Future

Kikuo Ibe is still working today, and he has recently set his sights on the stars. His pet project has become developing a G-SHOCK suitable for use during spacewalks. If he’s looking to outer space, there’s no telling what he’ll come up with here on Earth.

Investing in a G-STEEL is like hiring your own personal R&D team. You already know that a G-STEEL can keep up with you. It’s even more of a comfort to know that G-STEEL will keep up with the future you as well. With every new problem the world comes up with, G-SHOCK has always found a solution. That’s not going to change any time soon.

The G-STEEL offers you one thing a secret agent can never have: peace of mind. The G-STEEL can’t promise to keep you out of trouble, but if trouble finds you, you’ll be glad you have a G-STEEL.

Click here to check out the full G-STEEL line!

StyleWatches
With 15 outfit examples to get you started.
Lighten up your winter wardrobe.
Getting the perfect fit right off the rack is like winning the lottery. Whether you wear suits or selvedge denim, this guide demystifies the process of tailoring and alterations.
Did You Miss These?
After reading through this guide, you should have a working knowledge of the different types of wine and enough vocabulary to set out and buy your first serious bottle. (And maybe impress your ... [more]
Desire greater.
Do you find yourself lying awake at night, fretting over things like the kid you made fun of at recess 18 years ago or that stupid thing you said in the elevator yesterday? We all do it, and it's ... [more]
Discipline is a skill anyone can learn.
Cutting through the confusion: A breakdown of common knife terminology.
You don't have to be a traumatized father fighting a fungi-based zombie apocalypse to wear this jacket.
We've researched the best men's winter coats, based on material composition, product rating, and price.
Life can be overwhelming - Here's a proven method used by fighter pilots to make smart decisions fast and stay on top of it all.
And how to build them in under 30 days.