5 Options for Your First Nice Pair of Dress Shoes

Trusted brands to step out in style without breaking the bank.
29 April,2020By Nick Guzan
This post may contain affiliate links, read about our editorial promise

So you're in the market for your first pair of nice men's dress shoes? But you don't know where to start, or which dress shoe brands are worth the money.

The first step: determine what style you want. Your needs may vary, but the best place to start is easily that most classic of dress shoe: a cap-toe oxford. Both formal and practical, the oxford’s versatility means you can wear it with anything from a cardigan and dark jeans to your dressiest charcoal or navy suits. 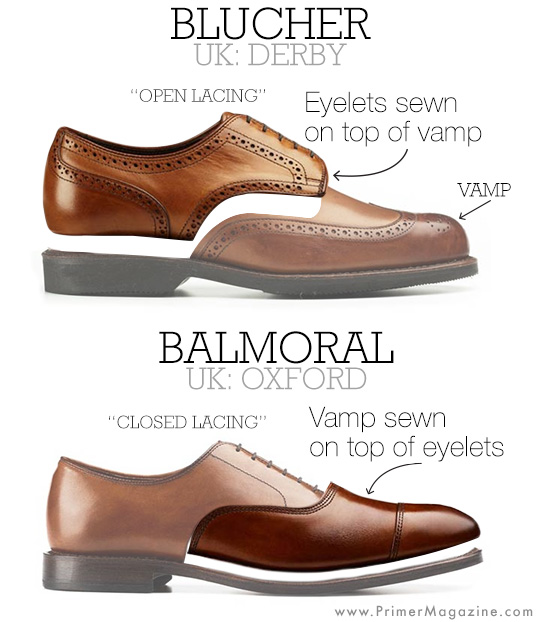 Marketing shortcuts mean some retailers label all lace-up dress shoes as oxfords, but you can easily make the distinction between oxfords and less formal derby shoes yourself once you know what to look for. If the lacing is open, it’s a derby. If the lacing is closed, it’s an oxford. There’s certainly nothing wrong with derby shoes, but if you’re going to invest a little more, you may as well give yourself as much formal legroom – or footroom – as possible.

Now that you’ve got a shoe style in mind, determine your budget. You should realistically expect to spend anywhere from $150 to $400 for a decent pair that should last you years, if not decades. You may be tempted to take up a lesser retailer on their $40 special, but you’ll soon discover why your new oxfords cost the same as a decent bottle of wine.

PRO TIP: Instead of cheap $40 shoes, take those two crisp Jacksons and invest in two sets of shoe trees. They’ll extend the life of your investment and save you more than a few trips to your local cobbler. 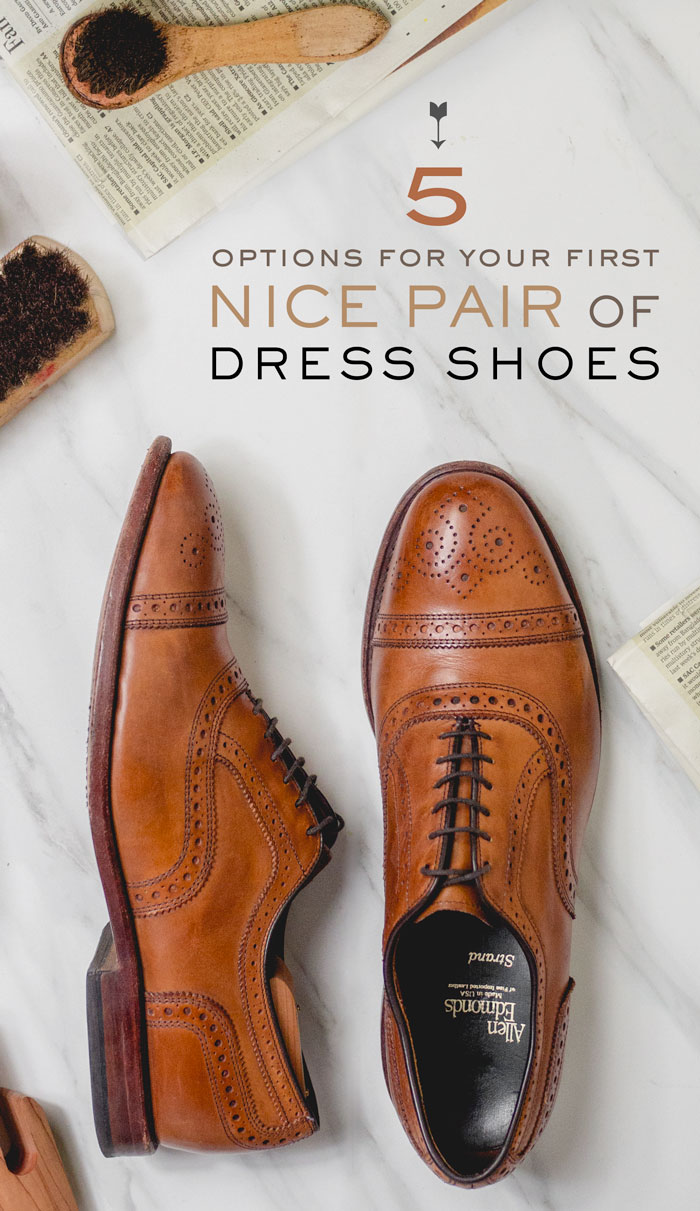 Black shoes may seem like the obvious first choice, but the right brown shoes can go well with most suiting and casual wear while also providing a richer depth that best showcases the quality of your investment. To emphasize this, look at cheaper black dress shoes next to more expensive black shoes; then look at cheaper brown dress shoes next to more expensive brown shoes. I guarantee the higher quality brown leather will be immediately apparent in ways the black won’t be, especially to untrained eyes.

The budget-minded gent shopping for his first pair of nice shoes should avoid thinking that the more he pays, the better the shoe. James Bond’s $1000+ shoes from Crockett & Jones and John Lobb are certainly fine products but hardly essential.

With your budget and desired features in mind, here are five tried-and-true shoemakers that will help you find your footing to get the most bang for your hard-earned buck:

The Best Dress Shoe Brands to Start with: 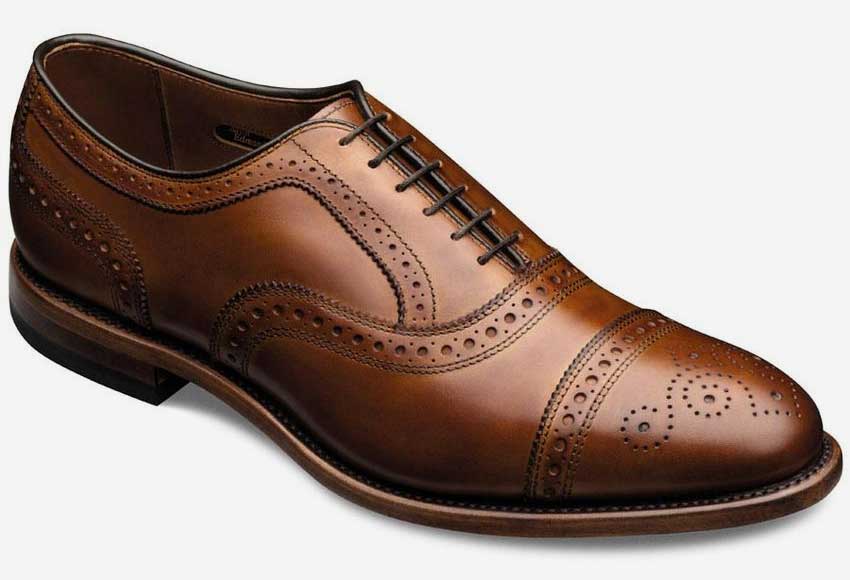 “An American Original” since its Port Washington, Wisconsin shop opened in 1922, Allen Edmonds built its reputation on craftsmanship and attention to detail. The company follows an exhaustive 212-step manufacturing process for all of its Goodyear welted shoes.

The Park Avenue Cap-Toe Oxford lives up to the high pedigree of its name, offering wearers a beautifully crafted shoe available in a variety of colors from the standard black and brown to oxblood and navy. Its $395 price tag places it among the higher end of these options, but it carries the hallmarks of Allen Edmonds quality from its lined premium calfskin leather upper to the single oak leather sole. 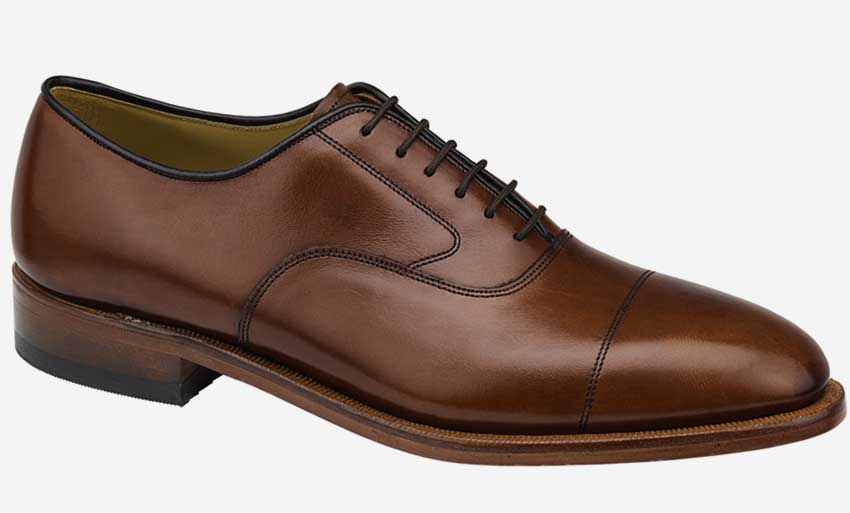 Since its inception in Newark as “The William J. Dudley Shoe Company” in 1850, Johnston & Murphy has proudly established itself as the presidential choice by crafting custom shoes for then-President Millard Fillmore, “kicking off a tradition of shodding every U.S. President since,” including Abe Lincoln’s size 14 lace-up boots.

Despite this presidential pedigree, Johnston & Murphy remains accessible to the masses with affordable quality footwear that will convert your cubicle to your own executive branch.

The Melton Cap Toe with leather lining and Goodyear welt construction leather soles is a particularly affordable option at less than $180 given its quality and consistently strong reviews from wearers. On the higher end at $279, Johnston & Murphy’s Hyde Park II is elegant in its simplicity. 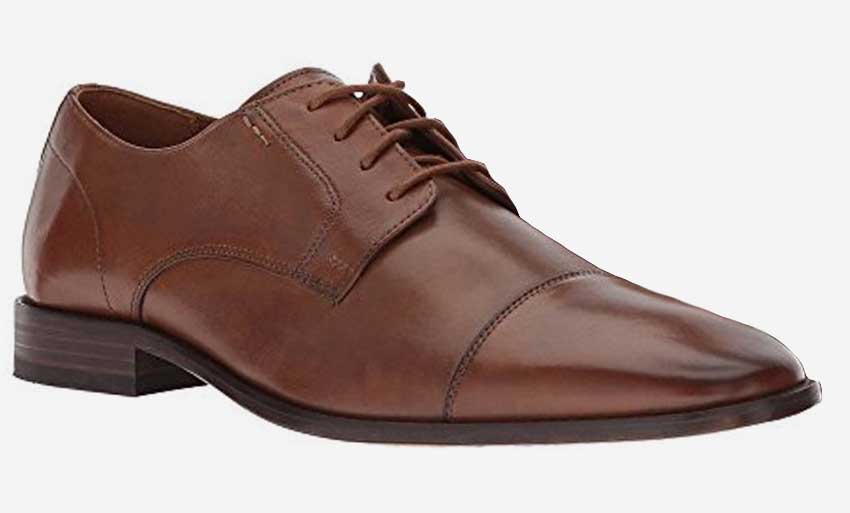 Clarks has the oldest heritage on this list, dating back to 1825 when Cyrus and James Clark broke ground with their slipper made from sheepskin off-cuts, beginning a centuries-long foundation built on innovation that includes the development of the desert boot in 1950 (and you know we love desert boots) to modern comfort cushioning technology.

The brand has grown to more than 1,000 stores around the world – including one most likely in your local mall – so they can be privy to some marketing shortcuts, but with the longest heritage and lowest price? Consider Clarks to be the tried-and-true Ford of the dress shoe world.

The Nantasket cap-toe derby shoe from their Bostonian line is available in both “dark tan” and black for only $120, making it the most affordable all-leather option of this list (and also the only one with open lacing) and designed for comfort with its removable OrthoLite footbed. 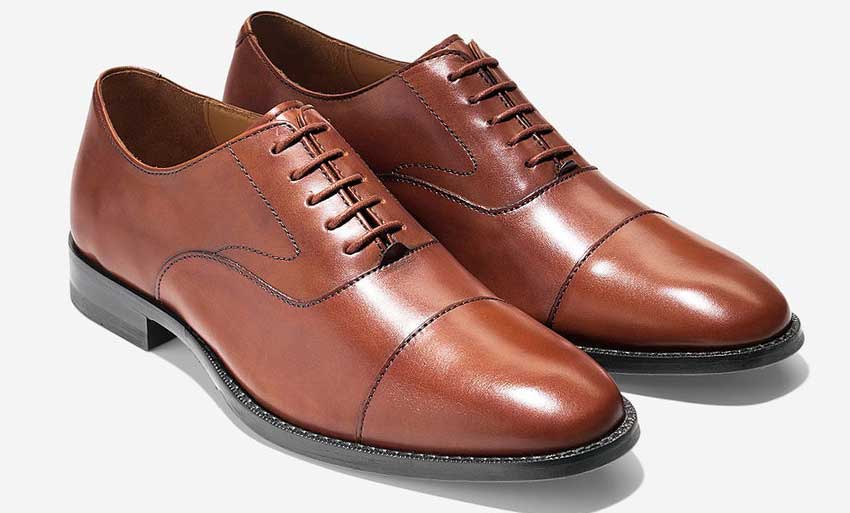 The relative newbie on this list, Cole Haan opened its first store in 1928 and has grown from its Chicago shoe store into a global lifestyle brand with a focus on performance and sustainability.

Cole Haan’s Garrett Grand Cap-Toe Oxford remains consistent with the brand’s modern direction with its “running shoe-inspired energy” and Grand.ØS technology to ensure flexibility, breathable, lightweight, and cushioning. Available in British tan and black, buyers can plan to spend up to $200 on a pair.

You can shave off the price of Cole Haan oxfords by opting for the all-leather Williams Cap-Toe II Oxford for around $140, also available in British tan and black, with an elegantly simple aesthetic though it lacks the Grand.ØS technology of the Garrett and other selections in the brand’s lineup. 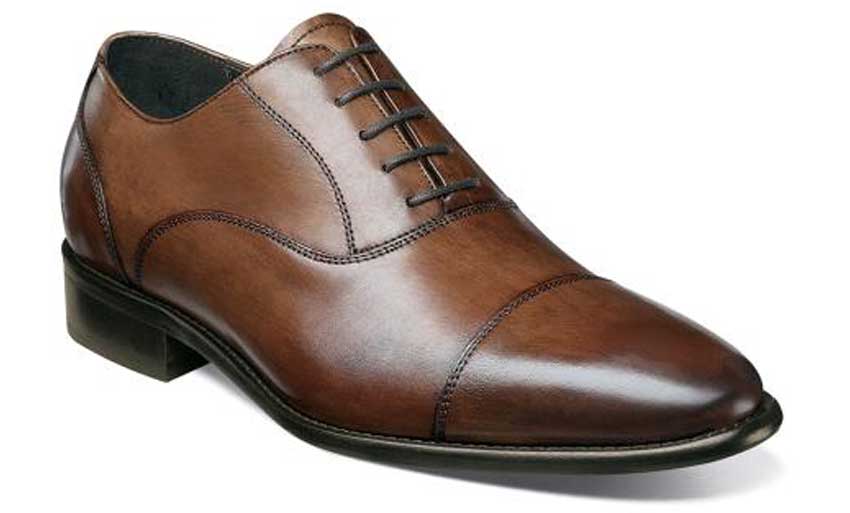 Milton Florsheim began making shoes in his Chicago factory in 1892, beginning a tradition of crafting footwear for “entrepreneurs and self-starters in big cities and small towns across a fast-growing nation” as well as for the U.S. military from the Spanish-American War through World War II.

A proud moment in Florsheim’s distinguished history also includes the custom size 37 boots they made for Robert Pershing Wadlow, who stood at 8’11” and is considered the tallest man in recorded history.

If you’re willing to forgo an all-leather outsole, the Corbetta cap-toe oxford is going for less than $110 for most sizes in black, cognac brown, and a few others.

Whether you spend most of your time in suits, jeans, or anything in between, owning at least one pair of nice shoes makes sense. A timeless pair of well-made brown oxfords from a quality brand will be fashionable, durable, and versatile enough to serve you well for years.

What shoe brands do you consider when shopping for a nice pair?

Professional StyleShoes & BootsStyleStyle Essentials
Getting the perfect fit right off the rack is like winning the lottery. Whether you wear suits or selvedge denim, this guide demystifies the process of tailoring and alterations.
Discipline is a skill anyone can learn.
Cutting through the confusion: A breakdown of common knife terminology.
Did You Miss These?
The most masculine shirt is also the most versatile.
The secrets to effective leadership aren’t just in books, they’re in our stories.
Go beyond the bland advice offered by friends and blogs to discover what it’s really like to have a baby and get pro tips for preparing to make it the best it can be.
You don't have to be a traumatized father fighting a fungi-based zombie apocalypse to wear this jacket.
We've researched the best men's winter coats, based on material composition, product rating, and price.
Life can be overwhelming - Here's a proven method used by fighter pilots to make smart decisions fast and stay on top of it all.
And how to build them in under 30 days.
Do these now to keep your style strong and simple.
If you want to know how some rich actor gets in amazing shape, you're in the wrong place.