I’ll be honest with you guys: I don’t like regular gin fizzes. I mean, sure, there are worse things in the world than the combination of gin, lemon juice, and sugar, topped off with some fizzy water, but I typically find them boring. If I’m going for a long drink, I want a Singapore Sling, or something equally complex. So I don’t make many gin fizzes.

But the Ramos Gin Fizz isn’t just any gin fizz. It’s a fantastic concoction that’s got nearly as much in common with a milkshake as it does with a typical cocktail. Born in the city of New Orleans, created in 1888 by Henry C. Ramos, the Ramos Gin Fizz was by the turn of the century widely available. Or at least, knockoffs were; the original was thought by most connoisseurs to be superior to the other drinks that bore its name—“often imitated, never duplicated” as the saying goes—and Ramos’s bars did swift business right up until prohibition, when the drink was driven underground. You can still find it here and there (especially in New Orleans), but because of its large, strange ingredient list and lengthy preparation time, few bars offer it. More’s the pity.

To make the Ramos Gin Fizz, one must combine its substantial ingredient list (yes, even the soda water) in a large shaker – I recommend a Boston shaker for this one, not a smaller cobbler shaker. If all you have is the latter, hold the soda water until after shaking and then mix it in the glass, unless you really enjoying cleaning gin fizz ingredients off the walls, floor, and possibly ceiling of your kitchen. Once you’ve got everything in there, add a bunch of ice and shake thoroughly, and I mean thoroughly. Shake until your brow’s beaded with sweat, until the shaker’s so cold it’s painful on the hands, and until you’re convinced there can’t be much ice left at all. Then shake for another minute or so. In all, you’re probably looking at eight to ten minutes of solid shaking. Seriously. If you want to be true to the original, go for twelve.

It’s worth it. The resulting drink will be strange and foamy and ethereal, its ingredients combining together beautifully to form the sort of ambrosia you’d expect the gods on Mount Olympus to be drinking. The small amount of soda makes this “fizz” barely fizzy, but that’s OK; you’re using the bubbles as much for the texture they bring to the finished drink as for any effervescence.

The Ramos Gin Fizz is a strange addition to the world of cocktails, but a delicious one. It’s not easy to make, but it’s a classic for a reason. Give it a shot, or better: go grab one at a bar and let someone else do the shaking for you. 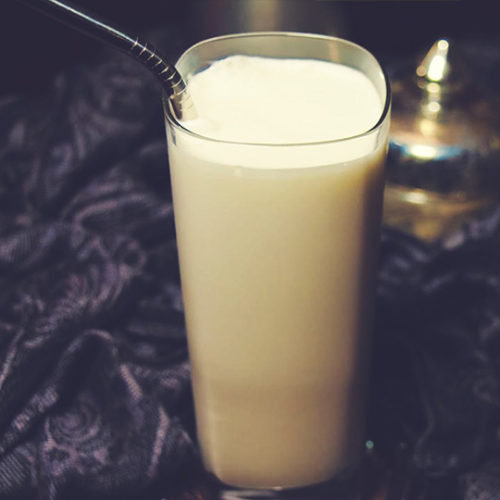 Cocktails & AlcoholIt’s Friday…Have a Drink
Getting the perfect fit right off the rack is like winning the lottery. Whether you wear suits or selvedge denim, this guide demystifies the process of tailoring and alterations.
Discipline is a skill anyone can learn.
Cutting through the confusion: A breakdown of common knife terminology.
Did You Miss These?
Summer heat requires our outfits to be made up of only a short sleeve shirt and shorts – instead of getting frustrated by a lack of variety and layers, it's the perfect time to grow your ability to ... [more]
Discipline is the key to all hard things – but it is so much more than just "forcing yourself to do things you don't feel like."
Your mid-20's can be a rough time. Our man's got the 6 stages every quarter-lifer goes through. Here's to making it out on top.
You don't have to be a traumatized father fighting a fungi-based zombie apocalypse to wear this jacket.
We've researched the best men's winter coats, based on material composition, product rating, and price.
Life can be overwhelming - Here's a proven method used by fighter pilots to make smart decisions fast and stay on top of it all.
And how to build them in under 30 days.
Do these now to keep your style strong and simple.
If you want to know how some rich actor gets in amazing shape, you're in the wrong place.