sidebar_content
Skip to Main Navigation Skip to Content
You can make innumerable sours using this formula, and just about all of them will be pretty good. From there, you can experiment.
4 February,2021By Christopher Buecheler / Photos By Christopher Buecheler
This post may contain affiliate links, read about our editorial promise

This is a classic so obvious it seems almost unnecessary to mention it, and yet, in this era of fancy cocktails with thirty ingredients, each infused with the bark of a different tree harvested only by solstice moonlight from its own unique elven kingdom, sometimes it’s good to take a step back and make something a little … easier?

The whiskey sour obeys the classic sour formula, which I’ve mentioned before in my Five Tips for Making Great Cocktails article. Dale DeGroff details it thoroughly in his book The Craft of the Cocktail, but I’ll give you the short version here: two, one, three-quarters. That’s liquor, sweet, and sour. You can make innumerable sours using that formula, and just about all of them will be pretty good. From there, you can experiment. Add some bitters! Adjust the proportions; I like basically all of my citrus drinks very dry and boozy, so I take both the citrus and sweetener way down, but your tastes may vary. The good news is: if the drink is too sweet or too sour, it’s easy to just add a bit more of a given ingredient.

The whiskey sour is a particularly good example of the breed. Why? Because whiskey is so widely varied, sometimes delivering subtlety, sometimes a swift punch to the jaw. I made this whiskey sour with a nice bourbon, but you could just as easily use rye or Irish whiskey. Like a bit of smoke to your drinks? Why not try an Islay scotch? It might be brilliant, but even if it’s not, it’ll almost assuredly be drinkable. That’s the beauty of sours.

This drink is optionally made with a teaspoon or so of egg white, for added silkiness in the mouthfeel and a foamier head. Some folks say that this makes it a Boston Sour, not a Whiskey Sour, but others say it’s the same thing either way. The International Bartenders Association says the egg white is optional. I love egg white in my Amaretto Sours, but I don’t think it adds much here, and since eggs are kind of obnoxious to handle when you’re just making a single drink, I tend to skip it.

One other tip: since the drink is served over ice, you’ll want to short-shake it, meaning give it about half the shaking time you’d give an “up” cocktail. Otherwise it can rapidly over-dilute as the ice melts. Big ol’ ice cubes also help slow the dilution (I like the two inch Tovolo molds, but Primer has a great guide as well). Note that if you’re using egg white, you’ll definitely want to “dry shake” it for a bit before adding the ice, to help get everything combined. 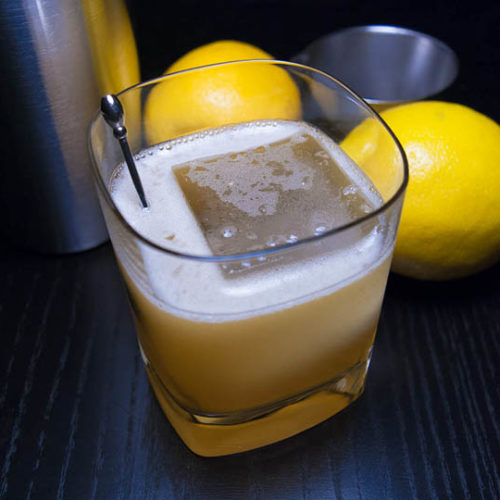 Cocktails & AlcoholIt’s Friday…Have a Drink
Lighten up your winter wardrobe.
Getting the perfect fit right off the rack is like winning the lottery. Whether you wear suits or selvedge denim, this guide demystifies the process of tailoring and alterations.
Discipline is a skill anyone can learn.
Did You Miss These?
Get perfectly diced onions fast with this simple technique.
Learn how the latest discoveries in psychology can motivate you through the toughest tasks: The ones you don't want to do.
Henry Ford didn’t drop in engines. Steve Jobs didn’t solder iPhones. Why are you trying to do everything yourself? Use our fool-proof guide for off-loading your workload so you can focus on what... [more]
Cutting through the confusion: A breakdown of common knife terminology.
You don't have to be a traumatized father fighting a fungi-based zombie apocalypse to wear this jacket.
We've researched the best men's winter coats, based on material composition, product rating, and price.
Life can be overwhelming - Here's a proven method used by fighter pilots to make smart decisions fast and stay on top of it all.
And how to build them in under 30 days.
Do these now to keep your style strong and simple.