This cocktail’s name is a big middle finger (or whatever the era-appropriate gesture was) to Prohibition. At the time, the 18th Amendment to the US Constitution made the production, transport, and sale of alcohol illegal in the United States and within three miles of its shores. When this limit proved not enough, it was further extended to twelve. This meant that once you were twelve miles out into international waters, the party could begin, and it often did so with this, its namesake drink.

Ted Haigh, in Vintage Spirits and Forgotten Cocktails, asserts that the drink was created by one Tommy Millard, and quotes a 1934 newspaper article which speaks of the traveling journalist moving between world capitals “like a leaf on the wind.” This, then, is a man who would know a thing or two about the edges of Prohibition.

The drink is boozy, mixing three separate types of base liquor. That’s pretty unusual, but the grenadine and lemon juice help smooth things out. I find it a bit tart and usually add an extra quarter ounce of simple syrup, but I’ve left the recipe below as it was originally written. As always, you’ll want to use real pomegranate grenadine, and not sugar water with red dye thrown into it! 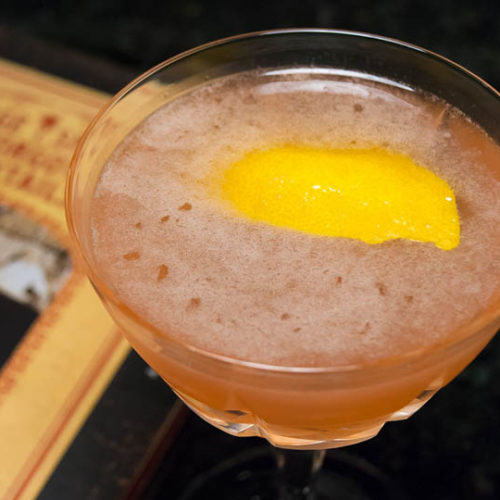 Cocktails & AlcoholIt’s Friday…Have a Drink
Lighten up your winter wardrobe.
Getting the perfect fit right off the rack is like winning the lottery. Whether you wear suits or selvedge denim, this guide demystifies the process of tailoring and alterations.
Discipline is a skill anyone can learn.
Did You Miss These?
Discipline is the key to all hard things – but it is so much more than just "forcing yourself to do things you don't feel like."
An easy how-to for pocket billiards.
We settle one of the most asked questions in menswear: “What do I call my shirt?”... and other shirt FAQs.
Cutting through the confusion: A breakdown of common knife terminology.
You don't have to be a traumatized father fighting a fungi-based zombie apocalypse to wear this jacket.
We've researched the best men's winter coats, based on material composition, product rating, and price.
Life can be overwhelming - Here's a proven method used by fighter pilots to make smart decisions fast and stay on top of it all.
And how to build them in under 30 days.
Do these now to keep your style strong and simple.