Spring has arrived, and the longer, warmer days mean we can return to the occasional long drink without fearing that we’re going to freeze into a solid block of ice the moment we take the first sip!

Why not start with the venerable Tom Collins? First described by master bartender Jerry Thomas in the 1876 edition of his Bar-Tender’s Guide, though cocktail historian David Wondrich speculates that it may in fact be a renamed version of a much older drink that went by the name “John Collins” in the 1850s and appears to have an identical recipe. The cocktail may have switched names due to the use of Old Tom gin, or it’s possible it was renamed after a practical joke in which, basically, someone would explain to a friend that a man named Tom Collins was badmouthing that friend, in the hopes that the friend would rush off to confront this imaginary jerk. Apparently this was big fun back in 1874.

The drink itself is notable mainly because it’s a fairly early example of a sparkling cocktail. It’s an easy, safe, friendly cocktail: basically sparkling lemonade with a kick. You’ll be hard-pressed to find too many people who don’t enjoy it, especially on a spring or summer afternoon, kicked back on the porch or hanging out by the pool. To that end, I suggest a light hand on the gin – a scant ounce and a half should do it. If you want something stronger, just add more.

If you find this drink’s a little one note for your style, a good dash or two of bitters and perhaps a quarter ounce of fruit liqueur can add substantial depth of flavor. Oh, and if you don’t have Old Tom gin, use regular gin and add an extra quarter ounce of simple syrup. It’ll work fine. 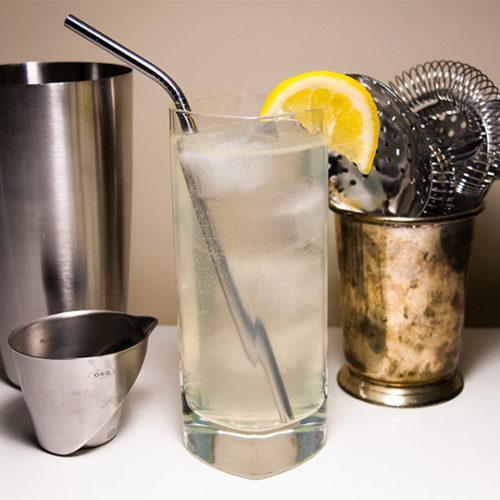 Cocktails & AlcoholIt’s Friday…Have a Drink
Bring your body and mind back into a relaxed state.
There’s no time like the present to check some names off your gift list.
Your kids need you; your phone doesn’t.
Did You Miss These?
Here's to not getting stranded for an hour on a creepy road at midnight.
The single best fashion tip for dressing better: how to incorporate smart casual outfits and elements into your wardrobe so that you’re the best dressed guy – wherever you go.
Start using science to get a consistent doneness with a delicious sear, with this method employed by top restaurants.
The last hurrah of the Black Friday sales weekend.
Black Friday is here. And we've put in some serious time distilling what's worth shopping and what's worth skipping.
Save on gifts and stock up on essentials.
Cigars are best enjoyed socially - here’s our crash course on how to build the best experience.
Coming up with gift ideas that are reasonably priced can be a chore. These 100 gifts will make any man happy as a kid, and most are quite affordable.
Yes, the holidays are all about giving to others – but that doesn't mean you can't benefit from the deals too.