We’re featuring an original creation of mine in today’s article. The Beryl was an attempt to create a drink that could serve as an introduction to the powerful flavor of anise and anise-like herbs and spices. The flavor—which is similar to that of fennel, caraway, and licorice root—is a little challenging for many people, myself included! I wanted to learn to enjoy it, even if I’m never going to be downing black jelly beans by the handful, so I set about working on a drink that would let the flavor shine through without smacking me over the head with it. The end result was a success! I make this cocktail often, and thoroughly enjoy drinking it.

There are a ton of liqueurs that use anise or licorice flavors. They’re present in many Italian Amari, French Amers, and herbal liqueurs like Chartreuse and Benedictine. The Greek liqueur Ouzo and the Italian liqueur Sambuca are both heavily anise-flavored (too much for this drink). Anise flavoring is also extremely prevalent in absinthe, and in absinthe-like liqueurs such as pastis and Herbsaint.

I decided to use a reasonable dose of Green Chartreuse, because it uses anise as an ensemble player rather than as the star. To that I added a small amount of pastis, which ups the anise flavor significantly without causing it to dominate the drink (you could also use absinthe here, if you have it on hand). I didn’t want to use gin exclusively as a base liqueur, fearing the botanicals might overwhelm or contrast with the anise flavors I was trying to highlight, so I instead cut it with equal parts vodka, which is essentially flavorless. Celery bitters add both citrus and vegetal notes, working surprisingly well to pull things together. A star anise pod as garnish helps add aroma without impacting flavor.

The finished drink accomplishes the mission of bringing plenty of anise flavor to the party without being overwhelming. It’s a shimmering light green, which along with the unusual garnish makes it as compelling to the eyes as it is to the nose and tongue. If you’re interested in growing an appreciation for anise and licorice flavors, and want to start somewhere that’s not overwhelming, I strongly recommend giving the Beryl a shot! 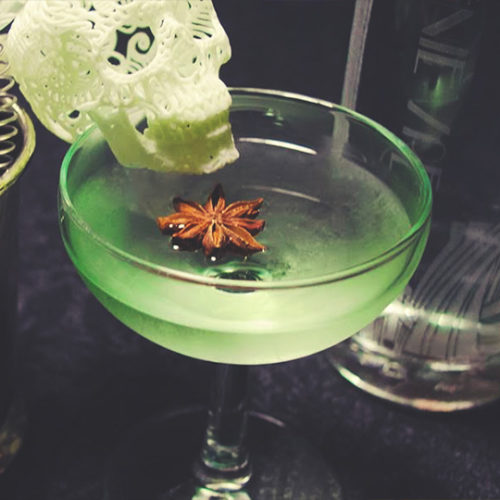 Cocktails & AlcoholIt’s Friday…Have a Drink
Lighten up your winter wardrobe.
Getting the perfect fit right off the rack is like winning the lottery. Whether you wear suits or selvedge denim, this guide demystifies the process of tailoring and alterations.
Discipline is a skill anyone can learn.
Did You Miss These?
Cleaning the clutter off of surfaces and emptying the dishes in the sink ain't enough.
Whether you're dressing up or going for comfort, the sweater is one of the most versatile pieces in a man's wardrobe.
Great beer tastes even better when you surround it with the right things - friends, sports, and of course, food.
Cutting through the confusion: A breakdown of common knife terminology.
You don't have to be a traumatized father fighting a fungi-based zombie apocalypse to wear this jacket.
We've researched the best men's winter coats, based on material composition, product rating, and price.
Life can be overwhelming - Here's a proven method used by fighter pilots to make smart decisions fast and stay on top of it all.
And how to build them in under 30 days.
Do these now to keep your style strong and simple.