Champagne’s traditional at New Year’s, of course, but sometimes it’s nice to go a couple of levels further. This is an easy and inexpensive cocktail to make, and scaling it up for guests is simple, since you can easily fit at least eight servings in a mixing glass.

Kirsch (or Kirschwasser), a cherry-based liqueur, is reasonably cheap, and the raspberry syrup is inexpensive as well. It can be found in most grocery stores, usually near the maple syrup, and can also be ordered online. It’ll last a good long while after opening, too, but I recommend keeping it refrigerated.

The original recipe that I found on CocktailDB is called Champagne Fraise and calls for a strawberry to be dropped in rather than a lemon peel, but strawberries aren’t in season, so that didn’t seem to make much sense to me. I went with homemade Asian citrus bitters and a lemon twist instead, and it worked very well.

Oh, and as far as the sparkling wine goes … no need to bust out the Veuve, here. For mixing, I usually go with an inexpensive Prosecco or Cava, preferably something very dry like a brut. The other ingredients will bring plenty of sweetness. 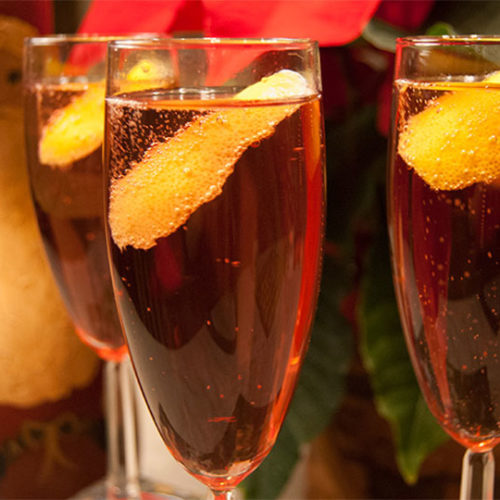 Cocktails & AlcoholIt’s Friday…Have a Drink
Bring your body and mind back into a relaxed state.
There’s no time like the present to check some names off your gift list.
Your kids need you; your phone doesn’t.
Did You Miss These?
The greatest obstacle to success isn’t outward competition. It’s inward doubt. For many of us, this doubt is so pervasive that it causes us to sabotage our selves.
Come April, Uncle Sam wants his cut – here are 3 essential concepts on tax preparation for beginners in an easy to understand video format.
Admittedly, in our current world, the thickheaded male perspective of "this is a man's job and that is a woman's job" is thankfully dwindling by the day, but there are still a great deal of guys out ... [more]
The last hurrah of the Black Friday sales weekend.
Black Friday is here. And we've put in some serious time distilling what's worth shopping and what's worth skipping.
Save on gifts and stock up on essentials.
Cigars are best enjoyed socially - here’s our crash course on how to build the best experience.
Coming up with gift ideas that are reasonably priced can be a chore. These 100 gifts will make any man happy as a kid, and most are quite affordable.
Yes, the holidays are all about giving to others – but that doesn't mean you can't benefit from the deals too.