Someone’s Finally Invented A Solution To The Wallet Shuffle

The science, history, and common sense behind why you should get a front-pocket wallet.
28 July,2018By Stillman Brown
This post may contain affiliate links, read about our editorial promise 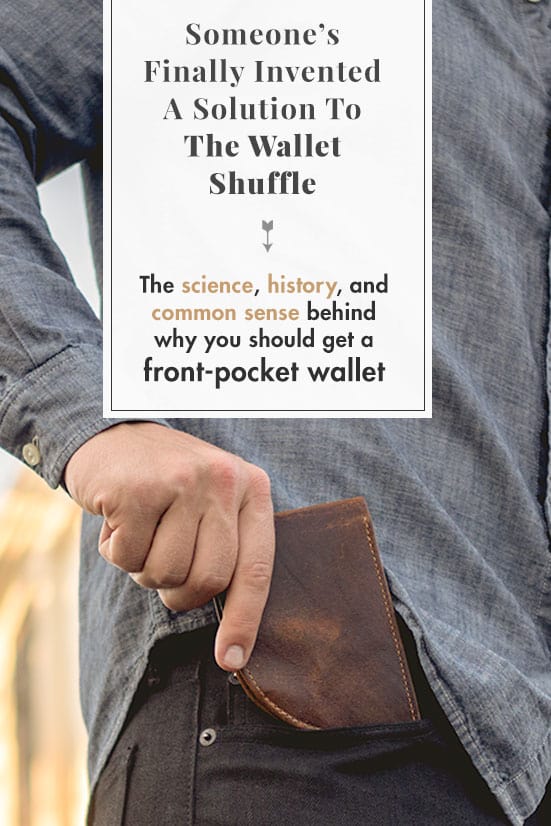 Ready to try a front pocket wallet? We've partnered with Rogue Industries to get Primer readers a 20% discount sitewide, including their best-selling American-made Bison Leather Wallet and Waxed Canvas Duffle. Use code PRIMER20 at checkout, valid for a limited time!

What’s the first annoying thing you have to do after leaving the house in the morning?

Sure, you could say, “Go to work,” or “Sit in traffic,” but is that really the first frustration of the day?

The first speed bump of my day is in my own back pocket. I’m talking about my wallet.

The Wallet Shuffle Is Super Annoying … Is It Necessary?

When I commuted to work on a train I had to discreetly transfer it from my back pocket to my backpack or briefcase to avoid sliding in to the person next to me.

Now that I drive to work, the first thing I do when I slide into the driver's’ seat is fish it out and toss it in the dashboard cubby (where, incidentally, I sometimes forget it). At least it's safe in the car, are you one of those guys that immediately puts their wallet on the table or bar to avoid having to sit on it? How many times have you had to scramble back later when you realize you left it there? We're looking at you, Shane Martin.

It’s called the Wallet Shuffle, and it’s a near-daily irritant for millions of men across the globe.

Unless you rock a super-minimalist wallet – or stuff a few loose cards and bills into your pants – you’ve suffered from the Wallet Shuffle. Any time you sit down to dinner, or at a bar, a movie, or your office chair you have to take your wallet out of your back pocket and … do something with it.

Now, you might be saying, “So it’s a little annoying, what’s the big deal?”

Unlike fear, love, and lust, annoyance – as an emotion – is little studied by science. That doesn’t mean it isn’t bad. Scientists think annoyance is a milder version of our activated fight or flight response, and chronic activation of that response is really bad for your health. In other words, those small annoyances you put up with every day aren’t doing your lifespan any favors.

Why Do We Put Wallets In Back Pockets, Anyway?

While the origins of walletry stretch back to ancient Greece, the concept of the wallet didn’t come about until the widespread adoption of paper money in the 1600s. Before then, people used coin purses – which actually sounds much, much worse.

The early wallet wasn’t just for money. In addition to calling cards, bills, and account books, they were also used for tobacco, dried meat, and fire starting paraphernalia.

The modern, multi-slotted bifold wallet arose in the 1950s as credit cards became popular. The question is, when did men start carrying them in their back pocket?

Despite exhaustive research, the answer to this question is shrouded in the mists of time. One possible explanation: as suit jackets became less commonplace in the 70s and 80s, men had to put their wallets somewhere. 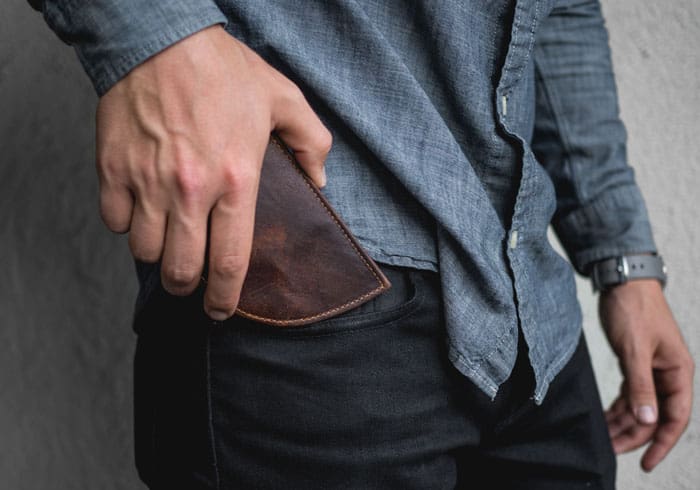 A Wallet In Your Back Pocket Is Bad For Your Back

It’s not just the risk of those pesky pickpockets that swarm America’s streets – a wallet in your back pocket can be bad for your back.

According to one chiropractor, the imbalance of sitting on a wallet can lead to pain, irritation of the sciatic nerve, and eventually joint degeneration in the lower back. 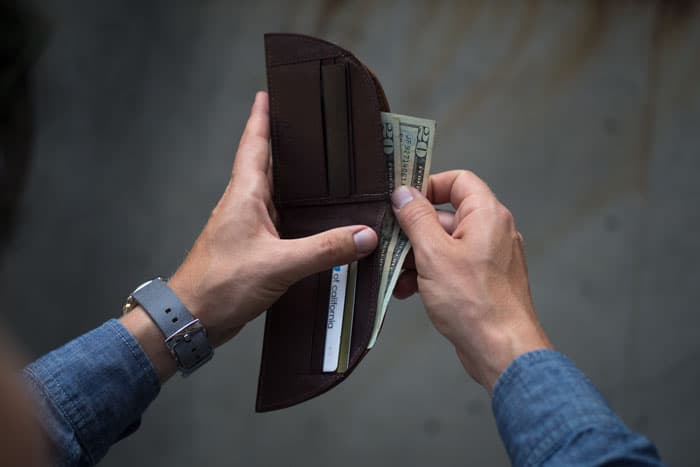 The solution to the Wallet Shuffle is clear: divest your physical assets, acquire crypto, and move to an intentional community that functions on the barter system.

Or try a front pocket wallet.

You could, of course, empty out your existing wallet to the bare essentials and rock that. But if you’re going to really give the front pocket lifestyle a fair shake, it helps to have the right equipment – a wallet designed to fit in your front pocket.

The aptly named Front Pocket Wallet from Rogue Industries is the internet’s answer to the Wallet Shuffle. Designed specifically for all-day front pocket carry, the Rogue wallet is the wallet you, your dad, and your granddad wish you’d been rocking all along.

The curved shape of the Rogue wallet isn’t a gimmick. In our testing, the curved section is the design feature that makes this wallet work – the curve removes the unsightly, uncomfortable bulge made by a traditional wallet in a front pocket.

At a quarter-inch thick, the wallet is large enough for multiple cards, cash, and some extras but is designed to minimize your overall wallet profile. If you want your wallet to be a super-hauler, this isn’t the model for you – and you probably shouldn’t carry it in your pants, anyway.

Rogue Industries is a small, family owned shop headquartered in Maine that clearly takes pride in the quality of their leathers. Our American-made moose leather wallet is supple, free of blemishes common to mass-produced wallets, and smelled fantastic. The stitching is excellent.

While Colorado bison is Rogue’s mainstay leather, they offer options in deerskin, football, and napa leathers as well as ballistic nylon. For the adventurous, there’s even stainless steel and tweed. 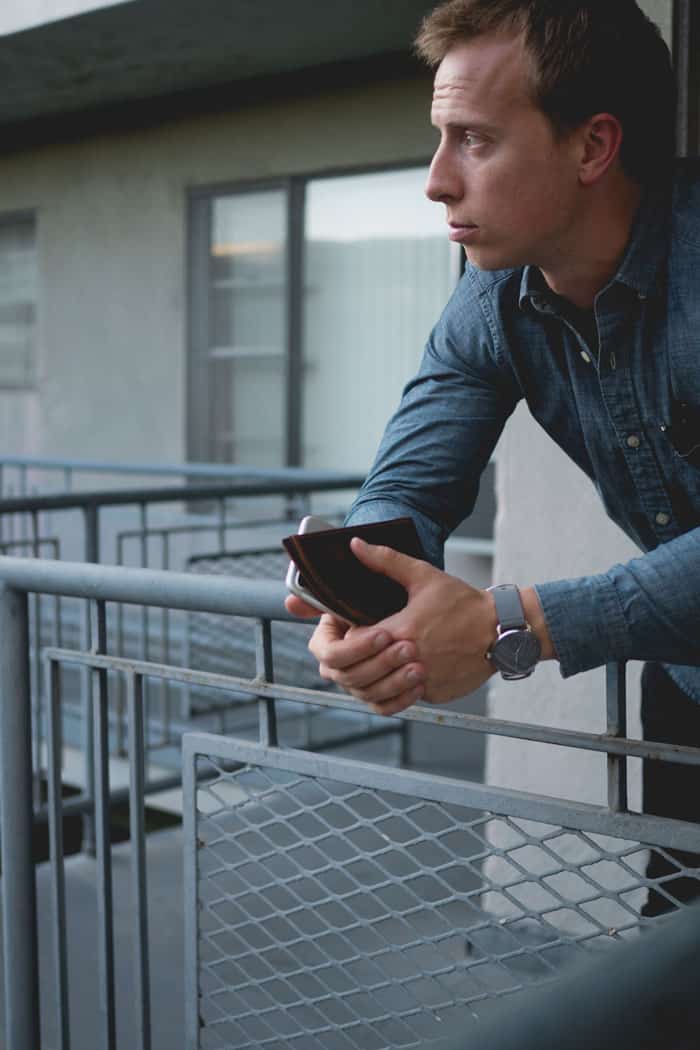 The combination of build quality and purposeful engineering made the classic Rogue Front Pocket wallet comfortable for all-day use and its slim size meant I wasn’t worried about a bulge in my front pocket.

Not having to do the Wallet Shuffle was awesome.

There is one drawback to adopting the Rogue – or any front carry wallet, in fact: hard choices. I’m accustomed to carrying a ton of cards, and even doubling up cards in a single slot. While the Rogue would certainly allow multiple cards in a single slot, it defeats the purpose of having piece of kit purpose-built to be slim and discreet.

Whether or not you opt for the Rogue Front Pocket Wallet, it’s worth slimming down your billfold and giving front carry a try – it saves your back and kills the Wallet Shuffle forever. Worth it.

For readers of Primer, Rogue Industries is offering 20% off sitewide, including their best-selling Bison Leather Wallet and Waxed Canvas Duffle. Simply enter the code “PRIMER20” at checkout, valid for 30 days!

StyleStyle EssentialsWallets
Discipline is a skill anyone can learn.
Cutting through the confusion: A breakdown of common knife terminology.
You don't have to be a traumatized father fighting a fungi-based zombie apocalypse to wear this jacket.
Did You Miss These?
4 easy steps...number 3 is a doozy.
Focus on being happy, just for today. Then do it again tomorrow.
In a time of uncertainty with a faltering economy and rising unemployment, you might think it's best to nail down a job, any job, no matter how demeaning answering phones or passing out mail seems. ... [more]
We've researched the best men's winter coats, based on material composition, product rating, and price.
Life can be overwhelming - Here's a proven method used by fighter pilots to make smart decisions fast and stay on top of it all.
And how to build them in under 30 days.
Do these now to keep your style strong and simple.
If you want to know how some rich actor gets in amazing shape, you're in the wrong place.
A look back as we gear up to move forward.