How to Survive a Conversation on Football: A Cheatsheet

Don't know sports? We'll give you the play-by-play.
7 October,2018By Justin Brown
This post may contain affiliate links, read about our editorial promise 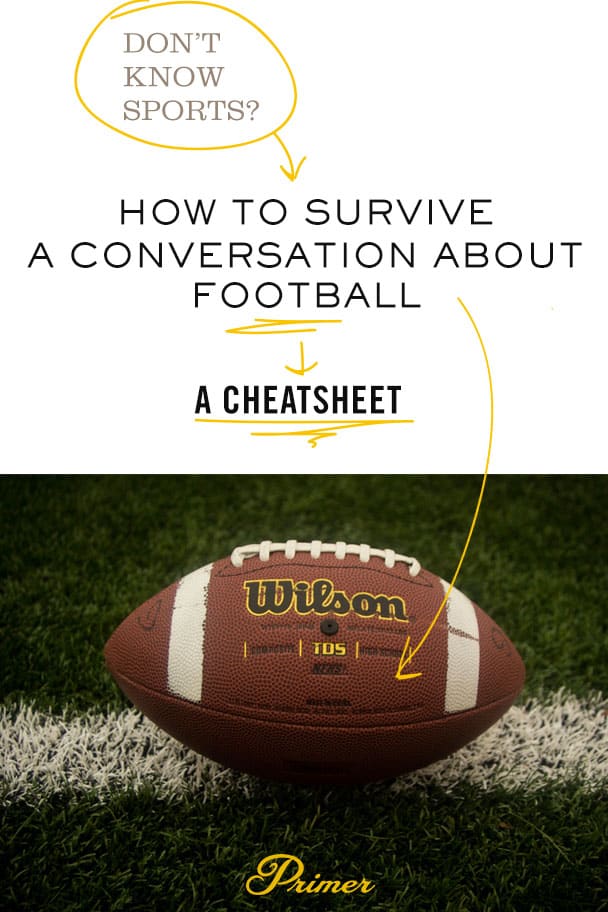 You're a person who doesn't follow sports. And you're fine with this unique wrinkle in your personality! But you have a job and a family. Colleagues and bosses. Friends and relatives. And a lot of them do follow sports. And at certain times of the year, social interaction is cranked up to 11. And one or more of these sports may be dominating any given conversation.

Suddenly, your non-interest is a conversational liability. But fear not: you're smart and capable enough to survive! You just need a crib sheet. That’s where we come in.

Use this guide and you'll be able to at least fake it in ANY social situation that requires a passing knowledge of the NFL. Print it out, transcribe it onto index cards, laminate it, hang it on your wall… however you want to learn, go ahead and learn. Just take it slow and keep your eye on the ball.

Team breakdown: 32 teams divided into two conferences (American and National), with four divisions in each conference

Name of championship/trophy: The Super Bowl – “The Vince Lombardi Trophy”

Biggest change from when you were a kid: the word “Fantasy” will come up in broadcasts at least five times per quarter, computer tablets are constantly used on sidelines, running backs are not nearly as important, the Chargers and Rams moved to Los Angeles

Staples of the game: tall fat guys who can run like gazelles, plays so unlikely to succeed that they are dubbed “Hail Marys,” and guys in full athletic gear getting paid a lot of money to do nothing but hold clipboards (backup quarterbacks)

Why you should watch: it's the most popular sport in the country, it never hurts to be mildly informed when making Super Bowl bets, those 10 minutes per game where players aren’t standing around or huddling can be pretty fascinating from a strategic standpoint

Most telling statistics you may not know about: DVOA (Defense-adjusted Value Over Average — measures a team's success on any given play based on points and yards gained/lost versus what statistically would have been expected to happen on that play when accounting for the down, distance, game situation & quality of the opponent) and Point Differential (basically, how many more points a team scores than its opponent — this can be helpful in determining whether a team’s win-loss record is actually indicative of their quality)

Commissioner: Roger Goodell, since 2006 – regarded as a disciplinarian who is often out of step with fans and regularly plays favorites (but even his favorites can change depending on the week)

Most titles in the last 25 years: Patriots (five), Broncos (three), and Giants/Packers/Ravens/Cowboys/Steelers (two)

Where you can watch, nationally: CBS, NBC, ESPN, Fox, and NFL Network

International influence: less than 1% — mostly from Canada, Germany, and England.

All-Star Game info: “The Pro Bowl” is held the weekend before the Super Bowl (late January or early February), in Orlando (it was previously held in Hawaii). Players and coaches generally do not take the game seriously and very few people pay any attention, at all.

Best places to see a game:

Living SmarterSports
Getting the perfect fit right off the rack is like winning the lottery. Whether you wear suits or selvedge denim, this guide demystifies the process of tailoring and alterations.
Discipline is a skill anyone can learn.
Cutting through the confusion: A breakdown of common knife terminology.
Did You Miss These?
Button up: Men have about a dozen types of shirt collars to choose from, each with their own advantages and considerations. We break them down.
A super easy exercise to give you the strength to "say no" to your cravings.
A jacket has two functions: Keep you warm, of course, and define the rest of your outfit.
You don't have to be a traumatized father fighting a fungi-based zombie apocalypse to wear this jacket.
We've researched the best men's winter coats, based on material composition, product rating, and price.
Life can be overwhelming - Here's a proven method used by fighter pilots to make smart decisions fast and stay on top of it all.
And how to build them in under 30 days.
Do these now to keep your style strong and simple.
If you want to know how some rich actor gets in amazing shape, you're in the wrong place.