sidebar_content
Skip to Main Navigation Skip to Content
12 May,2021
This post may contain affiliate links, read about our editorial promise

Photo from No Time to Die film poster.

Rough, rugged and one badass mother f$&@#r is what I think of when it comes to Daniel Craig.  The newest, and in my opinion, best James Bond since Connery, Craig brings out the darker side of James Bond that has never been seen before. With No Time to Die the next Bond movie coming out in October, he is going to be the it man this season. Daniel's portrayal is all about mystique along with his impeccable style wearing Armani and Tom Ford suits.

While his look appears sharp and effortless now, when it comes to his hair he has had many misses over the years.

Now that he’s older his strong, square chin and deeper “character lines” need some softening.  Daniel has a receding hairline and finer hair – much different from his youth.  A lot of men are self-conscious about their hair receding and feel like it's a non-stop train to losing it completely. But this isn’t the case, there are many products out there – Rogaine (topical) and Propecia (pill) are successful – but you have to use them daily and once you stop, your hair will continue receding. But, if the way of lotions and potions are not for you, don't despair, a receding hairline can be sexy. There are many ways to work around it that don’t involve a comb over. The number one worst thing you can do is try to fight against it. Many men assume if they cut their hair short, it will only make their balding more noticeable, but surprisingly the opposite is true. The longer your hair, the more pronounced your hairline becomes.

These days Daniel keeps his hair pretty much the same all the time so that it fits with the image he’s created.  As a hairstylist and the owner of Salon Mio Mio in San Francisco, I know a few things about the power a change in image can have for a man, both physically and emotionally. I believe it's important to experiment with your hair throughout your life and more importantly to listen to your hairstylist on what style will best fit you. We ask our financial planners what they recommend based on their years of experience, we should find a great barber or stylist and trust them in the same way. As we get older and more successful we need to look the part and the hair of our youth is no longer going to work for our big boy jobs and current hairline realities.

Let me break it down for Mr. Craig's hair.  When Daniel was younger he had his hair long, blonde and feathered which worked for the time. If you look at Daniel's latest hair style he keeps it short on the sides and textured on top. Texturizing is the process of cutting different groups of hair at different lengths, and can make fine hair look thicker. The different lengths and jagged pieces give the hair depth which, in turn, makes it look and feel fuller. There are various tools and techniques like thinning shears, straight razors, and point cutting with scissors that create texture. I use at least two of these techniques in every haircut. Knowing to utilize these methods and tools based on your specific hair sets your hairstylist apart from those who just cut hair.

Let's talk lingo…It's almost impossible for you to walk into a salon or barber shop and start speaking hairstylist/barber lingo because of the many different training methods. But, there is some fundamental language that all stylists can figure out whether they were taught the Vidal way, the Toni and Guy way or the Badda Bing Badda Boom School of Well You Know a Haircut way.  Explaining a shape is universal like square, rounded, asymmetrical, longer here, shorter here, clean cut or messy.

As stylists it's important to look at the shape of your head in order to create a haircut that works best for you.  If you’ve noticed why you look at someone and you think something's not right but you can't figure out why, it could be their haircut is fighting against the shape of the head. Daniel's is an oval shape, which tends to be the shape that most styles will work best with.  His haircut is a rounded cut rather the a square cut.

Imagine your head in a box and the sides of the box go straight up, like a Mad Man haircut or Hipster clipper cut, that's a square cut.  Think Don Draper or Sam Smith. As for a hipster, think short on the sides with a flattop or pompadour  Now, imagine the corners at the top of the box carved off, that is rounded. Daniel’s haircut is rounded towards the top of his head. This helps soften his lines and the squareness of his chin by counteracting the two. 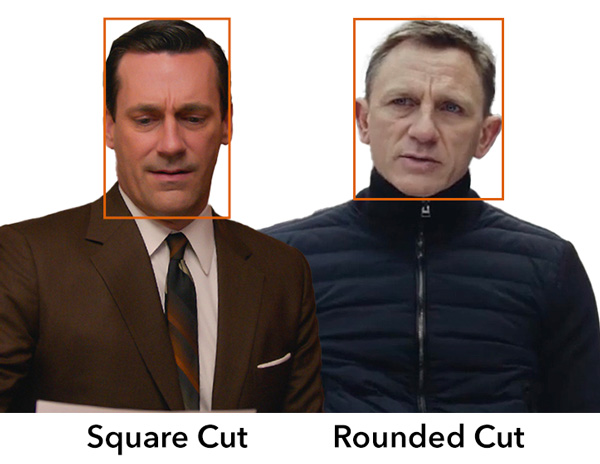 For clippers, Daniel’s hair seems to be a #2 or 1/4 of an inch clipper guard with a very short taper at the bottom. I always like some sort of taper, it looks more polished and put together. The sides and top are cut with scissors with a technique called “scissor over comb,” which is a technique that places the comb against your head while moving up and cutting in a rapid fashion to simulate clippers. This gives a softer look as to clippers that gives a sharper cleaner, more defined cut.

It can be worn messy, spiked up, or clean cut and parted to the side. Use a little American Crew Molding Clay ($13 or less) to hold your look and create a little shine.  Shine is in this year so embrace it and show your hair off. If you like a more matted look, then use Kevin Murphy Rough Rider ($25+) which my male clients love. See our breakdown of the best men's hairstyle products to see which is right for you.

→ Wondering how to cut your own hair for a similar cut? Check out our full guide!

Grooming & HairStyleSummer StyleThe Haircut
Fall is coming. Let’s be ready this year.
Author Brad Borland has a master’s degree in Kinesiology and is a natural drug-free bodybuilder, university lecturer, military veteran, cancer survivor, strength coach, husband, and father.
A new take on some familiar items.
Did You Miss These?
Start using science to get a consistent doneness with a delicious sear, with this method employed by top restaurants.
If 'casual' to you means old jeans and a baggy t-shirt, it means 'homeless look' to anyone who catches a glimpse of you. Keep up your appearance while staying comfortable and casual with these easy, ... [more]
Red goes with what? Fish? You can't serve what in what glass? Wine can be damn intimidating. We proudly introduce a new series that will give every beer and whiskey drinker out there an excellent ... [more]
The right book is to a man’s potential what gasoline is to fire.
Stylish enough for the office, tough enough for extreme conditions, smart enough for life.
The end of summer is nigh – Enjoy the long weekend and stock up on handsome fall gear.
Henry Ford didn’t drop in engines. Steve Jobs didn’t solder iPhones. Why are you trying to do everything yourself? Use our fool-proof guide for off-loading your workload so you can focus on what... [more]
Nail the elusive casual suit and be the most stylish man in the room without feeling out of place.
Love Killshots? Get a load of these.