sidebar_content
Skip to Main Navigation Skip to Content
Heavy dashes of aromatic and orange bitters take the sourness down a bit, and let the other flavors come through.
13 January,2021By Christopher Buecheler / Photos By Christopher Buecheler
This post may contain affiliate links, read about our editorial promise

My wife pointed out that I haven’t featured this drink here before, which is surprising. It’s not the best-known of pre-Prohibition drinks, but it may have the most far-flung roots, and it’s been tied to modern cocktail culture by famed bartender Audrey Saunders, who named her flagship cocktail bar after the original club.

The first Pegu Club was situated 40 miles inland along the Rangoon river in Burma (now the Yangon river in Myanmar). This beautiful country, bordered by Thailand, Laos, Bangladesh, and India, was conquered by the British during the era of colonialism in the mid-19th Century. The club was built in the 1880s for British military personnel and wasn’t open to the local population. It earned a great deal of fame, including a mention in Rudyard Kipling’s From Sea to Sea.

The Pegu Club’s house cocktail, a combination of gin, lime, and curacao, came to prominence in the 1920s and has lasted longer than the club itself, which by the 1970s, according to an anecdote from The Great Railway Bazaar by Paul Theroux, had become an Officers’ Mess for the Burmese army. The building still exists, severely run down, but the club itself is long gone. The drink remains, though it owes much of its return to prominence to the aforementioned Aubrey Sunders, who opened her New York-based Pegu Club in 2005. It’s a terrific bar, beautifully designed and decorated, with some of the best cocktails in the city, and I highly recommend it if you’re in the area.

The cocktail is simple to make and easy to adjust based on one’s tastes. Some recipes call for as little as a teaspoon of lime juice, while others suggest that the same amount of cuaracao and lime juice be used. I like to take the sourness down just a bit and let the other flavors come through, so I drop a quarter ounce of lime juice. I’m also generous with the bitters, using both aromatic and orange, with heavy dashes of each.

Like most sours, this drink is best prepared with fresh-squeezed citrus juice, shaken thoroughly, and consumed, as Harry Craddock once put it, “quickly, while it’s laughing at you.“ – meaning while it’s still mildly effervescent from all the shaking. You can garnish it with a lime wedge if you like, though I find that the presence of a lime wedge tends to tempt people into squeezing it into the drink, which is a balance-killing mistake. I serve it without a garnish. 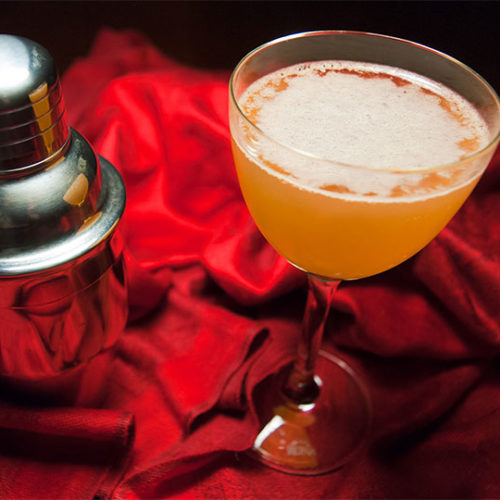 Cocktails & AlcoholIt’s Friday…Have a Drink
Great, dressier summer style at an attractive price.
Summer Wedding ✓Office ✓ Looking like Model ✓
Look forward to dressing sharp when it's sweltering.
Did You Miss These?
Start using science to get a consistent doneness with a delicious sear, with this method employed by top restaurants.
The most important, non-traditional guide to getting engaged you’ll ever read.
The budget-friendly cure for blank walls.
To master your life, you have to master yourself first.
Simple and very effective.
Add a new option to your rotation.
The best Father's Day gifts (that aren't a "#1 Dad" mug).
When you find a staple that works for you, upgrade to a version that features unique design details, premium materials, or sustainable construction.
Let's do summer on purpose.