sidebar_content
Skip to Main Navigation Skip to Content
Bitters are floated atop the foamy head as a garnish.
13 January,2021By Christopher Buecheler
This post may contain affiliate links, read about our editorial promise

Pisco is a clear-to-yellowish grape brandy made in Peru and Chile.  It’s not hard to find or expensive, but it doesn’t get used all too often in cocktails. That’s unfortunate, since it’s got a unique flavor that’s reminiscent of other brandies, but also has some un-aged rum notes going on.

There is one classic pisco cocktail, though: the pisco sour. This one’s got a few interesting things going on. For one, it uses an egg white. As I’ve mentioned in the past, that’s pretty safe, but if it freaks you out, you can use pasteurized egg whites, or omit it entirely.

It also uses bitters in an interesting manner: instead of being combined with the drink, they’re used as a garnish, dropped atop the foamy egg-white head and swirled around. It’s a cool effect and it gives the cocktail a highly aromatic scent.

This is a fairly low-alcohol drink. The Pisco’s 40% ABV, like vodka, but there’s only two ounces of it, and everything else in the drink is nonalcoholic (well, ok, the bitters add a minuscule amount). 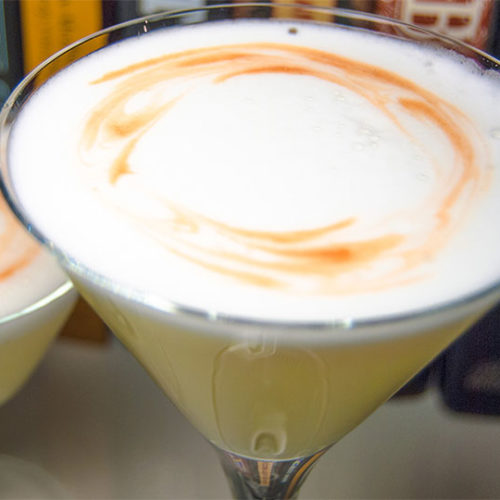 Cocktails & AlcoholIt’s Friday…Have a Drink
Lighten up your winter wardrobe.
Getting the perfect fit right off the rack is like winning the lottery. Whether you wear suits or selvedge denim, this guide demystifies the process of tailoring and alterations.
Discipline is a skill anyone can learn.
Did You Miss These?
Saying "thank you" with a big smile when you receive a gift or nice gesture may seem adequate enough but it's not. A gentleman always writes a thank you note. In these days of instant communication, ... [more]
No matter how safe of a driver you are, we all get stuck in the powder now and then.
To get what everyone else wants, you must do what no one else does.
Cutting through the confusion: A breakdown of common knife terminology.
You don't have to be a traumatized father fighting a fungi-based zombie apocalypse to wear this jacket.
We've researched the best men's winter coats, based on material composition, product rating, and price.
Life can be overwhelming - Here's a proven method used by fighter pilots to make smart decisions fast and stay on top of it all.
And how to build them in under 30 days.
Do these now to keep your style strong and simple.